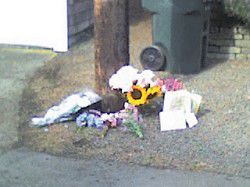 A small memorial appeared at the site of a plane crash that killed five people in Gearhart Tuesday.<br> PAMELA ROBEL - The Daily Astorian 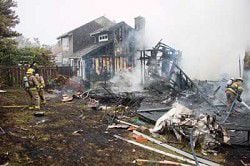 Photo of the Gearhart Fire Department

A section of a stone fireplace and some blackened studs are all that remained standing at 398 N. Marion Ave. in Gearhart after a single-engine plane crashed into the home. The explosion and ensuing flames spread to the historic home's northern neighbor.

A small memorial appeared at the site of a plane crash that killed five people in Gearhart Tuesday.<br> PAMELA ROBEL - The Daily Astorian

Photo of the Gearhart Fire Department

A section of a stone fireplace and some blackened studs are all that remained standing at 398 N. Marion Ave. in Gearhart after a single-engine plane crashed into the home. The explosion and ensuing flames spread to the historic home's northern neighbor.

GEARHART - The community was literally picking up the pieces today, in shock after the plane crash that took the lives of five people, including three children.

A paper gift bag with a candle, sunflowers and roses has been placed as a memorial at the base of a telephone pole next to the crash site, which is littered with rubble.

Pilot Jason Ketcheson and his passenger, Frank Toohey, were known and well-liked North Coast residents. Ketcheson had worked with Seaside city leaders for years on enhancements to the Seaside Airport. Toohey was a top executive at World Mark by Wyndham (formerly TrendWest) on the Seaside waterfront.

They were taking off on a business trip to Klamath Falls just after 6:30 a.m. Monday when their plane apparently got into trouble, hit some trees and plunged into a house and exploded.

Two families bore the brunt of the tragedy on the ground. Visitors from Beaverton and Denver had planned a two-week vacation at the beach. One couple lost two children, and another lost one (See related story, Page 7A). A surviving mother and two children are being treated for serious burns in a Portland hospital.

Stories about the crash and its aftermath are tinged with irony and Oregon links. Two children were grandchildren of former Oregon Attorney General Lee Johnson.

Dennis McNally, the Gearhart city administrator, found himself at the center of nationwide news attention. The story was the lead story on Netscape-AOL home pages by Monday night and on ABC news this morning.

He gave way to Van McKenny, an aerospace engineer from the Los Angeles Southwest Regional Office of the National Transportation Safety Board at this morning's briefing.

McKenny, an investigator for five years, said he is beginning the on-scene phase, looking at the aircraft and deciding whether the pilot's actions contributed to the cause.

"A crash like this with fire is difficult to determine (the cause)," he said.

"This number of fatalities is unusually high because of the ground fatalities," he said, before pausing. "It's tragic."

McKenny confimed that there is no flight data recorder for small planes and that flight plans are not required for a small plane taking off from an airport like Seaside.

He will be taking witness statements today and this week.

Reports of the sound of the engines and the weather at the time (it was foggy) are just a small aspects of the investigation, McKenny said. Most of the investigation will take place at the site, but he warned that a probe like this may take a minimum ofsix months to complete.

One advantage is that the engine is intact and there are pieces of wings remaining, even though they were sheared off the plane.

"The main fuselage has been completely destroyed by fire" he said.

McKenny arrived today and he said the Federal Aviation Administration, a representative of Cessna Corp. and the engine maker will be on scene for the investigation. Also two NTSB disaster assistance crew members will be arriving from Washington, D.C., for counseling for families.

Details of the intended flight of Jason Ketcheson remained sketchy Tuesday morning, one day after his rented airplane crashed into a Gearhart vacation home and killed several children sleeping inside.

He and his passenger, Frank Toohey, are dead after the aircraft hit a tree then smashed into the house. Area residents reported hearing an explosion that rocked their homes and left smoking airplane debris in nearby yards.

Federal Aviation Administration and National Transportation Safety Board authorities investigating the case have released no information on the accident's cause, but some local aviators wonder if weather played a role.

Ketcheson rented the plane from a Seaside company, Aviation Adventures, and departed the Seaside Municipal Airport early that morning, a mile or two southeast of the crash. Authorities said he was headed for Klamath Falls.

The destroyed 1969 Cessna 172 was Aviation Adventures' only aircraft, available for rentals as well as aerial tours of the North Coast. A Navy flight engineer, company owner Allen Sprague said he has 3,000 hours as a flight instructor. He said today he couldn't comment on what happened after he rented Ketcheson his plane.

Gearhart resident Eric Krask said Ketcheson may have been trying to loop back to the Seaside airport when he found himself in thick fog gathering above the ocean.

Krask flew with Delta for 35 years after working on the Marine Corps accident investigation board. His wife is also a retired Delta pilot.

On Monday morning he was checking the weather conditions online so he could go surfing, and noticed the ceiling was 300 feet at the Astoria airport. He said it seemed even lower - he guessed zero feet - out his back window, about a mile north of the Seaside airstrip. But a plane shouldn't take off from Seaside if clouds are lower than 1,000 feet, he said.

Although he didn't want to speculate, Krask said, "You make an illegal takeoff and run into complete fog, and the coincidence of an engine failure being a factor in that aircraft accident is really remote."

Ron Larsen of the Astoria Regional Airport said it's impossible to know what caused Ketcheson's crash.

"There's no way to tell," he said. "The FAA and National Transportation Safety Board I'm sure will be here to run a full investigation trying to determine what caused the accident. Anything else is just conjecture."

A former Coast Guard operations officer at Air Station Astoria, Larsen has been flying small aircraft for 40 to 45 years. He now flies a 1956 Beechcraft Bonanza but once owned a Cessna 172.

While both are single-engine four-seaters, the Cessna is a fixed-gear, high-wing model, and the Bonanza can retract its landing gear and has wings positioned lower on the aircraft.

Still, "a small plane is a small plane," Larsen said, describing the range of problems a pilot can encounter as similar to the scope of what can go wrong in a car.

"Lots of things can go wrong," he said. "You can become disoriented as a pilot, you can have some type of mechanical failure in the airplane - like I had a couple of weeks ago - and you can have anything in between." Larsen still doesn't know what caused the catastrophic engine failure that recently forced him to land in a Washington farmer's field.

One of the difficulties with Monday's crash is not knowing how Ketcheson planned to fly, Larsen said.

No one filed a flight plan at the Seaside Airport, where the last flight logged was Friday.

It's unclear whether one was filed separately with the Federal Aviation Administration.

Pilots must file flight plans in some circumstances, such as on instrument flights, when they're flying into clouds.

But they aren't required to give information on their route when staying clear of clouds, where they can see what they're doing.

On Monday morning, with cloudy, misty skies and low-lying clouds, "it wouldn't have been a very good morning trying to take off (visual flight rules) and trying to scud run," Larsen said.

Others felt the problem could have come from an aircraft flaw.

Robert Scoville of Tennessee became concerned about the Gearhart case after a Google tool alerted him to search terms he requested updates on: "sputtering engine" and "small airplane crash."

He keeps up on such cases on his Web site, sumpthis.com

Witnesses had reported hearing the Cessna sputter before the crash, which Scoville said could be a sign of undetectable water in the fuel tanks.

Cessna is one of the most popular manufacturers of small planes. The National Transportation Safety Board's accident database logged 890 incidents involving the Cessna 172 over the past five years, 128 of them fatal.

But Scoville said problems in the fuel system of some Cessna models undercut a pilot's ability to properly detect and drain water from the fuel tank before flying.

Officials inspect the charred remains of the historic Gearhart vacation rental Tuesday. The home at 398 N. Marion Ave. burnt down after a single-engine plane crashed and exploded, killing three children in the home as well as the airplane's two occupants.

See the tapes that could unravel a controversial mine project