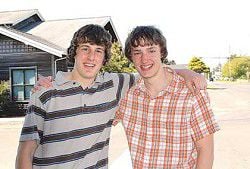 <I>KEVIN HEIMBIGNER photo</I><BR>Bryan and Alex Tarabochia will soon be stowing their gillnets used on the Columbia River and packing up for Columbia University in the borough of Manhattan, New York City. The twins graduated with Highest Honors from Ilwaco High School's Class of 2007. Bryan is leaning toward pre-law and Alex is set to study pre-medicine after both received scholarships to attend the prestigious "world" university. 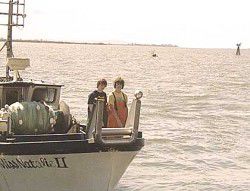 <I>Photo provided</I><BR>Alex and Bryan Tarabochia are on the bow of their bow-picker gillnet boat, Miss Natalie II, on the Columbia River. The pair will set sail for Columbia University in Manhattan next fall.

<I>KEVIN HEIMBIGNER photo</I><BR>Bryan and Alex Tarabochia will soon be stowing their gillnets used on the Columbia River and packing up for Columbia University in the borough of Manhattan, New York City. The twins graduated with Highest Honors from Ilwaco High School's Class of 2007. Bryan is leaning toward pre-law and Alex is set to study pre-medicine after both received scholarships to attend the prestigious "world" university.

<I>Photo provided</I><BR>Alex and Bryan Tarabochia are on the bow of their bow-picker gillnet boat, Miss Natalie II, on the Columbia River. The pair will set sail for Columbia University in Manhattan next fall.

ILWACO - "I can't remember a time when I wasn't fishing," Bryan Tarabochia says. "I used to wake up in the bow of the boat when I was three or four and be cranky because I wanted to be home," twin brother, Alex adds.

The Tarabochias have operated their own bow-picker gillnet boat on the Columbia River since they have been freshmen and now that they are members of the Ilwaco Class of 2007 they have set their sites on Columbia University in Manhattan. "I'll be able to go running in Central Park because our dorm will only be three blocks away," Bryan says. "I love the diversity of New York City, there's always so much to see," Alex chimes in, making it obvious the two fishermen are hooked on the excitement and range of possibilities in Manhattan.

The twins visited NYC three times on family vacations with their parents Joe and Cinnon Tarabochia. "The second time we were in Manhattan was a week before 9/11 and it was really weird to go back and not see the Twin Towers standing," Alex relates. "I did research about the best universities in Manhattan and found that Columbia was tops. I want to go into pre-med and maybe do cancer research."

Bryan, who is undecided but leaning toward a pre-law degree, says, "The city will be an education in itself, but the University is really laid back." Both Alex and Bryan are nearly straight-A students and both received academic scholarships to attend Columbia. "We were jumping up and down we were so excited when we got the letters saying we were accepted," Alex explains.

The Tarabochias have been jumping from behind the wheel to the bow to pick salmon since they began fishing the Columbia River when they were in grade school. "We fish the fall and spring seasons. Sometimes we fish from midnight until six in the morning and then get ready and go to school," Alex says. "Our older brother Matt is always fishing nearby, too." On one occasion Alex tells of Bryan falling in the river and Matt trying to pull him out and then falling in, as well. "They made it out OK, of course," he laughs. Marcy, Valerie, and Joey, Jr. are older siblings.

The twins fish Young's River once a year for about a week. "There are lots of snags and sometimes you have to get your net out fast or lose it," Alex explains. Bryan adds, "One time we almost hit the (Young's Bay) bridge and had to shove off with our hands." Halloween night of their sophomore year the Tarabochias were fishing the Columbia when a storm came up. "We got 130 Coho that night, which felt good, but it was also memorable for the waves the east wind kicked up," Bryan explains. "We do all right fishing and use the money for clothes and gas, things like that," Alex says.

Bryan, who is about a half hour older, and Alex have both done more than "all right" in their studies at IHS. Both earned highest honors and both have excelled in Knowledge Bowl and Pep Band. "Band is tops for us," Alex says. His favorite teachers are David Arney, Diana Wise, Roger Padgett and Marc Graton. "Math is a challenge for me." Bryan says, "I like math and English and Mr. (Tom) Trudell is also one of my favorite teachers." He also found time to wrestle his sophomore season.

During a fourth visit to NYC and first to the campus of Columbia, Alex observed, "Our culture coming from here is so much different. Other students thought that if we went out in the woods we would get killed. We had to tell them that it was just as safe in the woods as it is in New York." Bryan realizes, "Columbia is a world university, with students and faculty from all over."

As for the future, Alex says, "There are so many places I like, but I haven't ruled out coming back to the Pacific Northwest." Bryan says, "Whenever I have spent time away from home I realize what a beautiful place this is."

"I have no doubt that I can succeed in school, although I know the work will be difficult. I'm excited about the selection of classes and the changes I will make. I am not intimidated," Alex says. "I know school will be hard, but I'm willing to do whatever it takes," Bryan says confidently. Alex then talks of going to Broadway plays and Bryan wants to visit the many museums in NYC as Columbia students receive a discount pass.

From the time the two Ilwaco Fishermen grads were "hooked" on their first visits to Manhattan to the present, Alex and Bryan Tarabochia have been preparing to take a big bite out of the Big Apple and now they will have that opportunity. As for the twins doing any fishing while in New York, they laugh in unison, "We won't have time."