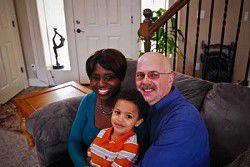 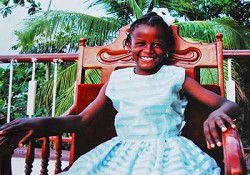 <I>Submitted photo</I><BR>Of all their relatives living in Haiti, they are still waiting to hear word on Jocelene's cousin Vanessa, living in Port-au-Prince at the time of the quake.

<I>Submitted photo</I><BR>Of all their relatives living in Haiti, they are still waiting to hear word on Jocelene's cousin Vanessa, living in Port-au-Prince at the time of the quake.

Like many of us, for the past two weeks the couple has been glued to television news channels, absorbing the heartbreaking aftermath of the recent 7.0-magnitude earthquake in the Caribbean country of Haiti. And while most Americans are tuning in to familiarize themselves with a country amidst such devastation, the Thomas household hangs on every news anchor's word, desperately waiting for any sign of good news on the island they consider a second home.

Sadly, the aforementioned sheet of paper kept in their kitchen is a list of Jocelene's friends, classmates and church group members who have been reported as dead.

"We sit here watching that devastation on TV and having been there and knowing what the buildings are like and having no communication," Jim said in the days following the Jan. 12 quake. "Looking at sheer numbers we knew the odds weren't good and that we would probably know people affected by this."

The country's capital city, Port-au-Prince, has been decimated to piles of rubble, leaving what is estimated to be millions of residents without means of shelter, clean water, food, medical care, electricity, or even proper burial options. Death toll estimates have been announced as being in the hundreds of thousands.

The couple met back in 2002, when Jim, a paramedic, was sent to Haiti with the Oregon Disaster Medical Team (ODMT) to work in a rural dispensary. Jocelene had just finished nursing school and had to fulfill one year of social service - similar to a college internship requirement - and ended working alongside Jim. And even though Jim was only able to volunteer one or two weeks at time, the pair developed a strong connection and he began to look for any opportunity to go back to Haiti for longer periods of time and as often as possible.

Jim says Haitians are very tight-knit, touchy-feely people who genuinely care for others. For example, a person from Haiti will expect an honest, detailed answer when they ask "How are you?" or "How is your family?" In Jocelene's home country, those questions aren't rhetorical or obligatory conversation - they really want to know.

"They are a caring, giving, warm people," he praises. "When I go to Haiti, I feel like I'm home."

Born and raised in Haiti for 28 years, Jocelene describes her hometown of Jeremie, a city on the peninsula just west of Port-au-Prince, as being very small. She says her country is full of "friendly, loving people. You really feel at home with the neighbors, families and friends."

The pair married in Haiti in 2004, and though there was a 14-month wait for Jocelene to receive her visa, Jim flew back to see her every three months. They recently moved from Astoria with their two-year-old son Brandon to a beautiful home in north Long Beach - what may seem at times like a world away from where they met.

But through a maze of phone calls, e-mails and text messages following the earthquake, the Thomas' have been reassured that Jocelene's mother, Yvrose, is safe in Jeremie, as are her siblings and some friends.

However, they're still waiting on word from Jocelene's cousins. Twelve-year-old Vanessa was living in Port-au-Prince at the time of the earthquake.

They also got word that one of Jocelene's friends was three months pregnant at the time of the earthquake and lost her baby.

Now keeping a close eye on aftershocks and reviewing disaster response coverage each day, Jocelene admits that she's angry with the Haitian government, whose decisions negatively impacted the country's condition before the earthquake arrived - no garbage service, limited electricity and little clean water.

"I never realized how dirty and poor it was there until after I moved here," she explains. "It breaks my heart, they have nothing ... It's really hard to see the help Haiti gets from other countries and see [the Haitian] government sit back and do nothing for the people. They never do anything ... Money is not being spent on what it was intended for."

Jim says Haitians have become accustomed to being let down and describes them as being very self-reliant, rather than expecting any sort of government assistance. When they build a home or business, it's a "pay as you go" plan. When the owner has the money to buy concrete or blocks, then he'll build a first floor. The second floor will come when more money is available.

"The primary building material is cement block, in varying quality, because some people make them to make money, and you never know what quality of concrete they will use," he confirms. "They don't use structural reinforcement. The ceiling of cement is only reinforced at the corners from what I've seen, and they use a smaller sized rebar than what we use here ... They're small block walls with no meaningful reinforcement."

Thus, the buildings in Port-au-Prince didn't stand a chance in the high magnitude earthquake, which was centered only 10 miles away and originated from only a few miles deep.

"Haiti is poor, but everything there that is shown on TV is the poorest place," she laments. "Haiti is a very beautiful place with beautiful people ... It's not only what they show on the news that is Haiti. We're poor, and we need help. But we're not hell! Anybody who's been there will be shocked by the poverty, but they fall in love with the country and the people. It's a misery, I know. But I'd like them to go to the other side of the country, with the beautiful beaches and beautiful resorts."

"I'd like Americans to remember that once the initial media blitz is over - one month from now, a year, two years from now - there will still be a tremendous need in Haiti, and places like Haiti. Everyone can help with just a $5 donation ... I hope this provides an opportunity to raise efforts to change why Haiti was the way it was, and give them proper infrastructure, medical care and clean water. I'm a strong believer in the saying, 'Give a man a fish and you feed him for a day. Teach a man to fish and you feed him for life.' We need to give people the knowledge and abilities to help themselves."

A few days ago, Jocelene mailed off her application to become a U.S. citizen, a title that she says she'll be proud to have. "I would be so proud to be American after what America has done for the Haitian people. I would like to thank everyone for what they've done. There are no words."

As they continue to watch their television for updates, Jim, who currently works for Medix, will be keeping his phone close by. There's a good possibility that his ODMT group will be sent to Haiti in February, and he hopes they are.

Former top Trump adviser: We are eating ourselves alive