The Tillotson "lighthouse" is a concern for some. 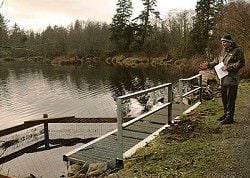 The Tillotson "lighthouse" is a concern for some.

HINES MARSH - Located north of Oysterville Road on the Long Beach Peninsula, Hines Marsh has made a miraculous recovery after being illegally drained in 1998 and inundated as far back as 1962 by a land developer who went bankrupt.

Through a North American Wetlands Conservation Act grant, The Trumpeter Swan Society installed a water control and fish ladder structure in 2001 that has created stability of Hines Marsh's hydrologic flow. The Columbia Land Trust has also been a key player in protecting and restoring the marsh, purchasing land there with financial aid from the Paul G. Allen Forest Protection Foundation.

The dozen or more trumpeter swans that have visited Hines Marsh this winter are proof that the efforts of many people can reclaim unique natural areas for now and for the future. A nature trail at Leadbetter Point State Park and Hines Marsh to the south will be named for Martha Jordan, whose work has been invaluable in restoring the marsh.

Hines Marsh is on Washington State Parks land and can be accessed through the "Lions Gate" owned by Leadbetter Farms approximately two and three-quarter miles north of Oysterville Road on Stackpole Road. Washington State Parks has an easement and visitors can simply walk around the Lions Gate and use the road to access the marsh and Parks land. A handicapped parking area and turnaround is planned to the west of Hines Marsh by the Parks Commission and should be in place during the next two-year state budget cycle.

The area supports over 25 sensitive habitat communities and species monitored by the Washington Department of Natural Resources Natural Heritage Program. The complex of fresh and saltwater wetlands on Leadbetter Point and Hines Marsh forms a habitat area recognized for its diversity and value to fish and wildlife.

Ocean front dunes, a mature Sitka spruce forest, marsh wetlands, and the proximity of upland forest to wetlands provide unique bird and wildlife habitat. Over 100 species of birds and otter, deer, elk and bear live in the area. Stackpole Slough at the marsh's outlet to Willapa Bay is also wintering habitat for Coho salmon smolts. The area is an important and unique biological interdunal "island" for wildlife and birds between Willapa Bay and the Pacific Ocean.

Hines Marsh and Leadbetter Point State Park are not without present ecological challenges, however. The Center for Environmental Law & Policy, an offshoot of the University of Washington School of Law, alleges concerns about a 124-foot high lighthouse-shaped water tower that was constructed on private land in the area. A man-made lake, six or more acres of irrigated lawn and pasture, and a number of residential units and accessory buildings with wells are also concerns put forth by CELP about the property owned by Leadbetter Farms.

CELP states that irrigation and man-made reservoirs require water permits under RCW 90.44.050 from Department of Ecology and that Leadbetter Farms lighthouse-like water tower and lake draws from the same groundwater supply as does Hines Marsh. CELP alleges the water tower houses living quarters, bathrooms, and a two-car garage and that there is an incongruity with the Washington State Environmental Policy Act. Pacific County approved the development and structures and their permits are on file with the Department of Community Development. CELP and TTSS say, "Our goal is to ensure that all environmental impacts to Hines Marsh and public interest values in the area are carefully considered."

Jordan concludes, "Hines Marsh is an area that needs to be shared. The more people that know about it and the more eyes that see it, the better Hines Marsh can be protected." Walking past the Lions Gate gives everyone the opportunity to do just that at the present time and handicap access and a nature trail will increase that openness in the future.