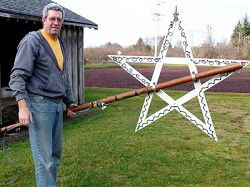 <I>CATE GABLE photos</I><BR>Bob Hamilton takes special care with his Christmas star that is on display at the family cranberry bog east of Seaview. "To get the lights just right, you have to put a staple on each side of the bulb," he says, pointing out the pattern from the front door of the pump house. "My dad always said, if it's worth doing, it's worth doing right." 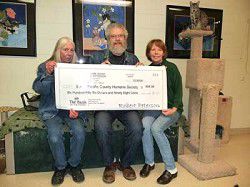 Bob and Mary Peterson of Surfside raised $656 in donations by people who visited their Christmas light display, which they in turn gave to the South Pacific County Humane Society, represented by Animal Shelter Director Diana Galbraith, left.

<I>CATE GABLE photos</I><BR>Bob Hamilton takes special care with his Christmas star that is on display at the family cranberry bog east of Seaview. "To get the lights just right, you have to put a staple on each side of the bulb," he says, pointing out the pattern from the front door of the pump house. "My dad always said, if it's worth doing, it's worth doing right."

Bob and Mary Peterson of Surfside raised $656 in donations by people who visited their Christmas light display, which they in turn gave to the South Pacific County Humane Society, represented by Animal Shelter Director Diana Galbraith, left.

These dark winter days were made brighter by a generous showing of holiday lights this season, assembled and installed by various citizens of the greater Peninsula community.

No community group did a better job than Chinook.

Chinook Lights Up Kathy Colvin, owner of the Chinook Coffee Company, and informal leader of the pack in the holiday lights department, shares, "All of Chinook should be congratulated."

"I think Chinook does the best job of any small community on holiday lights," Colvin avers.

Referring to the light display at the downright scintillating Coffee Company, she says, "We try to do something a little different every year."

Colvin explains their process, "We take Halloween decorations down right after that holiday and begin putting up Christmas lights - but we don't turn on all the lights until after Thanksgiving."

"We try to have everything ready, though," she says. "This year it was a challenge because of all of the storms and winds just before the holidays. We had a few less lighted figures because they just get blown down in the wind."

Chuck Whiteman, who works at the Port of Chinook, is the master decorator for the outside of Colvin's establishment.

"He won't want you to say that though," says Colvin laughingly, "because then everyone will want Chuck for their lights. He does such a great job!"

"I just couldn't do it all by myself because I have the inside and the outside to decorate," she continues, "So I let Chuck do the outside. I think it takes him about three or four afternoons."

"This year we did blue lights around the windows to honor the four police officers who were killed during the holidays," Colvin adds. "It was suggested online and I think we're going to do this every year now."

The Coffee Company was a decorator's dream with a pole tree of light strings, Santa and Rudolph, wrapped packages, swags and snowmen, amidst the rows and rows of colored lights covering the building like a gingerbread house.

Even the birdhouse condominium out front had its own light display.

Others Join InMany locals and tourists alike remarked on the fact that the south end of Chinook had an unusually good light show this year.

Traveling onto the Peninsula from Oregon or Washington Route 4 after dark meant being welcomed by several blocks of holiday illuminations.

Neighbors in the 700 block of State Route 101 went all out, and drivers were treated to many houses in a row with cheery Christmas lights and ornaments.

Virginia Wisner, Carole Moore and Esther Hansen's houses were all lit up with swags and garlands strung along white fences. Big red bows accented porches and pine trim, strung with lights of many varieties and colors. (During the day, snakes of extension cords coiled around the yards.)

At the end of the block, the Wirkkala home of Rob, Kim and kids was also part of the show.

"I figured if my elderly neighbors could put up lights, we could too," said Kim on her porch, decorated with a Christmas tree of lights as well as strings around the porch and into the yard.

At the other end of Chinook, Mary Jane Ward, owner of the Chinook Trailer Park pooh-poohed her annual decorating efforts, although every year her row of rhododendrons wear robes of lights that greet folks traveling from the north through Chinook.

"One of my long-time neighbors, Fred Warden, does the decorating," she says with a smile. "It is just too dark and gloomy during the winter months not to try to cheer folks up a little if you can."

"I guess people like our lights along the main highway," she adds.

They had just taken the lights down to store for another season.

A Star in the EastAnother stylish decorating effort takes place at Bob Hamilton and Karen Snyder's cranberry bog a quarter mile east of the light at Sandridge and Highway 101.

"We've got five acres in cranberries here - we bought the farm in 1994 - and I think we started decorating that same year," says Hamilton.

Their light show is one of elegant simplicity. Bob's pump house has bright white lights tacked around the perimeter of the roof, in geometrically and impressively straight lines, with one lone star perched on high.

"To get the lights just right, you have to put a staple on each side of the bulb," he says, pointing out the pattern from the front door of the pump house. "My dad always said, if it's worth doing, it's worth doing right."

"Karen and I talked about changing the lights, but a lot of people like just what we have, so we've left it alone," he says.

The five-pointed star is one Hamilton made himself. It is meticulously pieced together from slats of wood with small holes that the LED lights fit into. Each bulb is perfectly spaced with wires coiled neatly on the back.

"One light out is OK, but if you get two lights out, then the whole string needs to be replaced," he says.

"We've got good neighbors here - Charlotte Lawrence - who keeps an eye on the lights for us," he shares, "or sometimes people call if they see a light out."

"We like to have them lit up again in the morning for folks who might be going to work in the early hours when it's still dark," he says.

The star is mounted on the top of a two-inch aluminum pipe and fitted onto the apex of the roof with a metal bracket on the back of the pump house.

"We had to repair the roof a couple years ago and I needed to have the fellow make this to my specifications so we could install the star," Hamilton says.

His star design has been so popular that he has made a couple for friends. This past Saturday, Hamilton had his ladder out to take the star down until next year.

"I leave the lights on the roof, but the star comes down," he added.

Hamilton has one rule for lights, "They can't go up until after Thanksgiving, and they've got to come down just after New Year's."

Surfside Fantasia Bob and Mary Peterson have created a labor of love on their Surfside property at 29011 H street for the last three years.

Bob uses a special computer program to sequence a series of lights and shapes that are choreographed with a compilation of holiday songs from classical to pop to jazz.

"Setting this up every year, takes about two months out of my life," Bob says, "But so far it's been worth the effort."

Bob and Mary have a special affinity to the Humane Society animal shelter in Long Beach - Mary worked there as a volunteer before she took a job at the Ocean Park Area Chamber of Commerce - and their light show includes a donation box. The money they collect goes directly to the shelter.

"I've included something new every year so far," says Bob, "This year the arches were new."

The archways are a series of four lighted hoops with 48 lights in each one. Each light has three different colored bulbs, which makes for something like 16 million variations.

The lights, controlled by Bob's computer program, can blink on or off in specific patterns and colors depending on the rhythms and moods of the music.

Bob puts up and takes down all his lights every year. This year his show ran from Nov. 30 through Christmas eve starting around 5 p.m. until almost 9 p.m.

As each car pulls up, Santa Bob arrives with candy canes for every passenger - it's a way to greet everyone but he also has an ulterior motive: if 526 candy canes are gone, then 526 people came to the show.

"It was really cute to see the little kids come up and put a fist full of change into the box," says Mary. "There was over $30 dollars just in change from the kids."

Bob and Mary took the time to reappear at the South Pacific County Humane Shelter last week to present to shelter Director Diana Galbraith a "big check" with their donation.

Bob had made the check - a copy of the original regular-sized check they dropped off earlier in the week.

As they set up for the photo opportunity with Galbraith and various cats in the cat sanctuary, Mary said, "You better fold down the bottom of the check, Bob. We don't want everyone to know our bank account number."

Generous and practical, these two Christmas elves, who, along with all the folks mentioned above, made our holidays a little bit brighter.