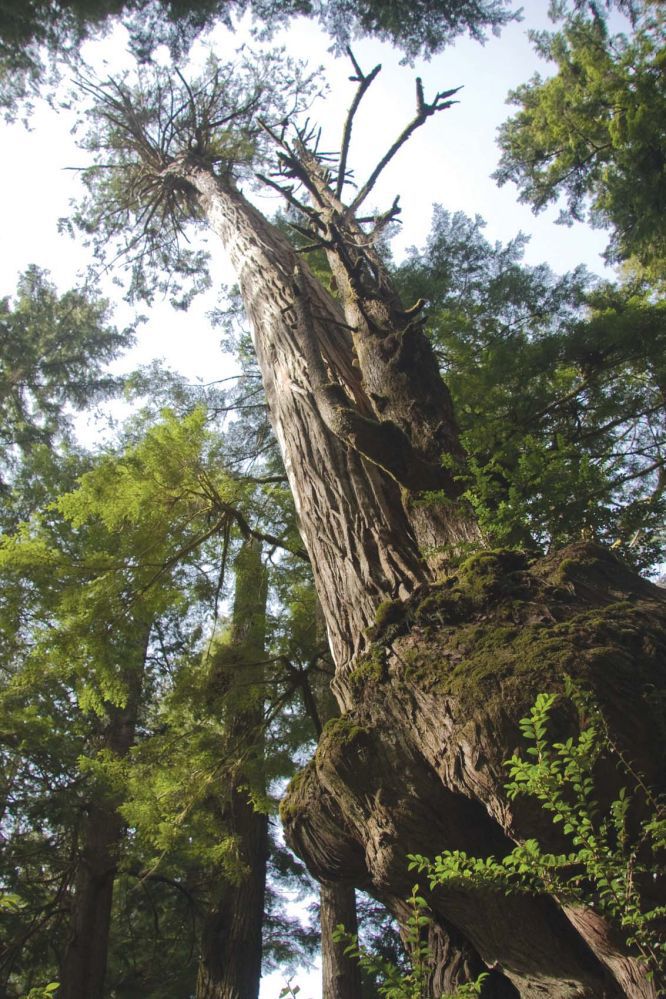 <p>An old growth western redcedar reaches toward the sun in the Don Bonker Cedar Grove on Long Island in Washington.</p>

<p>The prickly needles of the Sitka spruce make it easy to identify.</p>

<p>An old growth western redcedar reaches toward the sun in the Don Bonker Cedar Grove on Long Island in Washington.</p>

<p>The prickly needles of the Sitka spruce make it easy to identify.</p>

When they first arrived in the Pacific Northwest, European explorers described a forest unlike any they had ever seen: So thick it seemed impassable, so rich with diversity it mystified them and so vast it extended beyond the reach of their eyes  a boundless sea of evergreen. That old-growth Pacific Coast forest once encompassed an estimated 70 percent of land lying west of the Cascades, hosting the greatest variety of the Earths trees and its most enormous. Though the oldest and largest of these ancients fell to the axe long ago, here in the Columbia-Pacific, near the replanted slopes of that same great timberland, some of their descendants still take root around us.

With a keen eye and a little practice, these original locals are easy to identify and well worth the effort: After all, it would be a shame to miss the trees for all that forest.

A true lover of the nurturing Pacific mists, this rugged beauty seldom strays more than a few miles from the ocean and is the most prevalent conifer on our coast. Though an impressive 100 to 160 feet tall, the Sitka is recognized more by its bite than its height: The trees prickly 1-inch-long needles are bluish-green, flat enough that they wont roll readily between fingertips and extremely sharp to the touch. Its grayish-brown bark consists of large, loose scales, which fall away to reveal a deep, reddish-brown layer underneath. With shallow root systems, these trees can cling to cliffs and craggy sea stacks, and they are the favorite perch for bald eagles, who like to dine with a water view. Exceptionally strong for its light weight, the wood of this spruce is used in ladders and shelving, and its unique quality to resonate sound makes it valuable in violins, guitars and pianos.

Its unusual to be a legend in your own time, but if your life expectancy tops 1,000 years, your chances are better than average. Actually a member of the pine family, this state tree of Oregon is synonymous with the Northwest and is the most well-known. A leader in lumber (and Christmas trees), the Douglas-fir remains the backbone of the timber industry. Typically 80 to 100 feet tall, this tree is recognized by its bark, which is dark brown, cork-like and deeply grooved, growing to an amazing 10 inches thick. Its gray-green needles resemble the spruce but are not sharp and have two white bands on their undersides. Doug-firs wood is heavy, hard and strong, making it universally useful; native coastal tribes used the trees needles medicinally and then, as now, its limbs and bark were highly prized for firewood.

Though smaller, this abundant tree is often mistaken for its forest neighbor, the Douglas-fir, but close examination of the bark reveals a true identity: The hemlocks armor grows to only about an inch in thickness. For further distinction, look for a spray-like arrangement of flat, short, lustrous green needles growing in multiple lengths on every branch, and notice that the topmost growing tip of Washingtons state tree flaunts a distinctive droop to one side. Until the 1920s, the species was regarded by commercial foresters as a weed tree, but it is now recognized as being suited for many different applications, including a specific role as gymnasium flooring; its pulp is used in paper and as the fiber in rayon fabric, as well as some plastics. Coastal Native Americans boiled the bark in a treatment for hemorrhage, rheumatic fever and tuberculosis. Extremely rich in tannin, its long been a staple of the leather trade.

This was the tree most sacred to the native tribes of our Northwest coast: Prized for its majesty, its beauty and its many practical uses, they called it the Maker of Long Life, and revered every inch of its 180-foot frame. A redcedar dugout canoe could hold 40 people, and the bark could be used to weave baskets and clothing. Long planks created houses and totem poles, and all parts of the tree found some medicinal purpose. The trunk is reddish gray-brown, with long, vertical grooves and stringy bark that peels in thin strips; instead of needles, its fragrant, pale green leaves are scale-like, overlapping toward an inverted V-shape at each branchs end; small cones look like blooming, miniature roses. Today, this coastal classic is highly valued for its lumber, as well as its legendary grandeur and grace.

Supreme Court set to hand down major rulings in July