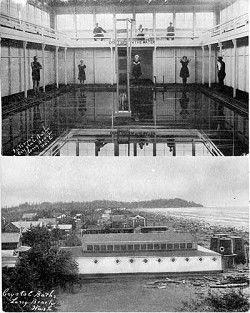 <I>ADELLE BEECHEY collection</I><BR>Early postcards show the inside and exterior of the swimming pool that was long a popular fixture on the Long Beach waterfront. A nearby site is one of several locations being eyed for a possible new town pool that would serve all Peninsula residents and guests. 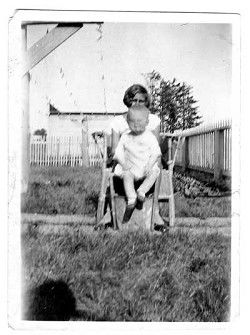 <I>ADELLE BEECHEY collection</I><BR>The author of this story poses with Wellington Marsh Jr., whose family were entrepreneurs in Long Beach, where they still operate their famous free museum.

<I>ADELLE BEECHEY collection</I><BR>Early postcards show the inside and exterior of the swimming pool that was long a popular fixture on the Long Beach waterfront. A nearby site is one of several locations being eyed for a possible new town pool that would serve all Peninsula residents and guests.

<I>ADELLE BEECHEY collection</I><BR>The author of this story poses with Wellington Marsh Jr., whose family were entrepreneurs in Long Beach, where they still operate their famous free museum.

PENINSULA - The news is out that Long Beach could have a new swimming pool! I say new, for many do not know that we had the first one. Verna Oller and I remembered it well, for we spent many happy hours there when we were children. She died recently and left a million dollars in her will towards building a new one. She wanted future children to have those same wonderful memories that we had.

Having a pool in those days was possible only because Long Beach was near enough to the ocean to take advantage of the tide. It was a great pool, regulation size, sturdily constructed of cement filled with sea water that was piped in and heated. As the beach widened out over time, and the tide no longer came close enough to the town, that beautiful pool had to be abandoned. There was no other way one could fill a pool. Each household had but a pitcher pump and getting enough water for daily use, washing clothes, and Saturday night baths was all that was possible. As a child I paid 25 cents to enter the pool. (It was more for adults.) I could rent a scratchy all wool Jansen swimsuit for 10 cents. The heady odor of moth balls was free! I usually brought my own.

That first pool was housed in a very tall building in the center of the town. The entrance was on the north side of where Stormin' Norman's is today. It had a high balcony, and those who did not swim could sit on benches there and watch those enjoying themselves below. A very high slide was in the center of the pool. I do not remember seeing anyone using it. It was, of course, out of reason for children, but adults avoided it as well. Walter and Eva Strahual were the owners and managers of the pool. They had one son, whom they called Charles. He was their pride and joy, and when he was a young man they indulged him in any way they could.

The newest fad on the market was an airplane, and of course he had one! It was a small plane, one that he could take off and land at low tide in front of his parents' house. He created quite a stir with it, for many local residents had not seen one before. To be able to have that close contact was very exciting and they flocked to the beach to watch him take off and land.

Charles Strahual was a handsome young man - even more so in his pilot attire - a soft black leather helmet with ear flaps, black leather jacket and high, leather boots - a costume all pilots wore. He turned many a female head!

When he was ready to take off he had to turn the propeller on the front of the plane over several times, something like starting a car in those days. Unfortunately, when he was in the process of doing just that, he was struck by the blades and killed.

When Walter and Eva Strahual were left with all that space over the pool, they decided to build a good floor and open a dance hall. People of all ages were involved in ballroom dancing at that time. They called it the "Pavilion" and every Saturday night during the summer months, people came from miles around to enjoy the music and dance. To provide the music, the Strahuals hired bands from the Portland area, but most of the time relied on our local band. Those members that I can remember were Hope Donaldson, Chauncy Davis, Chinook Observer editor Jimmy O'Neal and Max Wilson. They called the band "The Strollers."

On very special occasions the owners hired what were called big bands. I can remember Phil Harris and his band being here. He had the black comedian, "Rochester," with him, who was later on the Jack Benny show. At the end of summer they held one very special dance they called "The Tourist Ball." It was the one dance that brought many from the surrounding area to Long Beach.

When I was very young, Theodore and Lydia Jacobson built a tall sturdy building in Long Beach. (It is now an amusement center.) They operated a grocery store there on the lower level, and lived in the top story. When they passed away it was left to their only son, Earnest, and his wife Verna. They both grew up in Long Beach. Her maiden name was Verna Johnson, and they had one son, Earnest Jr. Later they separated and she moved to South Bend where she went into politics, and was Verna Jacobson, Pacific County auditor. In the meantime the Jacobsons had sold the building to Burt and Alex Sheir. The Sheir Brothers operated a store there for many years. At first it was a variety store, but later became a grocery store and meat market.

When the Sheir brothers first had the store, my mother took me there one day to purchase a pair of shoes to replace the ankle high, side buttoned, soft leather shoes I was outgrowing. They did not have much to offer, but I was happy, for I came away with shoes with laces, and I did not have to have what was called a button hook to get in and out of them.

Wellington Marsh Sr., and his wife, Harriet, had a restaurant in early Long Beach. It was the best restaurant in the area, and was a very busy place. Wellington was noted for his delicious clam chowder. I lived next door to the Marsh family, and on some occasions babysat their young son Wellington Jr. Long Beach was a very busy place then, but the old saying was, "After Labor Day one could shoot a cannon off down the main street and not hit a soul!" No people came on weekends as they do now. Those who had summer cottages closed them up completely, and did not come again until the following year. A few transient people came in for clam digging and cranberry picking, but other than that, hardy year-round residents never saw anyone from outside the area.

Closing up a cottage was not a very difficult task, for they had no indoor plumbing in most cases, and no special furnishings. In recent years, the reason most summer resorts have had good antique sales is because the owners brought down all the old furniture and household items they no longer had a use for. They now call them "antiques."

How RBG became the face of the Trump resistance

Tom Price on masks: This is not rocket science