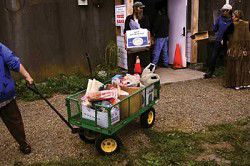 <I>DAMIAN?MULINIX/Chinook Observer</I><BR>Patrons of the Ilwaco Food Bank use a variety of methods to carry away their supplies from the organization's new building located in the back of a building accessible from Lake Street. 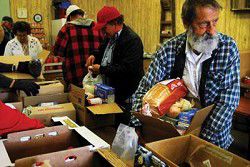 <I>DAMIAN?MULINIX/Chinook Observer</I><BR>Patrons of the Ilwaco Food Bank use a variety of methods to carry away their supplies from the organization's new building located in the back of a building accessible from Lake Street.

ILWACO - In a makeshift alleyway across from the Columbia-Pacific Heritage Museum on a Wednesday in downtown Ilwaco, a small group of folks are sorting items and lifting boxes - but they're not moving, they're getting food and other necessities ready for their clients. After all, the Ilwaco Food Bank and its volunteers moved in June to a building located by Martha Murfin and owned by Erik Fagerland.

After the Observer published a story exposing the condition of the food bank's space and the landlord's lack of proper maintenance, the Ilwaco Food Bank received an eviction notice in March. Around that time, Murfin had offered to deliver food donations from the high school down to the food bank, which at that time was located next to St. Vincent dePaul on Lake Street.

"This was during the winter, and I was aghast that I had to stand in there with water up to my ankles and rain dripping from above," she explains. "...It was degrading for the clients, too."

When volunteers told her that they didn't have any other options, Murfin, as the 90-year-old is often known to do for her community, set out to make a change.

"Having lived here forever, I remembered that the back ends of all the old buildings have a lot of space because they used to be grocery stores," she says. One day she stopped in at the drivers licensing building and asked the gentleman if he was using the entire building and if he would be supportive of a food bank operating out of the same building. He stated that he did have extra, unused space in the back and that he had also considered having it utilized by the food bank. After a tour through the building and speaking with Fagerland, a deal was made.

"Both of them just hopped in to see if they could help make it better - and the Fagerlands were extra cooperative," she adds.

Murfin's efforts and the Fagerlands' generosity have given way to a variety of appreciative feelings at the food bank.

"Now we actually have to take our coats off sometimes!" jokes volunteer Wilma Dorland as she takes a break from sorting boxes of food items.

"Yes - we have to shower before we come down here to work, instead of getting a shower when we get here!" volunteer Gail Moore laughs, referring to the numerous roof leaks at their last location.

Though the new rental is half the size of their old space, food storage is easier now that tarps are no longer needed to protect stored food from moisture. Separate circuit breakers were provided to power their three chest freezers; previously, Jessie's Ilwaco Fish Company stored much of the food bank's frozen items. Volunteers are also appreciating the option of heat, no cold drafts and running water - also things that weren't offered to them before.

Morale is high among these volunteers as they converse and laugh while sorting and stacking necessities, such as baby food, diapers, toilet paper, canned soups and vegetables, cereal, juice, vegetable oil, and a shopping cart full of potatoes. They've also begun collecting books to hand out to kids.

According to volunteer Rachel Gana, the food bank saw a 20 percent increase when the gas prices started rising. Now the client numbers are back to normal, but supplies are dwindling because donations are down and the suppliers don't have as much to go around.

Volunteer Richard Patana explains, "People can't always find an eight-hour a day job, a lot of people are working four or five hours each day to live," which results in less money available for necessities.

"Sometimes we're just helping people to make it to the end of the month," says Linda Crain, a volunteer who helps with computer tasks.

Recently the food bank received a $1,300 donation to buy non-food items, such as dish soap, body soap and toothpaste. And Jessie's is still an active partner by providing their forklift to help when a large delivery comes in.

"Anyone can come here [for help] - there's no income eligibility, no paperwork, we just need your address and the number of people in your family," Moore explains.

One dream of the future for the Ilwaco Food Bank is to create a community garden. The food bank receives three truckloads of food at the beginning of the month. But due to decreased storage space, they are not able to accept the large bins of produce as they did before. Now any fruit or vegetables are canned or in 50- to 100-pound bags.

Patana says they would also appreciate a donation of five sheets of 8-foot by 4-foot, 1-inch exterior plywood to make a stable area for trucks to unload when the winter weather comes.

What it means if Donald Trump loses the election