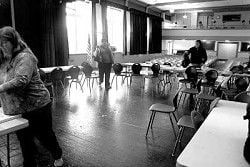 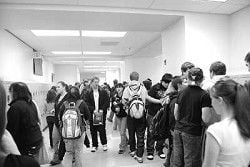 <I>ANNIKA WOLTERS photos</I><BR>Narrow, crowded hallways and pint-sized lockers are among the compromises that make the new Ilwaco High School building a challenge for students. Left: The auditorium stage must be used for classroom space.

<I>ANNIKA WOLTERS photos</I><BR>Narrow, crowded hallways and pint-sized lockers are among the compromises that make the new Ilwaco High School building a challenge for students. Left: The auditorium stage must be used for classroom space.

ILWACO - Ilwaco's new middle and high school looks just about perfect, but is it truly fitted for the needs of the students? There are a number of issues that say it does not meet all of the needs. Numerous complaints have been made about the school being too crowded, too melancholy, not having water fountains that work, not to mention that all of the electrical outlets are upside down. Comments like these make a person wonder if all the trouble and expense to remodel the building was even worth it.

Because Hilltop School was intended to be a middle school only, it is much smaller than what fits the basic needs of a seven to 12 school. Maybe one-third of the student body eats lunch in the cafeteria because of how small it is.

With lockers less than half the size they were at the previous school, there are more kids walking around with their backpacks on all day. Students who participate in sports have to ask a teacher to store their duffle bags and gear in the already stuffed classrooms for lack of locker space. And for the kids who do use their lockers, bending over in the crammed hallways to open the lower level lockers is simply impossible at certain times of the day.

There is a shortage of classrooms, causing many teachers to shuffle to find a room available to teach class and many classrooms are shared. The computer lab and library are always being used, even if the classes being taught do not require computers or books of any kind. At least three classes are held on the stage of the auditorium every day which makes it difficult when plays or concerts need to be set up and practiced. Often times, these classes are forced to resort to a study period in the balcony of the auditorium during rehearsals.

Perhaps the most discussed issue at Ilwaco High School is whether or not driving students should have to park their cars in the old parking lot down the hill. Students say no, faculty and residents surrounding Hilltop say absolutely. There have been several calls to the Long Beach Police Department by anonymous residents complaining about reckless driving and inconvenient parking.

Ignoring the "No Parking" signs, students are determined to park where they choose. How can you blame them when kids are liable to trip or fall when walking up and down the steep hill everyday in the rain and solid ice? The solution was made last year that students were promised a shuttle bus that would take them from the downhill parking lot up to the school. This shuttle has never materialized.

It is hard to get used to a newer and smaller school when it has been one broken promise after another. No doubt the administration has their reasons for what was done, but the facts are a school should be built around students' needs and the new Ilwaco Middle-High School comes up short.

Report of a 'souring' relationship between Trump and Giuliani