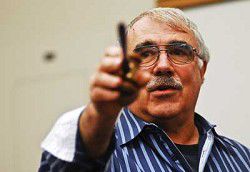 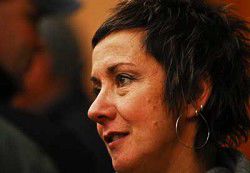 ILWACO - More than 50 members of the community - including county commissioners, school board members, Timberland Library representatives, port commissioners and hospital board members - filled up the Ilwaco Community Building meeting room Monday to get acquainted with the city's new four-person council and Mayor Mike Cassinelli.

Though the group was rubbing elbows, sipping punch and eating pieces of celebration cake, the night was a bit bittersweet as the news was just spreading about the city's most recent decision to cut three department positions and fire a city office worker.

"It's just like the county, we've had to cut back for budgetary reasons - it's not an easy task," Cassinelli explained at the end of the night. "We had a $147,000 budget shortfall before we looked at wages."

The mayor said the old administration cut the budget items necessary to keep the employees, and that the current administration looked at other options - such as giving up ownership of the water and sewer plants - before cutting jobs. But councilor Will Greene said selling the plants would result in drastic rate increases that would be forced upon citizens.

"There wasn't any other option," Greene lamented. "Debt service is the city's biggest entity, closely followed by insurance and benefits. And that resulted in an unfortunate loss of the three people."

When asked about the budget and job cuts, former mayor Doug Hubbard stated, "Without the numbers and information in front of me, I would rather not say a whole lot ... There were some budgetary constraints, the choice of people was totally up to Mike, so I don't know what the justification was for his choice of those people."

Cassinelli and Greene said the city's business plan is to "get ahead" by looking for loan consolidation for debt service on the sewer plant.

But amidst all the firing, there were two hires that night. During the regularly scheduled city council meeting, Cassinelli swore in the new city treasurer, Elaine McMillan, and the city council appointed Dustin Mead to the planning commission.

In council reports, Greene said the local ham radio group will be participating in the Jan. 23 beach cleanup. He also reported that the Ilwaco Food Bank is currently feeding approximately 150 families.

During public comment, Cathy Russ gave a presentation about the Economic Development Council.

Former police chief: Our profession is in crisis

Inside the DOJ's controversial data sweep

Six years ago, he was fleeing war. This year, he's competing at the Olympics