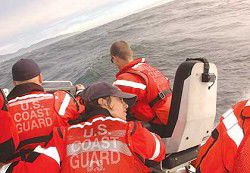 <I>KEVIN HEIMBIGNER photo</I><BR>Karinne Spethman monitors operations during hard chine drills where the Coast Guard's 47-foot motor lifeboats are tipped on their sides in 16-foot swells on the treacherous Columbia River bar. All part of the National Motor Lifeboat training she and 12 other USCG personnel took part in during late October. 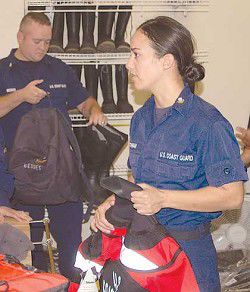 <I>KEVIN HEIMBIGNER photo</I><BR>Karinne Spethman inspects her gear on her first day at the Cape Disappointment Motor Lifeboat School. Spethman, who has been stationed at Portsmouth Harbor, N.H., for two years, said she felt, "Excited, anxious, and jet-lagged" as she prepared for her first visit to the Columbia River Bar.

<I>KEVIN HEIMBIGNER photo</I><BR>Karinne Spethman monitors operations during hard chine drills where the Coast Guard's 47-foot motor lifeboats are tipped on their sides in 16-foot swells on the treacherous Columbia River bar. All part of the National Motor Lifeboat training she and 12 other USCG personnel took part in during late October.

<I>KEVIN HEIMBIGNER photo</I><BR>Karinne Spethman inspects her gear on her first day at the Cape Disappointment Motor Lifeboat School. Spethman, who has been stationed at Portsmouth Harbor, N.H., for two years, said she felt, "Excited, anxious, and jet-lagged" as she prepared for her first visit to the Columbia River Bar.

CAPE DISAPPOINTMENT - Imagine a lithe, young woman who was a cheerleader at a small Catholic high school in San Diego and who is now at 28 years of age taking ballet lessons. She is a graduate of San Diego State University with a degree in law enforcement and her hobbies include reading and snowboarding. Karinne Spethman is that person.

Now imagine you are on a fishing boat off the coast of New Hampshire this winter. The evening temperature plummets to 10 degrees, with high winds driving the chill factor well below zero and your engine conks out. While your craft pitches helplessly in the icy Atlantic probably the last person you would expect to see coming to your aide at the wheel of a 47-foot motor lifeboat would be Spethman. But be assured, she is very qualified to rescue you as she was one of a dozen students who graduated Nov. 2 from the National Motor Lifeboat School (NMLBS) as heavy weather coxswains.

Spethman, who weighs in at a fit 115 pounds, has been in the Coast Guard for three years and has operated the 40,000-pound motor lifeboat for nearly a year at her home base in Portsmouth, N.H. near the Maine border. She has carried out "hundreds of towing missions, mostly of small pleasure craft." During the missions she is in charge of a crew of three or more Coast Guard personnel, including an engineer.

"We have rescued PIWs (persons in water). Towing boats in trouble is almost like I'm on autopilot, we do so many of them and we have recovered suicidal 'bridge jumpers.' Oftentimes the crew hasn't seen a dead body in the water, so I try to prepare them," Spethman explains.

One thing Spethman strives for is being prepared. "I applied for the NMLBS heavy weather class because I wanted to try something out of my comfort zone. I want to be prepared as quickly as possible to be able to cope with the New England weather and this school challenges you. I'm constantly learning about the boat and about my AOR (area of responsibility)."

Only a dozen students at a time are enrolled at the NMLBS at Cape Disappointment and a total of 72 students in six sessions are accepted out of the more than 150 applicants annually to the only school of its kind in the world. The students log well over 50 hours in the Pacific Ocean as operators of a "47" and are in the classroom for about as much time. They come from as far away as Canada and England. Each has to be recommended by their homeport commanders and the students have an average of at least two years of experience operating a "47" under their belts.

NMLBS Commanding Officer Rick Spencer says, "Over the years we have had almost a 100 percent graduation rate at our school. The students we get come highly recommended and are highly motivated. Our instructors are among the best in the world at what they do. I am proud to be a part of the motor life boat school at Cape D."

A major difference between the Long Beach Peninsula and Portsmouth is the rockiness of the New Hampshire coastline. "We have many small harbors and more small pleasure craft than larger commercial fishing boats. At low water it is eye-opening to see how rocky the channels are and how little room we actually have to operate in. It's important to be familiar with your AOR," Spethman said.

Another difference is the colder temperatures in the winter at her home port. "When the temperature drops below 20 degrees and the chill factor is zero or lower, I have to keep in mind the fatigue factor for my crew," Spethman relates. "Portsmouth is known for its fishing industry and for its history. I am only an hour from Boston, which is nice."

At home at the helmAfter overcoming jetlag the first day of NMLBS class, Spethman showed her mettle and skill in the coxswain's seat from the get-go. When she shouts to her crew on the stern, "Up on two" meaning she is going to increase speed on both of the 47s Detroit diesel engines, the three men don't think twice that a female is at the helm during towing drills.

Spethman deftly increases speed with ballet smoothness, yet with the power to overcome the 10 foot swells the Pacific is tossing at her. The male students and even the instructor operate the controls with more forcefulness, but Spethman seems totally in tune with her surroundings as she feathers the controls while backing up to shorten the tow line in one well-choreographed maneuver.

"I don't feel any added pressure to prove myself because I'm a female. I want to do my job to the best of my ability. I want to contribute," she humbly says. "I want to earn respect because I can do my duty. I have been treated very well in the Coast Guard. If someone opened a door for me, I'd feel a little awkward."

Upon completion of a classroom session on the sixth day the dozen students filed out to get into their survival gear. Spethman was the last in line. "See, they don't treat me like a lady, I'm just another student," she jokes.

Special survival gearSpethman's survival gear had to be special ordered as the standard USCG size-small suits "were just too big and bulky." Her accomplishments leave no doubt that her heart and courage are certainly in the extra large category, however. "My mother, step-dad and uncle are all homicide detectives in the San Diego area," she explains. While no doubt making for interesting conversation around the dinner table, that legacy is also apparent in Spethman's attention to detail and service.

"I like the Coast Guard because I have the opportunity to specialize and to see different parts of the country. I want to eventually get into officer candidate school and serve at least 20 years. I want to give as much to the agency that has already given me so much," Spethman concludes.

So when that fisherman in the Atlantic gets in trouble this winter, be assured that Karinne Spethman is not the best man for the job, but the best person. She has the grace of a ballerina, the mental toughness of a cop's kid and the expertise of a heavy weather coxswain. What swarthy sailor in dire straits could ask for more?

Reporter for The Atlantic 'scared' by Trump team discussions