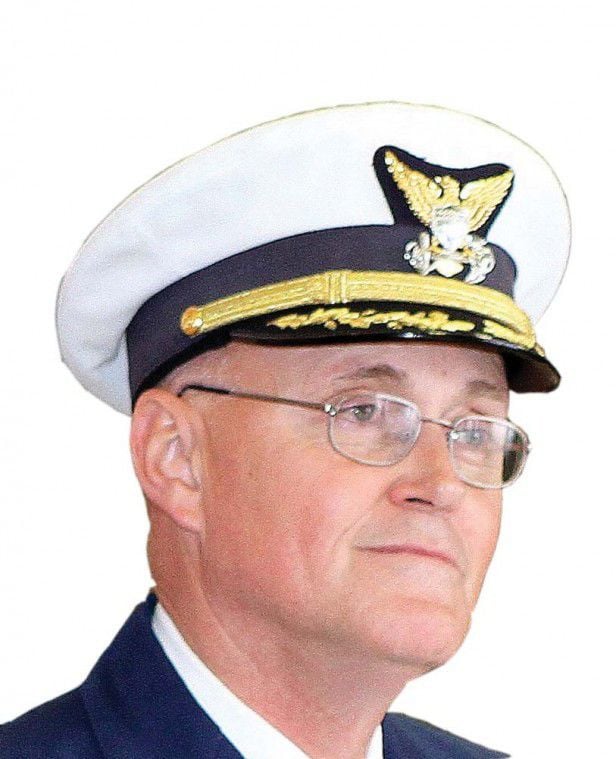 CAPT. DOUG KAUP "My time (here) was the absolute best days of my career." 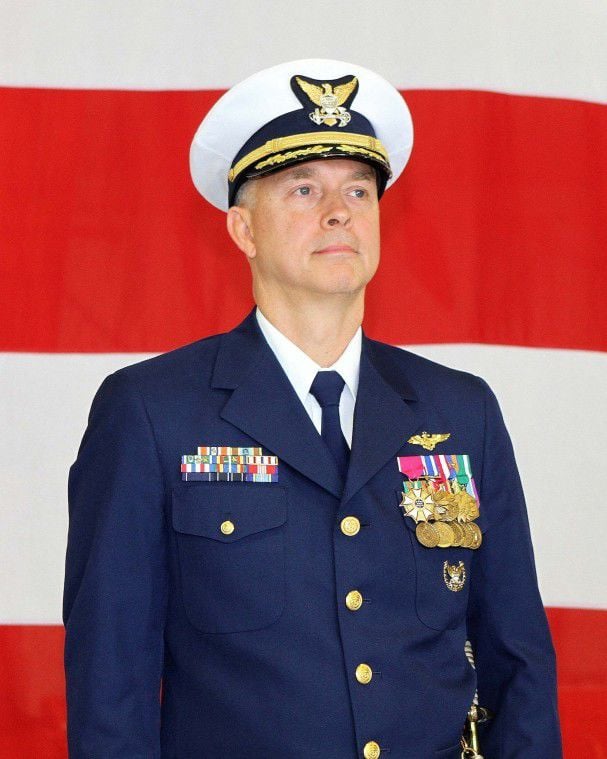 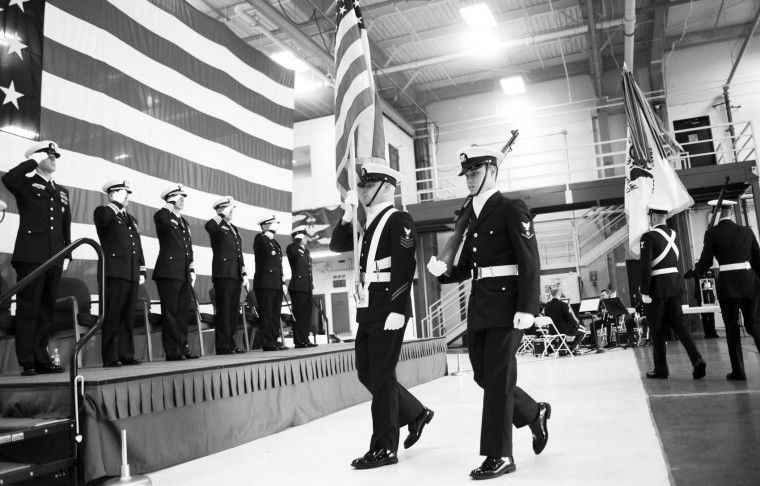 CAPT. DOUG KAUP "My time (here) was the absolute best days of my career."

As a respected leader and a skilled pilot for the U.S. Coast Guard, Kaup has enjoyed the ride so much heĀ’d do it over if he could.

Ā“My time ... working with the hundreds of professionals who maintain and fly our helicopters every day, were the absolute best days of my career,Ā” Kaup told a jam-packed crowd in the hangar at Air Station Astoria Thursday.

Ā  Ā Kaup said goodbye to the Coast Guard after a change of command ceremony, passing the reins to Capt. Bruce Jones, who comes to Lower Columbia from Coast Guard headquarters in Washington, D.C.

Ā  Ā After two years in Astoria, Kaup is retiring one year early because of health concerns. He leaves the Coast Guard with a firm imprint of integrity, a dogged work ethic and exceptional skill as a pilot, according to his peers and superiors.

Ā  Ā His contribution has been unforgettable, they say.

Ā  Ā As the commander of Sector Columbia River, Kaup has overseen almost 700 active duty, reserve and civilian personnel. He led the regionĀ’s transition from a geographically smaller group to a much larger sector, shifting oversight for shipping security away from Portland and placing it here at the riverĀ’s mouth.

It was a job that Kaup was hand-picked for, said Vice Adm. John Currier, chief of staff and commanding officer of Coast Guard Headquarters. Currier knew years ago, when he was heading up the Seattle-based 13th District, that Kaup would be the best person to handle the critical job because of the sensitivity needed to consolidate several sectors.

Ā“He was uniquely qualified to lead that effort,Ā” Currier said. Kaup can balance the jobĀ’s many moving parts Ā— from daily operations to marine safety and politics Ā— without compromising standards.

For at least the next three years, the Kaup family Ā— Doug, his wife, Debra, and their children Ā— will live in Astoria. TheyĀ’ve rented a house near Clatsop Community College so that their son Jacob can finish his last three years at Astoria High School.

His daughter Johanna, 18, will attend the University of Oregon in the fall, and his son Levi, 21, was attending CCC and is considering military service.

Looking back on his 31 years of military service, Kaup couldnĀ’t be more pleased with how it has gone.

Flying machines for a living has been both fun and rewarding, a dream career for Kaup.

Ā“Not everyone gets that in life, but I had it.Ā”

It all started when Kaup went to college. He grew up on the plains of Colorado near a town called Holyoke. He worked on his familyĀ’s wheat and dairy farm, and lived under a cow-milking regimen. That work before play outlook was an early factor in his later success.

Ā“I hated those cows. I wouldĀ’ve walked away from them if I could. But in the long run, it was a really good thing.Ā”

His folks couldnĀ’t afford tuition at Colorado State University, so he borrowed money to attend the first year. While there, he got an Army ROTC scholarship for the remaining three years, and served in the Army after graduating with a Bachelor of Science degree in industrial construction management in 1979.

His passion for flying hit him during a Reserve OfficersĀ’ Training Corps Ā field trip to Fort Carson, Colo., when he took a ride in a UH-1H helicopter, better known as a Ā“Huey.Ā”

He flew brand-new Blackhawks with the Army during his five-year commitment, traveling all over the world.

In 1986, after his time with the Army was up, Kaup thought heĀ’d go back to his familyĀ’s farm to work. Economic times were horrible, though, and while there, he applied and was chosen to be a direct commission aviator with the Coast Guard.

One good thing happened in Holyoke while he was there, however. He met his wife, Debra.

Since then, his career as a Coast Guard officer came together, always moving forward as Kaup took his family from one air station to the next, all over the country.

They often called the West Coast home, as Kaup served his first tour as a Coast Guard pilot in Humboldt Bay, Calif. Later he served a tour as the Alaska Patrol Division aeronautical engineering officer at Air Station Kodiak. After a tour at the Aviation Training Center in Mobile, Ala., and a 1998 masterĀ’s degree from the Krannert School of Business at Purdue University, he supervised the technical data programs for 25 air stations and 200 aircraft. He then returned to the West Coast and served as engineering officer and later, executive officer at Air Station Houston.

His first command was at Air Station North Bend and then, in 2004, he led Air Station San Francisco.

The exhilaration of flying

Flying will be one of the things Kaup will miss most after retirement. Through the years, he has been trained to fly several models of helicopters, most recently the MH-60 Jayhawk, while in Astoria.

He loves the feeling of being off the ground.

Saving people and protecting the environment made the job particularly rewarding, despite the inherent risks involved.

Ā“There were times when it was really challenging and, quite frankly, scary,Ā” Kaup said.

While pilots could be described as adrenalin junkies, they do tend to be disciplined and measured, he said.

Ā“They try to squeeze every bit of risk out of a mission beforehand,Ā” Kaup said.

Ā  Ā A tally of the lives Kaup has saved over the years might add up to more than 50, he guessed.

Ā  Ā He recalls flying an HH-65 Dolphin up against a 200-foot cliff in the Pribalof Islands of Alaska, hoisting two fishermen off a sinking ship. The wind was blasting into the sheer rock face just feet beyond the reach of the helicopterĀ’s blades, and the sea state was turbulent. While danger was all around him and closing in, Kaup kept his focus.

Sometimes, Debra Kaup didnĀ’t get all the details about how dangerous a mission was right away. Over the years, though, it becomes easier to handle, she said.

Ā“You kind of get used to it. You become confident in his flying ability,Ā” she said.

Pilots heĀ’s worked with through the years admire his accuracy and skill in the air. KaupĀ’s Ā“stick and rudderĀ” maneuvering is impressive, said Capt. Richard Kenin, the commander of Air Station Miami, Fla.

Ā“Doug is just a salt of the earth guy. We are certainly going to miss him.Ā”

In Houston, Kenin was the commander and Kaup was his executive officer. With honesty and integrity, Kaup had an ability to call things as they were, bringing out the best in other people, Kenin said.

Ā“He is the best executive officer I have ever known in the Coast Guard,Ā” he said. Ā“ThereĀ’s a sincerity about him that he truly cares about how people are doing.Ā”

Currier agreed. Kaup is able to talk to a group and relate to everyone effectively, from talking to enlisted personnel or pilots on the hangar deck to senators and governors.

Ā“No matter who heĀ’s speaking with, he has the ability to gain their trust,Ā” Currier said.

Kaup has a great sense of humor, too, many said.

Ā“He has a reputation for being a bit of a prankster,Ā” Currier said. Ā“But he is able to take it as well as give it.Ā”

That mix of natural leadership ability and technical ability impressed retired Capt. Scott Allen right away. The two worked together in the 1980s and mid-1990s at Air Station Humboldt Bay, the second time, where Allen was the commanding officer.

Ā“It was clear from the day I met him that he was bound for great things,Ā” Allen said. The Coast GuardĀ’s making a big mistake not making Kaup an admiral, he added.

Currier, the third guy down from the Coast GuardĀ’s top post, oversees thousands of people. Ā Ā“Doug is one of the very finest leaders IĀ’ve come across in my 35 years in service.Ā”

Sen. Collins: I do not believe systemic racism is a problem in Maine

See RuPaul and Cory Booker react to finding out they're cousins