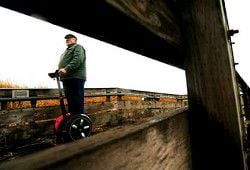 Prior to using his new Segway, former Ilwaco mayor Ed Leonard would have been hard pressed to walk the Long Beach Boardwalk, or anywhere else for that matter. "I can only stand for about 10 minutes at a time," he said. "But with this, I can ride around for hours." Segways remain upright using internal gyroscopes. 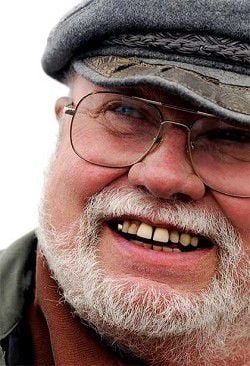 Prior to using his new Segway, former Ilwaco mayor Ed Leonard would have been hard pressed to walk the Long Beach Boardwalk, or anywhere else for that matter. "I can only stand for about 10 minutes at a time," he said. "But with this, I can ride around for hours." Segways remain upright using internal gyroscopes.

ILWACO - We all have seen him. Zooming along crosswalks, gliding down sidewalks and a few smooth turns here and there. We've seen him in Seaview, Ilwaco and even on a few local trails.

Though you might be pretty curious about former Ilwaco mayor Ed Leonard and his interesting gadget, you may not have had a chance to find out the scoop on his new toy - after all, sometimes he's just a little too quick to catch. So it's time to put the question to rest - just who is "the guy on that thing?"

The "thing," as Leonard's little ride has been called by many, is a Segway i180 - a Christmas gift from wife, Suzanne. Since its public introduction in 2001, the Segway offers 13 different models and is steadily gaining popularity for its unique concept of mobility and transportation. A 21st century version of an old-school push scooter, this compact vehicle is now responsible for bringing mobility to citizens who may otherwise not get to see what many of us often take for granted.

Managed by smart and complex circuit boards, the Segway is able to take orders from the rider through specified changes in movement, while maintaining a steady balance and preventing the possibility of falling. By leaning slightly forward, the Segway will glide ahead to a maximum of 12.5 miles per hour and by leaning back, the machine will roll in reverse. Turns are made by a slight move of a finger and by standing straight up, and the Segway will stop. If you happen to bump into something (or someone bumps into you) the "brain" senses it and makes the scooter stop.

"Most people I encounter are really curious," says Leonard. "I get a lot of strangers exclaiming 'Wow! That's cool!' I get to meet a variety of people when I ride about."

Though it may seem a little odd for it to possibly be comfortable riding along in a tilted forward position, Leonard says it has changed the way he sees things. Yes, when using his new mode of transport, he does stand eight-inches taller than usual, but the Segway has actually brought Leonard to places he never thought possible. With one hip replacement in the bag and possibly another replacement in the future, he says he has trouble even standing still for 10 minutes without pain. But with his new gadget, his body doesn't have to overcompensate in order to stay balanced. In fact, the second day he had it, he was able to see Lewis and Clark's bronze tree for the first time.

"This machine is truly brilliant - it does all the balancing for me," says Leonard, who recently used the scooter to shop in Portland's Lloyd Center for two hours. "It's absolutely intuitive, it rolls underneath you as you lean forward, just like walking. But it does take time to get used to it ... When you've been riding around on it for a couple hours, you really have to catch your balance when you step back onto the ground to walk."

Though the invention has provided mobility for Leonard and others, each Segway carries a price tag of around $5,000 and is not considered a handicap device, thus it cannot be covered by Medicare or insurance. But Leonard says that his doctor recommended that he use one, and he was able to write off a portion of the "human transporter" as a medical expense.

Besides being a fun gadget to play with, Segways' increasing popularity may be due to other added benefits, such as the fact that an 82-pound platform scooter is much more compact than any car and that it runs solely off a lithium-ion battery. Virtually silent, this eco-friendly ride can be charged from a household electrical outlet for several hours and can travel up to 24 miles on a full charge - which Leonard has equated to about 450 miles to a gallon of gas.

"But don't go downhill on a full charge," he laughs. "When it goes downhill, the battery starts to recharge - if it's already charged, then it can overheat itself!"

While Leonard primarily uses his Segway for recreational uses, in other parts of the world these entertaining rides are used for business purposes. According to Segway LLC, their machines can be spotted transporting security employees around airports, shopping malls, campuses and transit stations, as well as being used by city, fire and police departments.

Segways have also become a moving force behind charitable organizations, such as Segs 4 Vets - a public charity group that raises money to donate Segways to soldiers and Iraqi war veterans who have become immobile due to leg amputation.