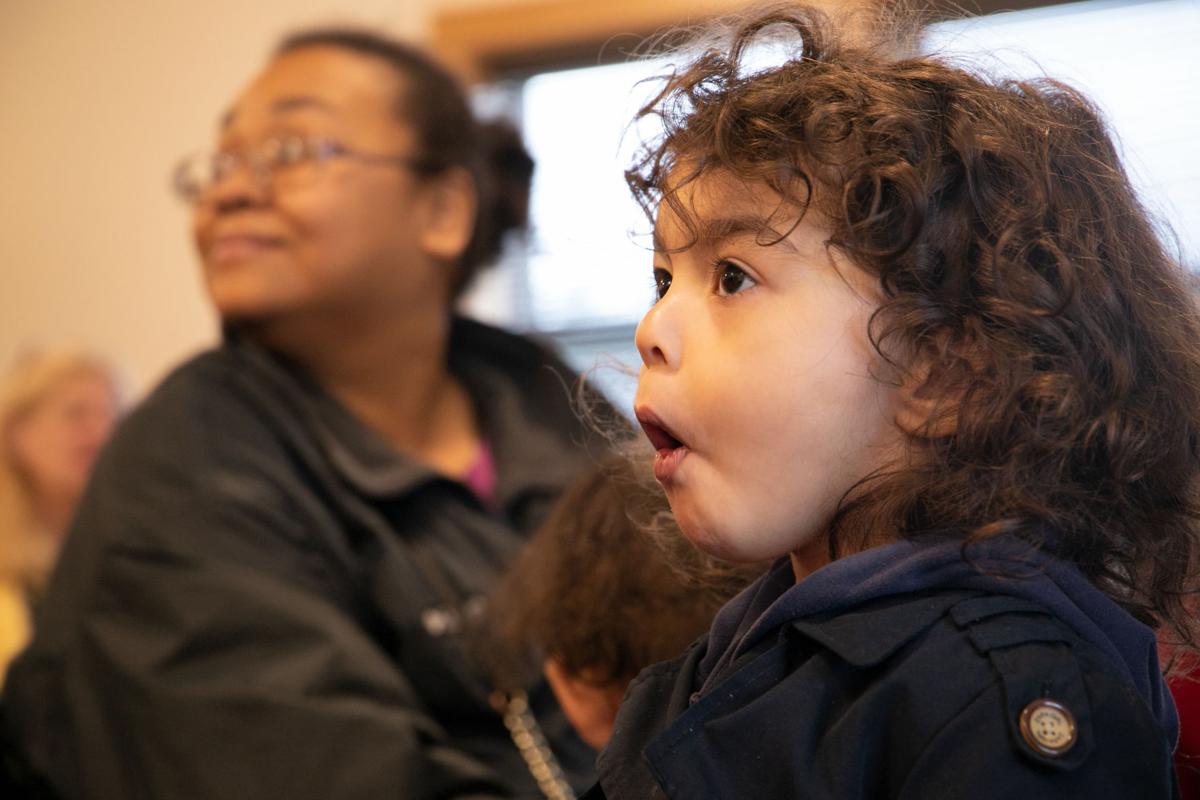 Seraphina Willey, 3, and her mom Rachel Willey shared their story of living in their car at the grand opening of the Driftwood Point Apartments on Jan. 23. 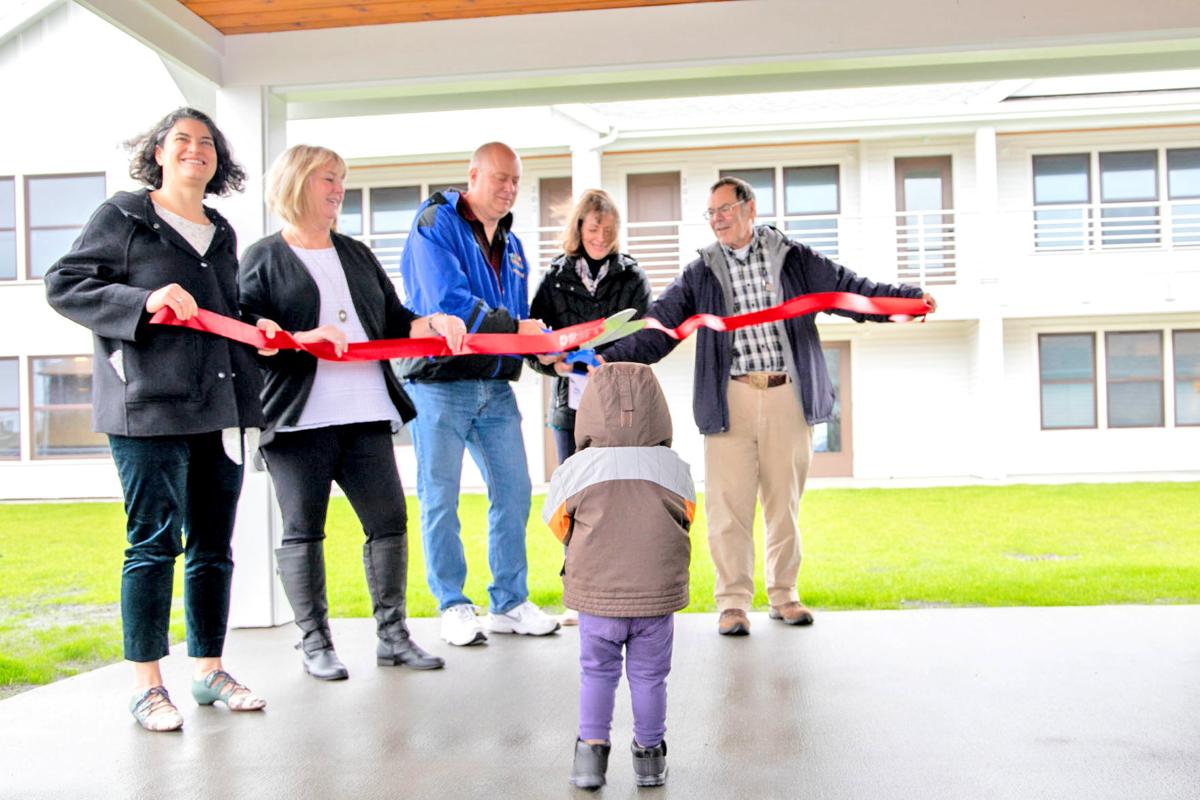 Seraphina Willey, 3, and her mom Rachel Willey shared their story of living in their car at the grand opening of the Driftwood Point Apartments on Jan. 23.

LONG BEACH — Moving into the Driftwood Point Apartment complex was like waking from a nightmare for Rachel Willey.

One of the families now living in the apartments are Rachel and Jeff Willey and their two toddlers, 3-year-old Seraphina and 2-year-old Josiah. Jeff Willey was working during the opening and couldn’t attend, but Rachel Willey shared the family’s story.

Before the family moved to Oregon, Jeff Willey had a good job working for Exide Technologies at a battery recycling plant in Nebraska City. The family lived in a suburb on the banks of the Missouri River. Then in mid-March 2019, flooding in the Midwest destroyed the highway Jeff Willey took to work each day. The New York Times dubbed it the Great Flood of 2019.

It affected more than 14 million people living in the Midwest. Jeff Willey’s commute became two and a half hours, Rachel Willey said.

Jeff Willey tried renting an apartment near the plant during the week, but that meant he had little time to spend with his wife, and their two toddlers. Then Jeff Willey heard about a job opportunity as a farm manager in Oregon.

They didn’t make the decision to move across the country lightly, Rachel Willey said.

“It seemed like a legitimate opportunity,” Rachel Willey said.

In August 2019, the family sold most of what they owned and began the long journey to Oregon.

But when the family arrived at the farm, it became clear it wasn’t a well-run operation. There was constant turnover and the woman running the farm was volatile. The housing the family was promised was run `down and didn’t have any heat.

The Willeys took another chance. Jeff Willey quit his job, using his last paycheck to buy the family a week in a hotel. He had solid work experience, Rachel Willey said. They expected he’d be able to find work quickly.

But without a college degree, Jeff Willey struggled to find jobs for which he was qualified. The family’s week in the hotel ended. And they began living in their car.

“You think that you’re a normal person until you aren’t,” Rachel Willey said.

Jeff Willey began taking day work, but the family was living on a tight budget. They would try to park near the construction sites he worked at, so they didn’t have to waste gas money. Two or three times a night, they would have to turn on the heat in the car to warm it up for their kids. And if a police officer came by, they would have to move the car, further depleting their gas supply.

When Rachel Willey had kids, she expected to be able to provide for them, she said. Her daughter Seraphina, turned 3 years old while the family was unsheltered. They celebrated at McDonald’s.

“I was handing out cupcakes to random kids, trying to get them to interact with her,” Willey said.

The family crossed over to Washington in hope of more job opportunities. One day, while they were out flying a sign and asking for help, cars began stopping and directing them to the Coastal Community Action Program offices.

Now connected with services, the family applied for Temporary Assistance for Needy Families, which gave them cash to keep gas in the car. Rachel Willey heard it took forever to get housing, and believed it would be a long wait. It was a surprise when they got the news they could move into Driftwood Point Apartments at the end of November.

“If we had that kind of money, we’d be staying in a hotel,” Rachel Willey said.

But the community came together for the Willeys. They put their story up on Facebook and Brown’s Coastal Market paid the deposit on the family’s apartment. And more people commented offering donations. When the family moved in, Peninsula Poverty Response furnished their apartment.

Jeff Willey is now employed and the family was able to pay rent for January with his wages.

“It’s incredible what the peninsula was able to do,” Willey said.

This February, the Pacific County Health Department counted 98 homeless individuals living in Pacific County, according to Katie Lindstrom, Health Department director. About 17 of those were children. Some live in RVs without utilities, cars and outside, according to the annual point-in-time count of sheltered and unsheltered homeless persons, a count mandated by state law and required by the U.S. Department of Housing and Urban Development.

“Rachel’s story was so touching,” said Jennifer Westerman, CEO of Housing Opportunities of Southwest Washington and executive director for the Joint Pacific County Housing Authority. “It makes all the long hours and stress that go into a project like this worth it.”

The complex had about seven vacancies on the day of the grand opening. The complex created 27 apartment units for low-income households. The units vary in size between one to three bedrooms. The complex also has a community center, a coin-operated laundry room and a meeting space.

The Driftwood Point project set aside 75 percent of its housing for homeless families with children, veterans and households that are disabled.

The project was a venture between the Joint Pacific County Housing Authority and Housing Opportunities of Southwest Washington. The units have income restrictions of 30 percent, 40 percent and 50 percent of Pacific County area median income. Some units will have rent cost restrictions since the property has received some funding through the Low Income Housing Tax Credit. The property accepts Section 8 housing choice vouchers.

The Joint Pacific County Housing Authority owns the parcel of land and funded the development of the project. The housing authority contracted with Housing Opportunities of Southwest Washington because of its experience developing low income housing.

People interested in applying can visit the Housing Opportunities of Southwest Washington website at longviewha.org/waiting-lists---apply.php. People can also reach out by phone at 360-423-0140.

'It’s incredible what the peninsula was able to do.'

Can schools reopen safely this fall?