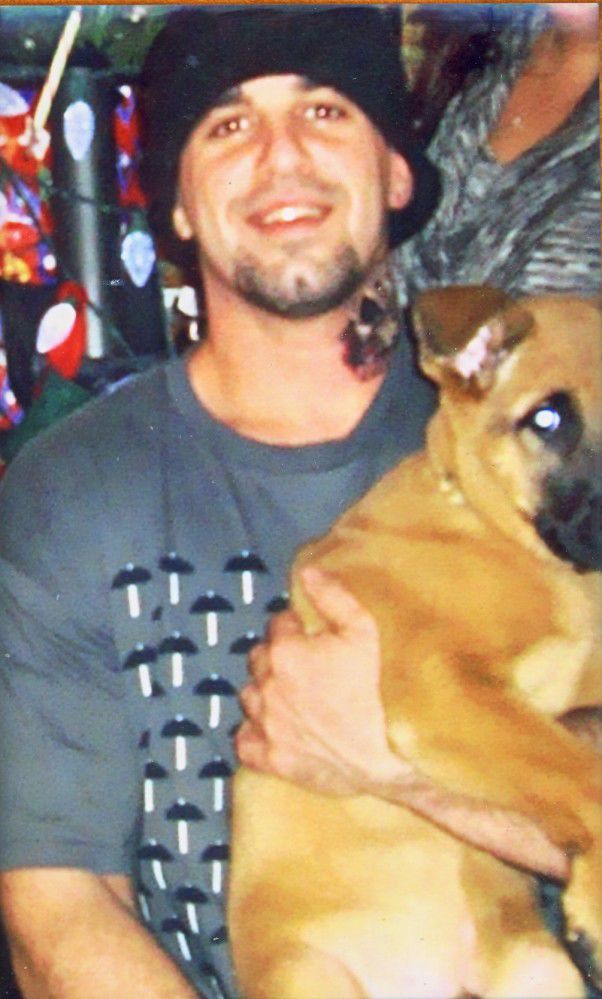 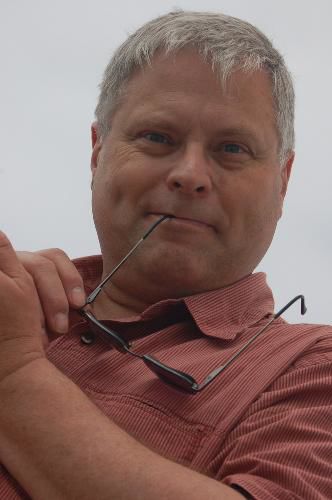 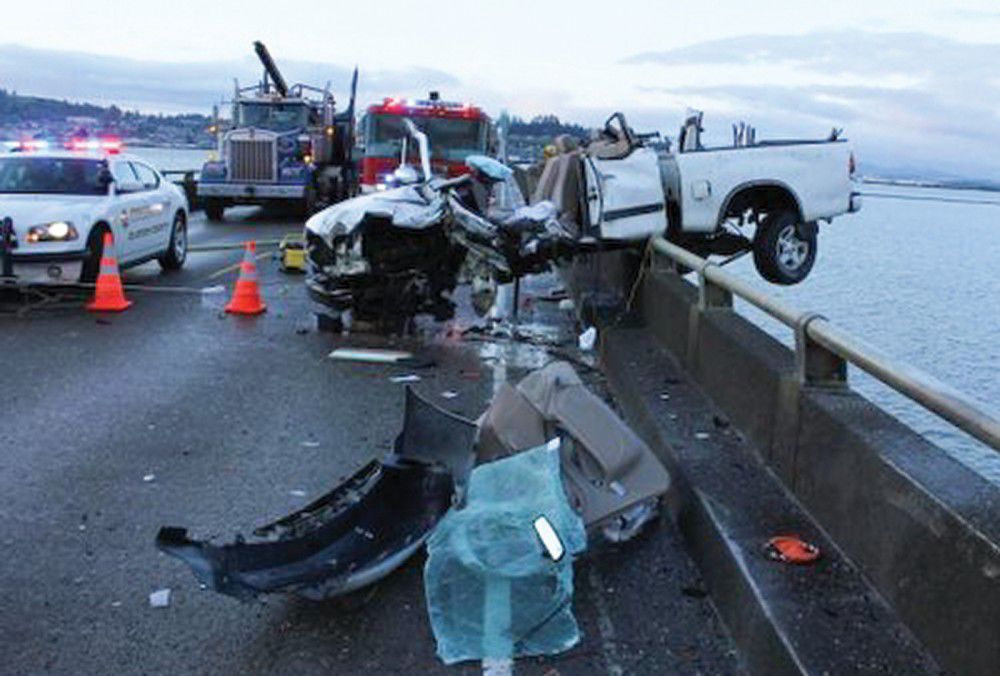 <p>This crash scene photo shows the damage to Levno’s vehicle, that was knocked halfway off the bridge during the collision.</p>

<p>This crash scene photo shows the damage to Levno’s vehicle, that was knocked halfway off the bridge during the collision.</p>

MEGLER?BRIDGE  One local man died and another is in intensive care after the two were involved in a tragic head-on collision in the middle of the Astoria Megler Bridge on May 2.

According to Oregon State Police Sgt. Andrew Merila, it was around 5:25 a.m. when a 2003 Hyundai four-door, driven by 27-year-old Nolan Neal Benson of Long Beach, was traveling northbound on the bridge when the vehicle crossed the centerline and collided head-on with a southbound 2003 Toyota pickup driven by Chris Levno, 57, also from the Peninsula.

After the impact, the pickup came to rest on top of the guardrail with Levno trapped inside. The Hyundai stopped in the traffic lane. Benson was pronounced dead at the scene.

Levno was freed from the truck after more than an hour, and was transported to Columbia Memorial Hospital. He was later transferred to Portlands Legacy Emanuel Medical Center with serious injuries.

In the past week, Levno has undergone surgeries to insert rods and plates in order to repair the lower body fractures he suffered in the crash.

Wednesday afternoon, a family journal entry on Levnos CaringBridge website read, Admitted to Emanuel Hospital this morning. Brought into the ER with multiple broken bones, one being a compound fracture. They took lots of X-rays and CT scans to check his whole body. Heres what we are being told at this point  he has a compression fracture of his spine in multiple places, his left femur has a spiral fracture (they put this one in traction immediately) his left tibia and fibula are broken and pressing against the skin and will need to be set immediately so the skin is not damaged, his right tibia and fibula were compound fractures that had to be cleaned out. Both ankles were dislocated and broken along with multiple foot and toe fractures on both feet. He has been awake through most of this and when we get to see him he is able to answer questions and tell us details about the accident.

On Friday, thy wrote, he had surgery today on the right tibia and fibula, they put a plate on the tibia. They then moved over and did a surgery on his left ankle to keep it in place while they fix his feet.

Low oxygen levels and fluid in his lungs led doctors to believe that Levno also suffered blunt force trauma to the chest during the accident. On Friday, he was placed on a ventilator.

Levnos daughter, Julie, wrote Monday, A lot of things are on hold until his lungs improve which actually had a bit of a decline today. They did take him to an MRI, which with the sedation and ventilator is a major ordeal right now. They are now telling us they think the issues with the lungs stem from blunt force trauma to the chest and then complicated by multiple surgeries and the inability to fully fill his lungs with air.

Ive tried very hard to keep this fairly factual but I must be honest today has been rough on us. They have been letting his sedation down a bit to so he can come to a bit. When he does his eyes open, but hes not there. Then he struggles with the ventilator. Its extremely hard to watch.

Levnos wife, Carolyn, wrote in a journal entry Sunday, As the love of my life it has been excruciating to go from kissing him goodbye at 4:40 a.m. May 2 to being in the ER where he could talk and told me about the accident to how he is now! For those who know me I love new knowledge however this is a class I would loved to have skipped. Again thanks for your support and words.

Levno works at the Georgia Pacific Mill in Wauna, Ore. He and Carolyn also own Re/Max Excellence in Long Beach and Ocean Park.

Updates on Levnos progress can be found on a CaringBridge webpage set up on his behalf:

Although the investigation is yet to be completed, troopers believe Benson may have fallen asleep, when he crossed the centerline and struck Levno.

He drifted over the centerline and we dont know why, said Sgt. Merila. There was no braking, no swerving, which is consistent to falling asleep.

Merila reported that blood and urine samples have been sent to the medical examiners office for toxicology testing. It will be about a month to conclude whether drugs or alcohol were a factor in the crash.

Benson worked in various capacities at Bensons by the Beach, the restaurant owned by his parents, Eric and Rhonda Benson.

Rhonda said of her son, He was a gentle boy who would never have wanted to hurt anybody.

The couple say their son had unmatched patience and could catch fish even with a bare hook. He also loved dogs and enjoyed digging razor clams.

Kevin Fink, Long Beach tattoo artist and a friend of Benson, remembered his Benson as a helpful friend who helped the Finks move into and paint their house. When he wasnt working, Benson was often working out at the gym. Fink said Benson was an avid angler who was in the midst of a fish-themed tattoo collection.

Nolan, he came new to the area, he reunited with his loving family, and he was a devoted son to his family, Fink explained. Long Beach lost a son. This guy was so neat, he had so many dreams and goals. I know he did a lot of work for elderly people and stuff. I know Tidy by the Sea was using him for different jobs and the elderly folks loved him. I spent time with the kid every day. Hed get off work every day and hed come by and talk about new tattoo designs.

Rhonda Benson said the family appreciates the support they have received from the community, such as providing them with meals and offering discounted lodging for visiting family members.

Its been a great community, she praised. Weve only been here four years, and its amazing the support weve gotten.

Benson is survived by his parents; brother and sister-in-law, Austin and Jamie Benson; and sister and brother-in-law, Kendra and Jared Treichel.

On Wednesday, the Benson family plans to get tattoos together to honor Nolan. They also hope to have a memorial bench installed by the restaurant.

A private memorial for Benson was held Monday at Bensons by the Beach; his urn reads, Gone fishin.

This might be your most important flu vaccine ever