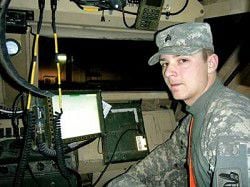 Brian Meyer in Iraq, where he served first as a truck commander in convoy security from Mosul to the Turkish border and later with a combat recovery team in quick response force. Meyer, a 2004 Ilwaco graduate, also volunteered and served a month in New Orleans after Hurricane Katrina.<I><BR>SUBMITTED?photo</I> 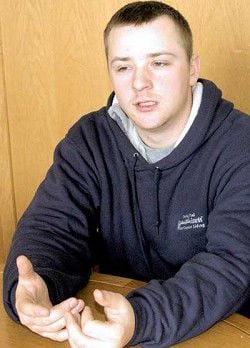 WE WERE UNDER MORTAR ATTACK ABOUT TWICE A MONTH ALL 10 MONTHS I WAS 'IN COUNTRY.'-ARMY NATIONAL GUARD RESERVIST BRIAN MEYER

Brian Meyer in Iraq, where he served first as a truck commander in convoy security from Mosul to the Turkish border and later with a combat recovery team in quick response force. Meyer, a 2004 Ilwaco graduate, also volunteered and served a month in New Orleans after Hurricane Katrina.<I><BR>SUBMITTED?photo</I>

WE WERE UNDER MORTAR ATTACK ABOUT TWICE A MONTH ALL 10 MONTHS I WAS 'IN COUNTRY.'-ARMY NATIONAL GUARD RESERVIST BRIAN MEYER

MOSUL, IRAQ - Brian Meyer learned his ABCs in first grade, but he fine-tuned the alphabet in Mosul, Iraq while deployed there as an Army National Guard reservist from October 2008 to July 2009. "IED, RPG, EFP" roll off Meyer's tongue like his ABCs did in grade school, and for good reason.

Meyer was shot at while trying to rescue a truck driver TCN (third country national, a local person), dodged RPGs (rocket-propelled grenades) and mortar fire at Bravo Battery in Mosul, and ran over an eight-pound IED (improvised explosive device) while in his gun truck escorting a 90-vehicle convoy near the Turkish border.

"We could see the tracer bullets coming in, which means there were three or four live rounds in front of them. We were rescuing a TCN driver that had been shot in the stomach by an insurgent," Meyer explains matter-of-factly. "He made it and the bullets didn't come that close to us."

He wasn't as lucky when an IED detonated "20 or 30 meters behind us." Meyer relates, "We had driven right over the eight-pound explosive, but didn't see it. Our vehicle was set up so cell phone communication was scrambled so the insurgents couldn't make it go off until we were beyond it. It exploded under a truck carrying supplies and broke the windows out and really shook up the local driver, but he was OK. The insurgents had buried the explosives too deep to kill anybody."

Meyer explains, "I didn't have time to be scared. I knew instantly it was an IED. Dirt and rocks hit me hard and the antenna for my BFT (Blue Force Transporter) computer was damaged so it said I was five miles from where I knew I was. I have never had an adrenaline rush like that. I cleared the area, recovered data about the explosion, and got the cell phone frequency the insurgent used to trigger the device. Fortunately there's nothing like dirt to insulate someone from a bomb."

At his base in Mosul, Meyer used the same principle to help sand bag the concrete buildings he stayed in. He says, "We were under mortar attack about twice a month all 10 months I was 'in country.' One night it sounded like someone was banging on the trash dumpster. I went outside to check it out and realized, 'Oh crap, there wasn't anyone around.' It turned out the insurgents had put a rocket launcher on a truck, taken off the wheels, and when it tipped over the rockets began spraying everywhere."

Meyer says calmly, "In a case like that you are as safe one place as another, but being in a bunker or a concrete building is better. The randomness of those kinds of attacks always scared me." He adds, "The enemy developed copper EFPs (explosive fire projectiles) designed to heat up and pierce our armored vehicles. So we developed plates a few inches below our rigs to stop them. We developed a SPARK (self-protection adaptive roller kit) system attached to a vehicle that went in front of us everywhere we went and swept up IEDs. The enemy started burying the bombs deeper, but then they aren't as effective."

Growing up Meyer lived in several places including Goldendale before settling at Ilwaco when he was a seventh grader. "We train in Yakima for two weeks every summer and that area and Goldendale are very similar to Iraq. I wasn't homesick at all because I was used to that type of country," Meyer says. "I enlisted my junior year of high school because I wasn't sure about what I wanted to do."

Meyer was a varsity baseball player at Ilwaco and worked for several years at Funland. "They treated me great there and I enjoyed the work. Baseball was tops, though. I like to golf now, but I'm horrible at it. I have always enjoyed video games. They help get my mind off things." Those skills have also helped Meyer with the technology to operate the equipment he uses to track convoys, search for those in need of rescue, and to perform under stressful situations when he was a TC (truck commander).

"My first duty in convoy security was leading a driver and gunner in one of 10 security vehicles in groups of 90 civilian trucks carrying anything from bottled water to food to gasoline. We would drive from two to six hours at 35 miles per hour, which was the optimum speed to detect IEDs. If sheep or a donkey got in our road, we tried to avoid them, but we didn't slow down as the enemy could be using the animals to make us easier targets."

Later Meyer was part of a QRF (quick response force) and CRT (combat recovery team). "If a vehicle was blown up, shot up, or broke down, we responded. There were five gun trucks, two medical vehicles, and a civilian and military tow truck for each of our missions. We were rolling in as little as 14 minutes from the time we got the call."

Meyer says, "When we arrived in Mosul it was called the most dangerous city on earth. There is garbage everywhere and it takes awhile to get used to the smell. There is a graveyard there that stretches for miles in the desert, but when it rains it floods it and it is terrible."

Meyer explains, "The only thing worse than the bugs are the pigeons. They are 100 times more messy than the seagulls here at the beach. You couldn't go anywhere without getting messed on."

During the devastation of Hurricane Katrina, Meyer volunteered and spent a month in New Orleans. "I couldn't believe it. Houses were lifted off their stays and moved blocks where they landed on top of other houses. We guarded against looting and helped the Red Cross. About the funniest thing I saw down there was an alligator eating a chimichanga from one of the drive-ins."

Meyer is studying criminal justice online and is working at Oman and Son in Long Beach when he is not training. "I want to learn as much as I can so I can volunteer and not be 'volun-told' what to do next." He enjoys the time off, but states with quiet conviction, "I have been bitten by the deployment bug. I was used to the work and to Iraq. Sometimes I was scared, but I've got to be honest and admit that the adrenalin and the excitement of the missions makes me want to go back and serve again."

Meyer is set to deploy to Afghanistan sometime in 2012. "I'll be on a Paladin 155mm Howitzer and it has a kill radius of 100 meters." The Paladin has a range of about 18 miles. "I've never been to Afghanistan, but I understand it is more mountainous and more dangerous than Iraq. I want to be ready."

So it's back to the alphabet for Meyer as state-side he is concentrating on AIT, MOS, and WLC to become a more effective NCO and more adept on the BFT and GPS so he can better serve as CRT and QRF. His biggest challenge is currently PT, but he's giving it his all to better serve his country and protect TCNs.

In other words Brian Meyer is taking "advanced individual training" in his "military occupation skills" and "warrior leadership course" so he can be a "non-commissioned officer." He is studying the "blue force transporter" and "global positioning systems" so he will be ready to lead a "combat recovery team" in "quick response force" to help "third country natives." He's working hard to pass the "physical training" that includes a timed two-mile run. "I'm not good at distance running. Hey, I'm a baseball player," he jokes.

Meyer concludes, "I re-enlisted once already so I will be getting out of the guard in 2015, but I'm seriously thinking of enlisting one more time and getting my 20 years in for retirement. I think it is important for people to know that all of us in the Army National Guard volunteer. We serve because we want to."

Voting laws in every state

US still in first wave of pandemic