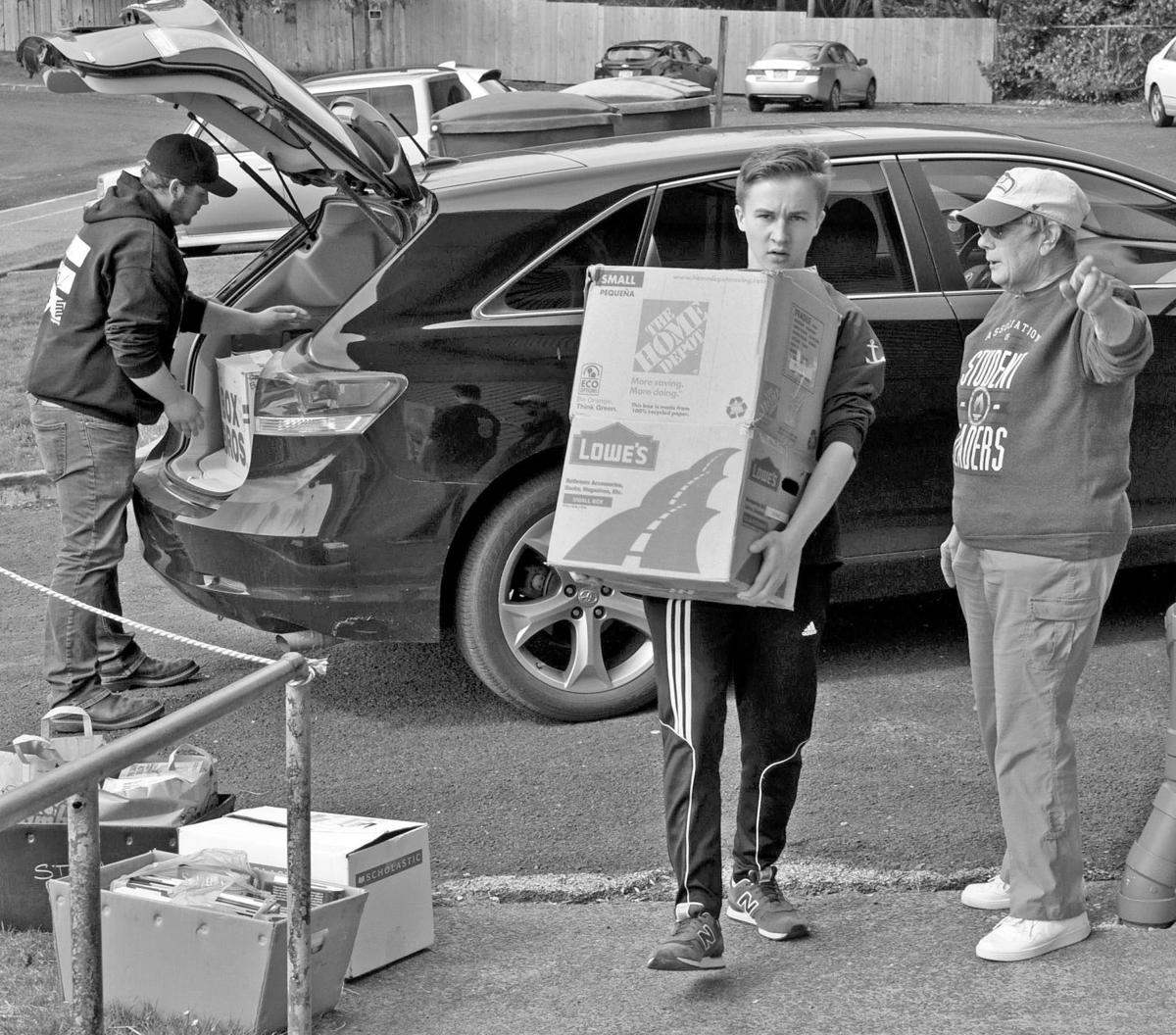 German foreign exchange student Christian Gottwald takes directions from Friends of the Library President Sandy Stonebreaker, right, as he lugs a big box of books into the building sorting area. IHS students regularly assist the “Friends,” when they see a vehicle pull up and an opened trunk revealing boxes of donated books. Student Carson Moore also helped with this load. 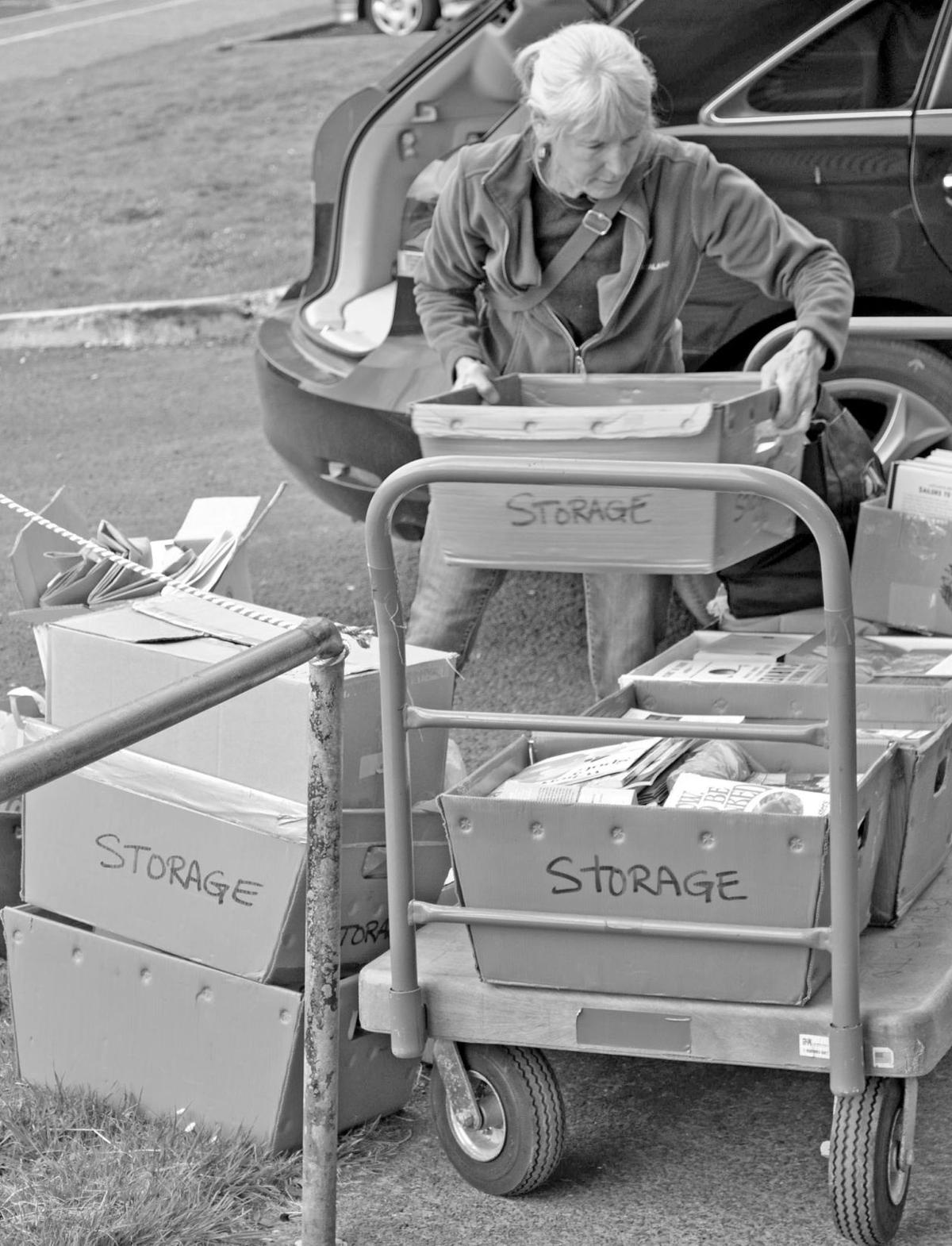 German foreign exchange student Christian Gottwald takes directions from Friends of the Library President Sandy Stonebreaker, right, as he lugs a big box of books into the building sorting area. IHS students regularly assist the “Friends,” when they see a vehicle pull up and an opened trunk revealing boxes of donated books. Student Carson Moore also helped with this load.

ILWACO — Friends of the Library President Sandy Stonebreaker said during a book-sorting session last Friday at Ilwaco High School that they’re down from 11 board members to six. They’re on the hunt for more.

Because the Friends sort and sell thousands of books for their two yearly sales, Stonebreaker’s typical dry wit describes the perfect board member a big-muscled person who owns a pickup truck. She continued, admitting the job does sometimes take strength, but is not particularly hectic. In fact, she said, “We’re so low key, they have to take our pulse.”

Some of the board members over time have been as much as eight decades old and not able to hustle much. If they’re not yet eligible for Medicare, Stonebreaker, who is pushing 79, calls them “kids.” There’s no age restriction. The desire to help is all it takes.

The impact this group has on the two Peninsula library branches — Ocean Park and Ilwaco — should not be taken with a grain of salt. Big boxes of donated books, collected year around, sorted and then sold at two sales — Memorial Day and Labor Day — mean big, important bucks.

Stonebreaker said the Friends, “Put $70,000 in to Ocean Park (Library.) We bought all the lighted shelving there.”

Friends paid for some of the recent building expansion, but Stonebreaker said, “Not as much, because they had a fairly substantial grant.”

The Ocean Park building is owned by the Timberland Regional Library system, which “does of good job of buying new books,” so Friends doesn’t pony up for that. But they do purchase books for that branch if they’re written by local authors.

The library building in Ilwaco is a Timberland branch, but isn’t owned by the system. It’s the property of the city. Friends help fund landscape maintenance there and donate for even more library needs.

Stonebreaker put it in a nutshell. “We make money on the book sales and buy what the libraries are asking for.”

From February on, board members work quite a bit to prepare for the Memorial Day book sale. Then, they can rest a while.

“We don’t meet every month,” Stonebreaker stated. “Like after the sales, we don’t usually meet that following month. Technically, we meet on the third Tuesdays, but we really don’t always do that.”

Non-board Friends of the Library members, according to Stonebreaker, total about 200. They’re the people who have paid $5 to join. If any of them want to become board members, they can express interest at either the Ocean Park or Ilwaco branches and can be put in touch with Stonebreaker.

Other community members are also encouraged to consider joining the board. And for all who are interested, they should not worry about having bulging muscles and a truck. A volunteer, Stonebreaker said, “could even do things like the newsletter or work on the membership list, if they can’t lift and move books.”

Books donated by community members fuel the whole process. They can be dropped off at either library branch. Stonebreaker and the others only ask that the books not be musty or smoke-infused. “Otherwise,” she said, “we have to pay to discard them.”

Last Friday, Stonebreaker drove up near the ramp of the main IHS building about 10:30 a.m., the back of her Venza loaded with boxes of donated books. Board member Marion Oman began moving boxes from the vehicle to a cart. Within minutes, IHS students Carson Moore and Christian Gottwald pitched in to help. Stonebreaker used to be on the school board and said she has mastered the art of recruiting such young assistants. Actually, she doesn’t have to actively recruit anymore. She said, “Now, when they see my car, they just come to help.”

Board Secretary Linda LeClaire was ready to help with sorting, in the long hallway off the atrium that the school allows the Friends to use. Both sides of the hall have tables. The walls have signs for sorting the many categories of books. It’s a slick process, because when time comes, the books are ready to be transported to the next room for the sale. Stonebreaker arranges to “hire groups,” such as the “track kids” to move all those boxes of books. The groups, not the individual students, are paid, but it’s still a win-win situation. It’s the efforts of many that supply the libraries with what they need.