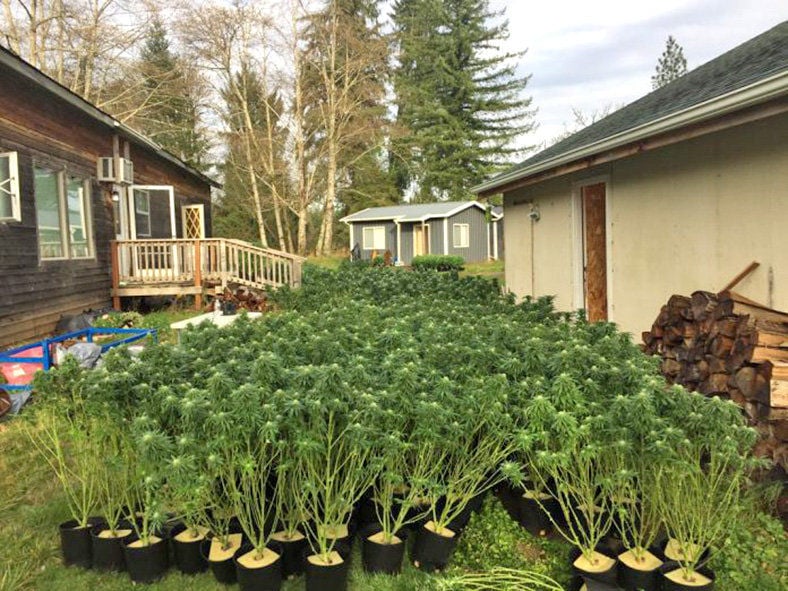 These marijuana plants were seized during raids last week in Pacific and Grays Harbor counties. 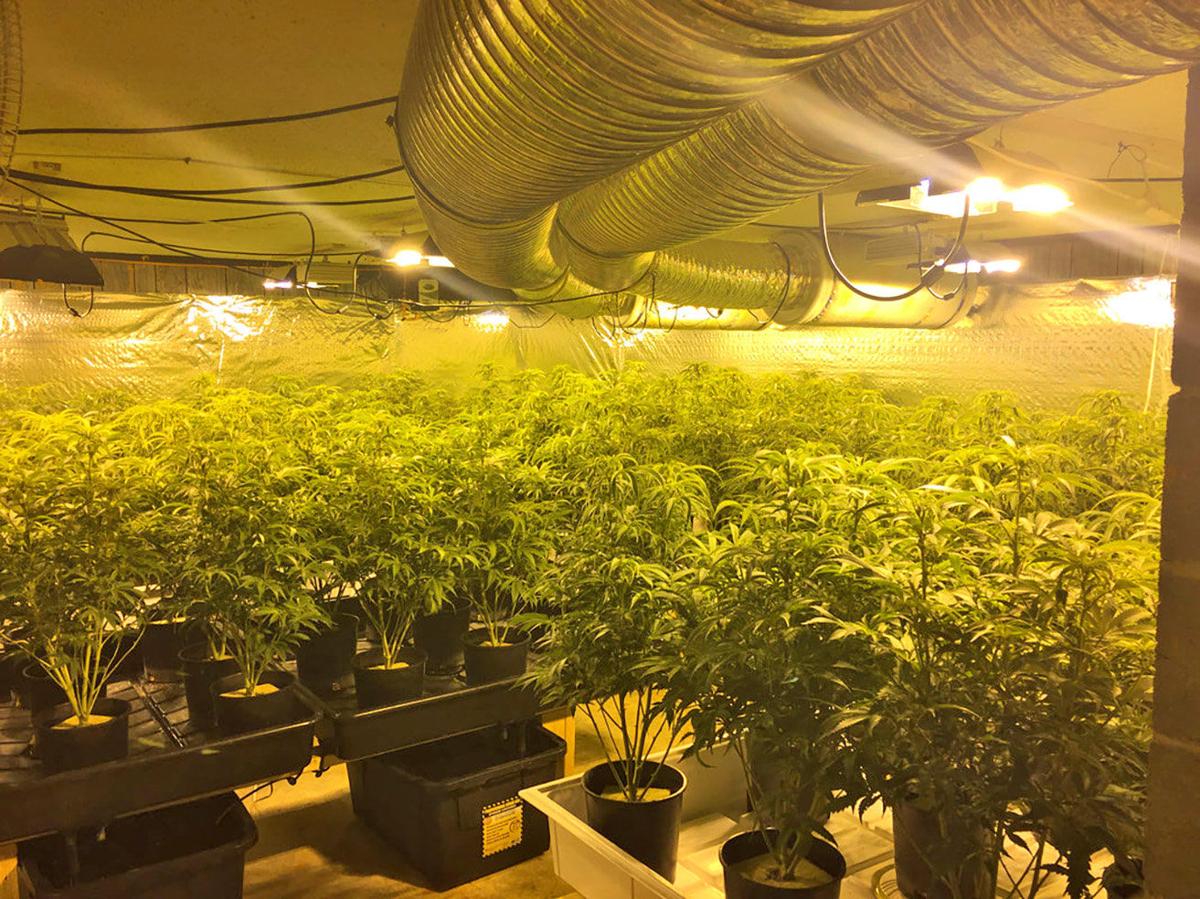 Marijuana was being grown on an industrial scale in facilities in Western Washington that law enforcement agencies allege are linked with Chinese organized crime.

These marijuana plants were seized during raids last week in Pacific and Grays Harbor counties.

Marijuana was being grown on an industrial scale in facilities in Western Washington that law enforcement agencies allege are linked with Chinese organized crime.

The “unprecedented” bust began on Nov. 28, when the Grays Harbor Drug Task Force served about 50 warrants in Grays Harbor, Thurston and King counties, according to Chief Criminal Deputy Steve Shumate of the Grays Harbor County Sheriff’s Office. More sites were searched later in the week.

By Monday, Dec. 4, the task force had served almost 60 warrants, arrested at least 50 people, seized about 35,000 plants and 50 pounds of processed pot and confiscated 26 vehicles. Police also found guns, more than $400,000 in cash and gold, other items of value and information about more possible grow-houses.

“The scale is nowhere near anything we’ve ever done before,” said Shumate, a sheriff’s office veteran of almost 29 years.

More than 40 of the warrants were served in Grays Harbor County communities, but the Chinese gang had also expanded south. On a tip from the task force, the Pacific County Sheriff’s Office on Nov. 29 searched houses in North Cove, Raymond and Menlo.

Deputies arrested two men, Linh D. Nguyen, 29, and Hoa D. Doan, 35, both of San Jose, California, in a home on the 1000 block of Pine Street in North Cove. County records show Thuy Thi Le, also of San Jose, purchased the property in August for about $45,000. Although the two arrestees and the owner have Vietnamese names, deputies believe the local grows are part of the Chinese criminal enterprise.

Most of those who were tending the plants didn’t speak English, Shumate said. They kept to themselves in houses that were mainly in sparsely populated areas, he said.

Around January, deputies patrolling near Elma started to suspect a house was being used to grow pot, Shumate said. By late summer, law enforcement officers in McCleary, Hoquiam and Aberdeen had also identified possible grows.

“When we started to realize that there were some commonalities with these locations, the task force got involved,” Shumate explained.

The Grays Harbor Drug Task Force is led by the sheriff’s office. It includes representatives from all of the county’s law enforcement agencies. Pacific County used to have its own drug task force, but it was dissolved due to budget shortages a few years ago.

The investigators studied property records for the suspected grow-houses and called previous owners. They learned the new owners often paid cash for the houses, buying some without looking at them first.

The sellers didn’t know their homes would be used for illegal activities, Shumate said. But some acknowledged that they “thought it was a little too good to be true” when the buyers asked to buy their houses outright.

Large-scale grows often consume enormous amounts of power and water. Growers often meet the demand for power by diverting electricity from other sources. But the Chinese nationals appear to have modified the houses’ electrical systems to meet their needs.

“They hired electricians, called in the PUD,” Shumate said. That proved useful for the investigators, who got warrants to view the utility bills of suspected grows.

“You see a house that was sold and all of a sudden, the electric bill goes through the roof. That obviously may be a clue,” Shumate said.

As the investigation progressed, the list of suspected growing operations expanded to include additional locations in Ocean Shores, Cosmopolis, Montesano, Olympia, Lacey, Medina, Bellevue and Kent.

“They were purchasing homes at such a rate that we actually had to cut off the number of places we were looking into because it was exceeding the capacity of the task force,” Shumate said.

By the time the coordinated raids finally took place on Nov. 28, the operation involved over 300 people, including officers from other police agencies, translators and drivers. Personnel from the Aberdeen Fire Department and Grays Harbor County Fire District No. 2 helped with organizational aspects of the raids, Shumate said. Officers from South Bend and Raymond were among those who helped out.

“It was an enormous operation,” Shumate said.

The 2012 passage of Initiative 502 set up a state system for the sale, production and use of recreational marijuana in Washington. Under state law, only licensed, heavily-regulated producers may grow marijuana for sale. However, there is growing evidence that illegal grows are proliferating in states where pot is legal, Shumate said. In the last couple of years, police in Colorado and California — both states that have decriminalized weed — have busted major growing operations run by Chinese nationals.

States that legalize pot tend to shift money away from surveillance and eradication efforts. That makes it less likely that illegal producers will get caught.

“[The growers] are not going to set up in a state where it’s illegal, because they are going to come under the radar,” Shumate said.

However, he said, the pot from these grows is most likely not being funneled into the states’ legal pot markets. Instead, the Chinese investors and operatives are probably shipping their product to the East Coast, where recreational pot is still generally illegal, and sells for a premium.

“The market in New York is very lucrative,” Shumate said.

The busts might be over, but the work is just beginning. There may be more grow-houses in the region and investigators have dozens of unanswered questions about how tiny Southwest Washington communities like Menlo and Elma became outposts of a Chinese criminal enterprise.

“This is still an ongoing investigation,” Shumate said. “We are going to try to determine how these individuals came into our country, how this product got out of our county. That’s gonna be a long process.”

Investigators on the task force think the lucrative pot grows could be funding other, even more nefarious criminal activities, including human trafficking. The growers “definitely were not working under the best circumstances,” and may not have been there voluntarily, Shumate said. Additionally, he said, “It’s possible that it’s more than just marijuana. There may be other drugs associated with this.”