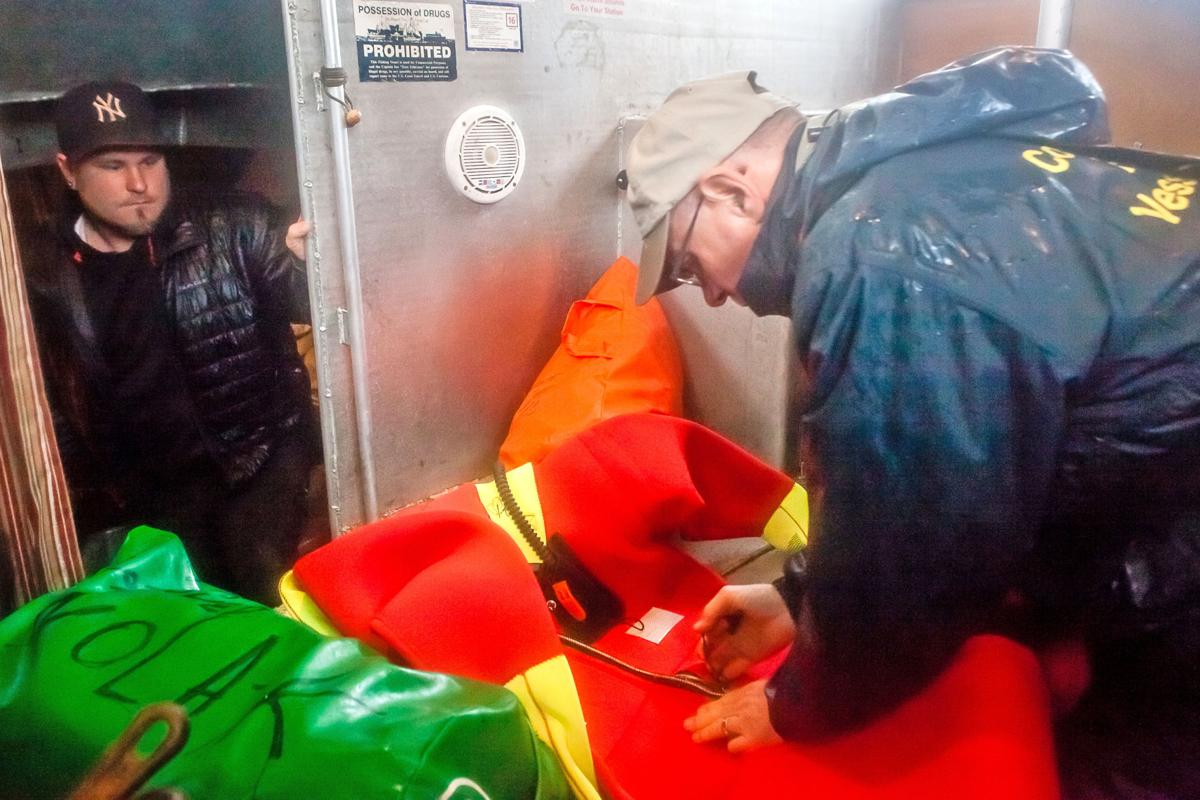 A crewmember looked on as volunteer safety inspector Ron Hilburger, of Portland, examined immersion suits and other survival gear aboard the Nola K on Jan. 11. The U.S. Coast Guard and members of its auxiliary have been partnering with the commercial crab fleet in recent years in an effort to stem losses in one of the nation's most hazardous fisheries. 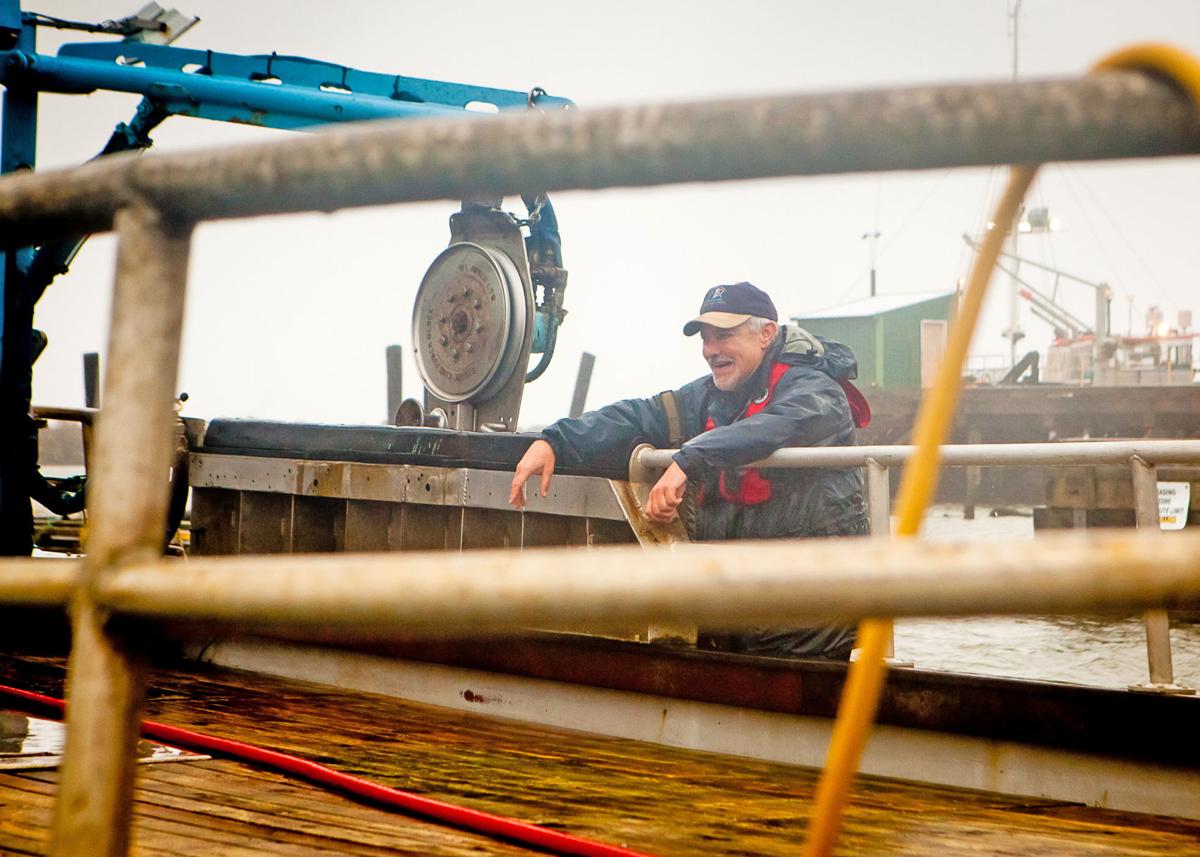 U.S. Coast Guard Auxiliary member Dan Cary, of Cathlamet, chatted with the crew of a boat while conducting safety inspections in Chinook on Jan. 11

A crewmember looked on as volunteer safety inspector Ron Hilburger, of Portland, examined immersion suits and other survival gear aboard the Nola K on Jan. 11. The U.S. Coast Guard and members of its auxiliary have been partnering with the commercial crab fleet in recent years in an effort to stem losses in one of the nation's most hazardous fisheries.

U.S. Coast Guard Auxiliary member Dan Cary, of Cathlamet, chatted with the crew of a boat while conducting safety inspections in Chinook on Jan. 11

Frustrations grew Tuesday as crabbers and processors continued drawn-out negotiations over 2018’s opening price for Dungeness crab. All was silent in the Ilwaco channel and Port of Chinook in recent days when boats ordinarily would have been noisily traveling back and forth to crabbing grounds. No lights bobbed on the ocean off the Long Beach Peninsula.

Commercial crab harvesting was set to open Monday south of the Klipsan Beach line, but price negotiations and ocean conditions are keeping boats in port. The season delay is certain to be the longest in history, after being repeatedly pushed back from its traditional Dec. 1 start. As a result, crabbers missed selling during the lucrative Christmas/New Year season and are fast approaching the increasingly profitable Chinese New Year celebrations that culminate Feb. 16.

A 30-foot west swell with 7-foot wind waves is forecast for the prime crabbing grounds just off the Long Beach Peninsula this Thursday. Swell and wind waves are expected to gradually diminish, but as a practical matter some crabbers don’t expect to start soaking pots before next week. The high seas worsen danger for boat crews working in a fishery that is highly prone to deaths and injuries, and also increase the odds of losing expensive crab pots.

A delay into next week has the potential of meshing with the planned opening of crabbing from Klipsan to the U.S.-Canada border, which begins with a 73-hour soak period starting 8 a.m. Jan. 25 and coast-wide harvest starting 9 a.m. Jan. 28, assuming a price agreement has been reached.

At one point major processors offered crabbers $2.30 a pound — not nearly enough to convince them to go out, local crabbers said. The price inched up during the state-sponsored negotiation period in Oregon, but by the time those negotiations ended the processors’ price still remained under last season’s average starting price of $2.89 per pound. Pacific Seafood based in Clackamas, Oregon dominates the processing side of the industry. Talks were expected to continue this Wednesday.

With the North Pacific still rebounding from a period of relatively un-nutritious warm water, crab have been slow to put on meat this season. The most recent tests found crab off the Long Beach Peninsula with average meat recovery of 24.4 percent on Jan. 4 — well above the 23 percent required under the Tri-State Agreement for crab management. But on Jan. 2, Clatsop County crab still were still a little under weight, at 22.8 percent.

The late start has been a blow to the local economy. Crews who spent months preparing pots and loading boats have yet to be paid and restaurants hoping to offer locally-caught crab are still waiting. Fish processors are on standby.

Pacific Northwest and Northern California boat owners and crews traditionally rely on big paychecks in December to pay for holiday shopping and catch up with bills. Typically about three-quarters of the entire year’s harvest occurs in roughly the first six weeks of the season, after which many switch to harvesting halibut or cod along the West Coast up to Alaska. They are looking at a smaller and smaller window of opportunity to make some money crabbing.

In Pacific County, fuel sales during the commercial crab season and the Buoy 10 summer sport fishing season make up the bulk of the tiny Port of Chinook’s revenue.

“Even if it starts late, crabbing never really goes past March or April,” said John Demase, marina manager. “So that’s a month and a half of fuel sales lost that we will not recover.”

In Washington state, ex-vessel Dungeness value averages about $19.9 million. Landings fluctuate but average at about 9.5 million pounds each season. In Oregon, the fishery averages 16 million pounds per season and an average ex-vessel value of $32.5 million, according to the Oregon Department of Fish and Wildlife.

Comments on social media reflect increasing tensions about the situation, with one of the more philosophical crabbers choosing to quote Otis Redding, “Sitting on the dock of the bay watching the tide roll away. Wasting time.”

A crabber in Tillamook said Sunday, “We are moving gear back off the dock. It’s a couple weeks till we can fish and a storm is brewing up to 27 foot and the gear is all in the path of over-topping waves.”

A La Push fisherman wasn’t sympathetic: “Give up and cry then. If you don’t like it go back to farming or logging. The crab are not going anywhere,” to which a Newport crabber responded, “But they do like to mate, dumbass — once they start clutching the catch rate goes down — and in return we get shorted.”

A Columbia River crabber observed Tuesday morning, “Late start this morning but I have had enough coffee to bang away in the engine room for the next couple hours. The fleet is ready to go. It’s not too often we see everyone tied up this time of year.” Someone down the coast responded, “It’s so frustrating. I’m hoping they’re able to go soon! The bills keep coming…”

— With additional reporting by the Chinook Observer