David Cross, as Robert Michael Pyle, in one of the last scenes of ‘The Dark Divide.’ 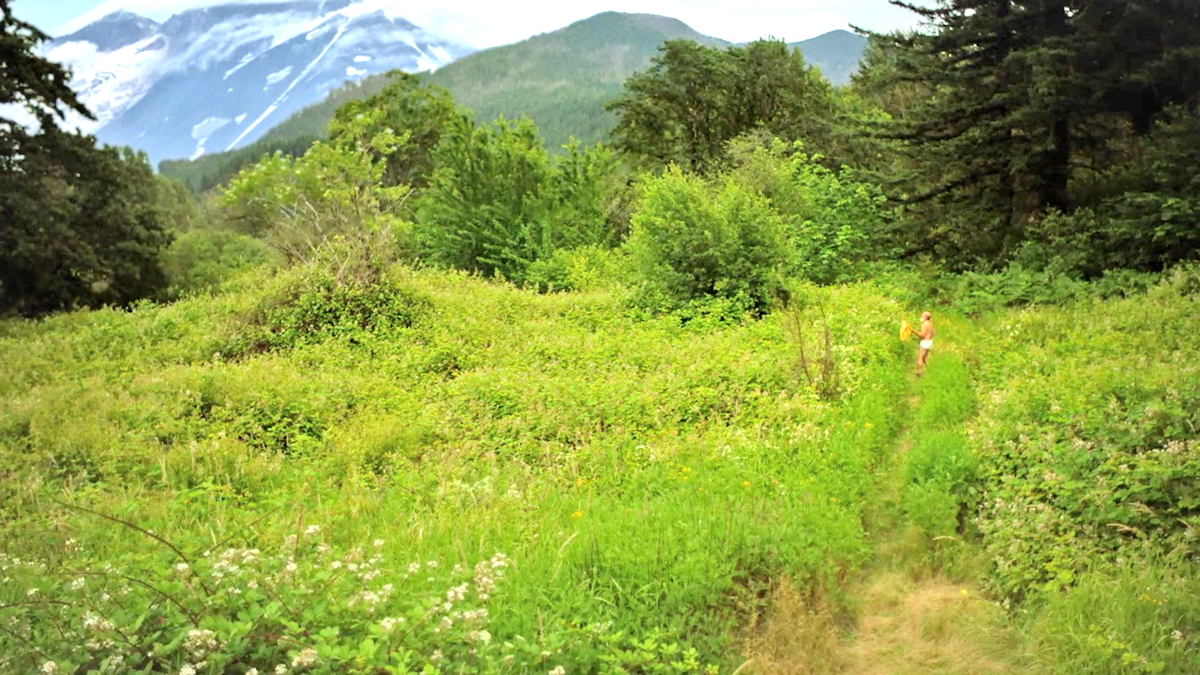 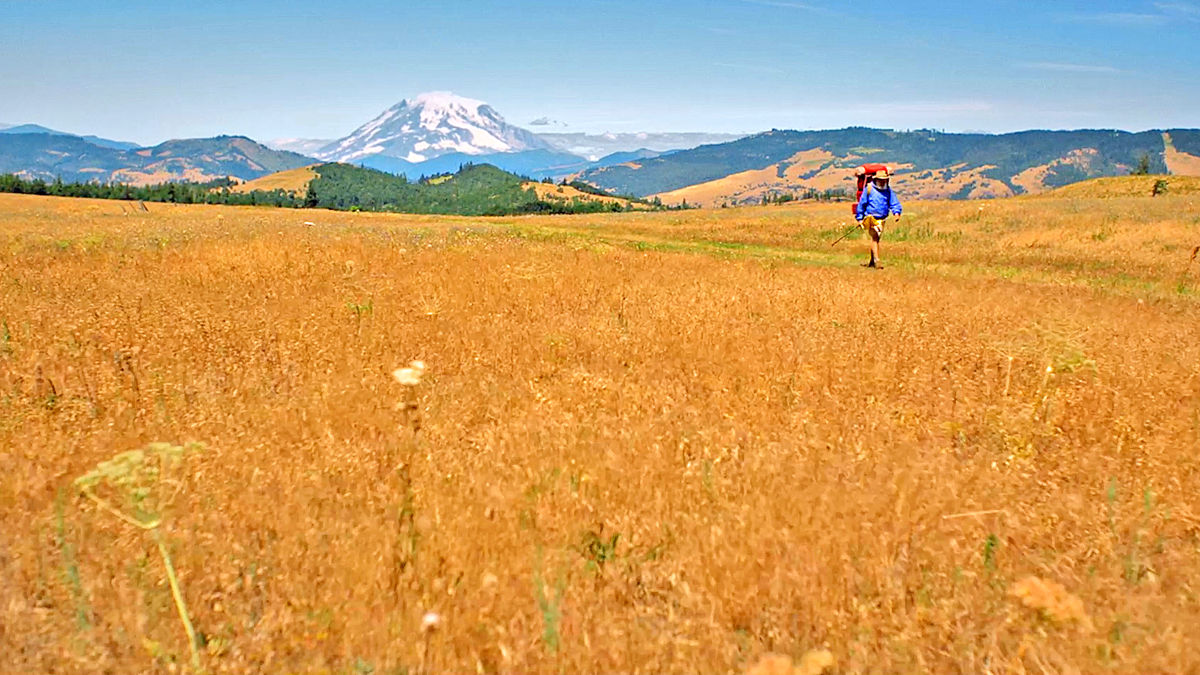 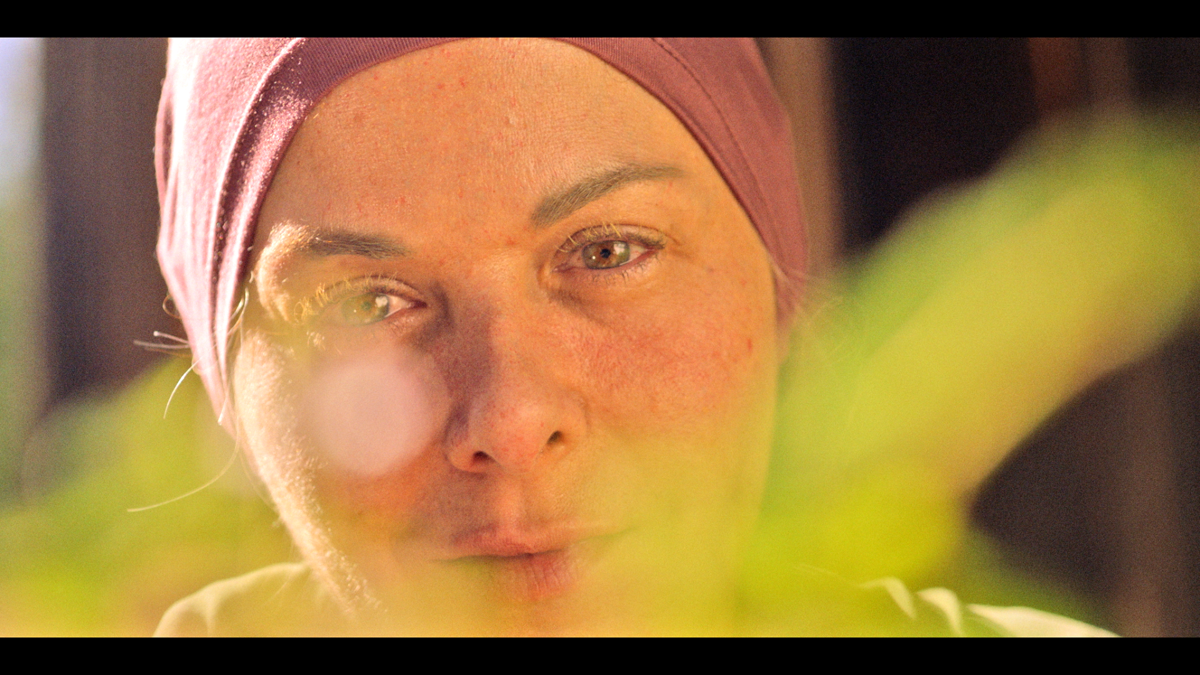 Debra Messing, as Thea Linnaea Pyle, in ‘The Dark Divide.’ 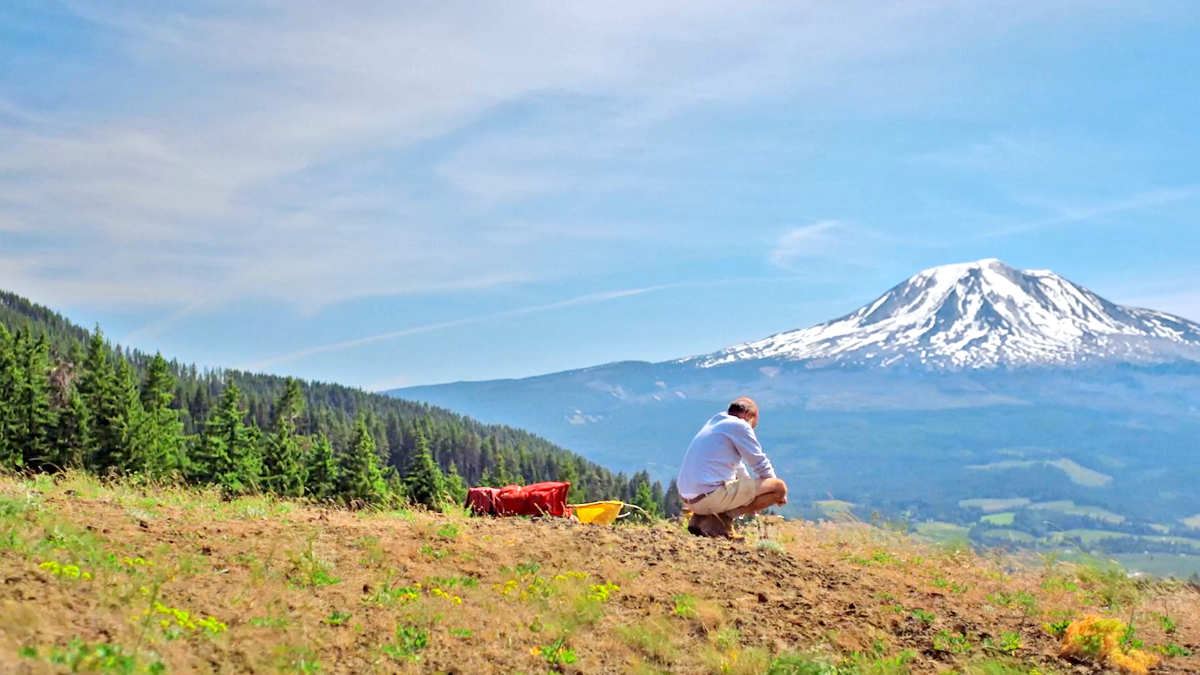 David Cross looks toward Mt. Adams in ‘The Dark Divide.’ 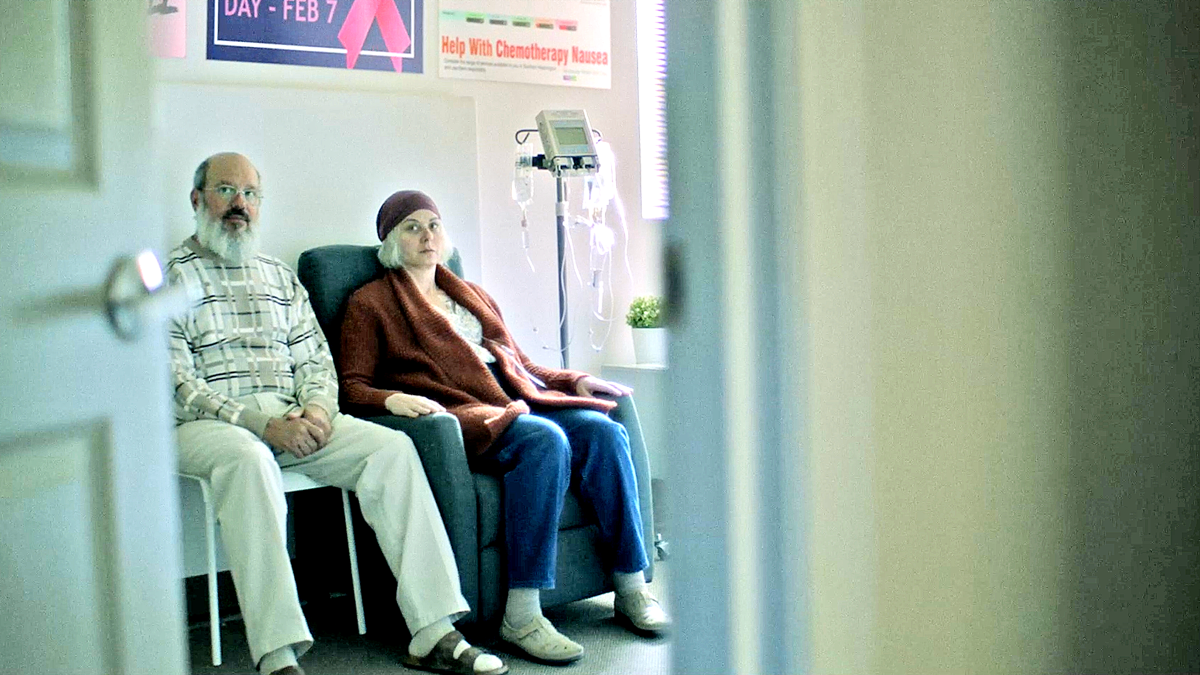 Debra Messing and David Cross during ‘The Dark Divide.’ 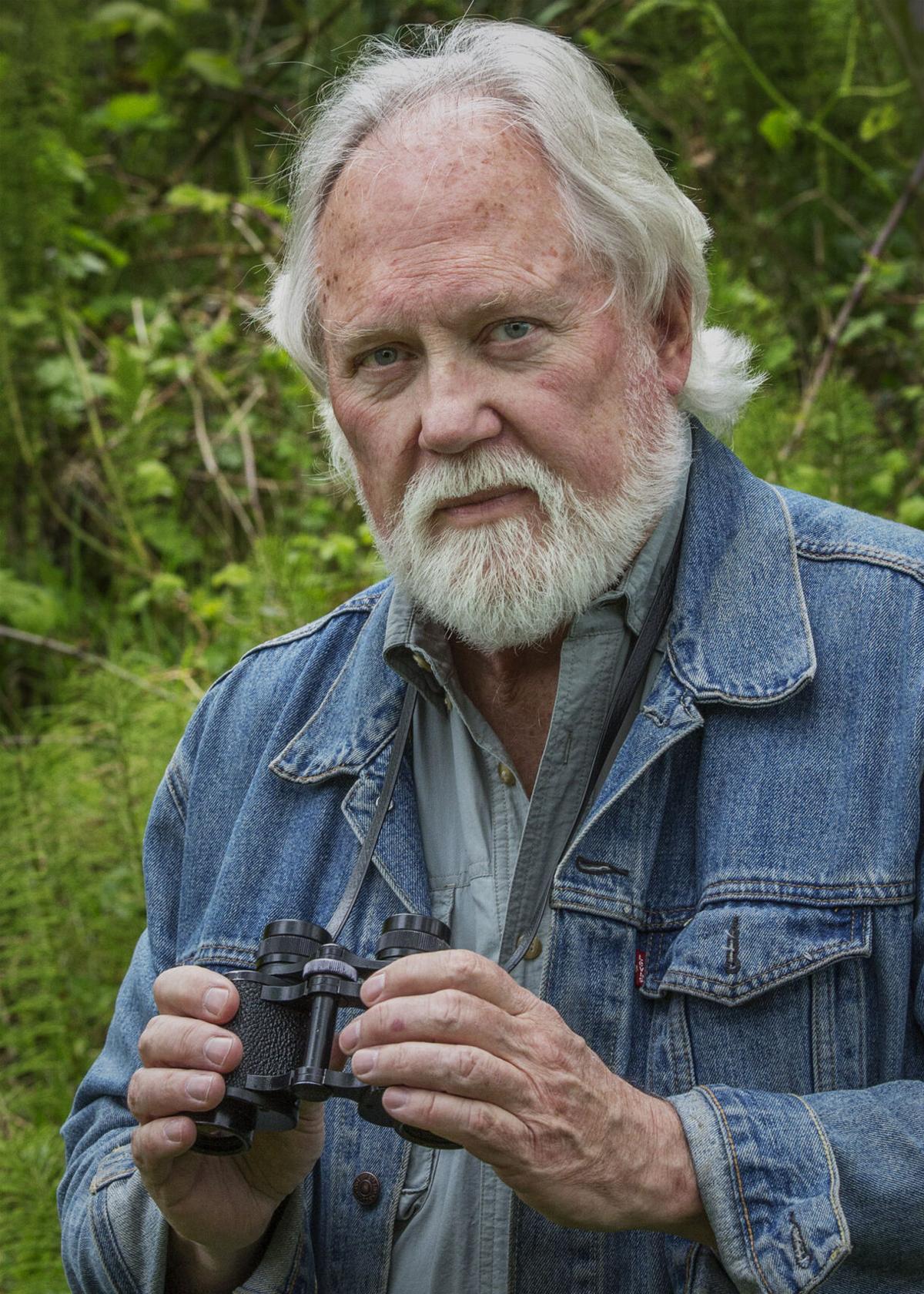 David Cross, as Robert Michael Pyle, in one of the last scenes of ‘The Dark Divide.’

GRAYS RIVER — In 1995, with a pack full of clothes, food and supplies to last 30 days, Robert Michael Pyle stepped into the unknown.

Over the next six weeks, he journeyed through Gifford Pinchot National Forest, one of the country’s largest undeveloped wildlands. Pyle set off with a goal to learn more about the creatures that live there.

Little did he know he’d return with stories to tell not only of the people and creatures of the forest but also countless life-changing experiences.

“The Dark Divide,” a soon-to-be-released movie, is based on Pyle’s 1995 adventure and subsequent book, “Where Bigfoot Walks: Crossing the Dark Divide.”

The movie will be shown at 7 p.m. Friday through Sunday at the Columbian Theater in Astoria. Pyle, who lives in Grays River in Western Wahkiakum County, will attend the Friday showing to discuss the movie with the audience.

The movie stars David Cross as Pyle and Debra Messing as Pyle’s wife. Cross is best known for his long-running role in “Arrested Development” and for voicing many cartoon characters, including Crane in the Kung Fu Panda movies. Messing is famous as co-lead in “Will & Grace.”

Pyle’s aim for his book was to create a conversation about the area.

“The main reason I wrote the book — I want to be, and I very much hope the film will be, a useful tool or force for the conservation of ‘The Dark Divide.’ This wonderful area where this story takes place is the largest unprotected wilderness in Washington,” he said. “It very much so needs more protection than it has.”

'If we manage to save a good amount of Bigfoot habitat, whether or not Bigfoot walks, we’ll have managed to save one of the greenest wild places in the country.'

Pyle hopes people who watch the movie and read the book will join the effort to conserve the forest.

“My remaining greatest ambition as a conservationist is to see a ‘Dark Divide’ conservation area established while I’m still kicking,” he said. “If we manage to save a good amount of Bigfoot habitat, whether or not Bigfoot walks, we’ll have managed to save one of the greenest wild places in the country.”

While the movie is mainly focused on Pyle’s solo trek through the forest, many scenes focus on his relationship with his late wife, Thea, who died in 2013 after a 10-year fight with ovarian cancer.

“I hope that this will be a wonderful remembrance of Thea for people,” Pyle said. “I was worried about how the portrayal of her would be … I think it’s utterly stunning how Debra evoked her. She was a force and she will continue being one, thanks to Debra’s portrayal in the movie.”

There are also scenes depicting tough moments, sometimes between Pyle and his wife as she goes through chemotherapy.

Years in the making

Director Tom Putnam grew up in rural Oregon, often hiking trails and fishing in the creeks and lakes of Gifford Pinchot National Forest. After reading Pyle’s book, he knew he wanted to make a film.

“When I first read Dr. Pyle’s book, my memory was flooded with the images, sounds and smells of my childhood,” Putnam said in a statement. “Dark forests lit with pinpoints of sunlight through the old growth canopy high above. Gurgling creeks and glassy lakes with trout jumping at dusk. The smell of rotting leaves and wood turning to mulch.”

The film took about a decade to create.

“When [Putnam] first let me know he’d read the book and was moved by the book, he told me way back then he wanted to make a movie. He was known primarily as a documentarian and still is,” Pyle said. “I had had some film experience with the book but no one had tried to adapt it to a film.”

The movie was first expected to be a documentary, Pyle said. As the project evolved, the movie became a narrative film instead.

“[Putnam] had an extremely challenging task to make some parts of the film work,” Pyle said. “Some parts of the movie are fictionalized but [Putnam] wanted to keep the movie as true to the book as possible. We’ve been to ‘The Dark Divide’ together and I trusted him to make it work.”

Almost every scene in the movie is based on a chapter in the book. Putnam also used short stories, poems and other books by Pyle as inspiration for the film.

“I could see all along he was hewing to the truth, that the nature of the movie would be true to the book,” Pyle said. “Of course, in some cases, he had to extrapolate a little bit to enhance the drama.”

Putnam checked in with Pyle regularly throughout the script-writing process.

“He listened to me if I thought something could be done in slightly different ways or if it wasn’t done as it happened,” Pyle said.

During filming, which lasted 22 days, Pyle visited the set. While there, he taught Cross how to catch butterflies, signed books for the crew and shared family photographs with Messing.

“You can imagine how I feel having my work translated by such an extraordinary cast and crew,” Pyle said. “I’m an extremely lucky person to have had this experience.”