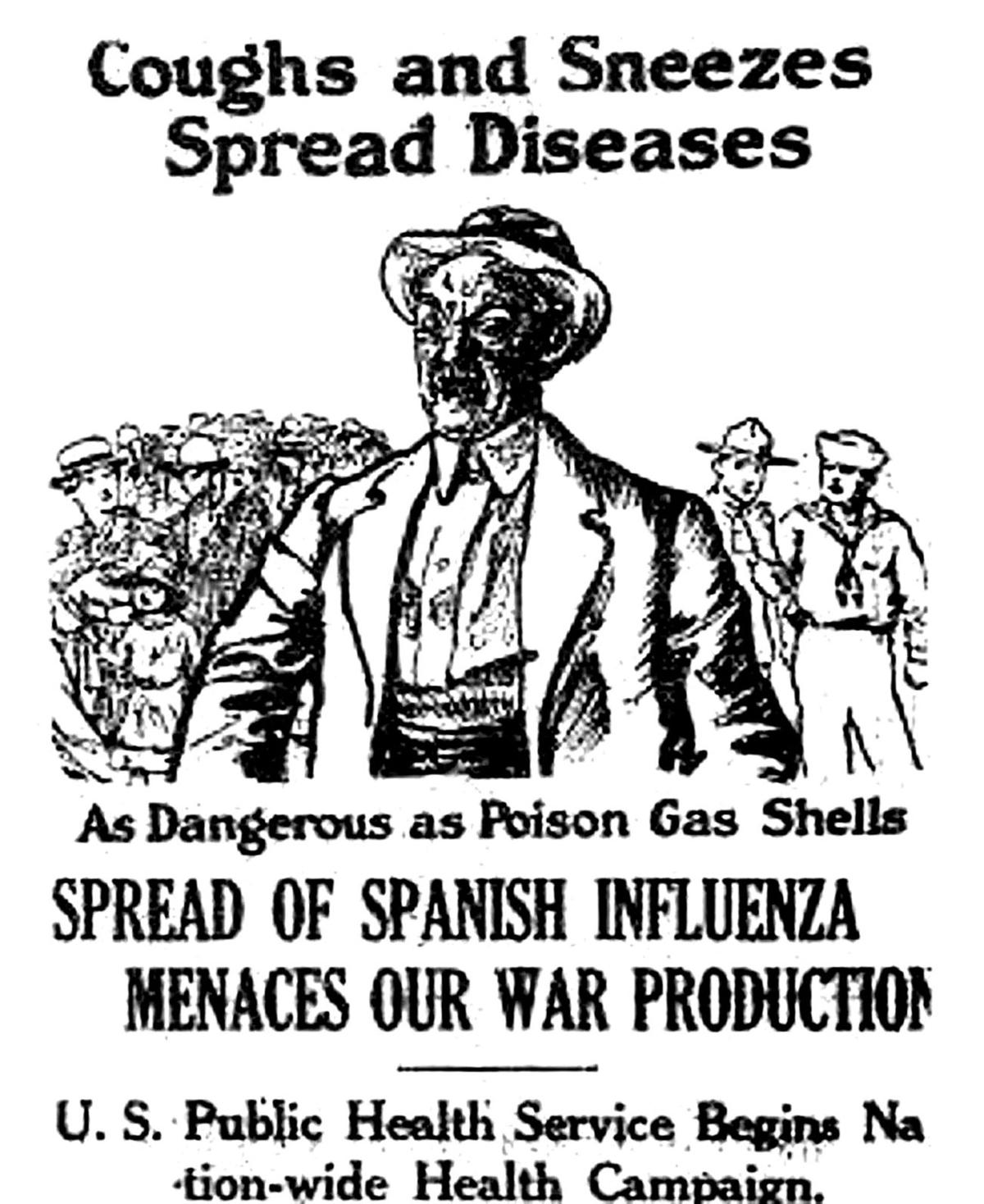 In less than a year, the 1918 flu pandemic killed more people than World War I, including many residents around the Columbia River estuary. 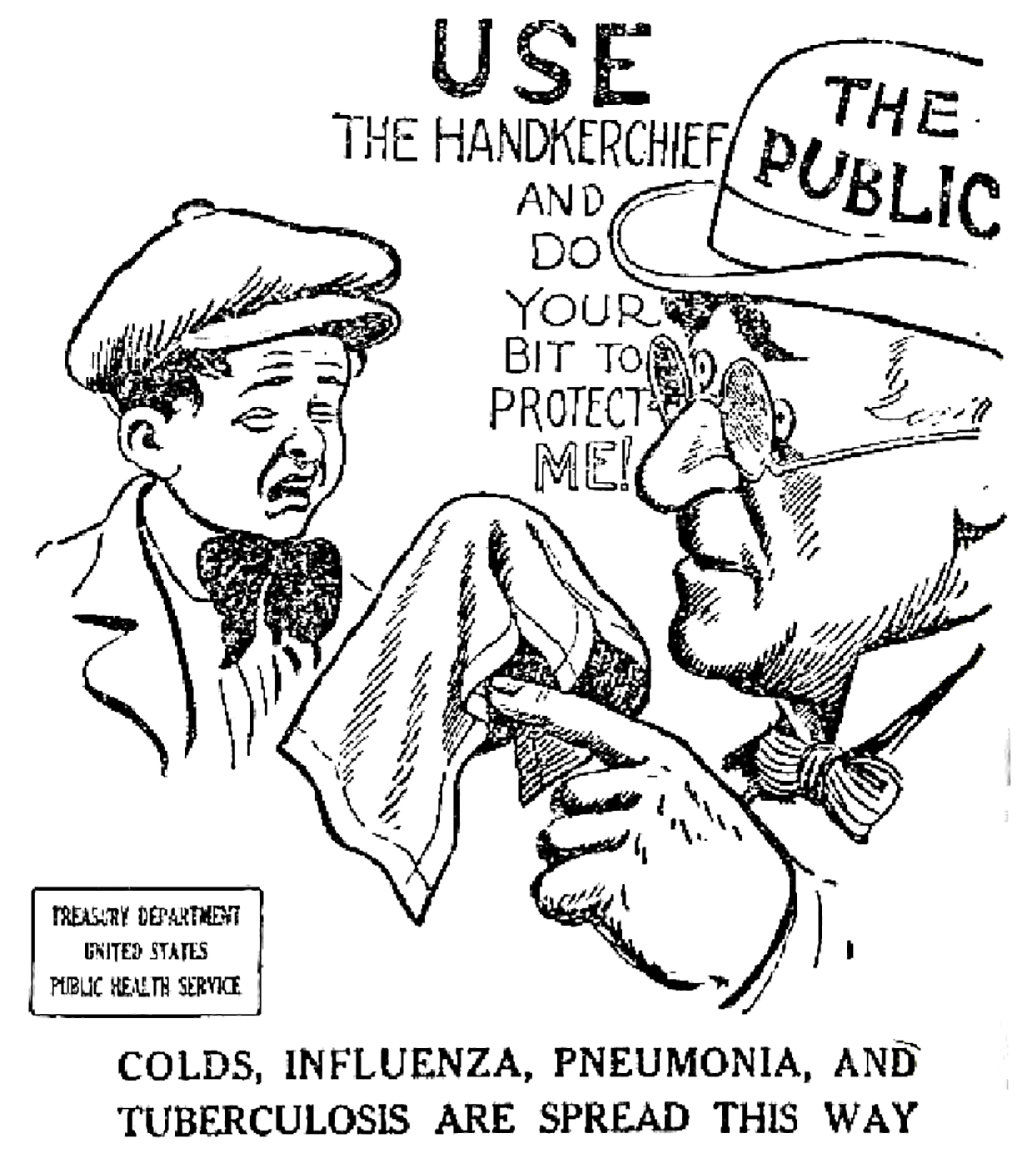 A U.S. government public service cartoon aimed to help Americans protect themselves against the deadly 1918 flu.

In less than a year, the 1918 flu pandemic killed more people than World War I, including many residents around the Columbia River estuary.

A U.S. government public service cartoon aimed to help Americans protect themselves against the deadly 1918 flu.

EDITOR’S NOTE: This story, which drew from hundreds of local news items and other sources, is the first of a two-part series on the 100th anniversary of the 1918-19 flu pandemic and its local impacts. This subject is particularly relevant this winter as the nation again struggles with a dangerous strain of the virus.

WASHINGTON — When 21-year-old soldier Carl Hall boarded the S.S. President Grant in Hoboken, New Jersey in September 1918, he was part of a 12-ship convoy bound for the war front in France. The South Bend native knew he was headed for danger, but he had no idea how quickly he’d find it.

Just a few days out of port, a deadly epidemic of Spanish Influenza broke out on the ships. Soon, the 50-bed hospital on the Grant had 700 patients. Surviving soldiers were working their fingers raw sewing the dead into their canvas shrouds. Hall later told the South Bend Journal the first few victims were given full military honors before their burials at sea, but soon, there were so many bodies that formal ceremonies became impractical.

Hall survived both the first lethal wave of the worldwide Spanish Influenza pandemic and the bloody battlefields in Europe. He came home to South Bend in February 1919, just in time to discover that the people of Pacific County were still under siege from flu.

The Spanish flu wasn’t Spanish. Historians now believe it probably originated near Fort Riley, Kansas, in March 1918, but it didn’t stay there. The entire country was focused on winning the Great War and thousands of patriotic young men and women were daily moving around the state, across the country, and onto ships bound for France. In doing so, they unwittingly helped create a global pandemic that would kill tens of millions of people in the space of about a year.

Pacific County residents read about the pestilence sweeping through the big cities in the Midwest and East, and doubted that such a thing could happen in the isolated towns and deep green forests of western Washington. The editor of the Chinook Observer predicted the “sweet and wholesome” coastal air would keep it from gaining a foothold in Pacific County.

“Everybody comes to Chinook when the outside world is burdened with dangerous contagions,” he wrote on Oct. 25.

In mid-September 1918, a trainload of sick soldiers from Philadelphia arrived at a naval yard on Puget Sound. Many of them continued on to Camp Lewis (now Joint Base Lewis-McChord), the Army’s regional hub for training and operations. In wartime, thousands of soldiers passed through the Tacoma base on their way to other places, including the military installments in Pacific and Clatsop counties. In late September, Camp Lewis sent three trainloads of soldiers, some of whom were sick, to Fort Stevens, near Warrenton.

By Oct. 2, there were about 120 sick soldiers in the hospital at Fort Stevens, with new cases emerging every day.

“At last Oregon has been infected with the plague,” a Morning Astorian reporter wrote.

Fort Stevens was placed under a strict quarantine. Over the next two weeks, acting Astoria Mayor Charles Johnson took increasingly extreme measures to prevent the spread of flu. By mid-October, he had banned public gatherings of any kind. Ilwaco leaders responded quickly too, shutting down the schools to prevent flu from spreading among children.

Among the first to die were Capt. Harold M. Craig, 40, William Grothaus, 20, and Hjalmar Johnson, 24, at Fort Stevens on Oct. 10. On the Washington side, Fort Canby was quarantined “with ironbound edicts” on the same day, according to the Observer.

Meanwhile, the shipyard and timber camps near Raymond and South Bend were running at full-tilt to support the war effort. With hundreds of men living and working in close conditions, an outbreak was almost inevitable.

Raymond Mayor E.C. Lawler imposed the county’s first full quarantine on Oct. 8 as a preventive measure. It was too late. Grocer Ernest Johnson, his wife Juanna and their five-year-old daughter and 20-month-old son all fell ill at the same time. Reports of illness among the men of the Spruce Division — an army unit dedicated to harvesting timber — began to filter in from the woods.

A virus is a minuscule piece of DNA, encapsulated in a protein shell. In isolation, it’s inert; not really even a living thing. Once it finds a host cell, however, it inserts its genetic material and takes over. The cell becomes a tiny factory, programmed to produce as many new viruses as possible.

The human body develops defenses against familiar viruses, and fights off most within a few days. But every so often, the flu virus mutates, and a novel strain is born. Humans have no immunity to novel strains, and vaccines can’t protect against them. As the citizens of Pacific County would find out over the six months between October 1918 and March 1919, an aggressive new flu strain can cause absolute devastation.

While most people who die of flu are very young, very old, or already very sick when they become infected, the Spanish flu proved lethal to healthy young adults. It wasted no time in killing them, either. Across the country, newspapers gave stunned accounts of young flu patients who progressed to pneumonia in a matter of hours, turned blue from lack of oxygen, and suffocated as their lungs filled with fluid. Often, by the time a family learned that a loved one was sick, the victim was already dead.

Josephine and Fred Gass had high hopes when they set out from Ord, Nebraska in the second week of October. The military needed hundreds of new ships to get men and cargo to and from the warfront, so New York-based shipbuilding firm Sanderson & Porter was contracted to set up a new shipyard. With its proximity to the Willapa River and thousands of acres of prime timberland, Raymond was an ideal location for building wooden ships, but there weren’t enough men in the area to fill the estimated 1,000 new jobs. That created new opportunity for men like 32-year-old Fred, who worked as a steamfitter and plumber, according to census records.

Josephine’s brother, Joe Drozda, was already living in Raymond, and had offered them a place to stay, so they decided to move west. But a stuffy, crowded train compartment was the perfect place for the deadly virus to find new hosts. Both caught flu on the trip to Washington. By the time they reached Raymond, Josephine, 29, was gravely ill. They stayed with her brother for two days, but it quickly became clear that the couple needed more care than he could provide. Both were admitted to Riverview Hospital. Josephine died on Oct. 13.

“Pneumonia set in with Mrs. Gass and her case was hopeless from the beginning,” the Raymond Herald reported. Although “doctors made a hard fight to pull him through it,” Fred Gass died on Oct. 17.

Days after they arrived, their bodies were shipped backed to Nebraska. The Oct. 24 edition of the Ord Quiz announced their demise with the headline, “Husband and wife buried in one large grave.”

By mid-October, cases had arisen in Chinook, Naselle, South Bend and Raymond. Community leaders were scrambling to check the spread of the disease by closing schools, churches, theaters and dance halls. State Health Officer T.D. Tuttle wrote a letter urging local leaders to do everything in their power to stop people from congregating.

However, the arrival of the flu prompted even more travel around the region. Teachers went home to spend their “enforced vacations” with family, and some Peninsula residents tried to hide from the epidemic in more far-flung places like Lebam and Naselle. Wealthy Portland families came to their Peninsula vacation cottages to dodge the growing contagion at home — or to recuperate. Others left home to nurse afflicted family members.

In many cases, they took the illness with them. Harold Stanley Bell, 28, came home from Portland with the flu on Oct. 13, and died in South Bend five days later.

Juanna Johnson’s parents hurried up from Yolo County, California to care for her and her ailing family. However, they too fell sick and had to send for a granddaughter who lived in Olympia.

Her husband, Ernest and their two children recovered, but Juanna only grew weaker. She died on Oct. 20. Two other Raymond residents died the same day: baby Helen Zemny, and “prominent citizen” William Lovell, a meat-cutter, painter, and father of four.

Due to the ban on public gatherings, Juanna Johnson had only a brief graveside service. Her family fell apart after her death. By 1920, her husband had sent their little daughter Lois to live with her aunt and uncle in California.

As the number of cases grew in mid-October, a group of “Minute Women” met with Dr. George A. Tripp at his South Bend office to make plans for a temporary flu hospital.

With many qualified medical people away at the war, nurses were in short supply, so the Red Cross and the Minute Women recruited stand-ins from their communities. These women likely didn’t consider their actions courageous or heroic, but just like their counterparts on the battlefields of Europe, they took immense risks in service to their fellow Americans.

Among these was Ocean Park resident Dorothy Catherine Olney. The daughter of a Scottish mother and Canadian father, Olney and her sister and three brothers grew up in Ocean Park. She married San Francisco native Lloyd Olney in late 1914, and the couple moved to California. However, when Olney enlisted and was sent to France, she came back to live with her mother, Anna Hood.

In late October, her brother and sister-in-law, Ernest and Sophie Hood and their three children fell ill in Megler, and had to take time off from their jobs at Megler Station, a train depot and ferry terminal. As a young woman, Olney had trained to be a nurse at South Bend General Hospital, so she was the obvious choice for nurse. She went to stay with them in Megler.

Within a week, the Hoods were back at the station, looking decidedly worse for wear.

“Ernie looked like a defeated prize fighter after receiving the count and his wife didn’t look much better,” the Observer said on Nov. 8. “They want no more to do with ‘The Flu.’”

They didn’t get their wish. Olney quickly became so ill that she had to return to her parents’ home. The same day the Observer announced the Hoods’ recovery, the Pacific Tribune said Olney had suffered a relapse and was “seriously ill with pneumonia.”

She died on Nov. 9, just four days short of her 24th birthday. Nearly every paper in the county noted her heroism.

According to the Tribune, Olney’s live was “sacrificed that five other influenza victims might live.”

EDITOR’S NOTE: This story, which drew from hundreds of local news items and other sources, is the second of a two-part series on the 100th ann…