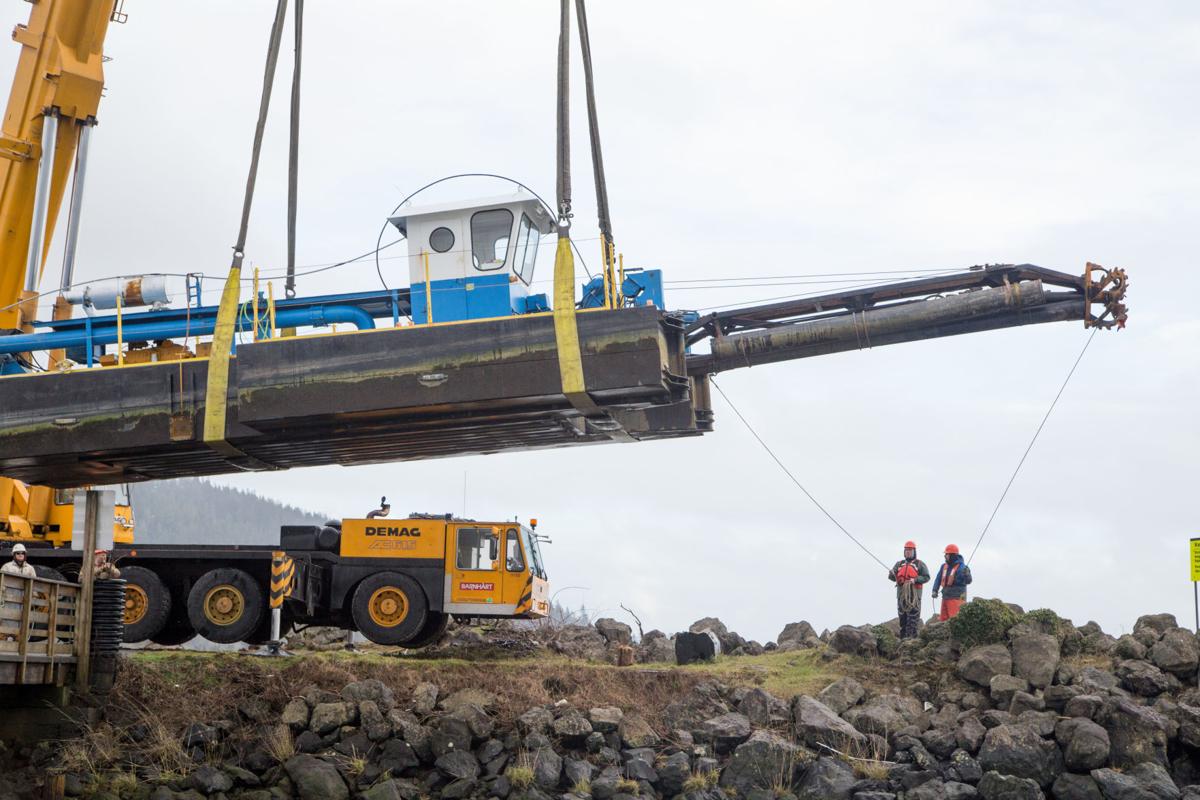 Ilwaco's dredge was moved by highway to the Port of Chinook in late January, allowing much-needed maintenance work to commence in Chinook, which has seriously silted up. Windy conditions on moving day made the job more difficult than it otherwise would have been. 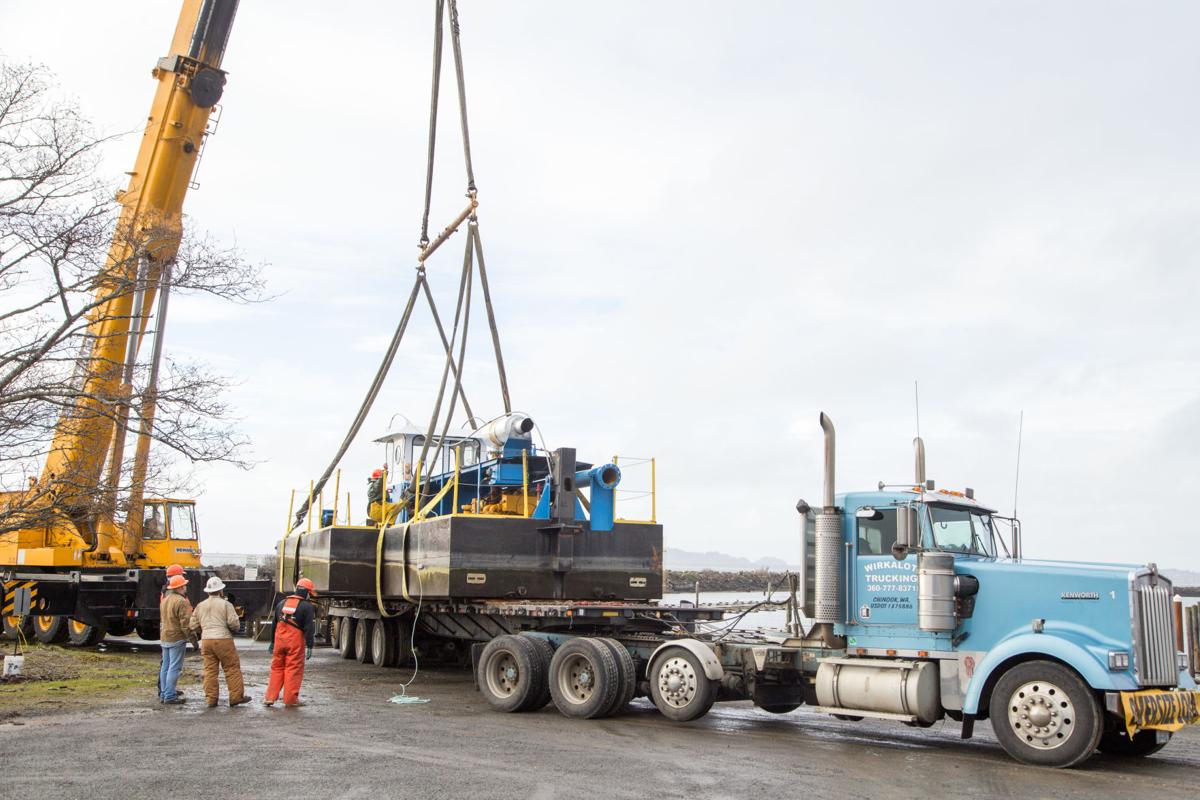 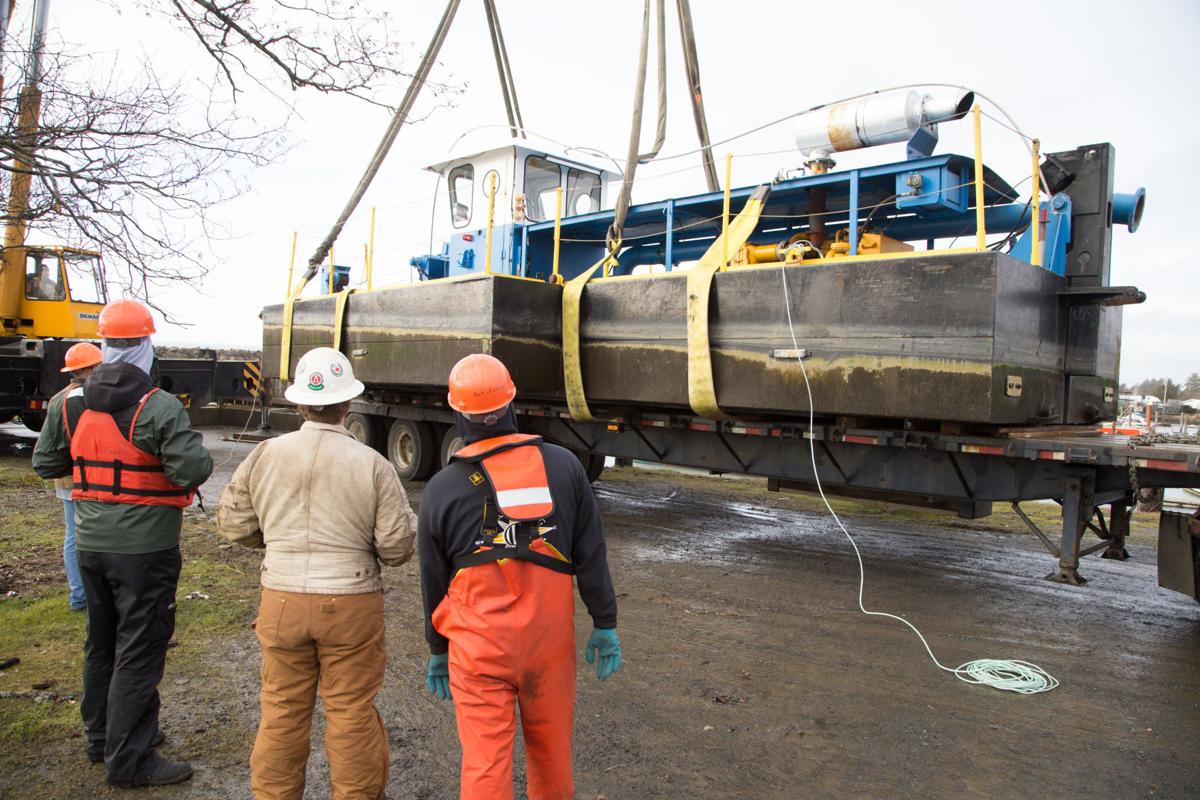 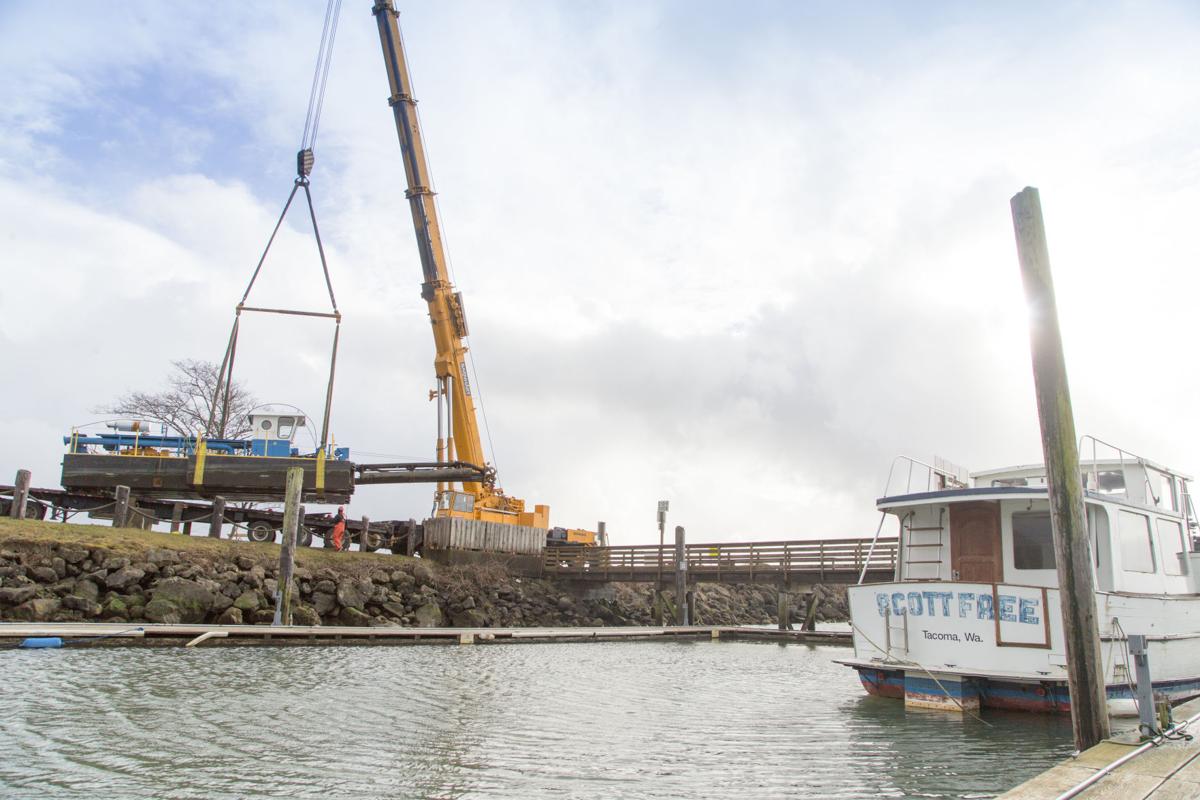 Ilwaco's dredge was moved by highway to the Port of Chinook in late January, allowing much-needed maintenance work to commence in Chinook, which has seriously silted up. Windy conditions on moving day made the job more difficult than it otherwise would have been.

CHINOOK — Annual dredging has commenced at the Port of Chinook. The mission this year is to remove as much as 15,000 cubic yards of material that have accumulated at the port.

“We are budgeting on 30 operational days of dredging, which would be approximately 300 operation hours,” said Port Manager Guy Glenn Jr. in a Jan. 27 email.

“The entire budget for dredging in the Chinook Marina this season is around $120,000, which we are targeting. If all goes as planned, as much as 15,000 cubic yards of material will be removed.” The port is permitted to do annual maintenance dredging from Nov. 1 though Feb. 28, referred to as the “in-water work window,” designed to avoid potential impacts on migrating salmon.

Barring any disruptions, the port is planning to dredge through Feb. 28 and may ask for an extension into March. The Port of Chinook marina is permitted to minus 10 feet in the commercial dock area and minus 8 feet in the recreational dock areas, Glenn said. Currently, however, depths vary throughout the marina — ranging from 3.5 feet to 9 feet.

The Port of Chinook and Port of Ilwaco approved an interlocal agreement for Ilwaco to provide dredging services, with the Ilwaco dredge in Chinook earlier this month.

“Our staff has done a great job mobilizing the dredge to Chinook,” Glenn said.

“We are operating within a very tight timeframe and in a new environment at Chinook, which will continue to present challenges for us. Thankfully, we had only planned on dredging November through December in our Ilwaco marina and, as a result, were able to mobilize our Ilwaco dredge to Chinook in mid-January. The Ilwaco dredge is larger and more productive than the Chinook dredge.”

The Port of Ilwaco Commission supports commercial and recreational fishing and understands the importance of the Port of Chinook in our community, Glenn said. Chinook’s dredge sinking in December was a significant loss for that port. The cost of mobilizing and operating Ilwaco’s dredge in Chinook this year would have exceeded Chinook’s dredging budget, and dredging this season would not have been performed, without the support of the Port of Ilwaco Commission, according to Glenn.

In addition, “Dredging in the Chinook marina this year would not have been possible without the support of the Port’s insurance company, Enduris,” Glenn said.

“This project demonstrates how both port districts are working together for the mutual benefit of our community.”

While the dredge is now running, significant obstacles are still ahead, particularly regarding what to do with the waste material once it’s been pumped from the port. One of the main challenges in Chinook is the lack of capacity in their upland dredge material placement site.

Both the Port of Ilwaco and Port of Chinook are developing plans to address the lack of capacity to handle additional dredge material in their upland sites. Once a plan is finalized, the ports will be seeking funding from the state and federal governments to assist efforts. This is an immediate challenge for both ports, but more so in Chinook, and future dredging efforts will be constrained without adequate capacity for placement of the dredge material. Additional alternatives will also be explored, such as beneficial reuse of the material in water.

The ability of the ports to develop these alternatives is limited, due to financial constraints, and the ports hope to continue working with elected officials and agencies on short- and long-term marina dredging solutions.