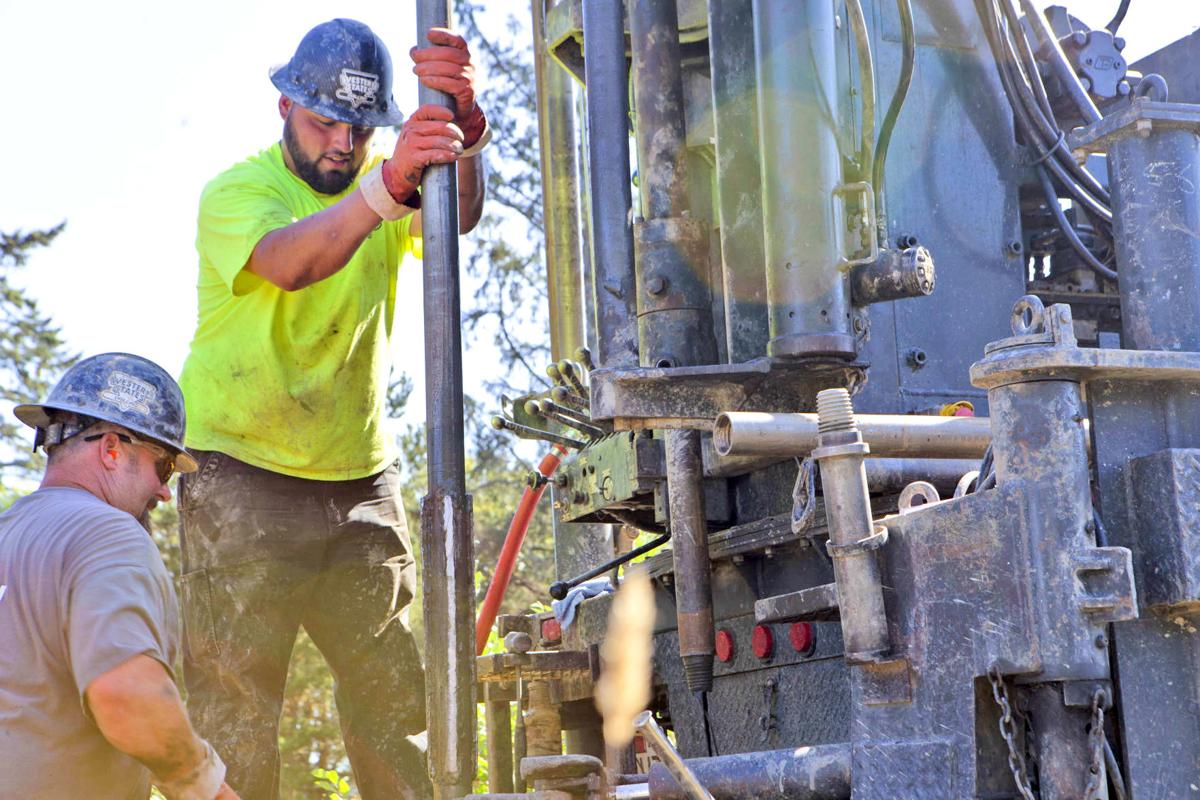 Drilling Supervisor Brad Wright stands clear as Driller Sam Moreno sets the drill in place. The men work for Hart Crowser and were in Tokeland Monday to drill out samples of the earth where the Shoalwater Bay Indian Tribe plan to erect a tsunami evacuation tower. 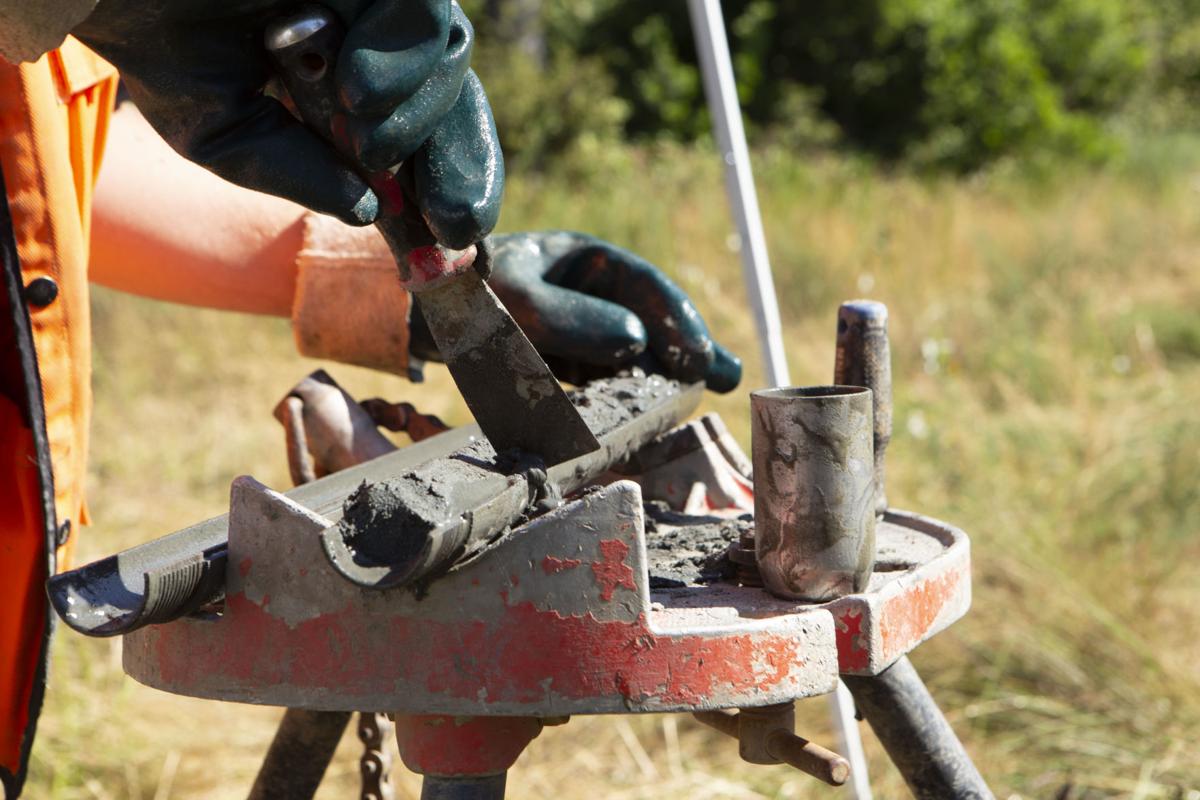 Geologist Daniel Knapp scraps away the edges of a soil sample taken at 50 feet. Knapp was in Tokeland Monday to analyze the earth where the Shoalwater Bay Indian Tribe plan to erect a tsunami evacuation tower. 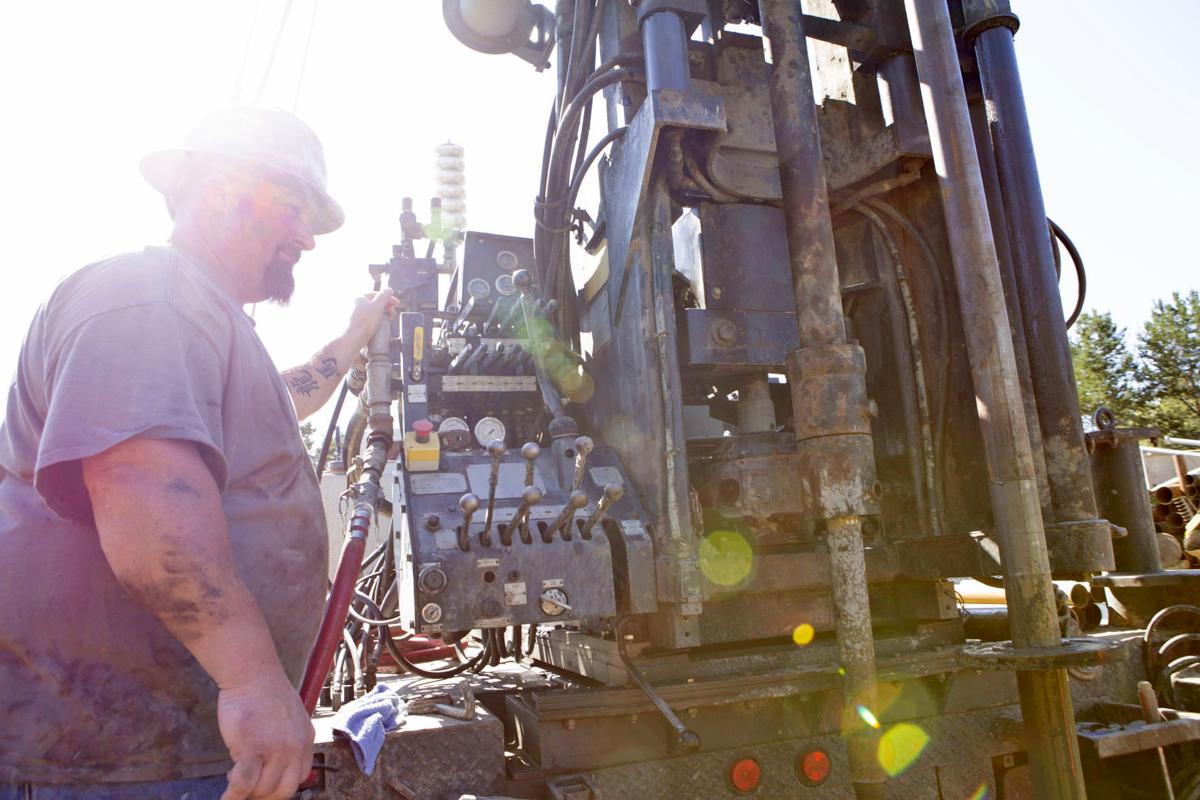 Brad Wright, a drilling supervisor for Hart Crowser, waits to start hammering into the earth again. Wright was in Tokeland Monday to drill out samples of the earth where the Shoalwater Bay Indian Tribe plan to erect a tsunami evacuation tower. 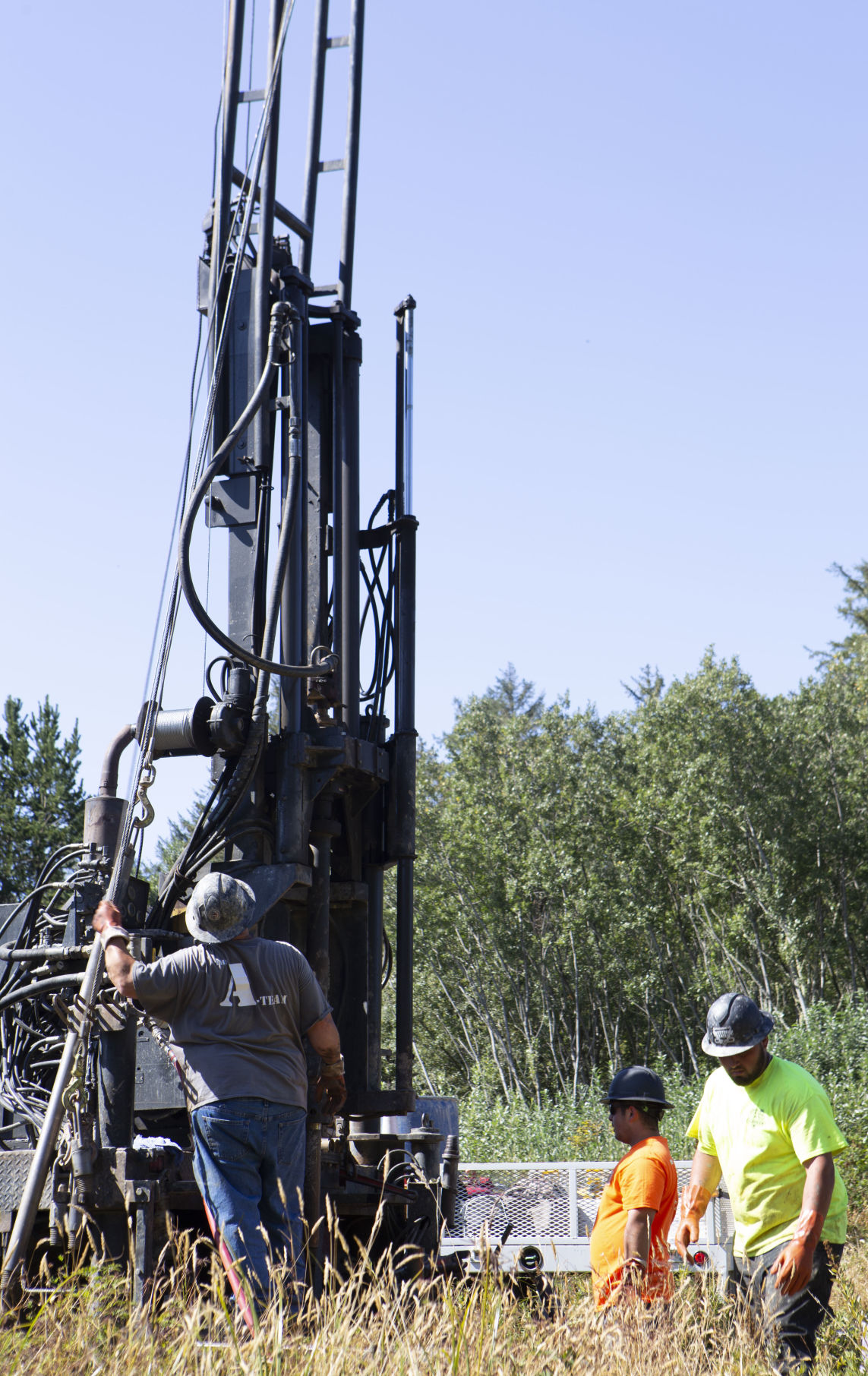 Drillers Brad Wright, Kevin Delgado and Sam Moreno get ready to resume drilling after swapping out a soil sample. Wright is a drilling supervisor and was training Delgado as it was his first day on the job. The three men work for Hart Crowser and were in Tokeland Monday to drill out samples of the earth where the Shoalwater Bay Indian Tribe plans to erect a tsunami evacuation tower.

TOKELAND — The drillers counted each sharp thunk of their machine, keeping track of the blow count, something needed to help engineers understand how to anchor a tsunami evacuation tower in the wet, sandy soil.

Three drillers and a geologist were in Tokeland Monday gathering soil samples at the site where the Shoalwater Bay Indian Tribe plans to construct a vertical evacuation structure. The tribe’s tower will likely be the second built on Washington’s coast. The same team of engineers, geologists and architects working on the Tokeland tower are helping Pacific County Fire District No. 1 study whether a similar evacuation tower could be built on the Peninsula.

If the fire district study finds it is possible to build a combination training center and evacuation tower, the district can apply for a Federal Emergency Management Agency construction grant. But only if additional money can be found locally, Weatherby said. He sees this as the biggest challenge for the project, as the fire district or Pacific County Emergency Management will have to pay about 25 percent of construction costs.

The team designing the tower is still working out how many people the building would need to hold and how tall it would need to be, as well as how to keep the training facility secure while still being accessible to the public in the event of a tsunami.

“The study will look at everything from (A) access to (Z) zoning,” Weatherby wrote in an email to the Chinook Observer last week.

The Tokeland tower project has started to address the zoning concerns in the area. The site where the tribe plans to build the tower isn’t on the reservation and so it is subject to county ordinances.

The Pacific County Commissioners met to discuss the tower late week. A lot of dull stuff has to be dealt with before these structures can be built, said Commission Chairman Frank Wolfe, who represents the Peninsula.

“We asked the Department of Community Development to come up with some reasonable building regulations while at the same time not opening Pandora’s box,” Wolfe said.

What Wolfe doesn’t want is for the tsunami tower exception to lead to a lot of people building very tall houses, he said.

If the building height exception is allowed for the Tokeland tsunami evacuation tower, it will be another step forward for not just the tribe’s project, but also for Pacific County Fire District No. 1.

‘It gave us all hope’

The team mentality behind getting these structures built is a point of pride for Lee Shipman, the Shoalwater Bay tribe emergency management director. The people and agencies working on these projects are passionate about saving lives, she said. She credits the tsunami readiness roundtables and Project Safe Haven meetings as helping to make these projects seem plausible.

“It gave us all hope,” Shipman said.

The tribe applied for a $2.2 million grant from FEMA to fund the project and set aside $1 million of its own money as the local match needed to get the funding. The University of Washington and other experts from Hart Crowser and Degenkolb Engineers, the engineering firm partnering on the project, have bent over backwards to get the tribe the information it needed to apply for the FEMA grant, Shipman said.

“We have in turn shared all that information with other communities to get their projects going,” Shipman said.

The Shoalwater Bay Indian Tribe plans to have the tower built by October 2020. Unlike the tower being planned by the fire district, the tribe’s tower will be solely for saving lives in the event of a tsunami. The reservation already has a tsunami evacuation road up a hill that would be above the height of a tsunami. But given the tribe’s proximity to Tokeland, it sees the tower as a way to save their neighbors, Shipman said.

“Ocosta is the trailblazer,” Trisler said.

The same year the Ocosta school finished its refugee, the American Society for Civil Engineers codified best practices on how to build these structures. Trisler has since joined the committee of engineers who update and write standards for tsunami safe structures. Now not only will the teams on the Washington coast learn from project-to-project, but the whole industry is learning and updating tsunami building standards, Trisler said..

The soil samples being taken in Tokeland will be brought to Trisler and his team so they can model how the soil will behave during an earthquake and tsunami. After pulling up a couple samples, the geologist on site Daniel Knapp said the site was made up of bay mud, like many areas of the Peninsula.

“It doesn’t stain your fingers,” Knapp said, rubbing the wet sand between his fingers. “Some sand will have particles so small it will get in between your fingerprint.”

Knapp puts the soil sample into a Ziploc bag and records the depth. One sample stays in the metal tube in which it was taken. Knapp uses a blowtorch to melt wax over the top of the soil in the tube. This will be a better example of how the soil looked when the sample was taken, Knapp said. Geotechnical engineers will then cut the metal tube open and put it on a shake table, another chance to model the sand in earthquake conditions.

What it is likely to reveal is that the wet sand will turn into something similar to quicksand during an earthquake, Knapp said.

While many will see the soaring evacuation tower, much of the work Trisler and Knapp will do will be buried underneath. But without a proper foundation the tower could be useless, Trisler said.

While the sandy, moist soil isn’t ideal for anchoring a multi-story building, there are techniques to make the ground stable and there are foundations that Trisler’s team can build that can resist problems with the ground. Even if that means anchoring the foundation up to 100 feet deep.

“Once the soils have revealed themselves we will make a solution that will make it work,” Trisler said.

The team drilled about 75 feet the first day and will continue to drill until at the latest Thursday. The site of the drilling is just past Blackberry Lane on State Route 105.

Evacuation structures are also currently planned for Aberdeen, Ocean Shores and Brookings Harbor as well as some in Oregon, one in California and one in Hawaii. It has been estimated that several could be needed just for the Peninsula, in order to keep evacuation distances to a mile or less.