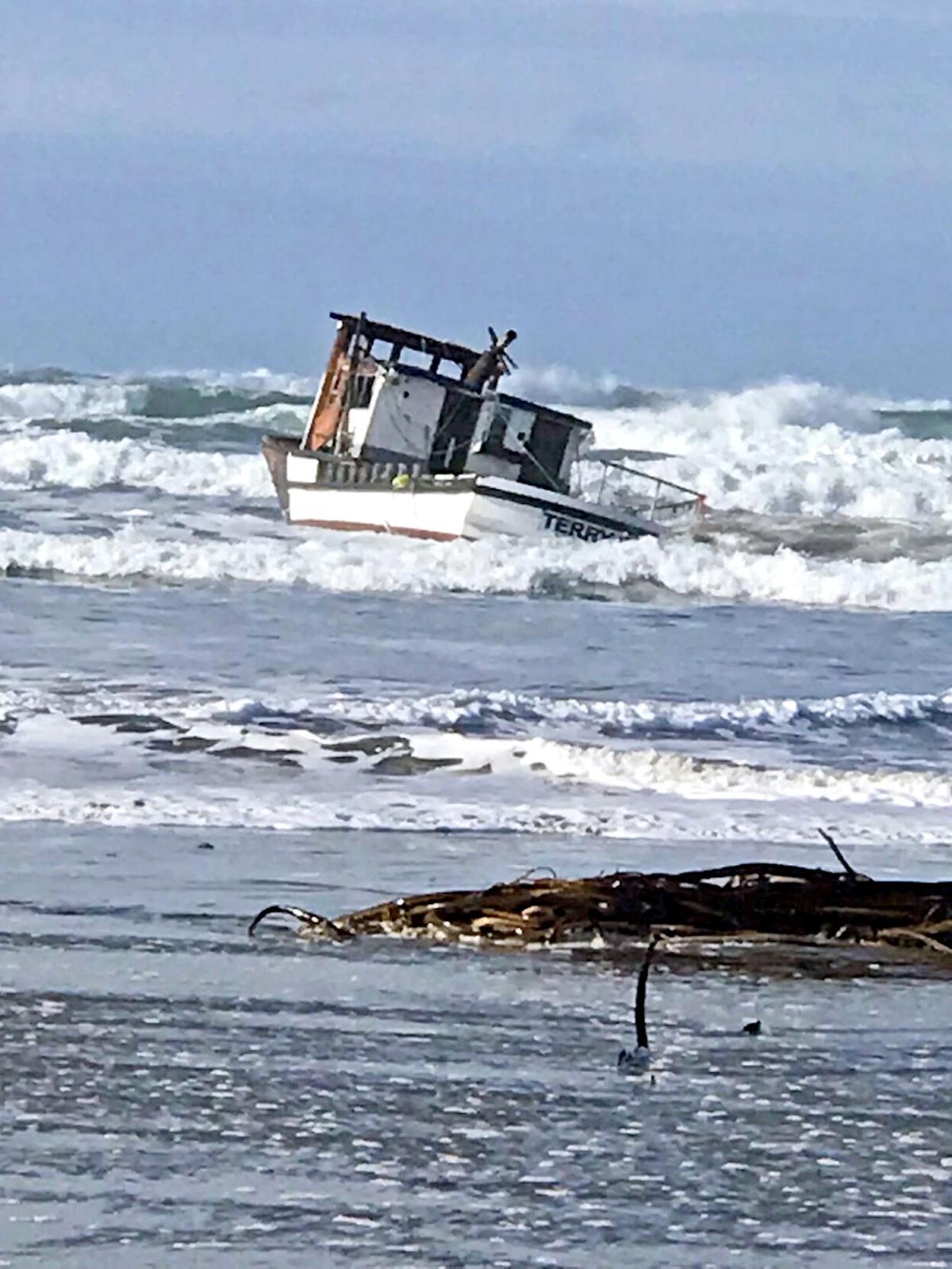 The 50-foot crabber Terry F washed ashore near Leadbetter Point after the crew was rescued at sea. 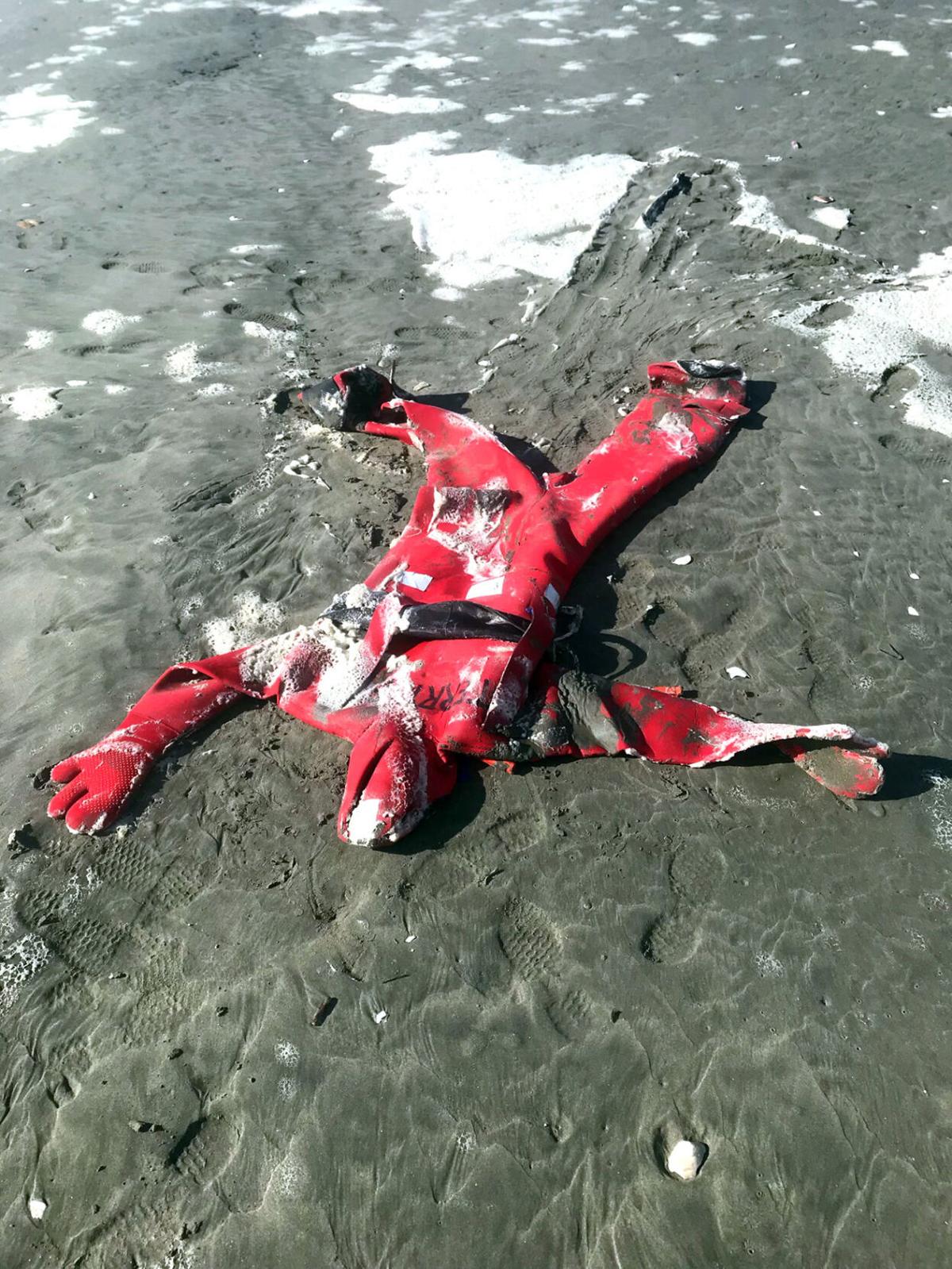 An empty survival suit from the Terry F offers a stark reminder of the dangers of the commercial Dungeness crab season. 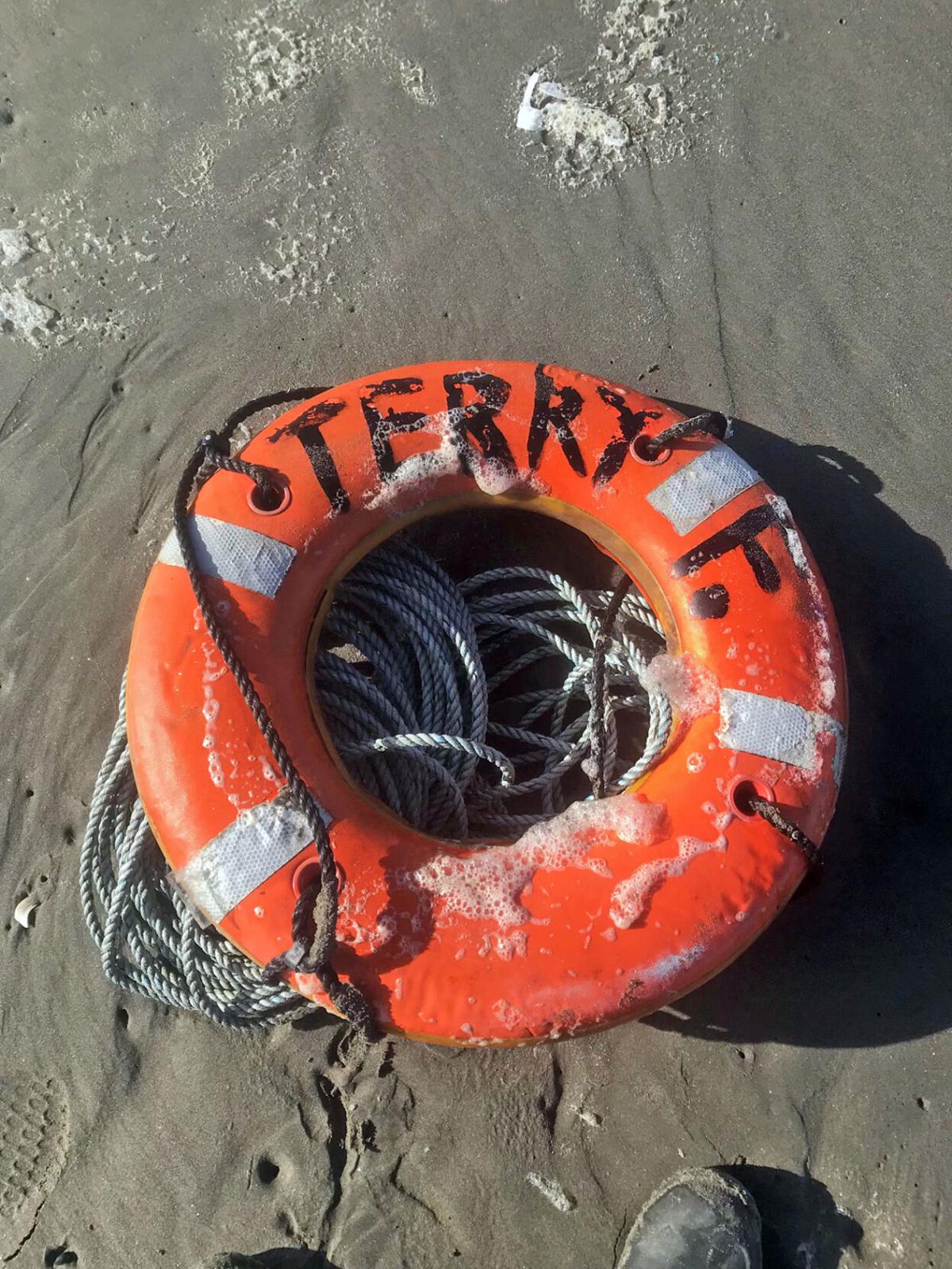 This life ring and other debris from the Terry F washed on on peninsula sands after the crabber broke up in the surf zone.

The 50-foot crabber Terry F washed ashore near Leadbetter Point after the crew was rescued at sea.

An empty survival suit from the Terry F offers a stark reminder of the dangers of the commercial Dungeness crab season.

This life ring and other debris from the Terry F washed on on peninsula sands after the crabber broke up in the surf zone.

LEADBETTER — Gear put-in day, “dump day” is it’s known, for one Westport coastal commercial Dungeness crab fisherman turned tragic Feb. 13, with the loss of a vessel and the loss of a beloved pet in two separate incidents just hours apart.

Matt Finley, two crew members and Finley’s dog, Shelley, were heading out of Westport Saturday morning in the 50-foot Terry F and quickly ran into trouble a few miles off the coast of Willapa Bay.

“The weather was terrible on the ocean, and as the boat rocked the pots began to shift, eventually the railing broke loose and the heavy weight of the pots tipped the boat,” said Finley’s sister, Lawauna Cappa, on a GoFundMe page set up for Finley. “The fishing vessel began taking on water and sinking.”

The helicopter got to the area 10 minutes later and found the vessel drifting toward hazardous breaking surf near the shore. A radio was lowered to the crew and the Terry F occupants were instructed to enter the water, one at a time, to be recovered by the Coast Guard rescue swimmer.

All three crew members, and the dog, were recovered by 9:15 a.m. and were taken to the Westport Airport. All were in stable condition and the crew declined medical assistance, according to the Coast Guard report.

The Coast Guard lauded the fast action of the crew in the successful recovery.

“The crew’s fast action to notify our watchstanders and put on those survival suits saved their lives,” said Lt. Cdm. Jason Joll, pilot and flight commander. “They had those suits on and were ready to go when we arrived on scene.”

The Terry F subsequently capsized and broke apart in the surf, and the vessel’s emergency position indicating radio beacon was recovered by the Coast Guard in the vicinity of Willapa Bay inlet.

“I am thankful that my brother, his two crewmen, and his dog were all rescued,” said Cappa after the rescue. “The fishing vessel is a loss…it was Matt’s livelihood and his home. All of his belongings were on the boat, he has the clothes on his back.”

With his entire life wrapped up in the Terry F, when Finley heard later in the day the vessel was washing ashore he took Shelly and went to try to salvage what he could.

“As he was coming back something happened and he hit a telephone pole in Grayland,” said Cappa. “The impact wrecked his truck and unfortunately his trusty sidekick Shelly did not make it.”

According to the State Patrol, Finley was northbound on State Route 105 near mile post 26 at around 7:38 p.m. — about 10 hours after his water rescue — when his vehicle left the roadway off the northbound shoulder and struck a power pole head-on. He was transported to Grays Harbor Community Hospital for his injuries.

“He was taken to [the hospital] and transferred [Feb. 14] morning to a hospital in Tacoma,” said Cappa. “He suffered a broken nose, split his tongue, broken ribs, bruised lungs, and some other injuries.”

Cappa continued, “Shelly was Matt’s fur baby, she went everywhere with him and was on the boat yesterday morning as well. I know that this will be the hardest part of the loss he is experiencing.” Grateful her brother was alive, she said, “It will take some time for him to heal physically and emotionally from this, but I am thankful that he will and that he has so many people in his life who care.”

Monday, Cappa posted on her Facebook page that Finley was to undergo more surgery that day.

On Feb. 14, the state Department of Ecology spills team visited the scene where the Terry F came ashore, near the north tip of Leadbetter Point State Park, as the Coast Guard confirmed there was a spill.

“Word I’ve gotten from responders is that they found two diesel tanks on the vessel,” said Ecology spokesman Ty Keltner on Feb. 15. “The contractor that was hired is Global Diving and Salvage. They were able to defuel the boat this morning.”

At the time Ecology was unsure how much fuel the vessel had lost. “Right now they are working on a removal plan to deconstruct the vessel on site and remove it piece by piece,” said Keltner.