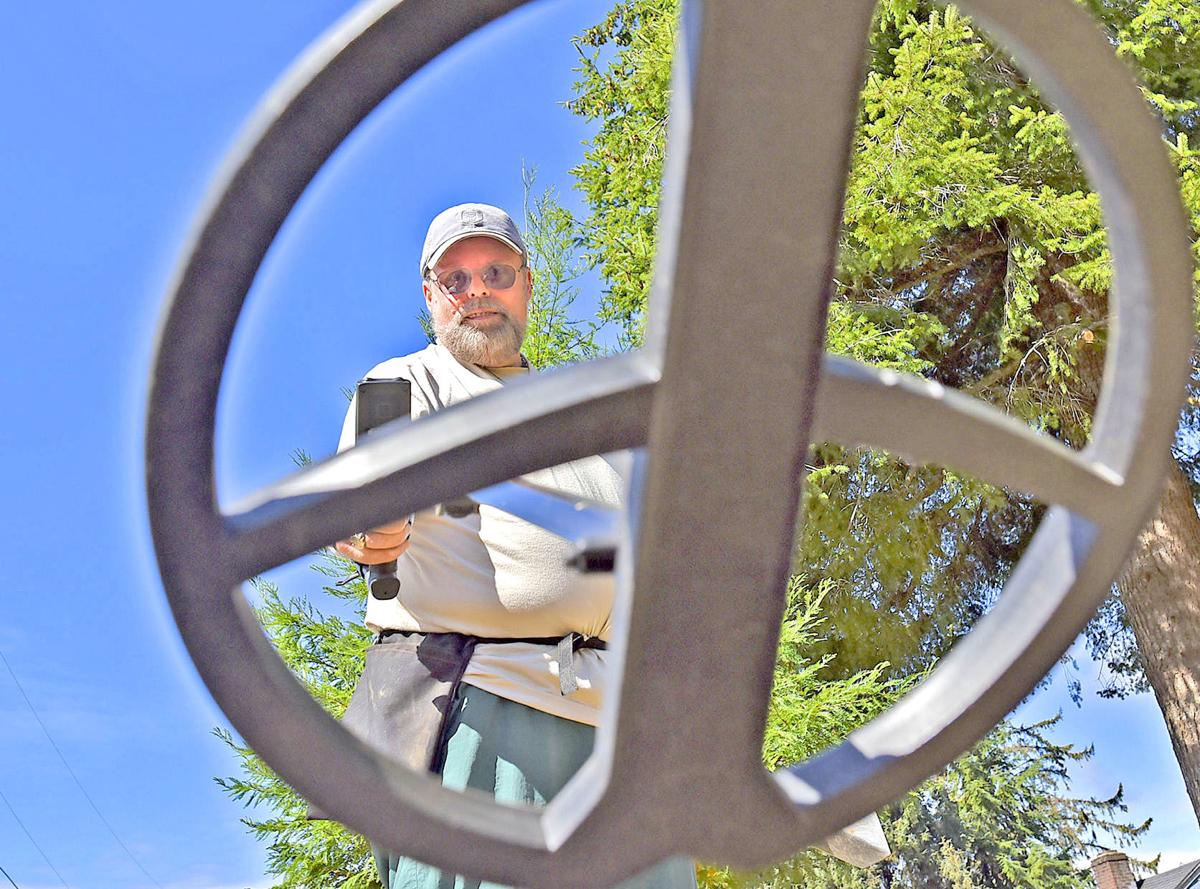 Don Kelly moves his metal detector slowly over the ground looking for buried items on a friend’s property near Astoria in 2018. He was upset to hear about the looting at the national park. 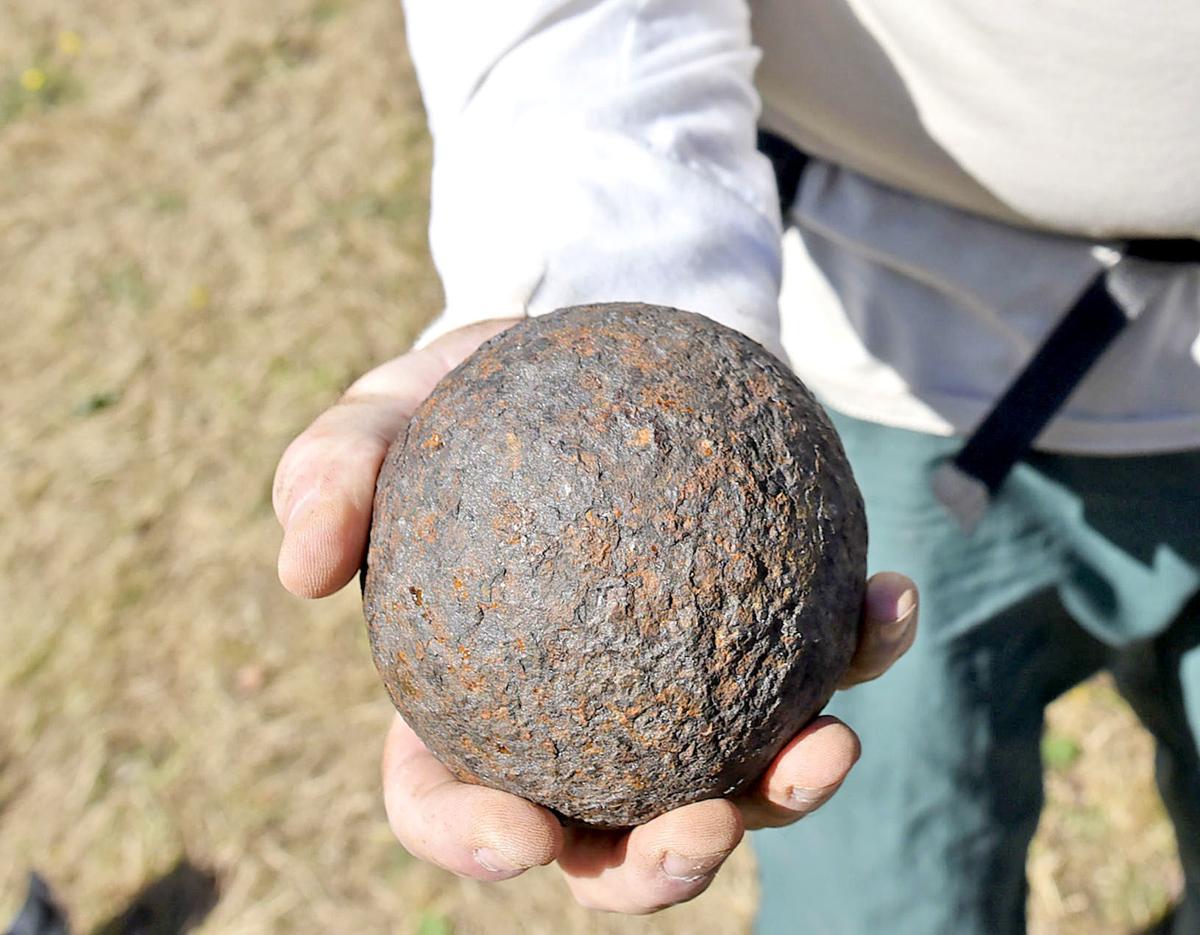 Don Kelly shows off one of his favorite finds with a metal detector: an antique cannonball. 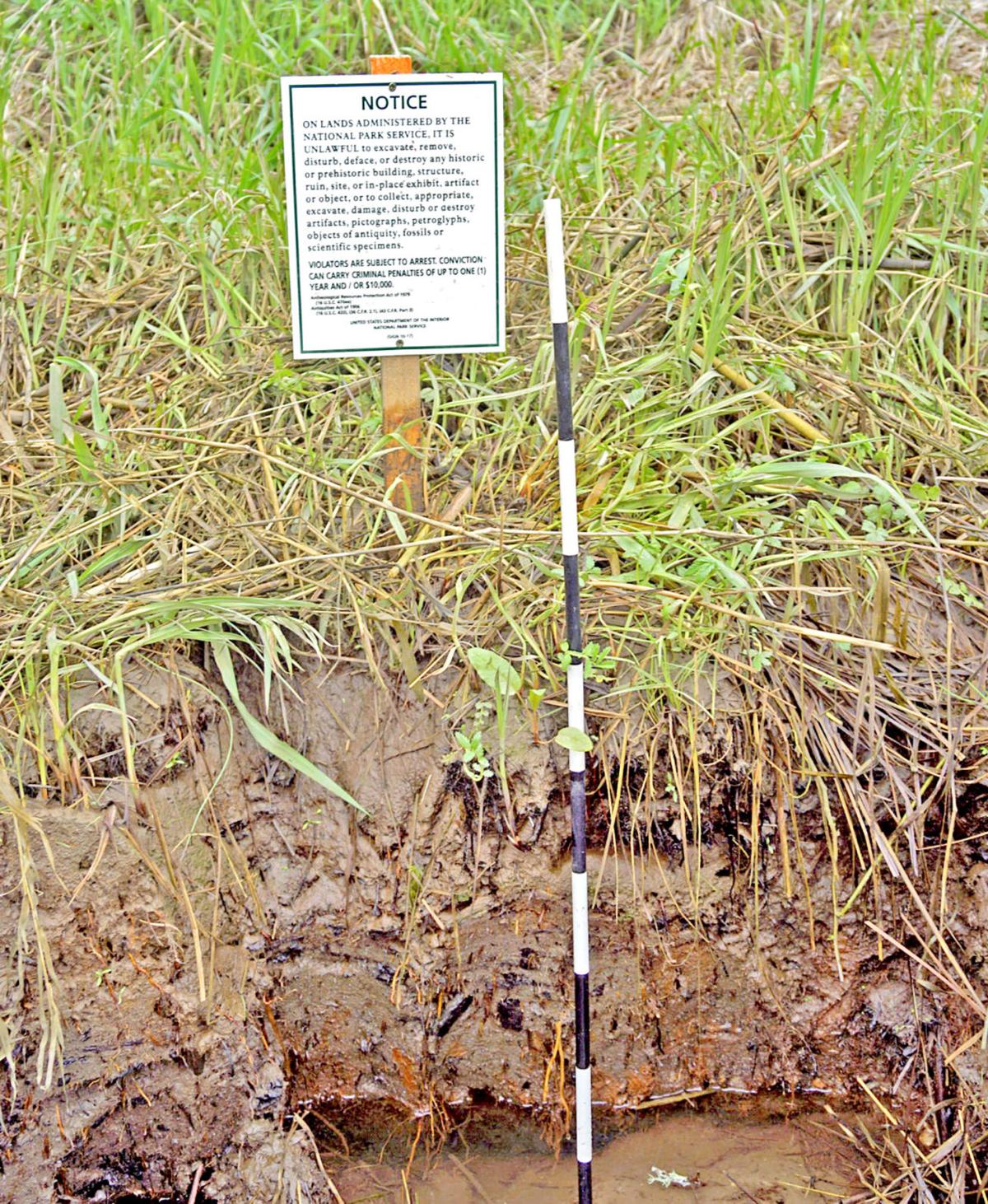 A marker shows the depth of a hole dug by looters at Lewis and Clark National Historical Park.

Don Kelly moves his metal detector slowly over the ground looking for buried items on a friend’s property near Astoria in 2018. He was upset to hear about the looting at the national park.

Don Kelly shows off one of his favorite finds with a metal detector: an antique cannonball.

A marker shows the depth of a hole dug by looters at Lewis and Clark National Historical Park.

When looting at the Fort Clatsop Unit of Lewis and Clark National Historical Park in March turned a protected archaeological site into a mud pit, digging — specifically illegal digging — was already on the minds of some park staff.

The 2019 Our Coast magazine included an article about self-described “mud larkers,” amateur archaeologists and treasure hunters who use metal detectors to find historic artifacts.

Park Superintendent Jon Burpee, concerned by the response to the hobby, drafted a letter in response.

“While I share their enthusiasm for our local history,” he wrote, “I would like to echo the guidance to call ahead to understand what restrictions may be in place.”

The national park was established by Congress to protect natural and cultural resources, he continued.

“These resources do not belong to any one individual, but to the entire country and future generations.”

The diggers who hit the park near the Netul River Trail used metal detectors to find and remove historic artifacts — a potential federal felony. They left behind nine deep holes and when they dug away at a riverbank, they also damaged a rare plant community.

The park does not know who was behind the crime, and these kinds of cases are notoriously difficult to solve.

Chris Clatterbuck, resource program manager at the national park, sees one positive in the whole situation: “There’s a growing awareness throughout the community of what ethical metal detecting is.”

He added, hopefully, “The person who did this probably just didn’t know the rules.”

Don Kelly was dismayed when he heard about the looting.

“It really upset me that people would desecrate historical sites,” he said.

Kelly, an Astoria native, has been mud larking — he prefers the term “dirt fishing” — for 50 years. He is the administrator of the Facebook group Northwest Artifact Recovery Team and prides himself on a careful, conscientious approach to the hobby.

Research is always the first step before he starts digging, he said. Many of his hunts take place on private land. He doesn’t sell what he finds, hauls away any trash and fills in the holes he makes before he leaves.

“All the people I have dug with are respectful of our laws and code of ethics regarding metal detectors,” Kelly said, adding that illegal digs hurt the people who follow the rules.

Kelly worries a dig like the one at Lewis and Clark could begin to limit where he and others are allowed to dig in the future.

“A true ‘detectorist’ is not just a coin and jewelry hunter, but one who loves history and preserves it before it is gone forever,” he said.

However, park staff say some amateur diggers may be damaging more history than they are saving. Small items can tell big stories, but when people pull them out of their context, jumble them with other items in shovel-scoops of dirt, or even toss them aside because they’re not obviously interesting, those stories are lost.

It’s a lesson the park learned the hard way.

In the early 1940s and ‘50s, professionals dug where they believed the original Fort Clatsop was located.

“They were using heavy machinery to do the excavations,” Clatterbuck said. “They never sifted the dirt.”

Decades later, more advanced technology designed to pick out abnormalities in the ground found the scars of this trenching. It is possible the rough work by earlier archaeologists destroyed a chance to see the fort’s original foundation.

“Now, in modern archaeology, you take it very slowly, layer by layer, and as you put the dirt through these screens you can find smaller objects — like a trade bead, for example — that can be incredibly important,” Clatterbuck said.

A trade bead found next to a fragment of porcelain only made in a certain era and found in one layer of soil tells a particular story. That same bead, hastily excavated and jumbled in a pile of dirt next to a modern-day plastic bag — not so much.

“Because of those lessons where we’ve seen, ‘Oh, if what they did 50 years ago wasn’t the best and it damaged the site,’ we ask, ‘Are we doing anything that, 50 years from now, people will look back and wish we hadn’t done?’”

For this reason, the park had documented the site that was looted at Lewis and Clark in detail and probed small sections but never fully excavated it. The items at the site date back about 100 years and do not include any native Clatsop artifacts.

The people who dug at the park in March not only removed artifacts, they also destroyed the story those items might have told.

Clatsop and Pacific counties are steeped in history and the national park is not alone in dealing with would-be archaeologists.

Fort Stevens State Park is home to a historic military site, as well as the skeletal remains of the Peter Iredale shipwreck.

Like other shipwrecks in Oregon, the Iredale is a protected archaeological site. It is also a popular destination for tourists and, like the bunkers, outbuildings and Fort Stevens itself, it is right there in the open.

The amount of the wreck visible on the beach at any given time shifts with the sands and the tides, but one rusting end of the barque is always prominent and presents a tempting — but dangerous — jungle gym to visitors looking for a more dramatic photo op.

Metal detectors can be used on most Oregon beaches, but it is illegal to dig or use a metal detector in Fort Stevens State Park and around the shipwreck.

“From time to time folks do some kind of amateur investigations (in the park),” said Justin Parker, the park manager. With the Iredale, “our biggest concern with that is we don’t want people trying to take pieces of it home as souvenirs.”

Farther south, Ben Cox, manager of the state’s Nehalem Bay Management Unit, has not had to deal with illegal digging in the three years he’s been in charge. However, the legend of buried treasure at Neahkahnie Mountain caused plenty of headaches in the past.

“The lore passed along to me paints a vivid picture of people poking potholes probing for plunder — with zero respect for cultural and natural resources,” Cox said.

There is no proof the treasure ever existed, but native stories, rocks inscribed with strange marks and a centuries-old shipwreck on Nehalem Spit fueled rumors for decades. Neahkahnie got the moniker “mountain of a thousand holes” because of the intensive treasure hunting.

An executive director of the Tillamook County Pioneer Museum told Portland Monthly in 2011 that the legend was a ploy by Manzanita to “entice new residents to buy land in the area.”

Today, Cox and rangers avoid talking about the legend, not wanting to trigger would-be treasure seekers.

Lewis and Clark National Historical Park has worked with outside groups to professionally investigate artifacts in the park. Fifteen years ago extensive professional archaeological work uncovered numerous objects of historical interest but no monetary value at the park’s Middle Village/Station Camp Unit east of Chinook. In 2015, a team from the then newly formed Maritime Archaeological Society made detailed measurements and drawings of the remains of a wooden boat, partially submerged in a creek on park property.

Part of the boat’s story — a 1920s gillnetter used by dairy farmers to haul product to market long before the national park arrived — is about where it rests now. For other vessels in Clatsop County, the society has chosen to simply document rather than push for excavation.

It is expensive to excavate and restore historic vessels, but there is also the thought that, at the very least, a boat is documented and listed with the state. Maybe in the future, someone else will come along with the resources to go through the long, difficult process of a full excavation.

But Chris Dewey, the president of the Maritime Archaeological Society, said you can’t avoid disturbing a site in the end.

“That’s always an issue with archaeology,” he said. “We investigate something and we tend to destroy it if we go too far.”

In one effort to address this issue, the Archaeological Conservancy acquired the site of an Indian village on the Long Beach Peninsula with the express intention of leaving it undisturbed awaiting technology that might permit thorough non-invasive study.