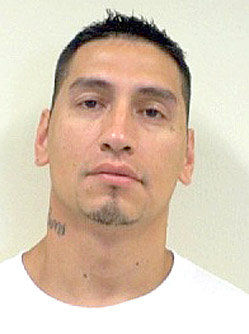 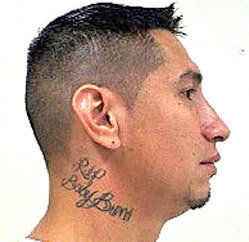 ILWACO — Luis Alberto Ruiz, 35, might be having second thoughts about getting the large, distinctive “R.I.P. Baby Burns” tattoo on his neck.

After allegedly living as a fugitive for nearly a year and moving to the area under an assumed name, the tattoo helped Long Beach Police officers confirm his identity when they arrested him at gunpoint in the office of ASAP Business Solutions in the Port of Ilwaco on Oct. 1.

Ruiz, a convicted sex offender, was placed on a federal “Most Wanted” list in February after he stopped complying with the terms of his community supervision. He came to the attention of local police about a month ago, when the U.S. Marshals Pacific Northwest Violent Offender Task Force learned that he was working at Jessie’s Ilwaco Fish Company.

On Oct. 8, Kendall Rivers, human resources manager for Jessie’s, said that Ruiz was employed by ASAP, the neighboring labor agency that provides many of Jessie’s workers. She said staff at Jessie’s didn’t learn that he was a wanted criminal until his arrest.

As part of their hiring process, ASAP routinely verifies the identity documents that workers list on their I-9 tax forms, Rivers said. The verification process might have revealed problems with Ruiz’s Social Security number or other identity documents, but because he was using someone else’s name, managers at Jessie’s and ASAP could not have known that he was a potentially dangerous fugitive.

When contacted by phone on Oct. 8, a woman who identified herself as an office manager for ASAP confirmed that the company provides many Jessie’s workers, but would not give any further comment.

“Nope. I’m not gonna talk about that at all,” the woman said, and hung up.

Ruiz was convicted of fourth-degree assault and harassment in 2008, fourth-degree assault in 2009, and third-degree rape of a child and possession of a dangerous weapon in 2012, according to an August story from news channel Fox13. Chinook Observer archives show he was booked into Pacific County Jail in December 2008, March 2009, June 2009 and December 2012.

He was released from state prison and began 36 months of court-ordered community supervision in August 2014, Andrew Garber, a spokesperson for the Washington State Department of Corrections, said on Oct. 8.

As part of the conditions for release from prison, Ruiz promised to regularly check in with his community corrections officer and be available for appointments as directed. As a level two-sex offender, he was also obligated to register with the Grays Harbor County Sheriff’s Office.

According to a DOC affidavit written last month, Ruiz was told to check in with the DOC office in Montesano in November 2014, but failed to report. When he failed to answer a corrections officer’s follow-up phone calls, the DOC sought a warrant for his arrest.

Members of the Task Force placed Ruiz on a list of wanted fugitives in February 2015.

In August, the Task Force believed Ruiz was hiding out in Grays Harbor County, and asked the public for tips. Then, sometime in August or September, investigators learned that Ruiz was working in Pacific County, and recommended that he be charged with escape.

Pacific County Jail employees told Wright that Ruiz was never a problem inmate when he was in custody in the past, but the three local officers who arrested him took extra precautions because of his status as a violent offender.

“The [Task Force] made this guy sound like he was armed and dangerous,” Wright said. “We didn’t take any chances. We took him down at gunpoint.”

Ruiz was arrested without incident, but one of the arresting officers said that first, he insisted they had “the wrong guy.” The officers pointed out that his large, distinctive neck tattoo was a dead give-away.