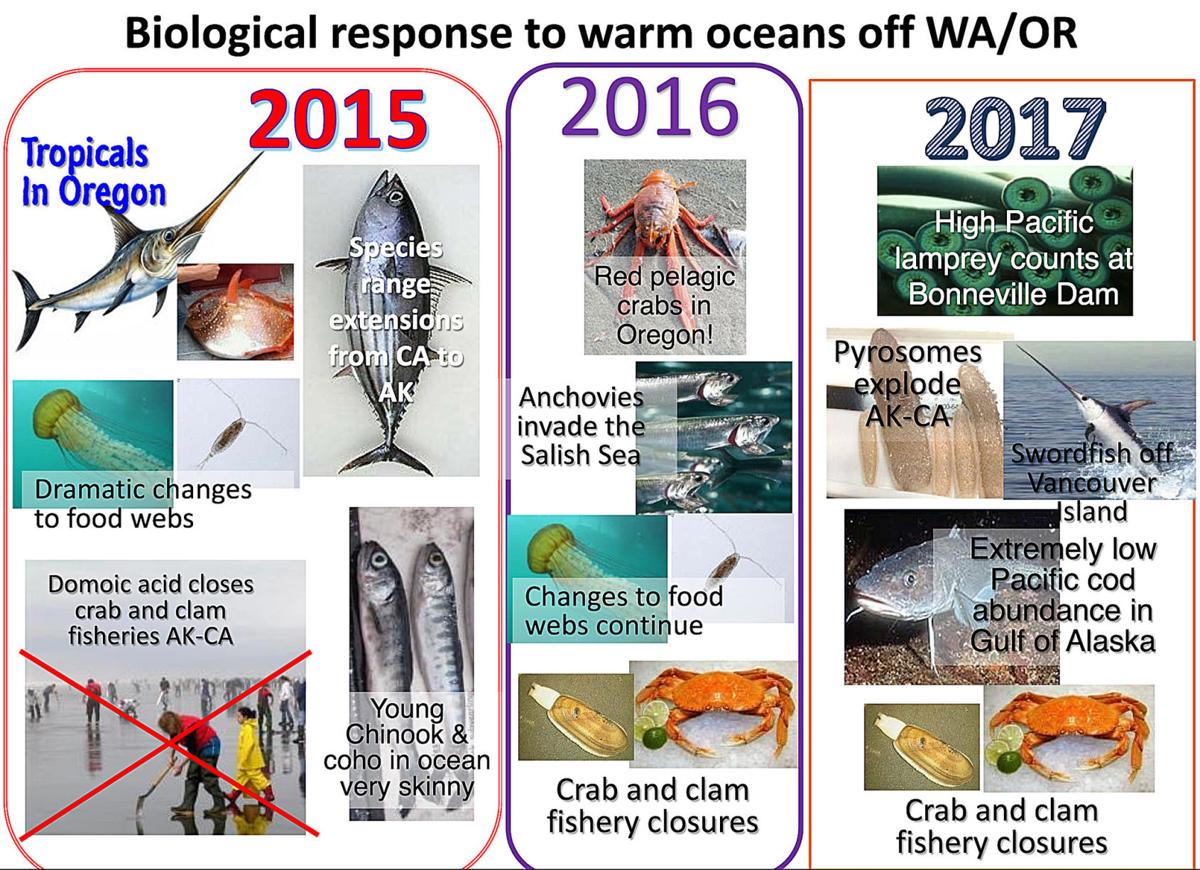 Warm ocean waters have had profound impacts on sealife. 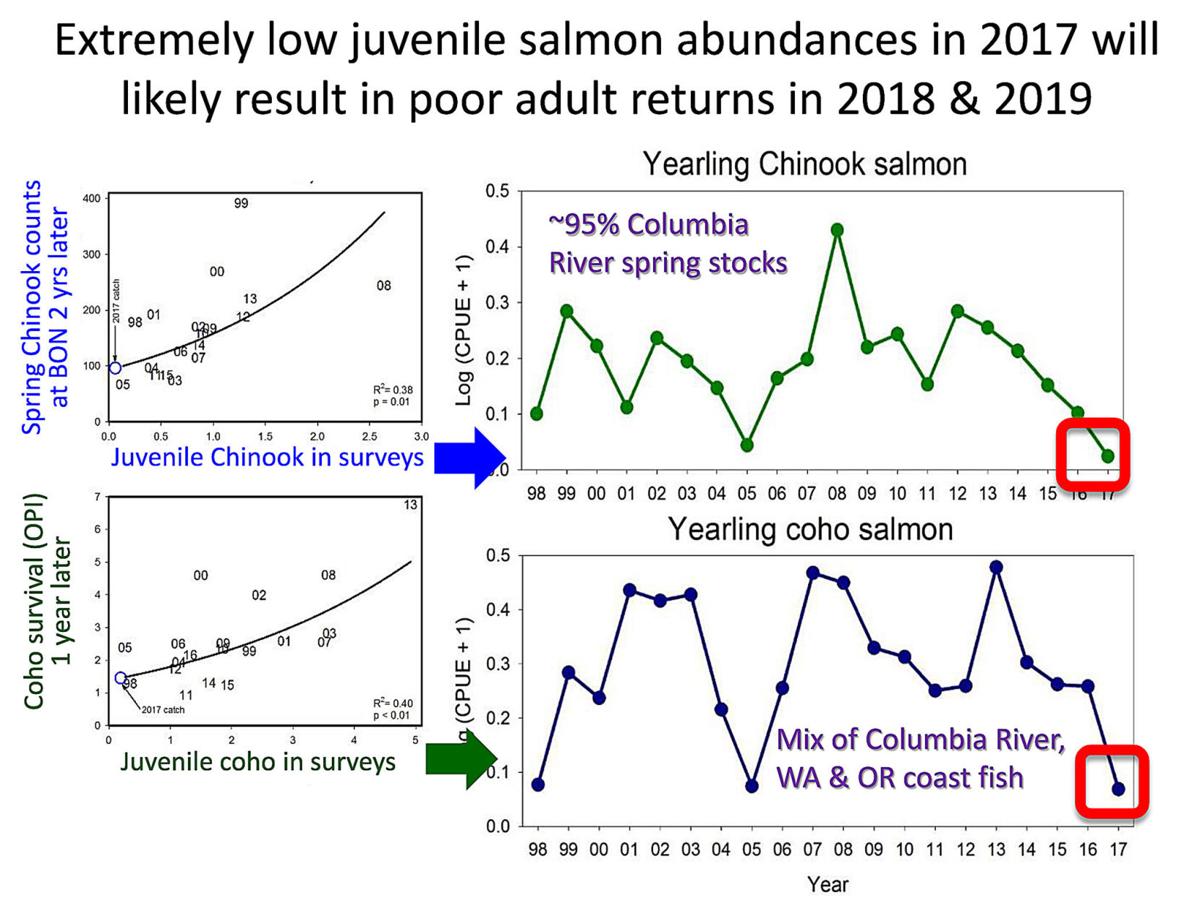 Poor ocean conditions are expected to result in lousy salmon returns this year and next. 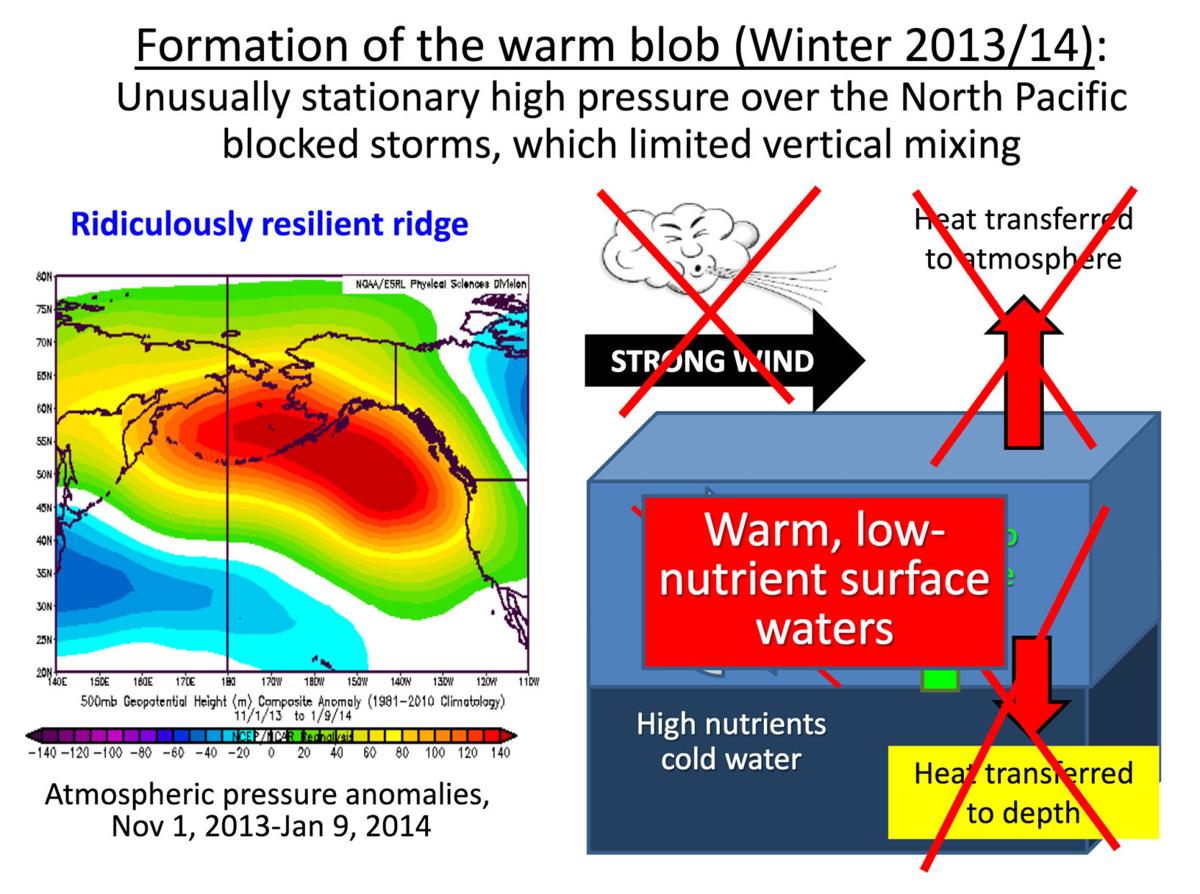 The warm-water Blob that dominated the North Pacific in the winter of 2013-14 produced poor conditions for salmon survival. The consequences are still being felt. 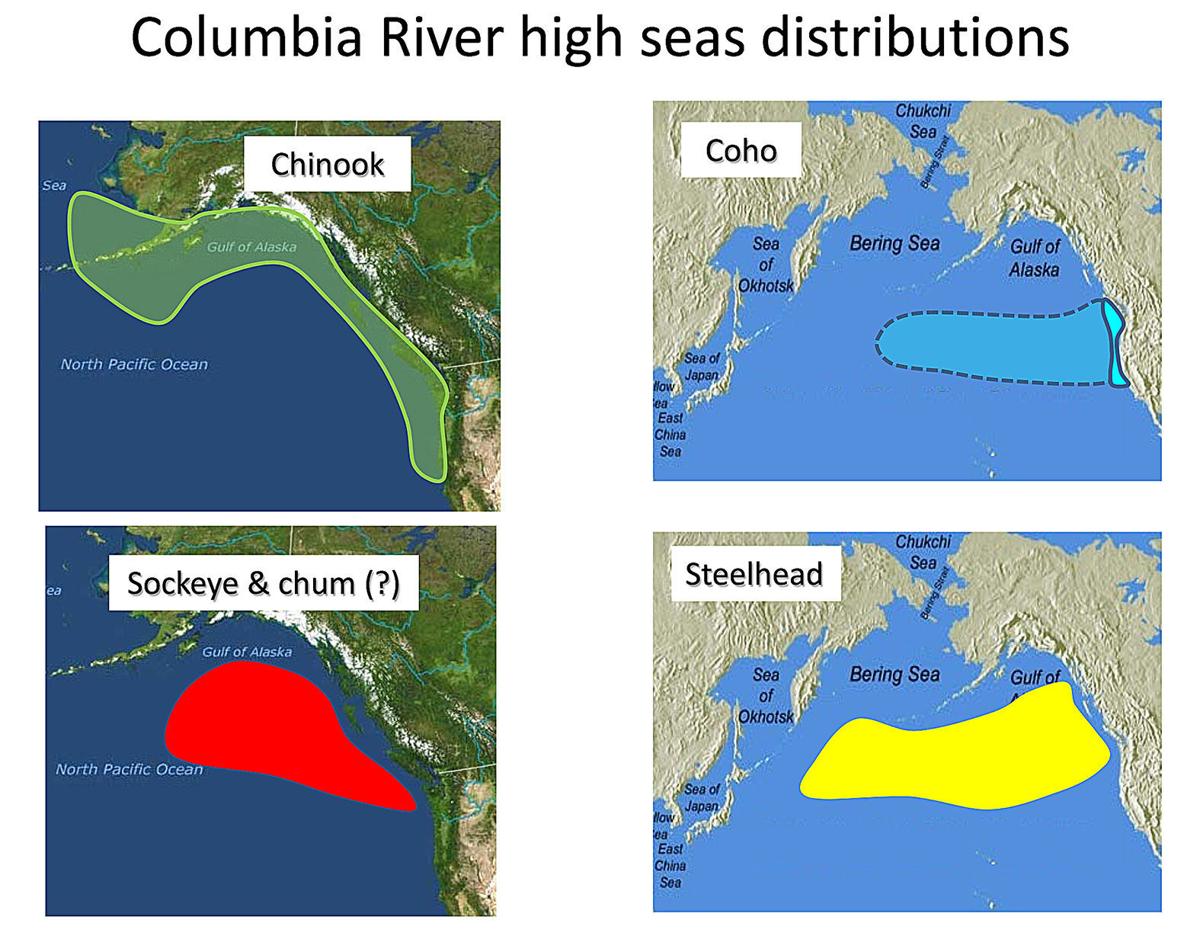 After departing the Columbia River, young salmon and steelhead disperse in differing directions depending on species, time of year and other factors.

Warm ocean waters have had profound impacts on sealife.

Poor ocean conditions are expected to result in lousy salmon returns this year and next.

The warm-water Blob that dominated the North Pacific in the winter of 2013-14 produced poor conditions for salmon survival. The consequences are still being felt.

After departing the Columbia River, young salmon and steelhead disperse in differing directions depending on species, time of year and other factors.

The initial period after ocean entry for Columbia River basin juvenile salmon and steelhead is when most of the mortality occurs during their lives at sea, so ocean conditions — temperatures and nutrient supplies — during that period are critical to how many of the fish will return to the river as adults one to three years later.

The path the fish take after they enter the ocean makes a difference, according Laurie Weitkamp of NOAA Fisheries’ Northwest Fisheries Science Center, Newport Field Station, especially lately with the “strange” ocean conditions.

Not all salmonids are the same, she said, and collectively that determines their marine survival.

For their first summer in the ocean spring Chinook, chum, sockeye and some coho head north along the coast into the Gulf of Alaska. Some of those Chinook have been caught as far north as the Bering Sea, Weitkamp said at last week’s Northwest Power and Conservation Council meeting, Jan. 10.

Fall Chinook and some coho remain in more local waters off the Oregon and Washington coastlines. And, steelhead appear to rapidly head straight out to sea, sometimes traveling nearly to Russia.

Weitkamp was at the meeting to brief the council on ocean conditions and how those conditions impact smolt survival and adult returns.

Weitkamp’s presentation, attached to a Jan. 3 Council memorandum, is at www.nwcouncil.org/media/7491479/3.pdf.

As adults on their return journey to the Columbia River, fall Chinook, chum and sockeye move south along the continental coastline; coho come in from Oregon and Washington coastal areas; and steelhead and spring Chinook move rapidly from their offshore positions towards the river.

Why is this important, she asked? Because, once at sea, ocean conditions, harvest and predators impact survival as the juveniles grow to adults.

As for ocean conditions, the “Blob” has had a huge impact on sea surface temperatures and food along the northern coastlines and “we’re still seeing what we are calling the ‘hangover’ effect.’” That began in 2013 to 2014 with a “ridiculously resilient” high pressure ridge, similar to what we had for shorter period this past December, Weitkamp said.

Generally, nutrient rich water is brought to the surface by storms and at some time there are heat transfers to the ocean’s depths and from the ocean to the atmosphere.

But poor ocean conditions began with warm, low nutrient waters and a “big mess of water that didn’t get cooled because we didn’t have many storms,” she said. 2016 brought one of the three strongest El Niño’s in recent history, but by Dec. 17 this year, there has been a change to La Niña conditions that began the week of Nov. 6 with cold water at the equator.

“If you look at forecasts, we’re getting back to more normal conditions, although there is still some warm water to the north,” Weitkamp said. “In 2018, the cooler coastal waters should be good for salmon entering the ocean.”

The bottom line is that there was a huge biological response to the warm water, she said, including the arrival in the north of tropical species beginning in 2015. Demoic acid closed crab and clam fisheries from California to Alaska. There were dramatic changes to the food web and young Chinook and coho salmon were very skinny.

In 2016, red pelagic crabs were found in Oregon (the previous northern limit for these crabs was Mendocino, California), anchovies invaded the Salish Sea and fishery closures due to demoic acid continued.

Swordfish were sited off Vancouver Island in 2017; cod declined in Alaska, resulting in a scaling back of the fishery in that state, and pyrosome populations (a warm water species) exploded and continue to wash up on beaches. Crab fishing was slow to open this year. The good news has been the high Pacific lamprey counts at Columbia River dams.

As for salmon and steelhead, in 2015 there was a low abundance of juvenile spring Chinook and coho. Fraser River and Salish Sea coho saw a similar decline in abundance.

“We know that when you have low abundance of juveniles, you will have low adult returns,” she said, pointing to a low run of coho in 2015. In fact, Columbia River and coastal coho returns were some of the lowest since the 1990s.

Alaska pink salmon had the lowest return in memory in 2016 and Fraser sockeye returns were the lowest on record, but chum returns to the Fraser River were the highest in 20 years. There were high chum returns, as well, in Washington and Oregon.

As conditions were improving in 2017, Alaska saw the highest chum harvest ever, along with high pink and sockeye returns, yet there were fishery closures for Chinook in British Columbia, Washington and Oregon. Steelhead returns to the Oregon coast were the lowest ever and the Klamath River Chinook fishery was closed.

“It seems like we’re doing a pretty good job of getting the juvenile fish to Bonneville Dam, but we’re losing them in the ocean,” said Idaho Council member Bill Booth. “And there’s also predation and fishing in Alaska” to consider.

When evaluating the smolt to adult returns to Bonneville, “we should consider all the hits to the fish — predation, harvest and other factors. We send out 250 million smolts into the ocean and only 2 million come back,” he continued. “I’d like to see NOAA take a more broad approach and consider harvest and predation.”

Looking at it from a slightly different angle, Weitkamp instead suggested considering changes in fresh water that could give juveniles a survival advantage in the ocean.

“Willamette River Chinook juveniles, for example, leave the river early and grow quickly in the estuary and ocean. The smaller you are, the more prone to predation. If you can get a wild fish to be 5 millimeters larger when they enter the ocean, how much would that count in their survival?” she asked.

In her summary, Weitkamp said that the warm ocean conditions present since 2014 continue across large parts of the North Pacific and we should expect the biological effects of a warm ocean to continue for several more years. However, on the positive side, the cooler coastal waters forecast for spring 2018 should be good for young salmon entering the ocean.

• The biological response to the warm water has been huge. Effects are observed at all levels of the marine ecosystem.

• We can expect biological effects of the warm ocean to continue for several years. There is big concern for 2018 coho and 2019 Chinook returns because of low 2017 juvenile abundance in the ocean. There are many more than usual hake and mackerel off Washington and Oregon, but uncertainty about whether they will stay. Lingering warm-water impacts on species including crab and groundfish are uncertain.

• Cooler coastal waters forecast for spring 2018 should be good for young salmon entering the ocean.