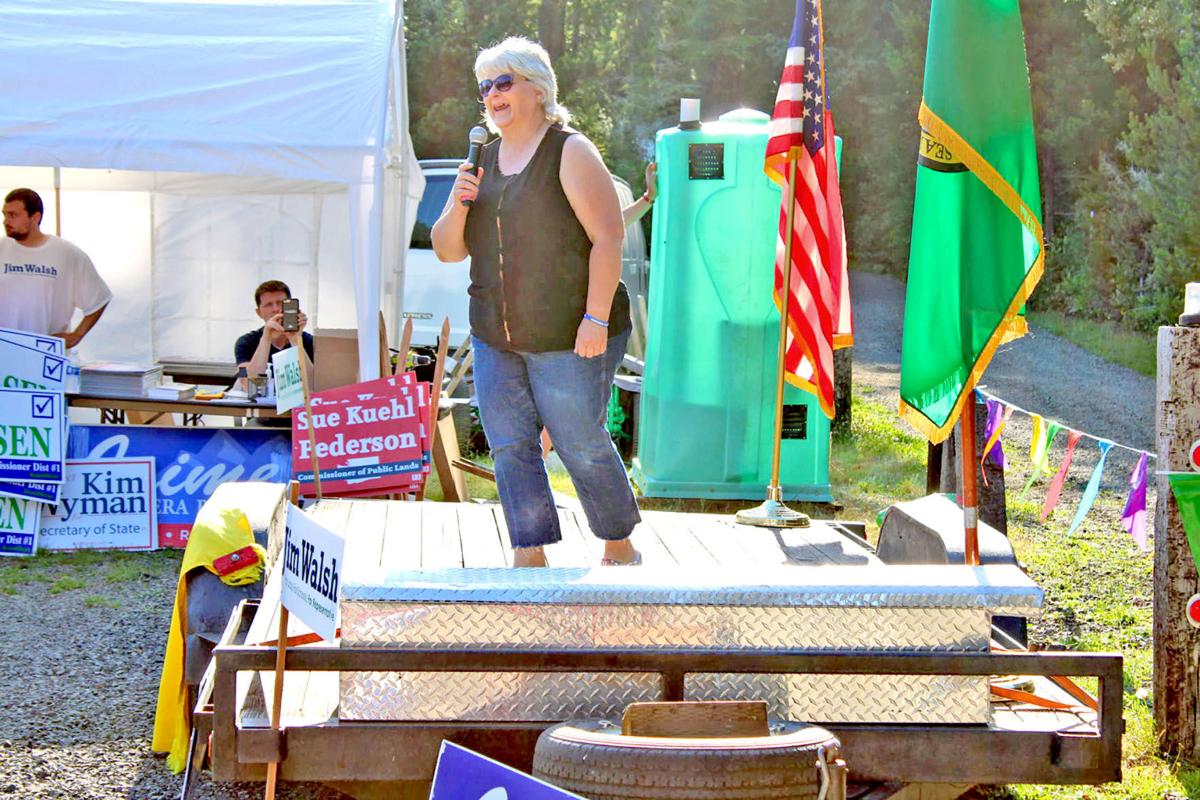 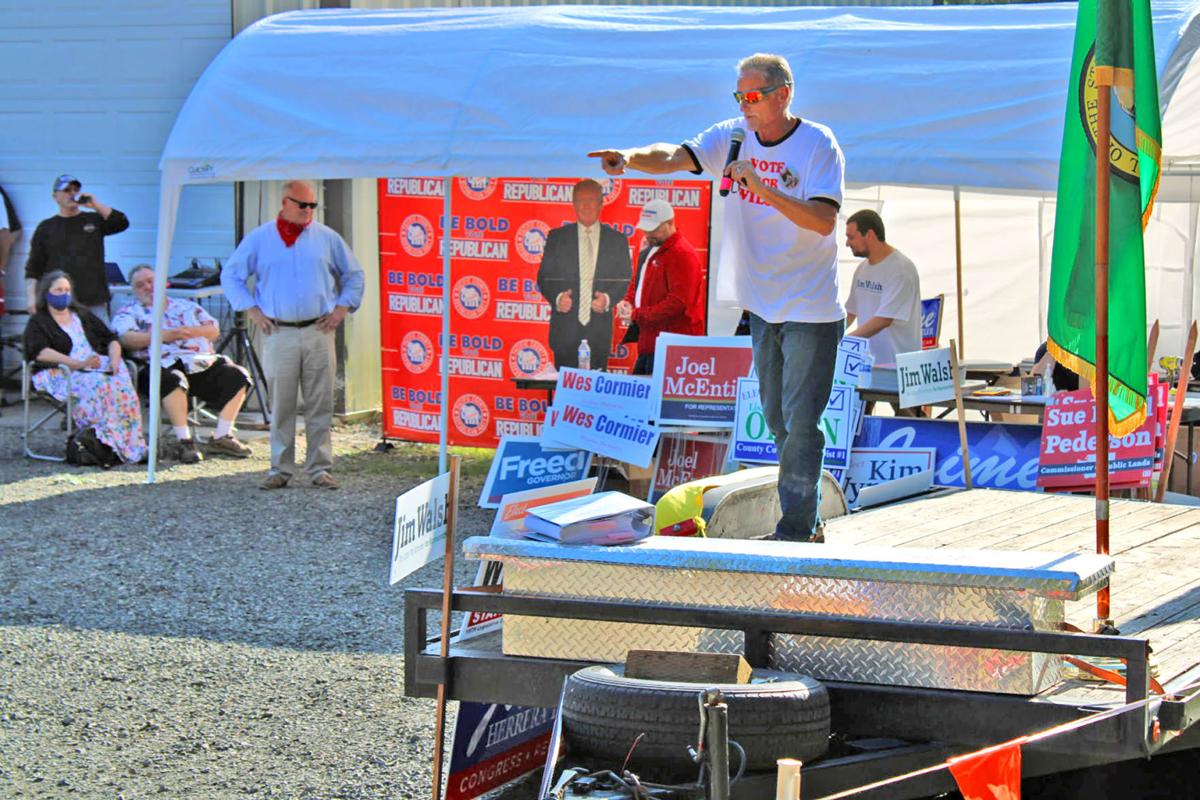 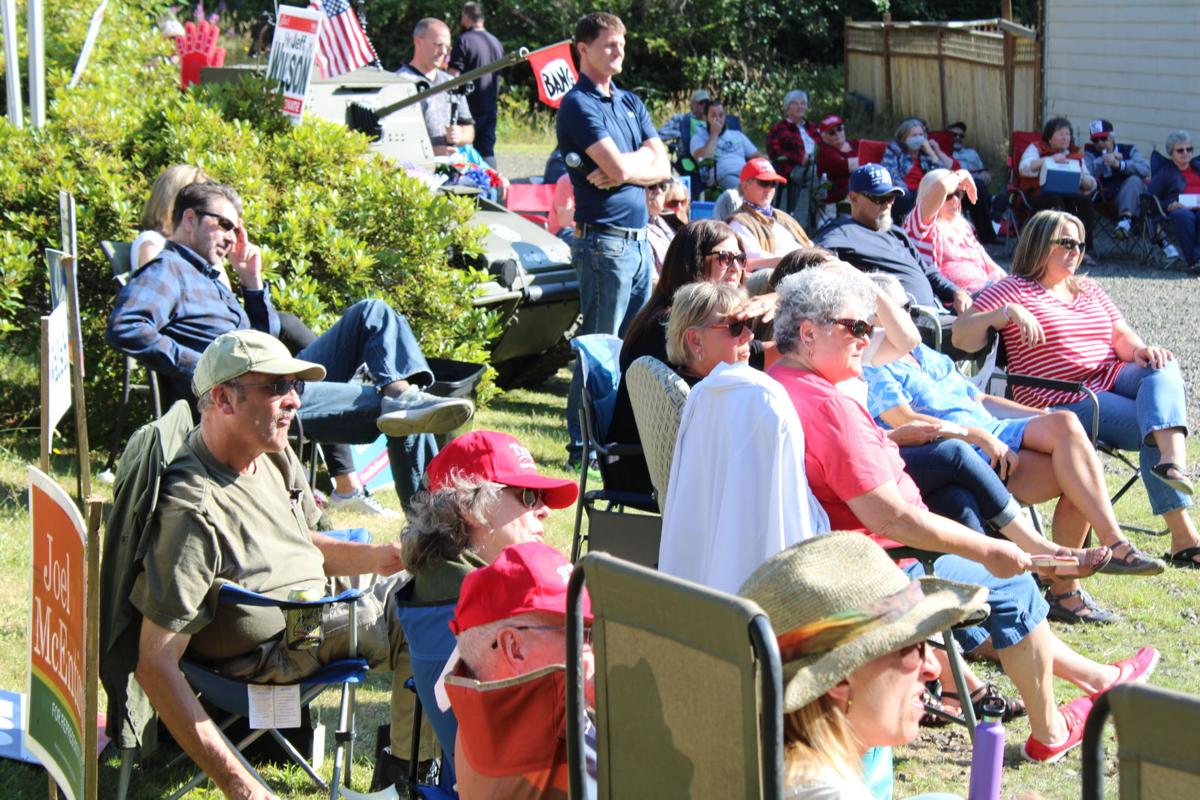 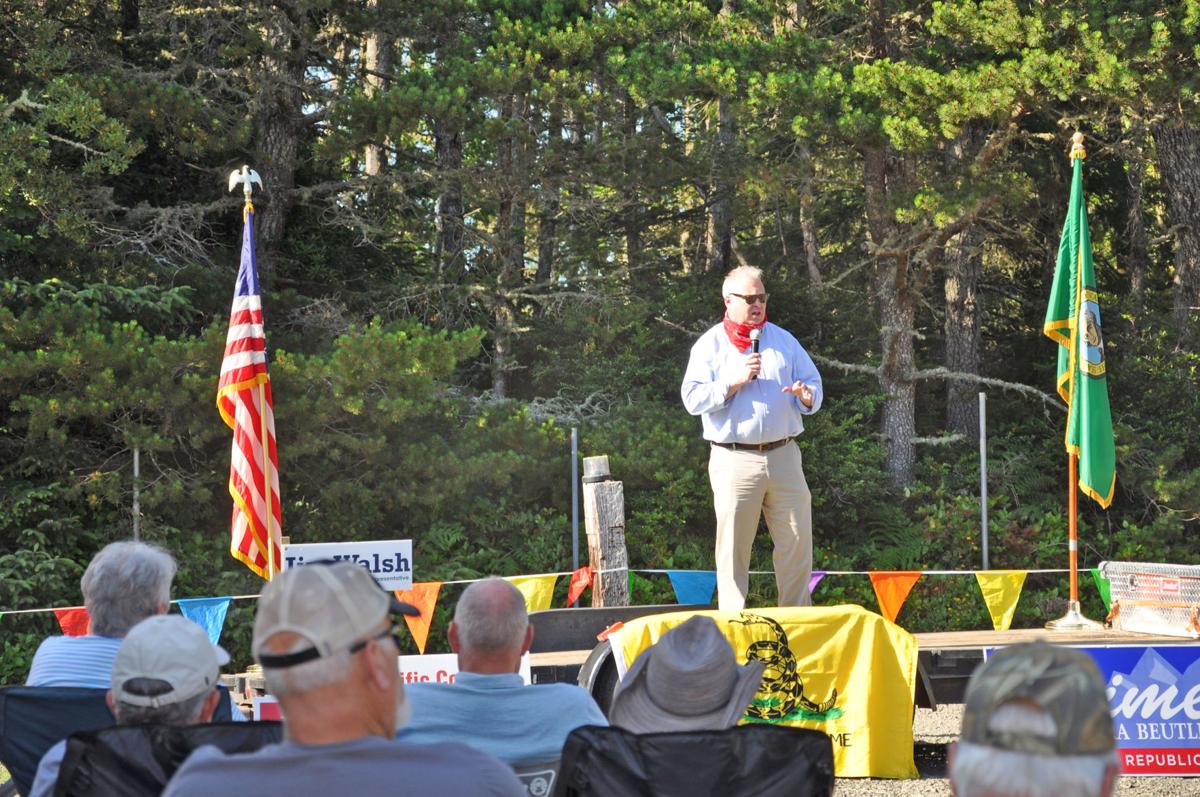 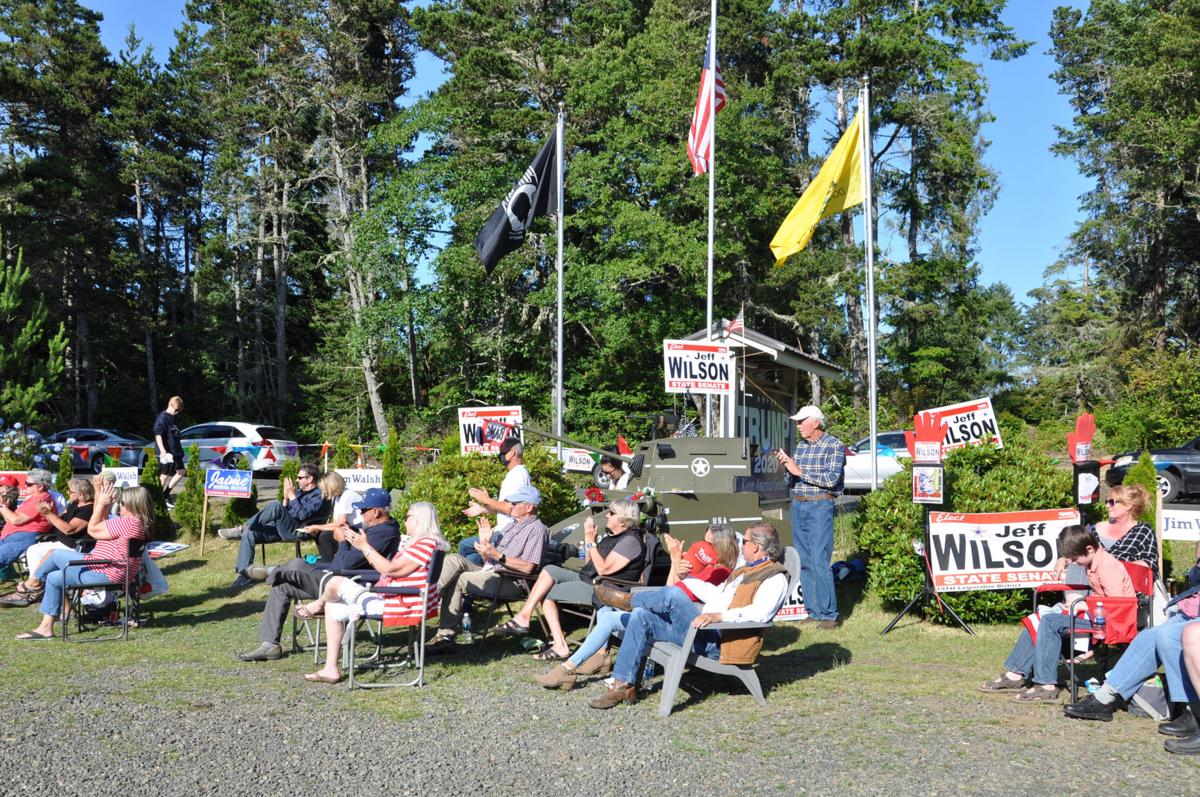 Few of those in attendance at an outdoor Republican campaign rally on the peninsula July 10 wore safety masks or practiced six-foot physical distancing. 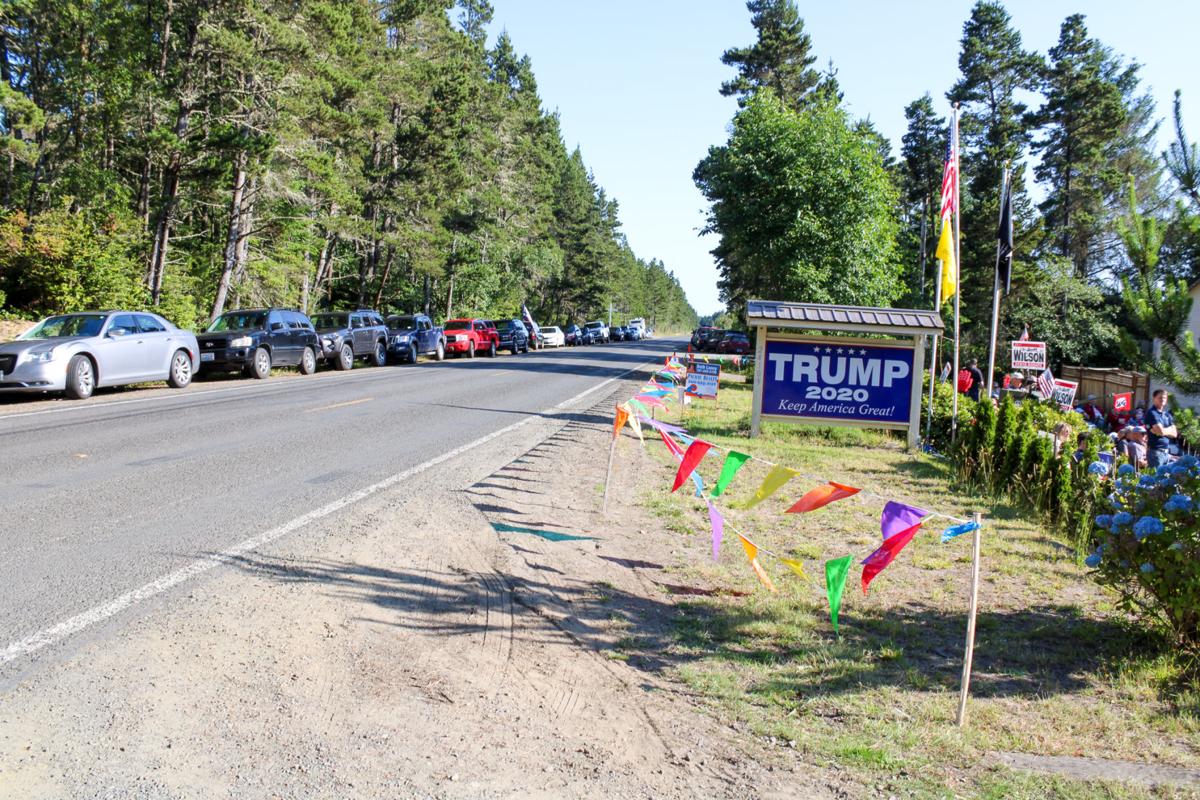 A Trump campaign sign marked the destination for attendees of a “MAGA Meetup” on the peninsula on July 10. 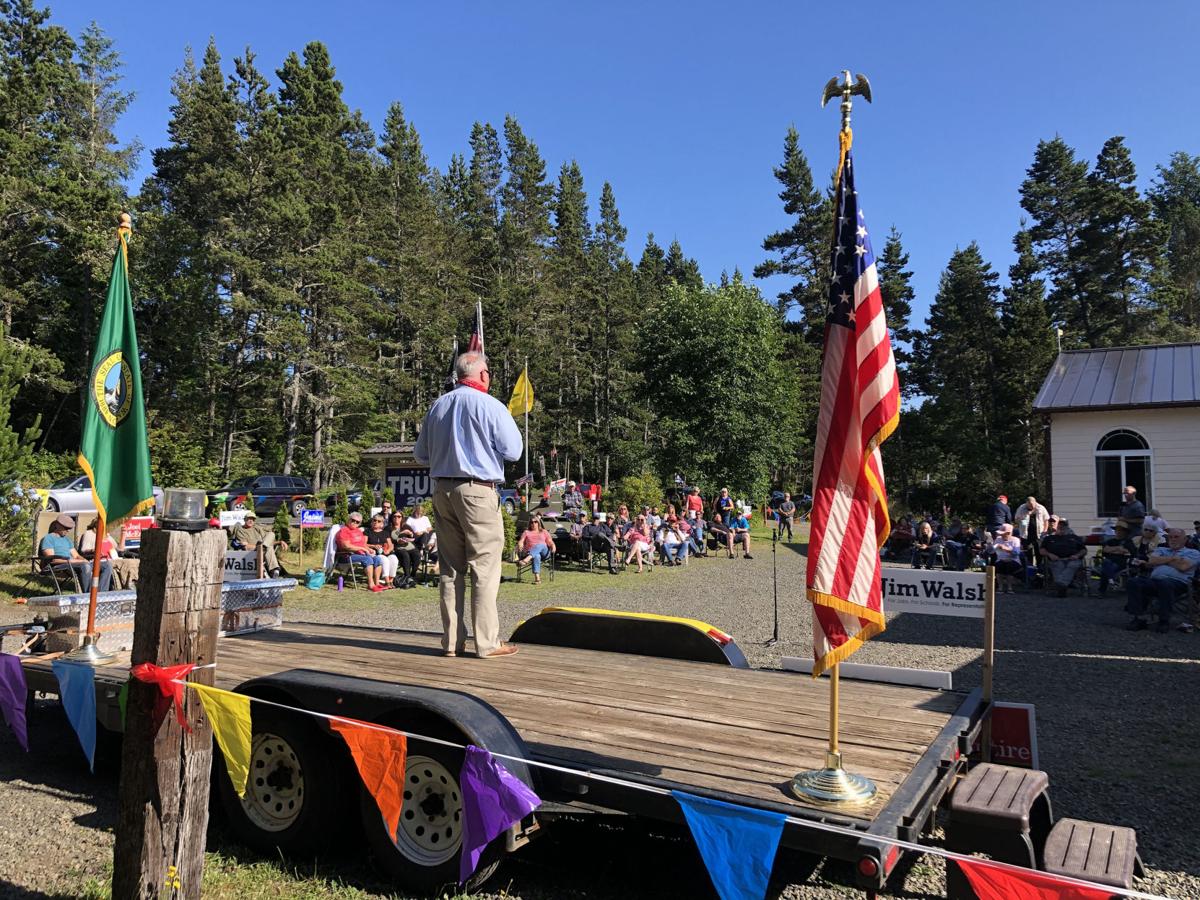 State Rep. Jim Walsh addresses an audiance in attendance to hear from Republican candidates for office. 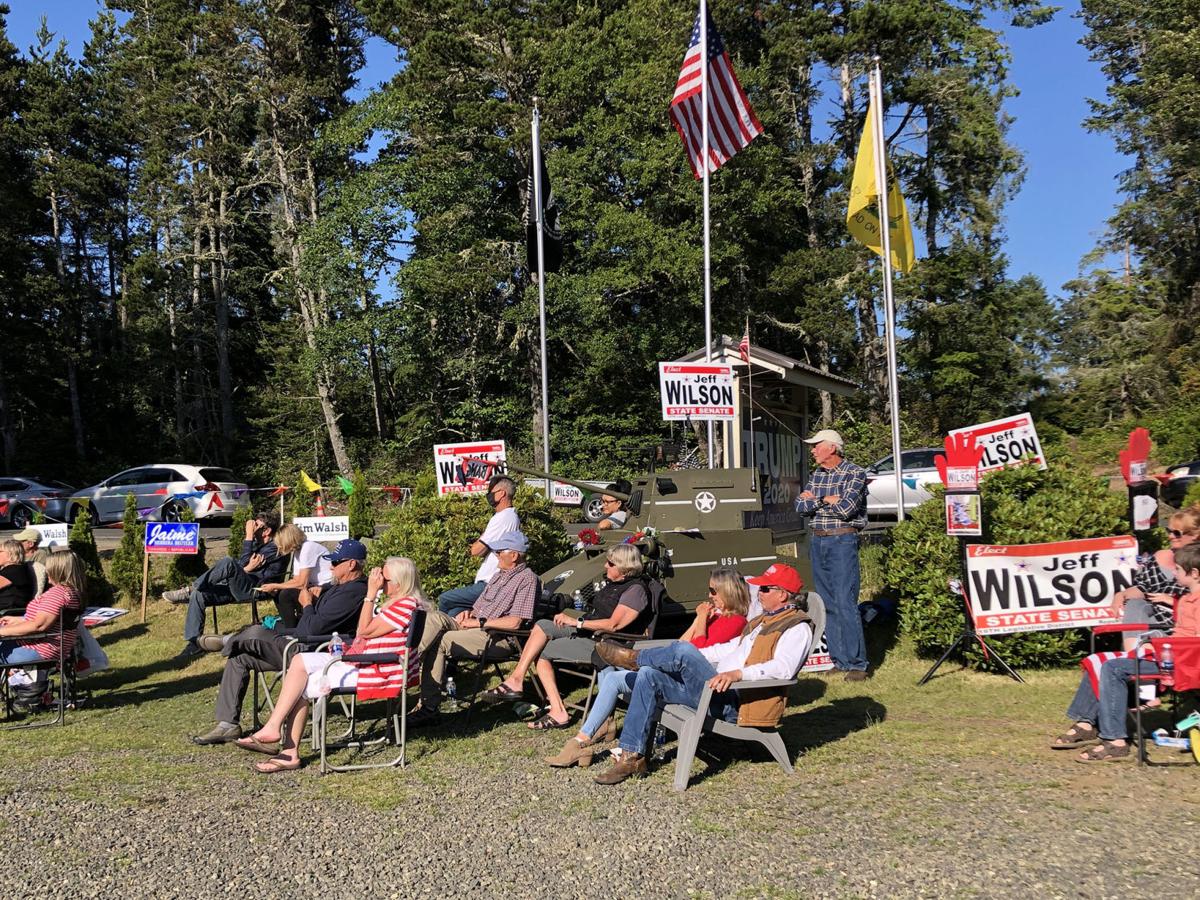 Attendees at a “MAGA Meetup” enjoyed a sunny evening of political talk. 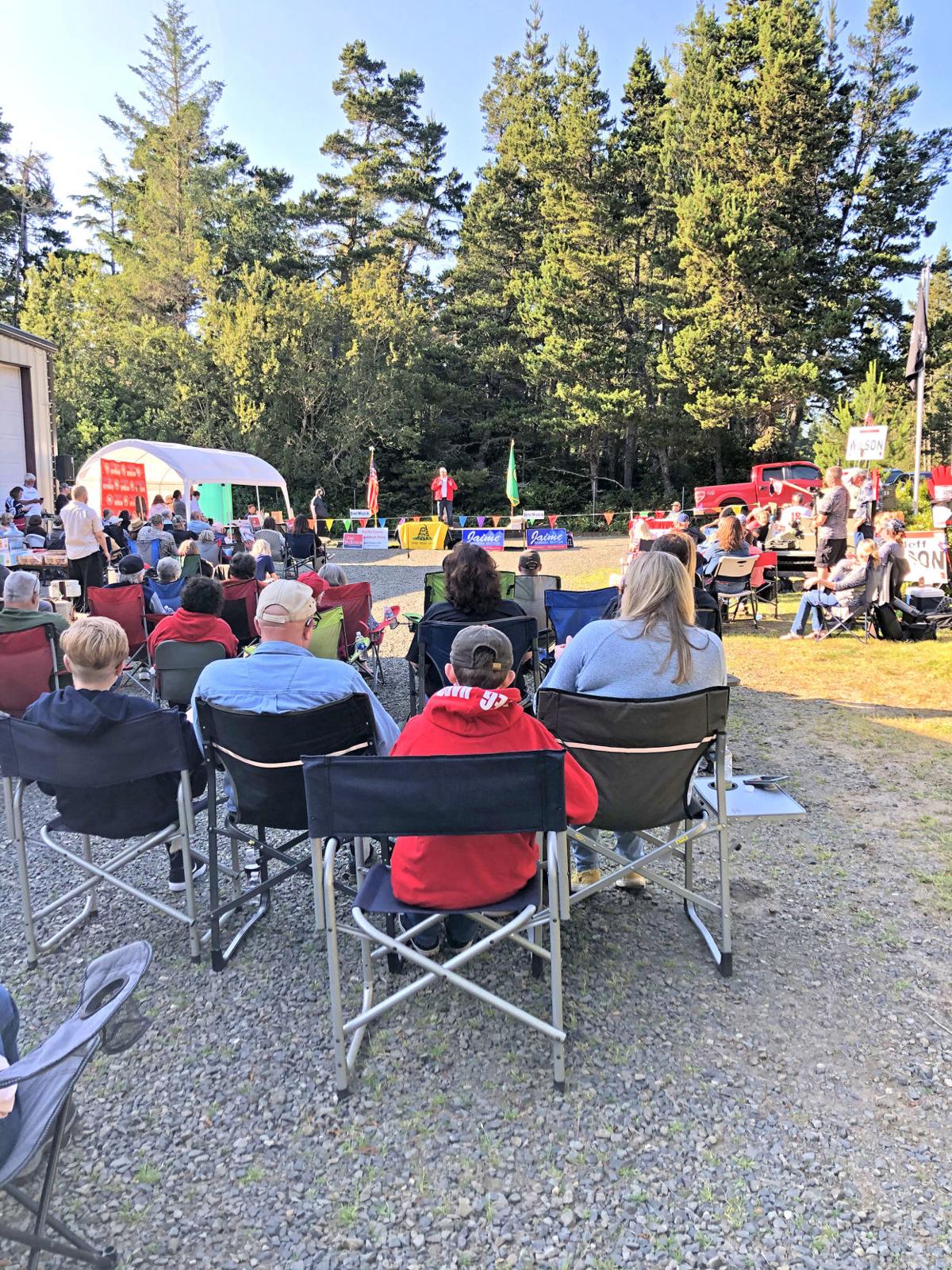 Attendees listen to presentations from Republican candidates at a July 10 gathering.

Few of those in attendance at an outdoor Republican campaign rally on the peninsula July 10 wore safety masks or practiced six-foot physical distancing.

A Trump campaign sign marked the destination for attendees of a “MAGA Meetup” on the peninsula on July 10.

State Rep. Jim Walsh addresses an audiance in attendance to hear from Republican candidates for office.

Attendees at a “MAGA Meetup” enjoyed a sunny evening of political talk.

Attendees listen to presentations from Republican candidates at a July 10 gathering.

OCEAN PARK — About 100 Pacific County Republicans and county and legislative candidates linked up for the first “MAGA Meetup” of the year at an Ocean Park residence on July 10, an affair where attendees largely shirked social distancing measures.

Four Republican candidates running in three 19th Legislative District races spoke and gave their pitch to attendees at the event, including State Rep. Jim Walsh, who acted as the moderator. Pacific County Commissioner Lisa Olsen also spoke, as well as supporters of several Republican gubernatorial candidates. Less than 10% of attendees appeared to be wearing a face mask or covering at the outdoor event.

The event was the first of what the Pacific County Republican Party hopes is three meetups it will host this summer, to allow voters to hear directly from Republican candidates running for local and statewide offices. Other meetups are tentatively scheduled for July 31 in Bay Center and Aug. 14 at a North County location to be determined.

At the meetup, Walsh gave attendees an update on the happenings of Republicans in the state Legislature and their response to the covid-19 pandemic. While Walsh said his side of the aisle initially supported Gov. Jay Inslee’s pandemic plan, they are now calling for a special legislative session to provide checks on Inslee and the state’s executive branch.

“[Republicans in the legislature] are really at the place in this whole process where a lot of us feel it’s time for the state to get back to work — completely back to work,” Walsh said.

Walsh also denounced proposed taxes floated by some Democrats in the legislature to address anticipated losses to the state budget. A state revenue forecast in June projected an $8.8 billion budget shortfall over the next three years. State Rep. and former House Speaker Frank Chopp, D-Seattle, released a $2 billion revenue proposal in June that would create a corporate payroll tax on high earners and a state capital gains tax.

Walsh also voiced his support for Referendum 90, a veto referendum on this year’s ballot that would overturn Senate Bill 5395, which requires comprehensive sexual health education be taught in public schools beginning in the 2021-22 school year, beginning in kindergarten. Walsh said he personally believes sexual education should begin to be taught in junior high school, but that these decisions should be made at the local levels, not the state level.

“The way it ought to be is if you folks want to have a more ambitious sex ed. program at your schools, you elect school board members to make that decision locally,” said Walsh. “My real problem with Senate Bill 5395 and the reason why I support the referendum, which will turn it around, is the referendum maintains local control of school districts and curriculum.”

McEntire pushes for state to reopen

For the second election in a row, Cathlamet Republican and educator Joel McEntire is running against State Rep. Brian Blake, D-Aberdeen, for the 19th District’s other seat in the state House.

McEntire said he’s knocked on hundreds of doors since launching his campaign, and said nobody cares if he’s wearing a mask or not when he’s standing on their doorstep. Completely reopening, even as new confirmed cases continue to rise in the state, McEntire argued, is a better fiscal solution to address budget shortfalls than raising or instituting new taxes.

“Why are we doing this? Why can’t I go back to work? People are on our side, they are hungry and looking for direction,” said McEntire. “And we stand here offering this direction to them. Let’s open back Washington state up for business. It is the only cure.”

McEntire argued Blake, who has represented the 19th District in the legislature since 2002, is a “career politician” who has grown complacent in his position. Blake beat McEntire with 54% of the vote in 2018, his narrowest margin of victory since 2010, when he won with 52.4% of the vote.

Both Republican candidates vying to take on State Sen. Dean Takko, D-Longview, also spoke at the meetup and mostly highlighted their records on fiscal issues and loosening regulations.

Grays Harbor County Commissioner Wes Cormier has served on the county commission since 2012 and touted his record eliminating regulations, such as enacting an 800-foot exemption for outbuildings and accessory buildings and allowing an expedited permit process for agricultural buildings. Cormier said he’s voted against raising property taxes every year he’s been on the commission, as well as against buying new buildings, budgets, contracts and “glorified wellness programs.”

“I have a history in Grays Harbor County, and I have a record to run on. And that’s the kind of state senator that I’ll be for you in the 19th District,” Cormier said.

Port of Longview Commissioner Jeff Wilson, who did wear a mask when interacting with attendees, also touted his record on fiscal issues while serving on the port commission, saying he’s cut taxes 53% in his time on the commission, as well as eliminating other fees and wasteful spending. He also slammed Takko for supporting Senate Bill 5395, the comprehensive sexual education bill.

“Since I’ve been elected, I’ve kind of been feared by the established, I would say, bureaucrats. I don’t come in peace for that; I come for business, I come to restore your voice — the same voice that was stolen from us,” Wilson said.

Since being elected in 2016, Pacific County Commissioner Lisa Olsen said she’s worked nonstop in her position, whether it be in county meetings, on the phone or in Olympia. Her platform, she said, has been focused on the county’s natural resources, which she says are under attack from the state.

“[Our natural resources] are being threatened, more than most of you know. The fisheries, the timber, the shellfish, they are just barely surviving because of Olympia and the broken, broken things that happen up there,” Olsen said.

Olsen told the crowd that it’s important to vote for the offices where they don’t recognize who the candidates are, such as the state Commissioner of Public Lands, where Democrat Hilary Franz is running for a second term. Olsen said the county has been “decimated” by policies coming from the state Department of Natural Resources and the state Department of Fish and Wildlife.

“This county has paid dearly for policies that we have absolutely no control over, unless you vote,” said Olsen. “And I’m going to say it, you’ve got to vote Red. You have got to get people [into elected offices.] There’s a groundswell out there, there’s a groundswell and I can feel it. And we’ve got to take our state back, because they’re going to kill us if we don’t.”

Olsen and her primary election opponent, Darrell Moudry, a South Bend Democrat, will both automatically advance to the November ballot under Washington’s top-two system.