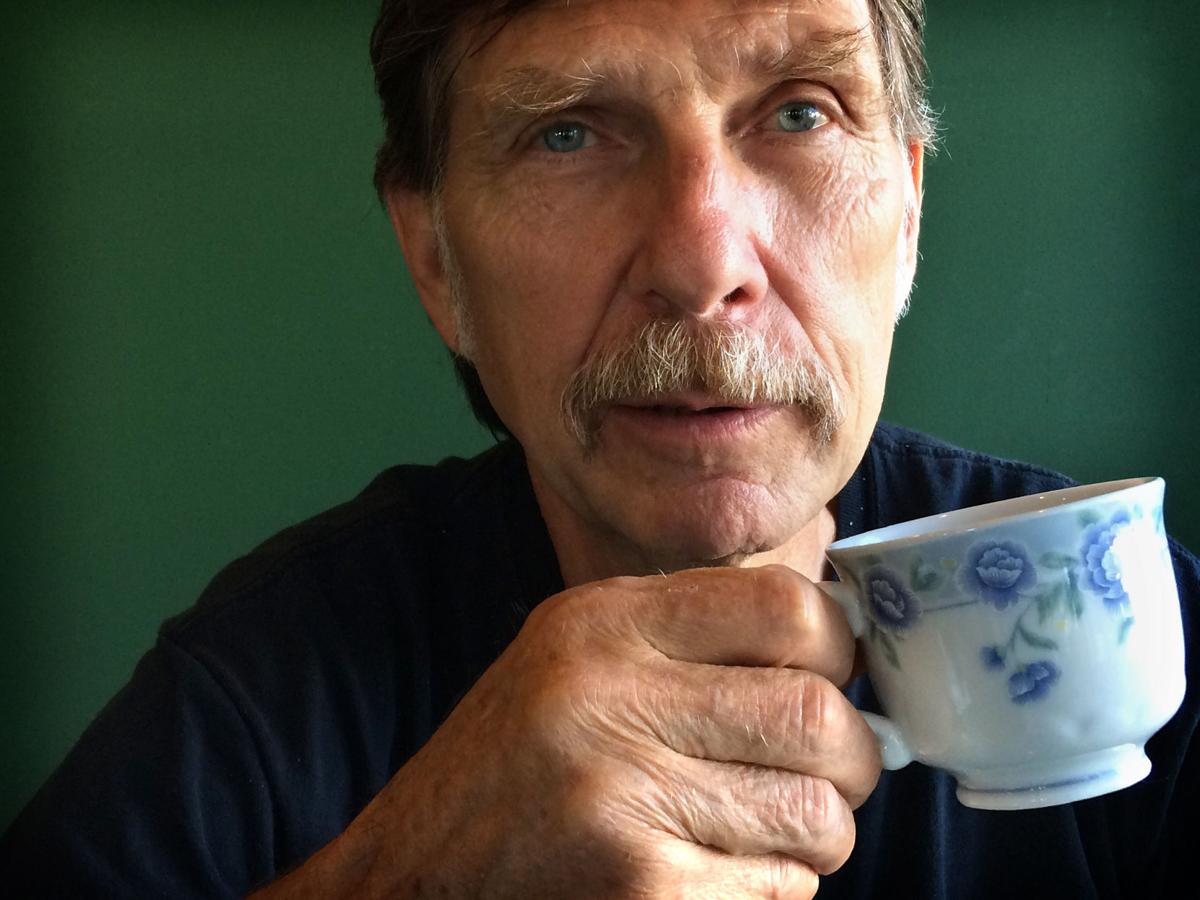 Desmond Doss Jr. of Ilwaco talks about growing up the son of a Medal of Honor recipient and the upcoming film by Mel Gibson based on his late father's life, faith and service at war. 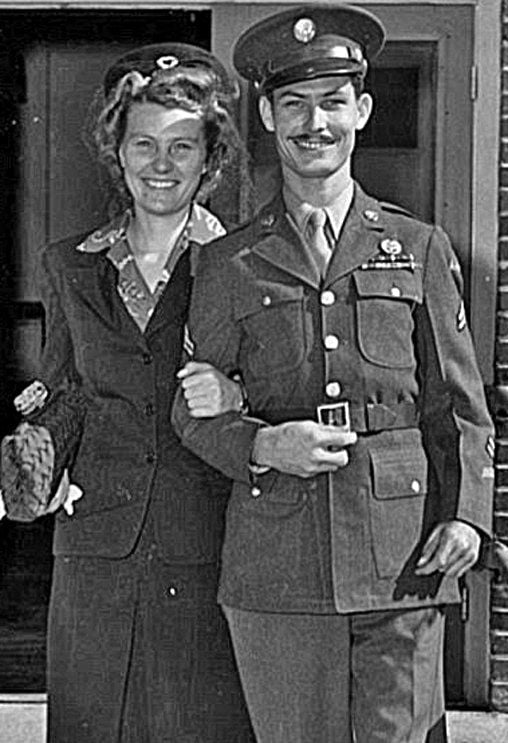 Desmond and Dorothy Doss were married in August 1942, just before he went into active duty.

Desmond Doss Jr. of Ilwaco talks about growing up the son of a Medal of Honor recipient and the upcoming film by Mel Gibson based on his late father's life, faith and service at war.

Desmond and Dorothy Doss were married in August 1942, just before he went into active duty.

ILWACO — Desmond Doss Jr. has led a very interesting life. He learned to drive on a tractor, but once talked a naval crew into letting him pilot a nuclear submarine — “It was like steering the Empire State Building.” Another time, he unwittingly drove off with the Dali Lama from an airport in Maui — “I’m shooting the breeze with this guy, and I don’t know a Dali Lama from a regular llama.” Then there was that unforgettable day when his calm presence at the scene of a car accident likely saved the life of a severely-injured woman — “She thought an angel had spoken to her, and so she hung on,” Doss said.

Now, Mel Gibson has directed “Hacksaw Ridge,” a film about his late father, Desmond T. Doss, a devoutly religious conscientious objector who won the Congressional Medal of Honor without ever picking up a firearm in World War II.

The film is set to be released in early November. Based on early screenings, critics are nearly unanimous in praising it, with a 93 percent “Fresh” rating on rottentomatoes.com. For example, writing in the movie industry magazine Variety, Owen Gleiberman said, “It immerses you in the violent madness of war — and, at the same time, it roots its drama in the impeccable valor of a man who, by his own grace, refuses to have anything to do with war.” The UK’s Observer newspaper called the film an “overwhelming masterpiece.” The film received a 10-minute standing ovation at the Venice Film Festival.

Desmond Doss Jr. is a resident of Ilwaco and a local firefighter with Ilwaco Volunteer Fire Department and Pacific County Fire District No. 1. He sailed into Ilwaco harbor in 2000 on his way to Costa Rica, and has been here ever since. He spoke with the Observer in early September.

What’s this like, to have a Hollywood film being made about your father?

“It’s long, long overdue. I’m no stranger to his being known, especially to the church. But his story is so much bigger than the church. I think it addresses a lot of what people are struggling with today — What do they believe? What do they think? Do they have principles? Do they operate from a point of love and compassion, or is it anger and hate and all kinds of other things?”

Your father was a strict Seventh Day Adventist. Are you religious like he was?

“He believed what he believed. Of course, he would have liked me to believe that. I don’t, and didn’t, and still don’t. That doesn’t mean I don’t admire the great teachers, Jesus being one of them, and the principles they stood for. To me, it’s the principles, not the hierarchy of a church that’s going to change my life.”

Do you feel you had a really hard thing to live up to, with your dad’s story?

“See, here’s the thing, I can’t be my dad. I just can’t. I can’t do what he did. I can’t do that. From the time I was a little kid, people were asking me — Do you want to grow up to be like your dad? Well, the short answer is ‘yes.’ The long answer is ‘no,’ I want to find out who I am, and be whoever I am. It’s taken a while to figure that out, if you must know. But it keeps showing itself more and more.”

How did your dad interpret and deal with the notoriety and attention that being a Medal of Honor award winner brought him?

“You have to understand that he was very devoted to his idea of his God. He said that whatever he did was made possible only through that God, and if there was to be glory, it should go to God, not him. But I figure he must have recognized that his accomplishments were somehow unusual. I mean, we all know that. I think he must have sensed that somehow, even though he didn’t make any noise about it.”

“I think my dad was very ordinary. He was just my dad. That’s how I knew him. He was just my papa, you know? We got up in the morning. We ate breakfast. We went out. We did chores. We got tired. We got hungry. We got cold. We did normal stuff. He was a regular human being.”

“Now, did he perform in ways that are incredibly uncommon? Yeah, he did. No doubt about that. It’s even hard to explain how it ever even could have happened that way. But underneath it all, he’s just like you and me. But once again, he operated from principles — his idea of who he thought he ought to be — and he was consistent with that.”

“From pretty early on he had this idea that he shouldn’t go around killing people. He’s not the only one that had that idea. But he’s probably the only one that I know of that demonstrated, no matter what, that he believed that.”

Do you think that came solely from his religion, or do you think it was something else about his upbringing? Because a lot of people have religion, and a lot of those same people join the military, and take up arms, even though the commandment says — ‘Thou shallt not kill.’

“It was just intrinsic to him. It was just who he is. It wasn’t theoretical. And I hope that all people, especially young people, when they see this, pick up on that. That’s what this story shows is — someone that had love for his brothers, even when they didn’t much like him. The power of that is incredible. It’s the same power that distinguished the great teachers. The ability to not waver from love and compassion, acceptance and forgiveness.”

“And I don’t know if anyone can actually pinpoint what it is. But it is powerful, and it’s been demonstrated by many people. My dad’s not the only person that’s ever demonstrated this power and transmuted it into a practical equivalent — taken it out of the conceptual and theoretical, and put it into everyday boots on the ground, hands on the wheel, stuff. It’s easy to be philosophical. It’s quite another to actually demonstrate the theory.”

And what do you think your dad would have thought of all this attention to his story now, with the state of the world as it is?

“He wasn’t a person to step back and fawn about his thoughts. He just knew what he knew and was not a particularly philosophical person. My mother was the extreme opposite of that. She was well-educated and incredibly smart. She’s the most underrated person in this whole thing. So much of what has happened to my dad would not have happened had it not been for her.”

That must have been incredibly hard on you and your dad when your mom passed away in a traffic accident. But did that kind of stick with him?

“I don’t really know all of his thoughts on that. I probably could have known, but I was so angry myself. There was a gap in our communications there for a while. There came a point in time where I had to get past all of that. Last time I saw my dad I was down there at his place in Alabama. He was blind and deaf. He knew I was there but I couldn’t have a conversation with him. He used to write stuff and pass notes, but he couldn’t do that anymore. But I needed him to know that whatever had been, had been, and as far as I was concerned it was behind us. So I just crawled in bed with him. And I hugged him and he hugged me for about 20 minutes or whatever. When I got up, I knew I loved my dad again.