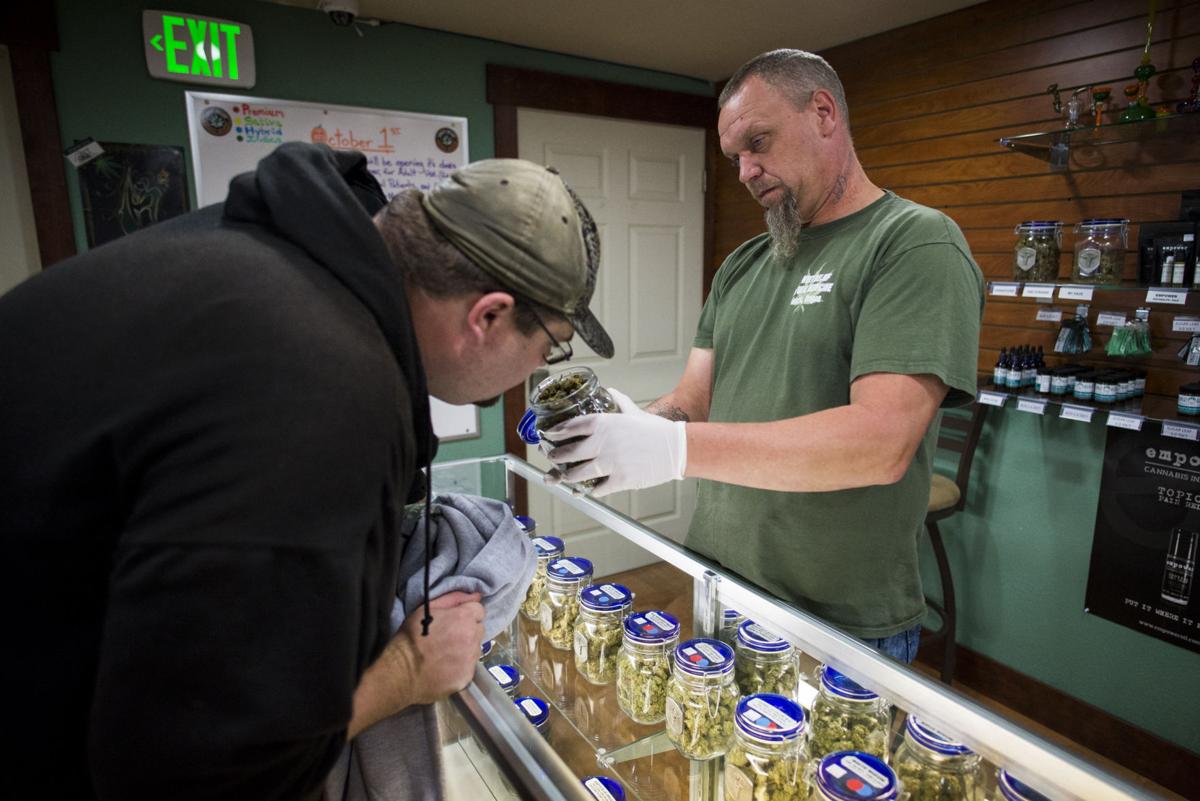 Christopher Williams, left, smells a strain of pot held by Gary Reynolds, right, at Sweet Relief Natural Medicine just after midnight Oct. 1. Williams was the first customer in line to buy recreational pot at the shop. Starting Oct. 1, recreational marijuana could be sold to adults 21 and older. 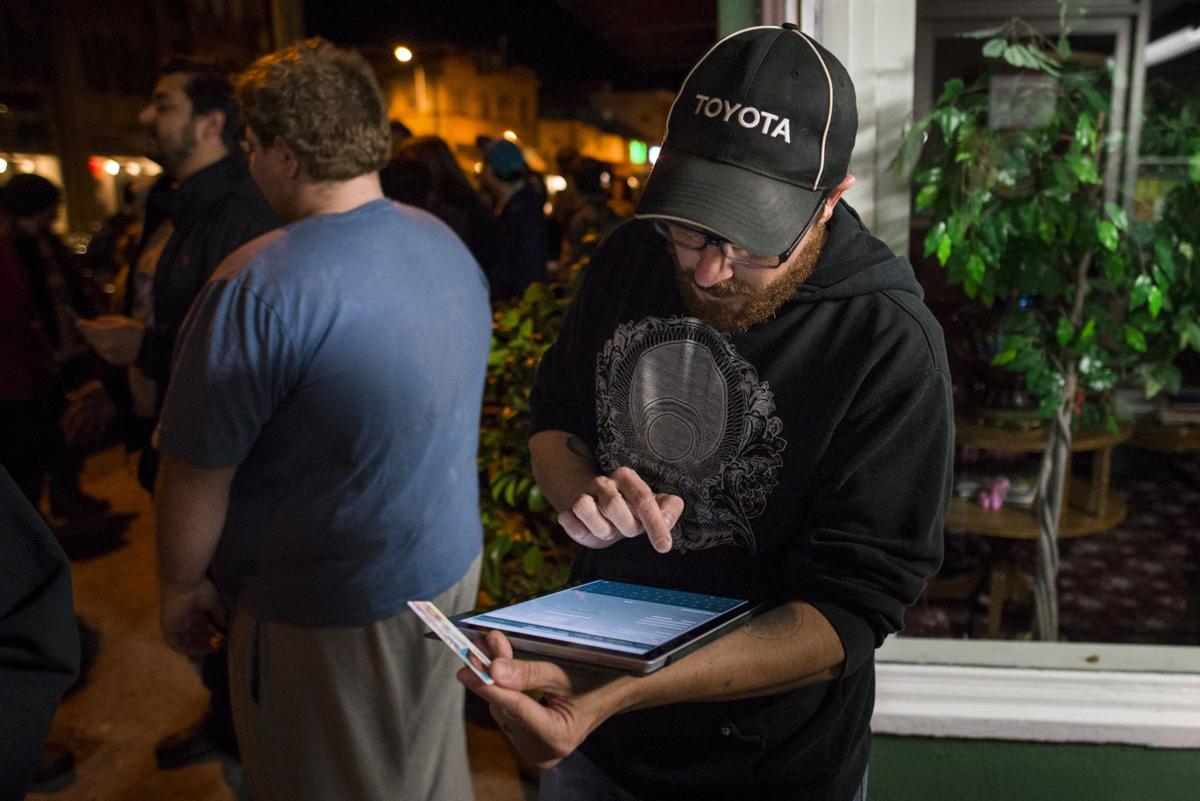 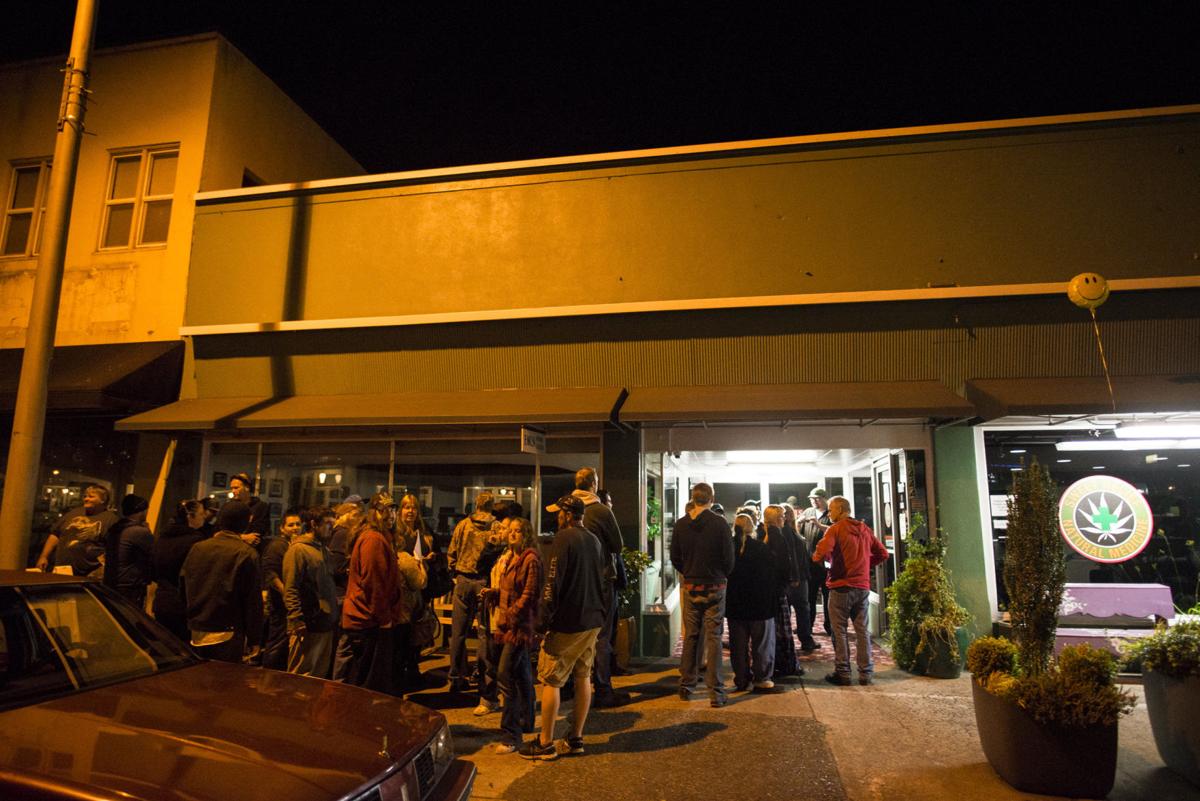 A line forms outside of Sweet Relief Natural Medicine before the midnight opening Oct. 1. 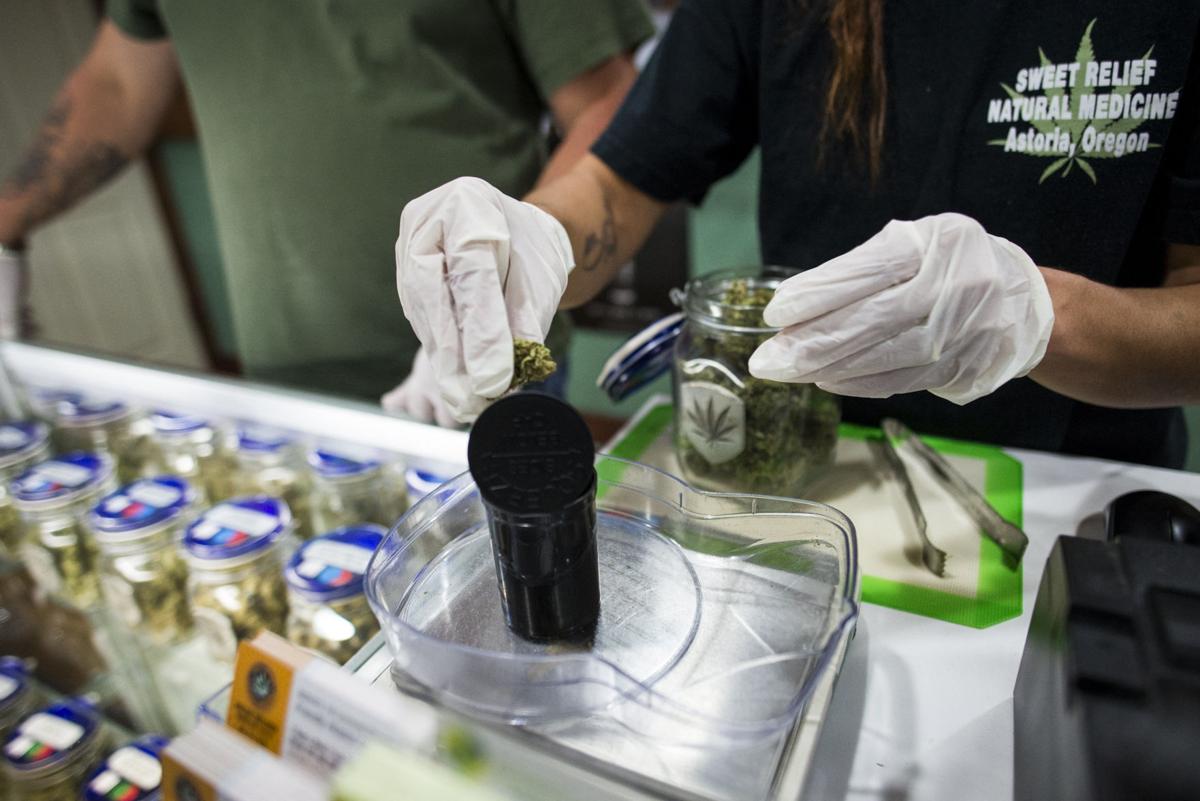 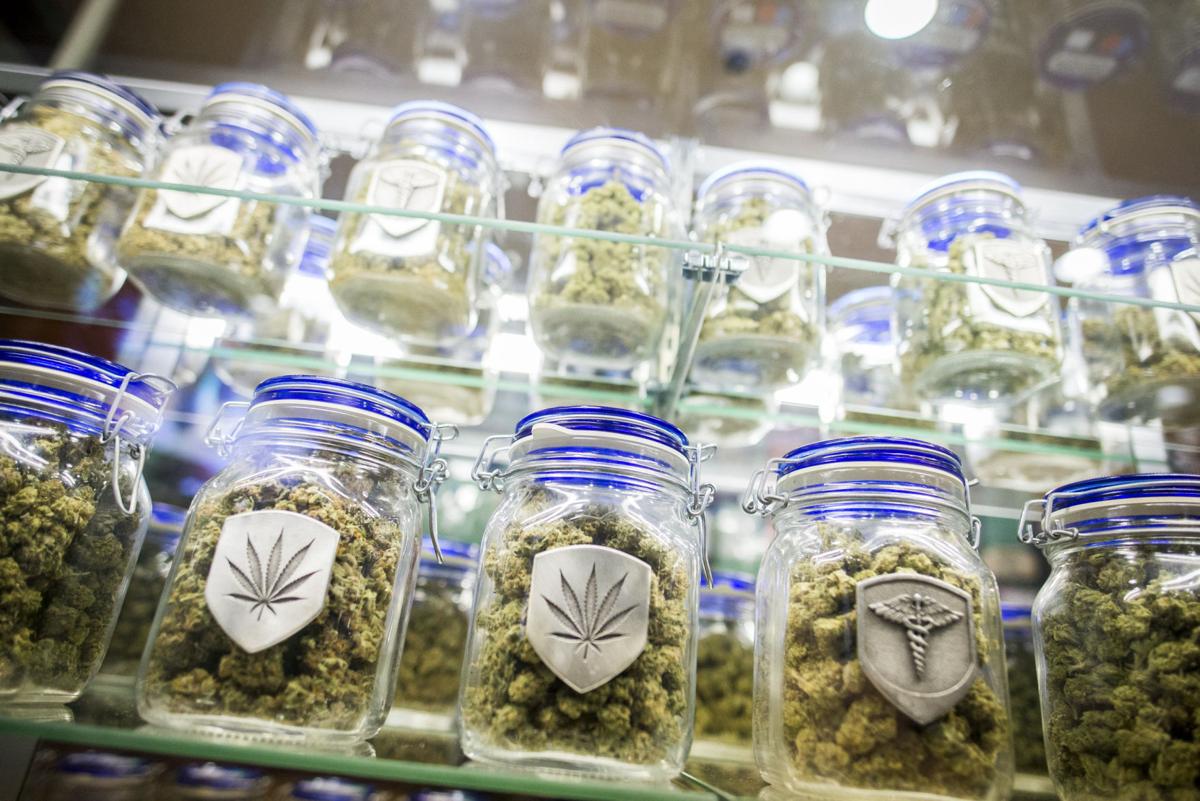 In most circumstances, marijuana possession and sale have gone from being crimes to a regulated commercial activity in Washington state. Many of those previously convicted of marijuana-related offenses can now apply to the governor for a pardon.

Christopher Williams, left, smells a strain of pot held by Gary Reynolds, right, at Sweet Relief Natural Medicine just after midnight Oct. 1. Williams was the first customer in line to buy recreational pot at the shop. Starting Oct. 1, recreational marijuana could be sold to adults 21 and older.

A line forms outside of Sweet Relief Natural Medicine before the midnight opening Oct. 1.

In most circumstances, marijuana possession and sale have gone from being crimes to a regulated commercial activity in Washington state. Many of those previously convicted of marijuana-related offenses can now apply to the governor for a pardon.

CLATSOP COUNTY — Without stress or secrecy, Tom and Charlotte Gniazdowski entered The Farmacy, a medical marijuana dispensary in Astoria on Oct. 1 and purchased four strains of pot. Because they wanted to. Because they could.

And because they legally could buy pot purely for recreational use in Oregon.

“I never thought this day would dawn,” said Charlotte Gniazdowski, who lives just outside Astoria with her husband.

The Gniazdowskis, who have smoked pot since the 1960s, felt they were witnessing and sharing in one of their state’s historic moments: Under state law, Oregon’s medical marijuana dispensaries may now sell up to a quarter ounce of dried marijuana leaves and flowers to adults 21 and older who don’t possess medical marijuana cards.

Now in their 70s, the Gniazdowskis won’t miss the days when they had to worry about getting caught with the drug or, worse, accidentally getting their friends in trouble for selling it to them.

“I’m really glad this has finally happened,” she said. “I hate being treated like a criminal for just smoking pot.”

The Farmacy, one of three registered dispensaries in Astoria, opened at midnight, and “it was a stampede for about an hour and a half,” said Omar Guerrero, who owns the business with Nick Palazzo. When they reopened at 9 a.m., they faced “another stampede,” Palazzo said.

The Gniazdowskis strolled in during an afternoon lull and left with small amounts of Maui Wowie, Buddha Tahoe, Raspberry Kush and Blue Dynamite.

Tom Gniazdowski, an occasional user, said “it’s fun to get a little bit high and go out for a walk, or whatever, in the woods.” And, after hitting the Maui Wowie that afternoon, the couple hit the hiking trails near Lewis & Clark National Historical Park.

“Some people cannot believe that this has happened, especially the old people,” Guerrero said. “They’re so happy just to have this option.”

Meanwhile, at Sweet Relief Natural Medicine on Commercial Street, customers poured into the downtown location, smelling the robust, earthy aroma before they had even crossed the threshold.

When the dispensary opened at midnight, roughly 65 people had already lined up outside, and, except from 3 a.m. to 6 a.m., the store stayed slammed with patrons until it closed at 7:30 p.m.

“It’s been far beyond my expectations,” said co-owner Oscar Nelson as he checked customers’ IDs and savored the contained excitement on their faces. “I’ve seen a lot of 50-year-old people turn into young kids in front of my eyes.”

Many of the people in the waiting room — mingling, relaxing on the furniture, grabbing packets of M&Ms from a glass bowl — said smoking marijuana helped them deal with various ailments: chronic pain, insomnia, post-traumatic stress disorder, etc. Some said they had not obtained a medical marijuana card because the application process and wait period took too long and they couldn’t afford to purchase one.

Josh Binder, an Astoria resident, came from the East Coast, where marijuana use is illegal and, he said, stigmatized. “There’s really kind of a cavalier attitude here, but it’s kind of evolved into a positive attitude,” he said.

A pot user since high school, Binder stood near the front of the late-night line and bought a popular, highly concentrated strain called Sticky Bitch. After a night of sweet dreams, he returned for a pre-rolled joint.

“I never smoked pot legally before, so it was kind of a milestone,” he said. “Just wanted to get it and smoke it and feel confident that I didn’t break the law.”

It was a similar story at Nature’s Choice Alternative Medicine in Astoria, and at Highway 420 and Cannabis Nation in Seaside: long lines, giddy grown-ups and the feeling of buyers and sellers that the world had finally caught up to them.

“It was a long time coming,” Nick Clark, owner of Nature’s Choice, said.

At each dispensary, more than 90 percent of customers turned up to get recreational marijuana. In fact, Clark had warned his medical patients that the place would be packed that day; several patients even chose to stock up on medicine ahead of the recreational rush, he said.

“We were very busy, we’re tired, we’re gonna get some sleep, and we’re going to do it again tomorrow,” said Gary Reynolds, co-owner of Sweet Relief.

As in Washington and Colorado, the initial demand for legal recreational marijuana is expected to taper off, but will likely stay well above the demand for medical marijuana, Nelson said.

Washington state legalized marijuana in 2012. It remains illegal to transport pot from one state to the other, but there has been little official interest expressed for enforcing this restriction. Until January, interstate marijuana shoppers who choose to violate the law will realize a significant tax difference, but will have fewer marijuana products to choose between than in Washington. Washington marijuana stores offer edibles and a variety of other product formulations.

Clatsop County District Attorney Josh Marquis, who opposed Measure 91 — which legalized the use of recreational marijuana — noted that the voter-approved measure called for taxing and regulating marijuana.

“The argument was: let’s tax and regulate marijuana and take it out of the black market,” he said.

But when the Oregon Legislature passed Senate Bill 460 in July, which allowed medical marijuana dispensaries to temporarily sell recreational marijuana, lawmakers basically allowed for the untaxed and unregulated sale of the drug, he said.

To be sure, dispensaries will start collecting a 25 percent tax on all limited recreational marijuana product sales beginning Jan. 4. And, eventually, the Oregon Liquor Control Commission will have the tools and the staff to regulate recreational and retail sale of marijuana, but “they don’t have either yet,” Marquis said.

“The Oregon Legislature were the ones who decided we simply couldn’t wait,” he said.

Marquis said it will take one to two years to know the effects of legalized recreational marijuana in Oregon, and that it would be presumptuous for him to speculate on what those effects will be.

“In fairness to the businesses, I suspect the ones in business now are going to try and carefully adhere to the law,” he said, “because nothing would cause them to get shut down by the state faster than obvious abuses,” like selling recreational pot to minors or giving out illegal amounts.

“I’m just glad that the will of the people finally overcame the small minds in government,” Steve Geiger, owner of Highway 420, said.