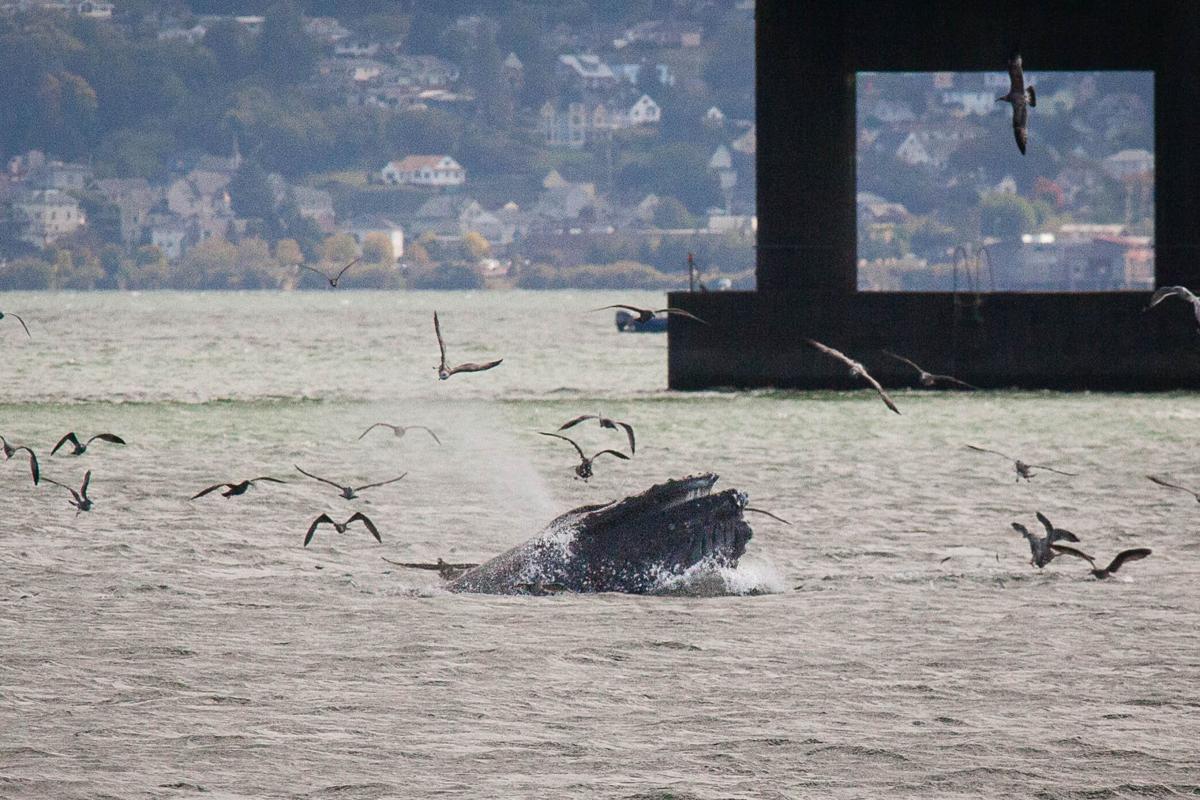 A humback whale burst out of the water on Saturday afternoon, frightening a cluster of birds who were diving for abundant bait-fish. 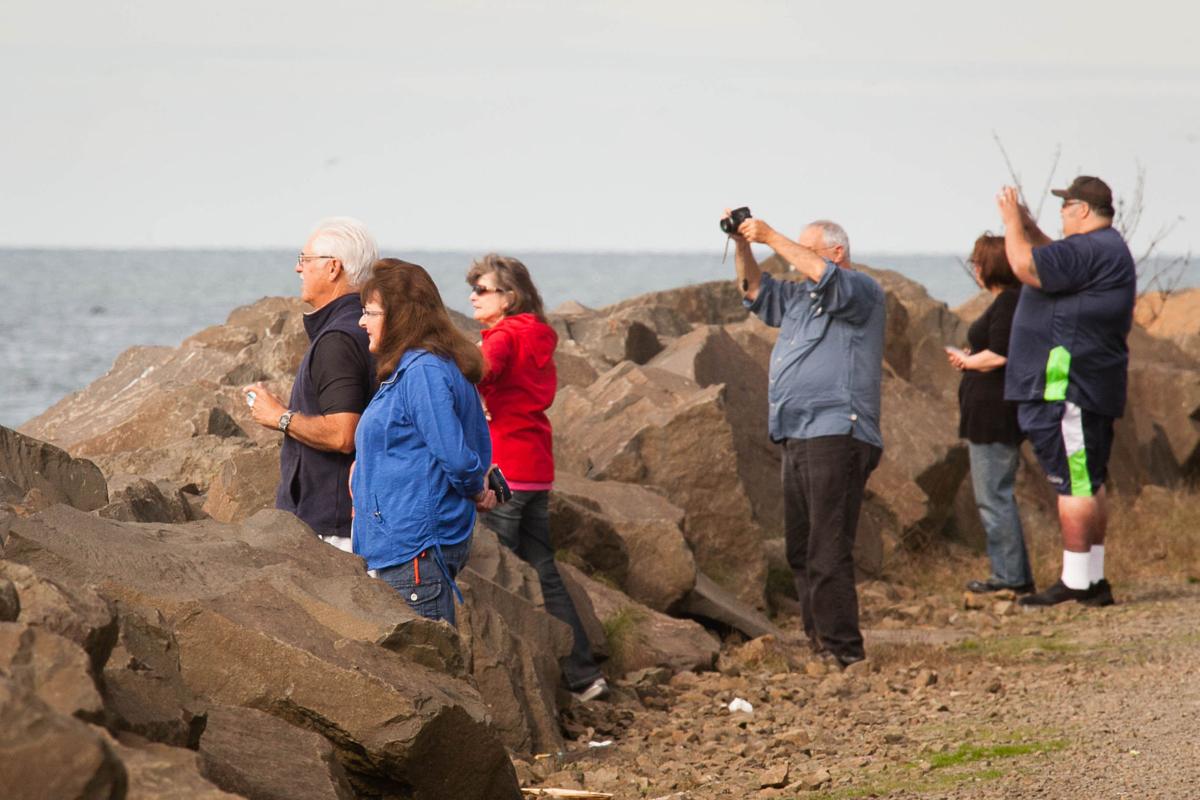 Whale-watchers gathered at pullouts along the bank of the Columbia River last week. Some drove long distances to watch the humpbacks, but locals were fascinated too. ‘I've lived here 26 years and this is the first time I've seen a whale,' one woman said. 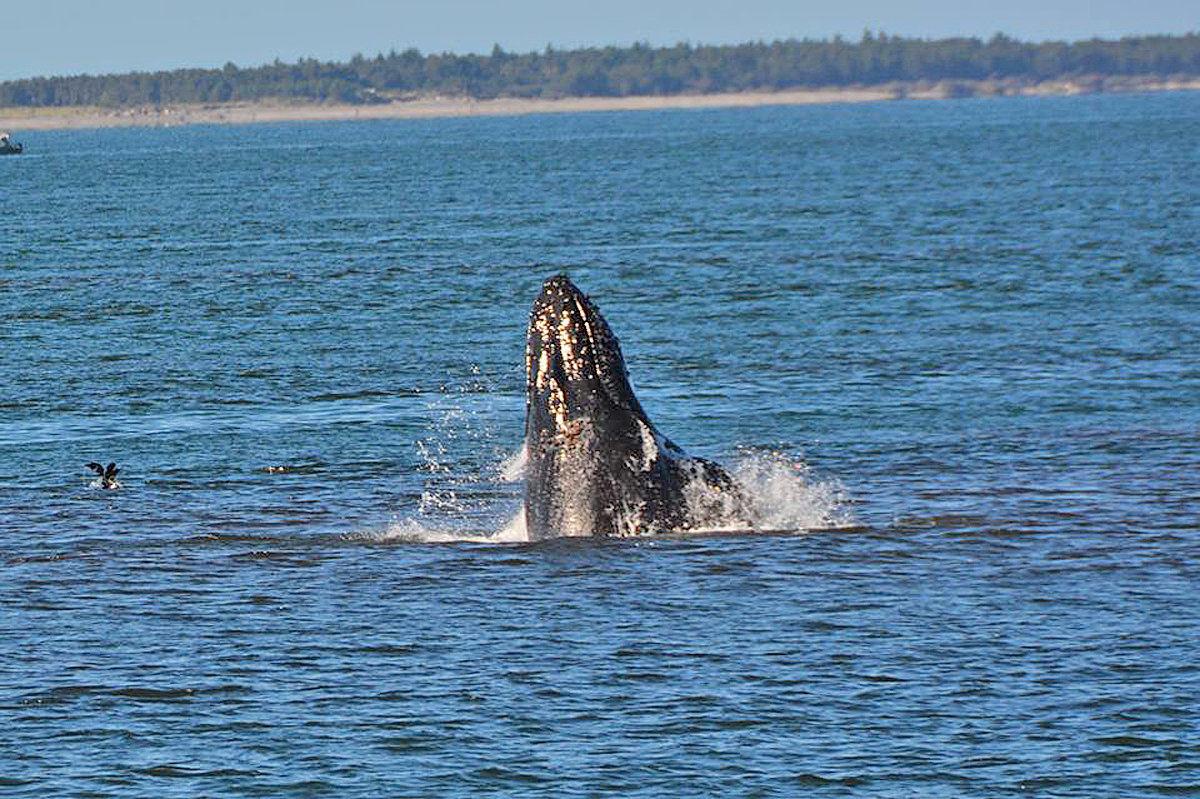 HARVEY CHATFIELD/HALF BLIND PHOTOGRAPHY This whale breached in the waters of the Columbia River just off McGowan Church east of the Chinook tunnel on Sept. 22. Photographer Harvey Chatfield was among the first to observe the humpbacks close to shore.

A humback whale burst out of the water on Saturday afternoon, frightening a cluster of birds who were diving for abundant bait-fish.

Whale-watchers gathered at pullouts along the bank of the Columbia River last week. Some drove long distances to watch the humpbacks, but locals were fascinated too. ‘I've lived here 26 years and this is the first time I've seen a whale,' one woman said.

HARVEY CHATFIELD/HALF BLIND PHOTOGRAPHY This whale breached in the waters of the Columbia River just off McGowan Church east of the Chinook tunnel on Sept. 22. Photographer Harvey Chatfield was among the first to observe the humpbacks close to shore.

COLUMBIA RIVER — The Columbia River is the largest river in the Pacific Northwest region of the U.S., flowing for 1,200 miles from the foot of the Canadian Rockies until it hits the Pacific Ocean near Ilwaco — but it’s still no place to hide a whale.

A German couple, on a tour of National Parks, was just leaving the Long Beach Peninsula last Wednesday. They’d tried to go whale watching on the Oregon coast earlier in their travels, but with no success. The woman was gazing idly out the car window as they started across the Astoria-Megler Bridge when the first humpback breached.

They turned the car around and pulled over outside of Chinook to stand and watch the whale for more than a half an hour. As it leaped again, she wondered, What are the odds?

Pretty good, as it turns out.

All last week and into this week, many people have been seeing humpbacks in the Columbia River. Photos of the Columbia humpbacks have appeared far and wide — in the Washington Post in the nation’s capital, for example.

The whales moved from the river’s mouth to right up against the bridge, feeding on schools of small fish. Though both gray and humpback whales follow traditional migratory paths up and down the West Coast and at least one humpback was spotted among fishing boats in late August this year, whales in general and humpbacks in particular are rare visitors inside the estuary. Until this summer, locals cannot remember ever seeing a humpback whale in the river itself.

These humpbacks timed their visit well. Unlike the solitary humpback that appeared in August, they arrived right after the busiest time for recreational fishing on the river, meaning the Coast Guard and the Washington Department of Fish and Wildlife enforcement officers say they haven’t had to worry too much about boater safety or people harassing the whales. It also helped that the commercial and recreational Dungeness fisheries were closed due to high levels of domoic acid.

Normally at this time, said Mike Cenci, deputy chief with WDFW police enforcement, some commercial crab gear would be stowed close to shore, the long lines necessary to drop the gear at greater depths snaking out across the water. Whales of all shapes and sizes can run afoul of such gear; last May, a commercial crabbing vessel helped rescue a young humpback tangled in another fisherman’s crabbing gear in Grays Harbor.

“I think we dodged an entanglement bullet by not having the presence of gear where it typically is,” Cenci said.

All last week, cars pulled over to the side of the rock-lined Highway 101, stopping just short of the Astoria Megler Bridge to gape at the humpbacks. People stood along the shore or hopped on top of rocks, shading their eyes and watching the distant spouts unfurl like smoke over the water. The humpbacks, recognizable by their grooved throats and the small dorsal fin low on their backs, were impossible to miss. They leaped out of the water. They twirled in place, showing off their long pectoral fins. They’ve been photographed with their enormous heads popping vertically out of the water, a maneuver called “spy hopping.” They’ve been eating, but they’re also taking a look around at a place some of them may have never visited before.

Now that they know what’s here marine biologists say they could return.

Out in the ocean, all is not well. Warm, unproductive water has persisted off the West Coast for more than a year, and this year a big El Nino rolled in. There has been a distinct lack of regular upwelling, a wind-driven phenomenon that essentially churns up the oceanic soup, bringing cold, nutrient-rich water to the surface. The result: The whole marine food chain is subdued and there is less for whales — as well as fish like salmon and tuna — to eat.

Blue whales, in particular, seem to be suffering. Their entire diet consists of a small crustacean called krill and recently these whales, the largest animals on the planet, have shown up looking emaciated, according to Mate. He and other marine scientists expect whales to go hungry during El Nino years, but that’s why whales carry so much blubber. These fat reserves see them through the tough times. Or, at least, that’s how it’s worked in the past.

This year, some humpbacks searching for food decided to check out the Columbia River.

If you have ever been on a family road trip, there is that moment near the end when everyone is hungry, tired, cranky and losing their minds. You foolishly refused to stop for lunch earlier and now you’re in the middle of nowhere and out of options. So you stop at a weird roadside restaurant. The only one for miles. Who knows what you’re going to get. But, turns out, the tables are clean, the owner is maybe the nicest person alive and the burgers are fantastic. On the next trip, the kids will beg you to stop there. It becomes a tradition.

This is, more or less what could happen with the humpbacks.

For weeks now, it’s been possible to tell when runs of bait fish are passing through the area just by looking for the birds. As fish run up and down the river, thousands of seabirds — cormorants, pelicans, terns and those various types of birds that will always be referred to, indiscriminately, as “sea gulls” — have followed, hovering like clouds of gnats over the surface of the river. Then they drop from the air suddenly, cutting through the water beaks first, wings tucked in close, fishing. The whales have simply joined the party.

“These animals learn their basic patterns of foraging from their mothers,” Mate explained. “When they wean that’s basically what they know. … They inherit her foraging area and then they add to those things from their own experience.”

Now the Columbia River and its fish are part of these whales’ experience.

And, Mate added, “They will tend to remember where they did well when circumstances were bad elsewhere.”