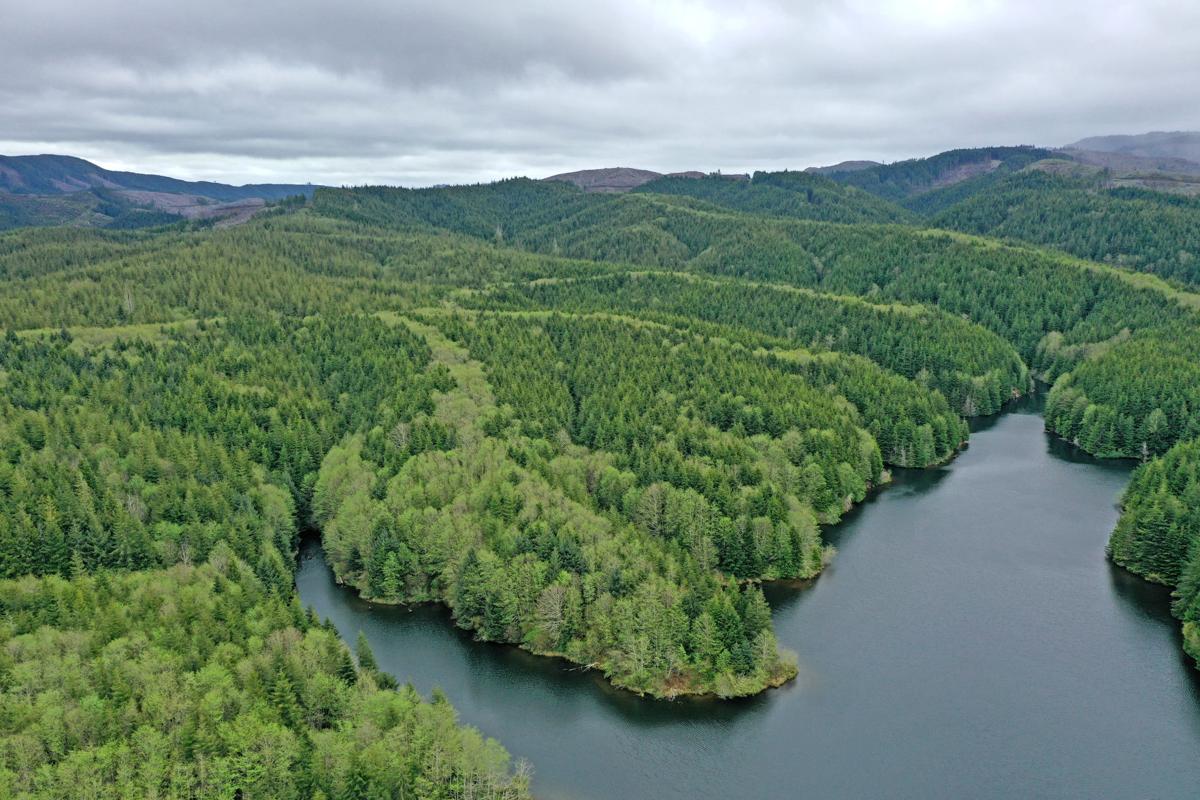 Ilwaco’s Indian Creek reservoir fills a small scenic valley on the flank of the Willapa Hills north of Chinook. The city is looking to acquire timber in the reservoir’s watershed. 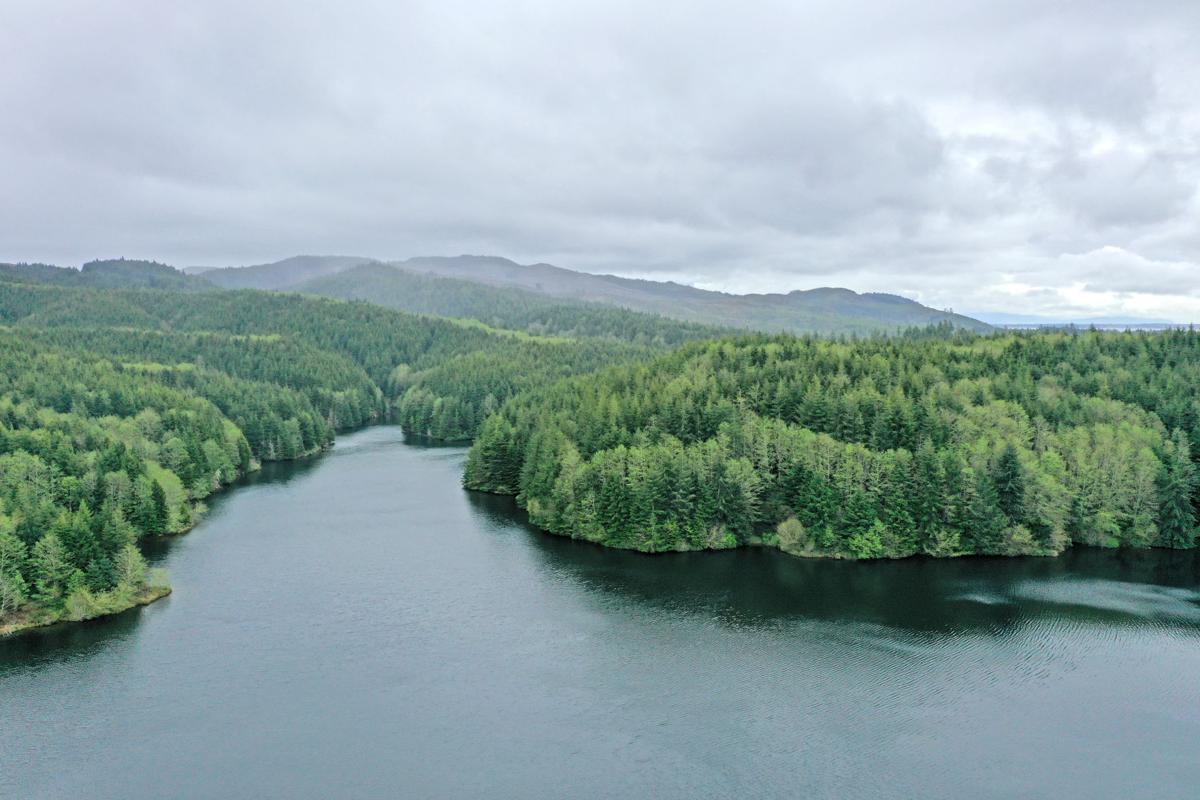 Ilwaco’s Indian Creek reservoir, which supplies the town’s water, is surrounded by forestland. Ilwaco wants to buy adjacent timber to protect water quality and preserve high-quality land for a variety of other functions. 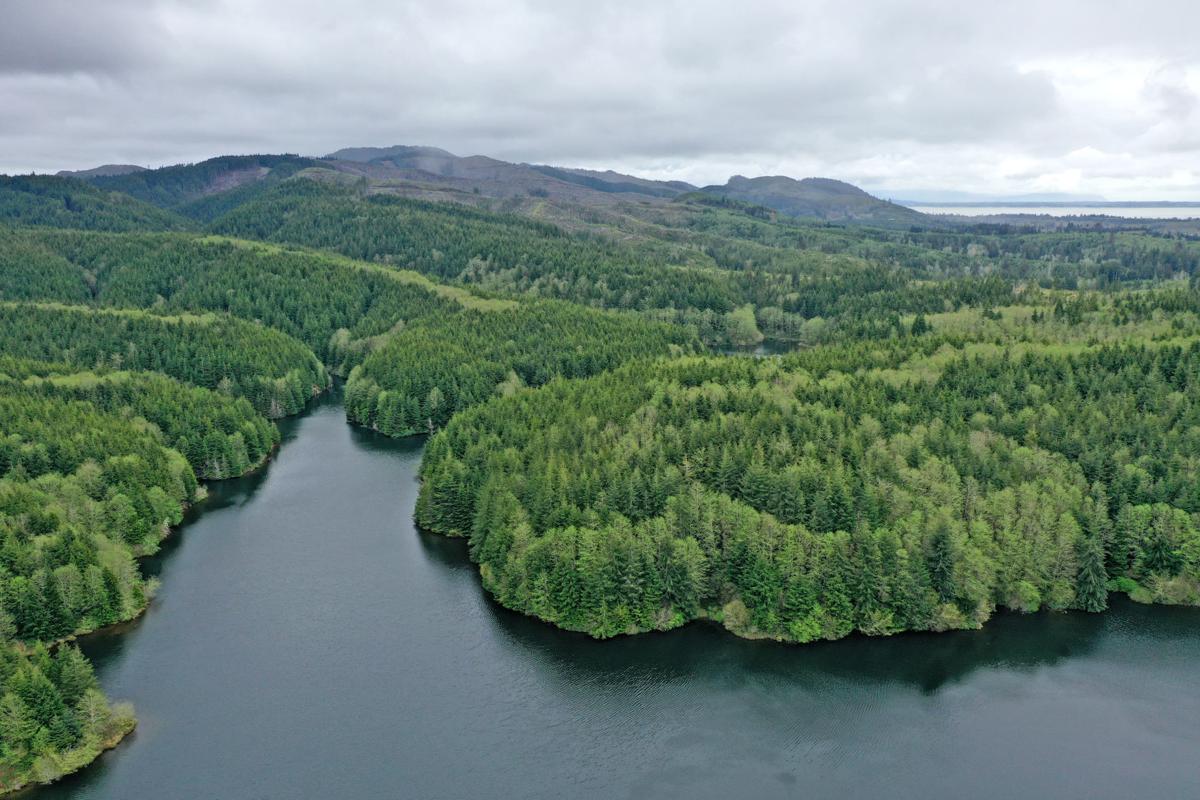 A drone photo shows part of Ilwaco’s Indian Creek reservoir, along with recently harvested timberland and the Columbia River estuary in the background.

Ilwaco’s Indian Creek reservoir fills a small scenic valley on the flank of the Willapa Hills north of Chinook. The city is looking to acquire timber in the reservoir’s watershed.

Ilwaco’s Indian Creek reservoir, which supplies the town’s water, is surrounded by forestland. Ilwaco wants to buy adjacent timber to protect water quality and preserve high-quality land for a variety of other functions.

A drone photo shows part of Ilwaco’s Indian Creek reservoir, along with recently harvested timberland and the Columbia River estuary in the background.

ILWACO — City officials and other project investors met for a three-hour workshop on Feb. 28, as the city of Ilwaco works toward protecting its water source — and the environment — for years to come.

The workshop centered around discussing the city’s funding strategies for purchasing as much as 387 acres of land and timber, most of which would be preserved as the Bear Ridge Community Forest.

In the city’s forest stewardship plan, which was approved by the city council in January, the city said two primary drinking water concerns exist: two timber deeds totaling 178 acres owned by Weyerhaeuser Company, and a lack of control over management decisions on about another 210 acres of watershed area outside of Ilwaco city management.

The acquisition of the timber deeds and the forest land would allow for the city of Ilwaco to completely own and manage a community forest that surrounds the city’s drinking water source, which is collected from Indian Creek. The timber in question is in the center of the drinking watershed, on steep slopes adjacent to primary creeks. The two timber deeds expire in 2028, and the city hopes to acquire the deeds before they are harvested.

The forest stewardship plan lays out a number of benefits that would come with owning and managing the land. Those benefits, the plan said, include a financial return that will decrease the cost of water filtration over time, a decrease in sediment and temperature in source water, the ability to develop local opportunities for recreation in the forest, a reliable tourism attraction, providing a local venue for education about sustainable forestry and creating strong community involvement.

Plotkin outlined The Trust for Public Land’s role in the funding process, explaining that the organization is best known for its land conservation efforts and consider themselves experts in both real estate and public funding. Essentially, Plotkin said, The Trust for Public Land will negotiate the sale of the property with Weyerhaeuser, work with Ilwaco to develop a financing strategy to purchase the property, and then sell the property to Ilwaco.

Webster attended the workshop on behalf of the Northwest Community Forests Coalition, which focuses on supporting the emergence, development and management of community forests in the Pacific Northwest. The coalition works in partnership with projects it supports by helping them figure out how to access funding support at both the state and federal level.

As a consultant for Ilwaco, Hayes serves as the forestry management expert for city officials. Hayes, who received a Master of Forestry from Yale in 2015, said that community forests can serve as a stabilizing force in its communities, as well as protect drinking water both now and for the next 100 years.

Together, the group examined several different funding strategies that would allow them to purchase the roughly 390 acres in question. As of now, the estimated acquisition cost of the land is $1.53 million and the cost of the timber deeds is $1.3 million, for a total of $2.84 million.

“The only way that this project can really go on is with additional funding from state and federal sources,” Plotkin said.

The city has been awarded a $3.4 million loan from the Washington State Department of Ecology, which can go toward acquiring the property, but hopes to not have to use any of the loan. The loan can be returned, and interest does not need to be paid unless the money is used.

The city has also applied twice for a DOE Section 319 Grant for $500,000, which offers funding to nonpoint source pollution control projects, but were not selected either time because of the high demand for that grant. The group has higher hopes of receiving the grant this fall after explaining to the DOE as to why this land acquisition project is important for protecting infrastructure.

“The thinking, until very recently, hasn’t gotten to the DOE that purchasing and controlling the timber land within the watershed will protect that source water,” Lessnau said.

The group also submitted an application for a $600,000 grant from the USDA Community Forest and Open Space Conservation Program that is currently under consideration. However, that grant could only be applied to the acquisition of the 210 acres of land, and not to the timber deed acquisition, which the group says is the most important of the two acquisitions. A decision is expected by this spring.

The city is also looking to submit a request to the Washington State Legislature for funding at the beginning of the next legislative session in 2021. Attendees of the workshop said that they believe they would have a compelling case a state appropriation.

If the city can’t cover the entire cost of the project through grants, they would then look toward pairing grants with city funds, which could include a water rate increase. City officials acknowledged at the workshop that the water rates were already high.

The city hopes to have its funding strategy in place by this summer.

Once the land and timber deeds have been acquired, the city would be able to open a new revenue source if they decide to harvest any of the timberland. At the workshop, Hayes said his recommendation is for the city to harvest anywhere from 25-50% of the newly acquired timberland.

Theoretically, the city could choose to harvest 100% of all of the newly acquired timber, but Hayes strongly recommended not doing so.

City officials also said they had no appetite to do so, reiterating that the project is intended to be beneficial to both the local economy and environment.