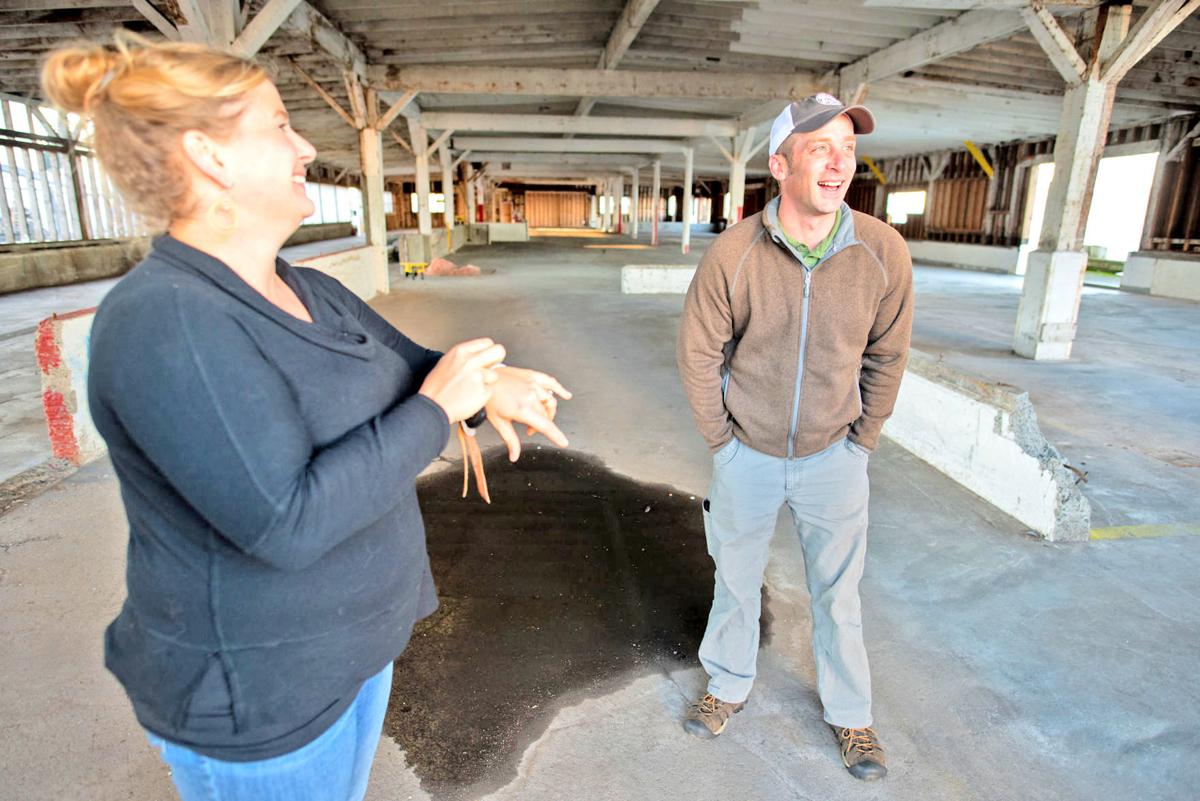 Tiffany Turner, of Adrift Hospitality, left, and Luke Colvin, from Buoy Beer Co., stand in the abandoned sardine cannery that will soon become the Bowline Hotel. 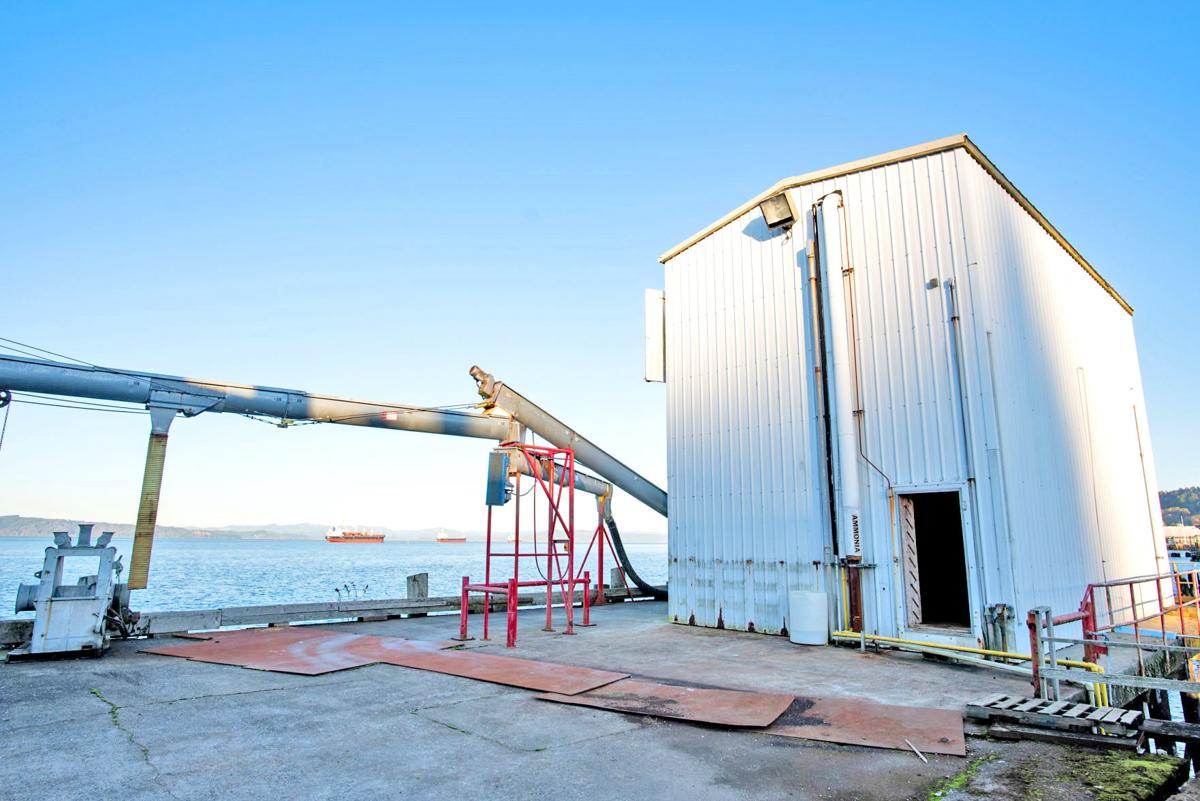 The former icehouse sits on the same property adjacent to the old cannery and will hold a new high-end seafood restaurant.

Tiffany Turner, of Adrift Hospitality, left, and Luke Colvin, from Buoy Beer Co., stand in the abandoned sardine cannery that will soon become the Bowline Hotel.

The former icehouse sits on the same property adjacent to the old cannery and will hold a new high-end seafood restaurant.

The partners behind the hotel are now preparing for a public area and fine seafood restaurant at the foot of Ninth Street after receiving permission from the City Council earlier this month.

Bowline Investors, the group behind the hotel, includes Luke Colvin and Dave Kroening, of Buoy Beer; Ilwaco resident Tiffany Turner, of Adrift Hospitality; and other regional investors. Turner’s company would operate the lodging, and Buoy the restaurant. Bowline hopes to open both spaces by the end of next year.

The Bowline Hotel would include 39 rooms on either side of the former Sebastian-Stewart Fish Co. building, constructed in 1946. The building was most recently used to process anchovies until the fishery declined, the equipment was auctioned off and the space went vacant before being sold.

Bowline has avoided the opposition some other riverfront hotel projects have faced by staying within the confines of the existing two-story building. It will include a lobby off of Ninth Street and a central kitchen area. Thirty rooms will line the sides of the building, facing either the Astoria Riverfront Trolley tracks or Columbia River, along with seven suites upstairs.

Buoy Beer, built out of a former Bornstein Seafoods plant, incorporated the building’s open beams, original floors and even a fish ladder in the main dining room. Colvin said a similar authentic style will pervade the hotel.

“We’re not going to sterilize the soul of the building,” he said. “We’re going to really embrace the soul, rather than trying to get rid of it.”

Adrift values having open spaces for the public at its hotels, Turner said. The company’s lodgings on the Long Beach Peninsula feature restaurants.

The dock outside the Bowline, cordoned off by fences, will open to the public with Adirondack chairs and fire pits similar to a space outside Buoy Beer. In a former icehouse at the end of Ninth Street, Buoy Beer will open a higher-end seafood restaurant with two hotel suites above.

“It’s going to be focused on just seafood, a raw bar, stuff like that,” Colvin said. “And then in the summer months, we will be able to expand with some temporary, very nice tents. Some of the things we’ve thrown around is the fire pits, doing a traditional Scandinavian salmon bake or whatever.”

The additional space will allow the packed Buoy Beer to expand operations in the summer tourist season and then retract as winter returns, Colvin said.

Buoy Beer and the hotel are separate entities.

But Colvin and Turner see the two operations as a synergistic campus where people can stay at the hotel, eat at Buoy’s restaurants and explore the community.

“We want to keep adding to the destination feel of the Astoria waterfront,” Colvin said. It “will be obviously beneficial to us, but we see it being very beneficial to other businesses within Astoria.”

The City Council approved both an encroachment on the Ninth Street right of way and a lease of the encroached area to Bowline. The approval has triggered reviews of a larger policy of leasing private docks in public rights of way, City Manager Brett Estes said at the meeting earlier this month.

“There are rights of way that extend out into the river, but improvements north of the (Astoria Riverfront) Trolley line are generally private improvements,” Estes said. “Those are docks within rights of way, and it’s acknowledged that they’ve never been accepted by the city, but there has never been a mechanism put in place for what we call a license to occupy.”

The city will see more of these types of agreements as it works with other property owners along the street ends, Estes said.

An added complication is that rail companies reserve the right to retake their right of way along the trolley line if trains return to Astoria, he said. Economics make a return of freight rail highly unlikely.

City councilors have stressed the importance of assuring public access to the street ends. Bowline has already improved public views along Ninth Street by removing a shed that had been installed by the cannery within the street’s view corridor, Estes said.

In exchange for being able to occupy the public right of way, private companies agree to cover the cost of inspecting and maintaining the docks. The city feels that arrangement is fair, Estes said.

The piling underneath Ninth Street and the Bowline Hotel is in fairly good condition compared to Buoy Beer, which had to be saved from slowly falling into the river, Colvin said.

“It’s part of the charm and beauty of being on the water, which is a value,” he said of pilings. “And it’s also a liability, because it’s expensive.”