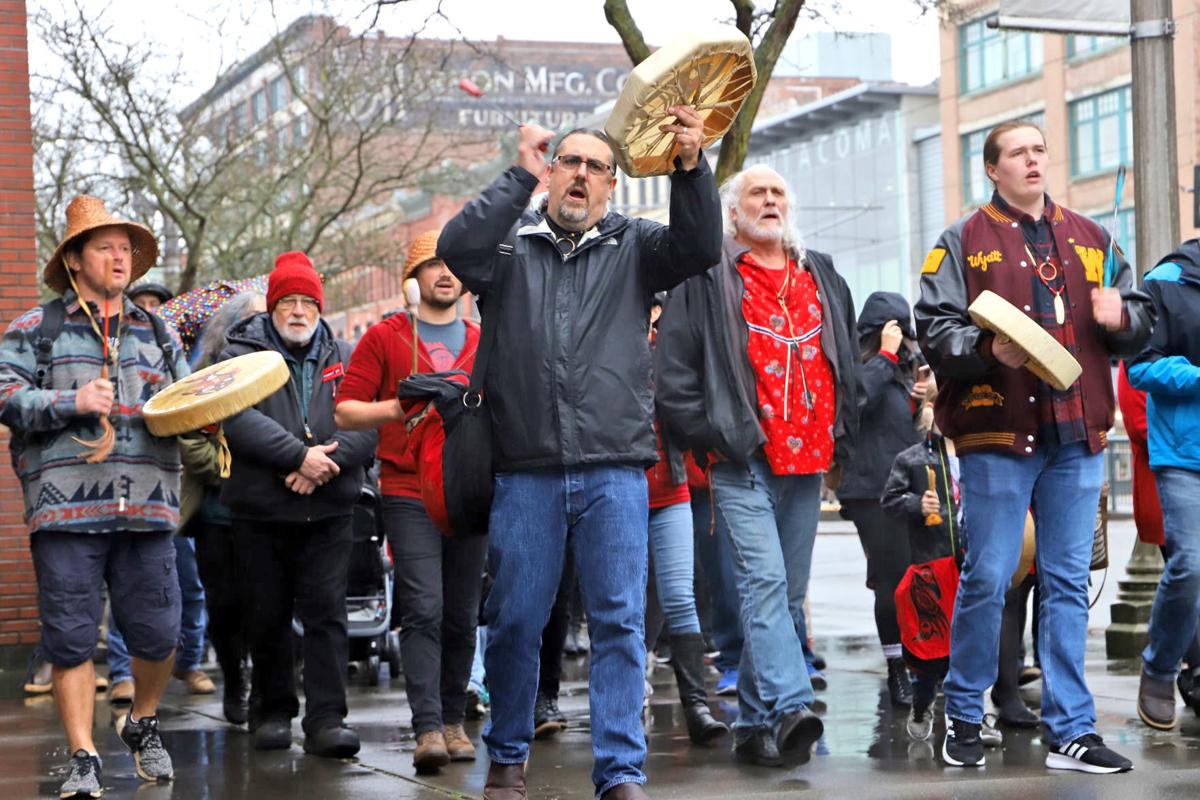 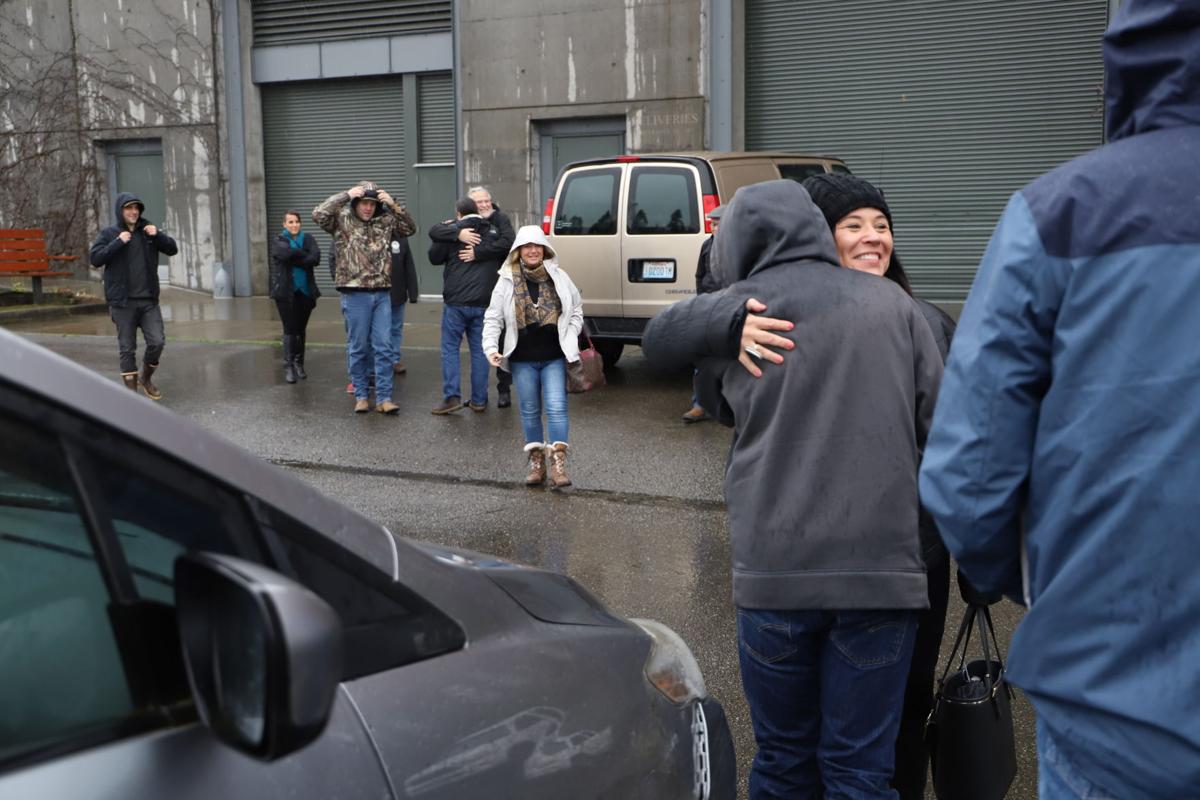 Lisa Leno with the Confederated Tribes of Grand Ronde greets the Johnson family from the Chinook Indian Nation. 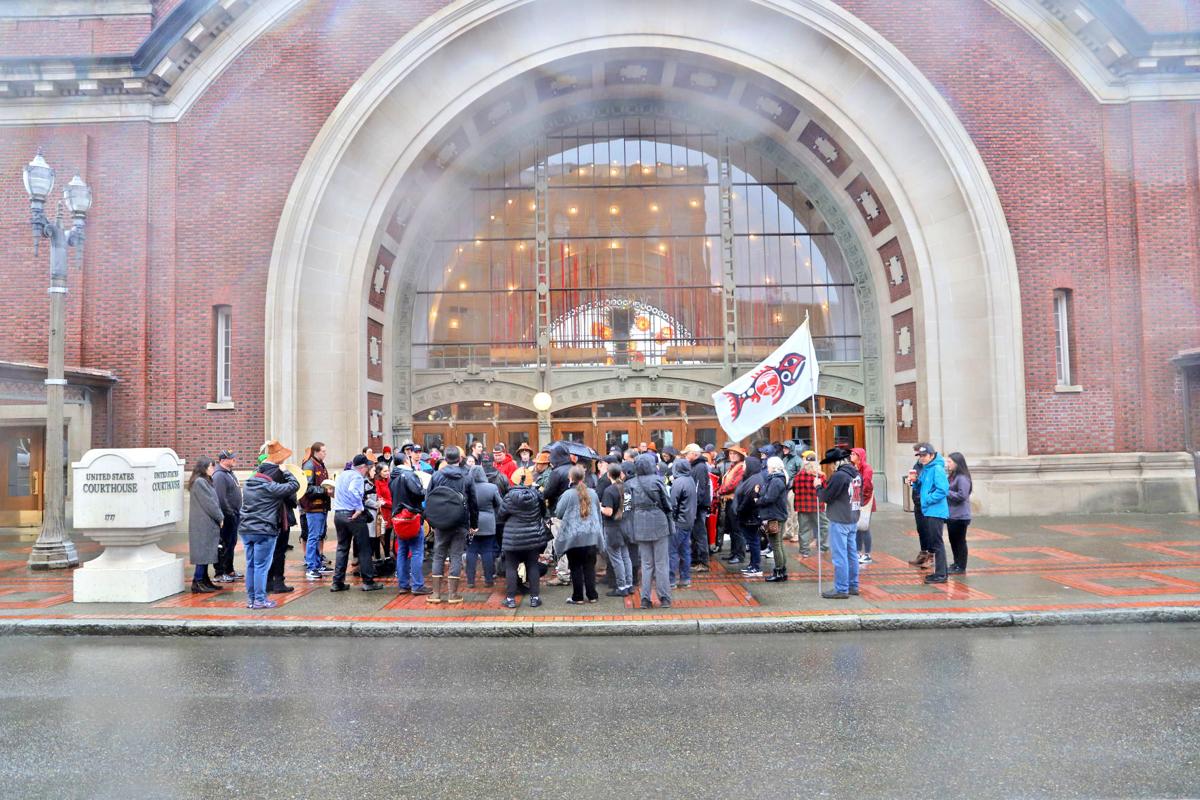 More than 60 people gathered Jan. 6 to support the Chinook Indian Nation ahead of a hearing on whether the tribe would be allowed to reapply for federal recognition. 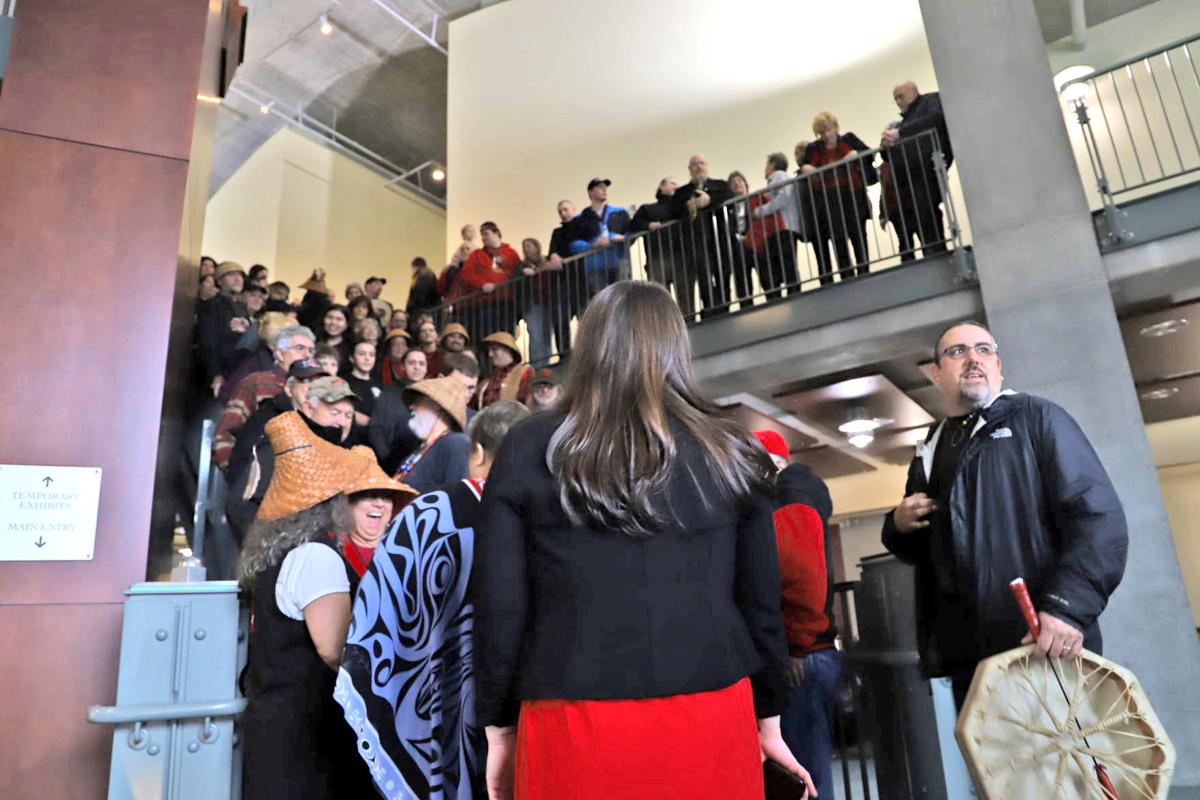 Chinook Indian Nation Chairman Tony Johnson gathers the people who came to support the tribe before its court hearing.

Lisa Leno with the Confederated Tribes of Grand Ronde greets the Johnson family from the Chinook Indian Nation.

More than 60 people gathered Jan. 6 to support the Chinook Indian Nation ahead of a hearing on whether the tribe would be allowed to reapply for federal recognition.

Chinook Indian Nation Chairman Tony Johnson gathers the people who came to support the tribe before its court hearing.

TACOMA — During a hearing Monday, Jan. 6 over whether the Chinook Indian Nation will be able to reapply for federal recognition, the judge in the case called out the U.S.’s mistreatment of Native American tribes.

The tribe is suing the U.S. Department of the Interior and the Bureau of Indian Affairs over a rule that says a tribe that failed in its first petition for federal recognition cannot apply a second time. U.S. District Court Judge Ronald B. Leighton is presiding over the case.

Federally recognized tribes are American Indian or Alaska Native tribal entities that have sovereignty within the U.S. Recognized tribes can do direct business with the federal government and are entitled to certain benefits, services and protections.

The Chinook Indian Nation was federally recognized in 2001 for about 18 months before the George W. Bush administration revoked its recognition. In 2017, the tribe sued for the right to repetition after the federal recognition process was overhauled. Part of the tribe’s argument for why it should be able to reapply is that the rule changes give it a better chance than it had when it applied in 2001.

Leighton said it is unclear whether the new process is different, “because there is so much mischief in the treatment of the Indian in this country.”

“If I were just a citizen today or if I were in Congress, I would be in favor of a deep dive into the bastardization of the administrative process,” Leighton said.

Leighton was asked to rule on two issues Monday. The first is whether the U.S. Department of the Interior can ban tribes from repetitioning for recognition. The second is whether the department erred when it said the tribe had to be federally recognized to be beneficiaries of funds awarded to Chinook descendants for the land taken from the tribe in the 19th century.

Leighton said he would issue a ruling within two weeks of Monday’s hearing.

About 60 people gathered together outside the U.S. District Court in Tacoma ahead of the hearing. The crowd stood in the rain, praying and singing together. In total, representatives from more than seven tribes across the country came to stand with the Chinook.

This included the Confederated Tribes of Grand Ronde. The tribe is no stranger to the issue of recognition. In 1954 the federal government cut ties with the tribe as part of the Western Oregon Indian Termination Act. The tribe’s status wasn’t restored until 1983. Grand Ronde Tribal Secretary Jon George was born while the tribe was terminated and he remembers the years of fighting in between. He believes the Chinook will win out in the end.

“The injustice will be righted,” George said.

In addition to the Grand Ronde, Ken Workman, a member of the Duwamish tribe and a descendant of Chief Seattle, came to the rally. The Duwamish are another Washington tribe fighting for recognition. And Patty Gaiser from the Cowlitz Indian Tribe was among those who led the crowd in drumming and singing.

Chinook Indian Nation Chairman Tony Johnson thanked the crowd of people who had come to support the Chinook, his voice tight with emotion.

The Chinook Indian Nation is made up of the five western-most Chinookan-speaking tribes at the mouth of the Columbia River.

In the 1890s, former Chinook Chairman Gary Johnson’s great-grandfather was part of the group of community leaders who hired the tribe’s first lawyer to address the fact that the tribe’s lands were taken and the tribe was never compensated. But it also never gave up its land and the U.S. never conquered the Chinook through war, which are the two ways the U.S. can acquire land, Gary Johnson said.

“It’s those kind of facts that we don’t understand how the federal government looks past,” he said.

Tony Johnson is Gary Johnson’s son and spent his life watching previous generations fight inch-by-inch for the rights of Native American tribes. He was influenced by men like former councilmen Fred Lagergren and Ben Reed, both of whom were huge advocates for recognition. In the 18 months the tribe was recognized, both Lagergren's and Reed's health deteriorated and when the tribe’s recognition was rescinded, neither of the mens' families told them. They both died not long after.

The front row of Chinook tribal meetings is normally filled by tribal elders, the cultural keepers of the tribe.

“The sad reality is we’ve all watched as that front row passes away and a new one takes its place,” Mechele Johnson said.

The Chinook’s fight for the right to govern itself on its land has gone on for 168 years, said Rachel Lynne Cushman, treasurer for the Chinook Indian Nation. Since she was a child she knew she was Chinook, regardless of what the federal government said. But lack of federal recognition changed how others saw her. At one time she was a finalist for the Gates Millenium Scholarship, which has a category for students from federal and state recognized tribes. She was disqualified because of the Chinook’s lack of official status.

The Chinook cannot benefit from things like the Indian Child Welfare Act, Cushman said. The act was created to help Native American children in the foster care system stay in their tribal communities.

Tammy Davies was at the event wearing a shirt that said #ChinookJustice.

“I don’t need the federal government to tell me who I am, but I’d sure as hell like them to acknowledge who I am,” Davies said.

The hearing Monday lasted about two hours. The majority of the arguments focused on whether the Bureau of Indian Affairs was correct in banning tribes from reapplying for federal recognition. The attorney representing the bureau was Assistant U.S. Attorney Brian Kipnas.

The ban on allowing tribes to reapply for federal recognition makes no sense, Leighton said. And one of Kipnas’ arguments, that repetitioning would put too great a workload on the Bureau of Indian Affairs, was a weak one, Leighton said.

Setting aside that point, Kipnas gave justifications for the ban, and said it helped provide rulings on recognition with finality.

Kipnas also took issue with the fact that the tribe did not appeal the reversal of recognition. If the tribe wanted to argue the reversal was unfair, it should have sought a district court ruling right away, he said.

During that time, Bill Clinton’s administration was replaced by George W. Bush’s administration. The Quinault Indian Nation appealed the decision and the federal government revoked the Chinook’s recognition.

The leadership of the Quinault Tribe north along the Washington coast has been particularly tenacious in working to block efforts by their hereditary rivals on the Lower Columbia, fearing adverse impacts on Quinault interests. Some Chinooks are registered members of the Quinault Nation and more own land within that reservation.

Kipnas rejected the idea the reversal of recognition was because the White House moved from Democrat to a Republican. Neal McCabe, who was the assistant secretary of the Interior for Indian Affairs under the Bush administration, pointed out clear gaps in the Chinook’s application for recognition, Kipnas said.

Some of the requirements set by the federal recognition process prior to 2015 seemed to misunderstand the history of tribes in the U.S. This included a requirement the tribe provide records of its continued existence, Tienson said.

Tienson pointed out the rule requiring tribes to provide documentation of ongoing political continuity when for years the U.S. there were laws against Native American visiting one another.

Earlier in the day when discussing the case, Gary Johnson mentioned how frustrating this particular requirement was.

“We were supposed to keep copious records of our illegal activity,” he said.

Leighton noted at the end of the hearing that he would be retiring from the bench in August. He said his goal was to clean up some of the issues in the case before the next judge takes over.

“This is a momentous decision for these people,” Leighton said. “It should be done soberly and with grace.”

Even if the judge finds in favor of the Chinook, the tribe would still have to repetition the Bureau of Indian Affairs for recognition, Tienson said. And the government would likely appeal the judge’s decision before that could happen.