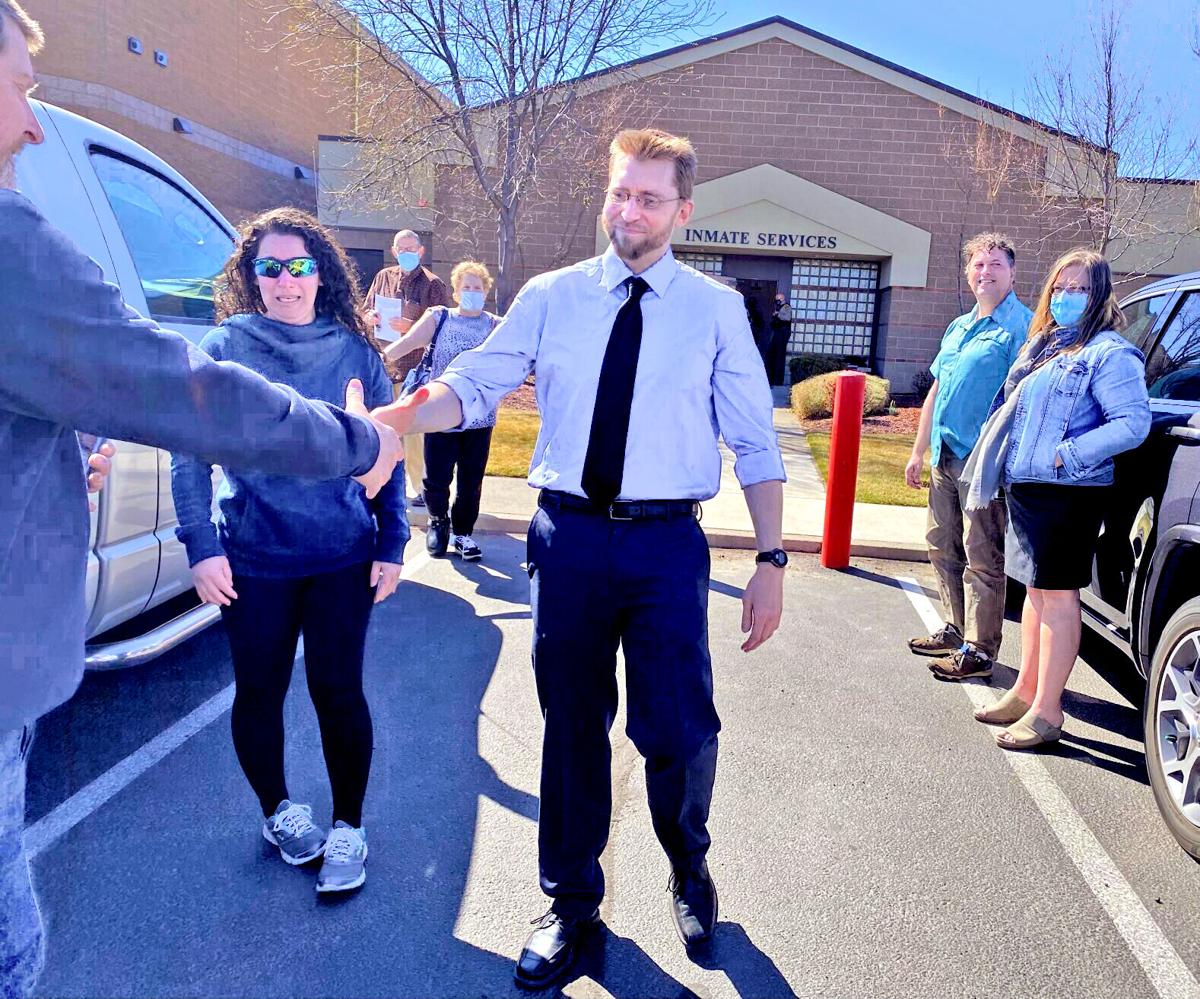 Luke Wirkkala greets supporters outside the Deschutes County jail following his acquittal Monday in his retrial for a murder charge. 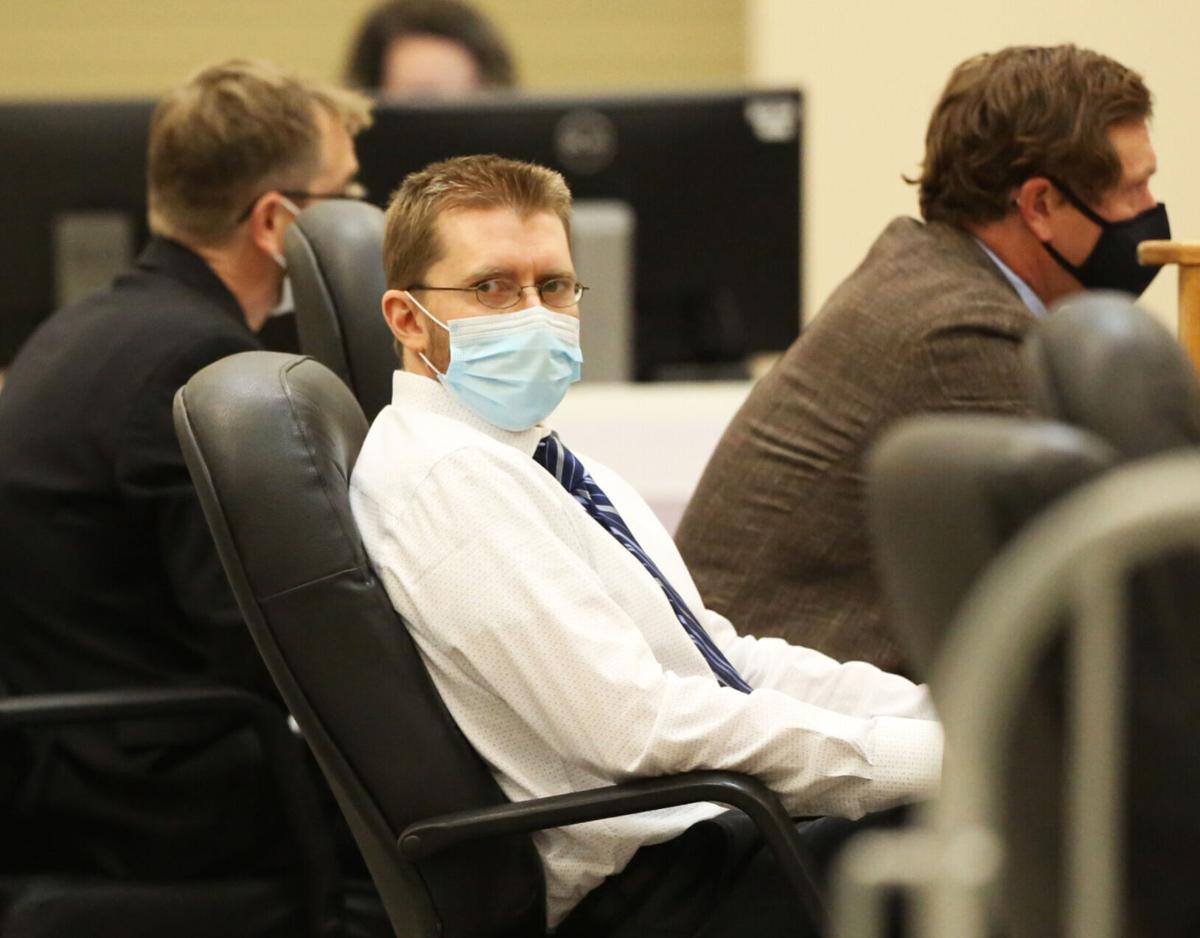 Luke Wirkkala, seen March 19 during his retrial, had been accused of killing a houseguest in 2013. He was acquitted of all charges Monday.

Luke Wirkkala greets supporters outside the Deschutes County jail following his acquittal Monday in his retrial for a murder charge.

Luke Wirkkala, seen March 19 during his retrial, had been accused of killing a houseguest in 2013. He was acquitted of all charges Monday.

REDMOND — First, he was called an accused murderer. Then, a convicted murderer and state prison inmate working on a life sentence.

“I’m just trying to take it all in,” Wirkkala said minutes after emerging from the Deschutes County jail, a smile overtaking his face. “It feels a little surreal. Eight long years.”

A half-hour earlier, a jury found Wirkkala, 40, not guilty in the death of David Andrew Ryder, a houseguest Wirkkala had shot at close range with a pump-action shotgun in 2013. Jurors also acquitted Wirkkala on lesser counts of first-degree manslaughter and second-degree manslaughter. They reached all verdicts by votes of 10-2; Oregon allows non-unanimous verdicts in some circumstances.

It was Wirkkala’s second murder trial for Ryder’s death — he was convicted in 2014, but the Oregon Court of Appeals ordered a retrial because the original jury heard portions of a police interview after Wirkkala had invoked his right to an attorney.

The retrial in a makeshift courtroom at the Deschutes County Fair & Expo Center was a dry and, at times, emotional four-week affair.

Wirkkala is a 1999 graduate of Ilwaco High School, the son of Victor and Judy Wirkkala of Chinook. He worked as a freelancer for EO Media Group for a while, most recently writing a feature on charter fishing that appeared in the Active Lives supplement in December 2009.

The defense argued Wirkkala acted in self-defense when he shot Ryder.

The state, represented by the Oregon Department of Justice, asked jurors to convict because Wirkkala’s account, as prosecutor Kristen Hoffmeyer said repeatedly, “simply could not be believed.”

All 12 jurors declined requests to explain their votes. One said only the state hadn’t made its case.

Many of the witnesses were back from the first trial and offered, in large part, the same testimony, the facts of the case remaining essentially the same.

Wirkkala and Ryder were friends, though not good friends, having only hung out a handful of times. Wirkkala and his then-girlfriend tried to wrangle friends to attend a Super Bowl party at the Hideaway Tavern in Bend, but in the end, everyone backed out except Ryder.

Wirkkala testified he drank throughout that day — before and throughout the game and then back at his house, where he and Ryder drank a case of Pabst Blue Ribbon beer.

Wirkkala’s girlfriend, her son and her nephew went to bed between 10 and 10:30 p.m. Around 2:30 a.m. they were awoken by a shotgun blast in the living room.

Police arrived to find Ryder dead on the floor inside, Wirkkala sobbing nearby.

Wirkkala always said he awoke that night to Ryder sexually assaulting him. He retrieved his shotgun from his bedroom, returned to the living room and ordered Ryder to leave. Wirkkala said he racked a shell to show Ryder he was serious but instead a “twisted smirk” crossed Ryder’s face and he charged Wirkkala, forcing him to fire.

The original jury did not accept that explanation and voted to convict. In 2018, the Oregon Court of Appeals vacated his conviction.

It’s customary for courtroom attendees to stand when a jury enters and exits a courtroom. On Monday, after Deschutes County Circuit Judge Randy Miller excused the jury from service, Wirkkala was first to stand. He steepled his fingers before his chest and rocked his hands back and forth, as if saying thank you.

Miller told the onetime defendant: “Mr. Wirkkala, you are free to go.”

From there, guards transported Wirkkala from Redmond back to the Deschutes County jail in Bend. They wheeled out a tub containing Wirkkala’s belongings, including the flip phone seized when he was arrested in 2013.

Around a dozen well-wishers were there to greet him and take pictures. Many had supported him through his first trial. The party intended to caravan to Portland, where Wirkkala hoped to eat a “real” meal for dinner after years of jail food.

As for what’s after that, Wirkkala said, “life begins at 40.” He’d like to resume writing and photography, which he pursued prior to his conviction. He hopes to publish a book he started in prison about his experience being wrongfully accused.

He thanked God, his family and friends who supported him, his attorneys Thad Betz and Joel Wirtz, and the jury.

He said that while locked up, he committed to pursuing positive growth.

“I told myself if I didn’t come out of this experience a better person than when I went in, then I’ve failed,” he said. “I feel like I’ve become a stronger person because of this. And I’ll never take anything for granted, that’s for absolute sure.”