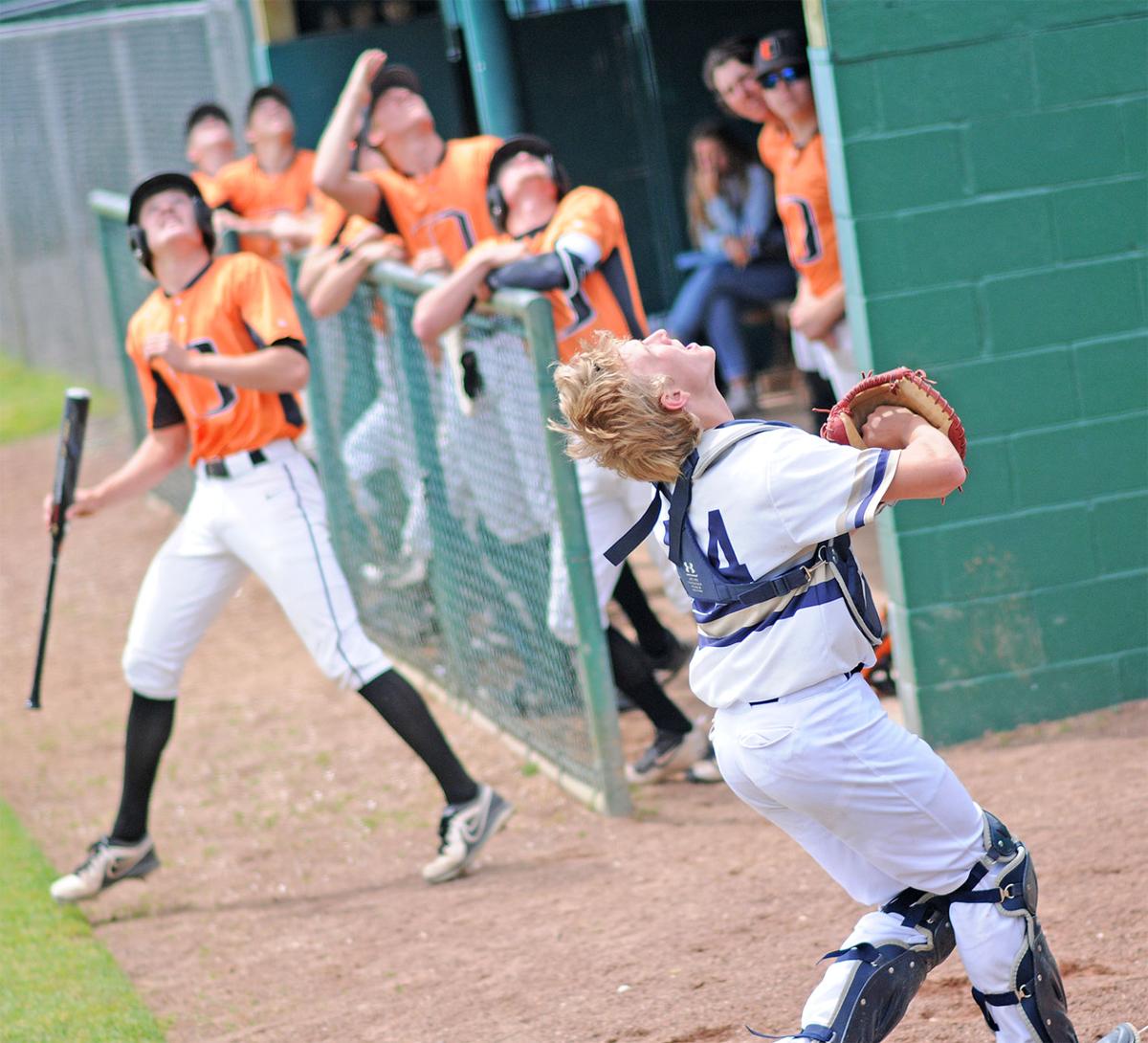 Kolton Lindstrom, pictured trying to snag a foul ball during last year’s baseball season, is one of several local athletes advocating for their schools to be allowed to conduct something closer to normal 2020-21 sports seasons. 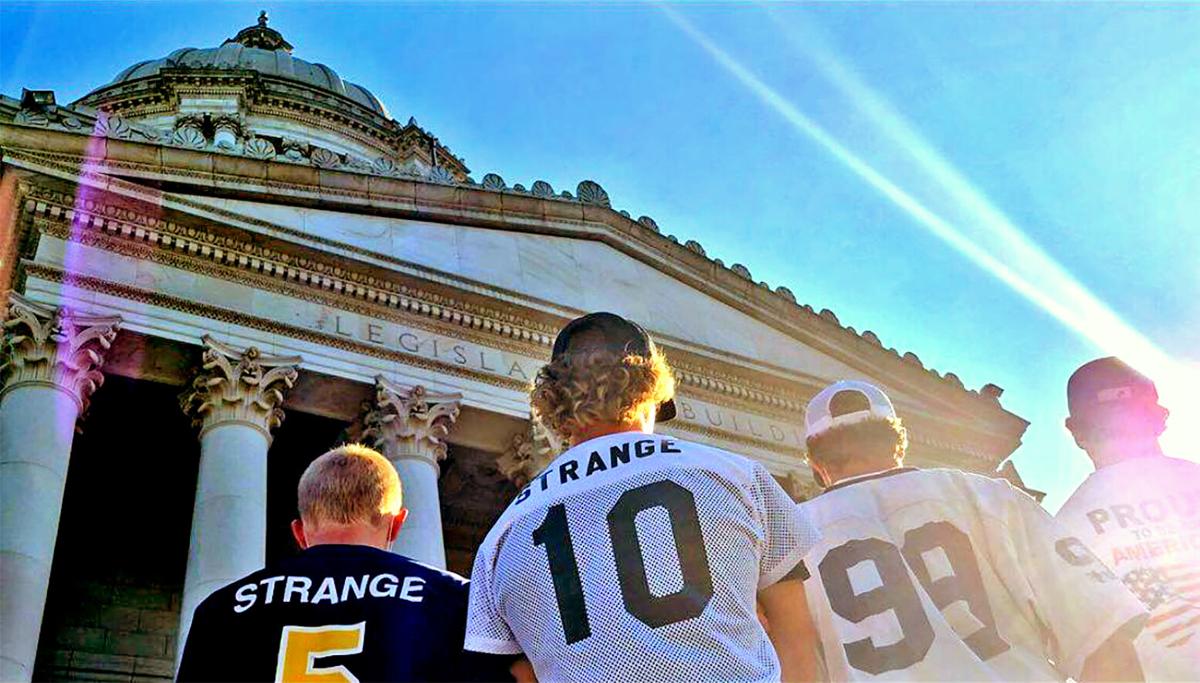 Naselle football players and other student atheletes from around the state mounted a protest on the Capitol steps in Olympia seeking state assistance in conducting a more normal prep season than is currently planned due to covid-19 restrictions.

Kolton Lindstrom, pictured trying to snag a foul ball during last year’s baseball season, is one of several local athletes advocating for their schools to be allowed to conduct something closer to normal 2020-21 sports seasons.

Naselle football players and other student atheletes from around the state mounted a protest on the Capitol steps in Olympia seeking state assistance in conducting a more normal prep season than is currently planned due to covid-19 restrictions.

OLYMPIA — Five Naselle High School football players attended a rally at the state Capitol to try to reverse the decision to delay many fall sports, including football.

The rally was organized by the Student Athletes of Washington, a group that emerged with a change.org petition from Mount Si running back Cole Norah. Football and volleyball are set to start in March rather than this fall in the hope that the coronavirus will be less of a threat by then.

Young activists from around the state, along with parents and coaches, gathered on the Capitol steps, where students delivered speeches making their case. The protests are directed against the delay of fall sports into the spring. But they come as the state’s high school sports face a season in which district and state championship events are in doubt, and programs can’t really be sure they are going to have a season at all.

The sports calendar released by the Washington Interscholastic Activities Association (WIAA), the Renton-based governing body for high school sports in Washington, calls for a compressed football season running two months, March and April. Normally, the season including the state playoffs runs about three months. Most other sports seasons will be similarly compressed.

“There’s talk about there’s not going to be any State, and that’s the reason you want to play, to compete for the championship,” said Lindstrom, whose Comets reached the football state championship game against Odessa and the semifinals in basketball last season.

Lindstrom, a sophomore, said some of the concern from fellow rally-goers also stemmed from a feared loss of exposure to college football recruiters. Thirty-four states are playing their football seasons as regularly scheduled, according to the change.org petition. That could mean college coaches will already have their plans set and offers made to athletes from other states by time Washington’s season starts. Norah, the Mount Si back, is a two-star recruit entering his senior year, a fringe prospect who could boost his status with a big season.

The petition argued that athletes are willing to accept risk, and “we know to stay away from our grandparents, who are the most vulnerable.” To appeal to policymakers, it made the case for the positive impacts of sports on the lives of youth, and raised the argument about exposure to recruiters. Of course, athletes themselves care about the sports season for its own sake.

'It means a lot. You don’t get to do this your whole life. Naselle has never won a state championship, and we have a bunch of athletes who won’t be coming back [next year.]'

“It means a lot,” Lindstrom said. “You don’t get to do this your whole life. Naselle has never won a state championship, and we have a bunch of athletes who won’t be coming back [next year.]”

The decision over what to do about the high school sports season involves agonizing trade-offs. And it is one for which no one person or organization has had to take full responsibility.

The WIAA initially announced the revamped sports calendar July 21. At the time, the WIAA presented the decision as being its own, vaguely adding that it was consistent with guidelines on safe return-to-play created in consultation with a national governing body, the governor’s office, athletic directors and others. This announcement came before Gov. Jay Inslee’s Aug. 5 advice cautioning against extracurricular activities for most schools.

But now, WIAA points to the governor as decisive.

“We want all our students participating and the WIAA is ready when we are given clearance from the Governor’s Office and the Department of Health,” WIAA executive director Mark Hoffman told scorebooklive.com in the wake of the protests. “Many assume the WIAA has the authority to make the decision, but it appears our students have identified where that authority rests.”

In other words: as far as WIAA is concerned, students are right to take their protest to Olympia, not Renton.

But the governor has not, strictly speaking, denied schools “clearance” to play. He has instead issued non-binding advice. For schools in communities with more than 25 new covid cases per 100,000 people, the state “strongly” recommends postponing “all in person extracurricular activities,” including sports.

But schools are constrained by what liability insurance companies will cover. Insurance companies fear losing a lawsuit if they go against even non-binding advice from the governor, and so are not covering fall sports, Hoffman told Ron C. Judd of the Seattle Times.

Asked by the Observer whether this was an intended effect of the governor’s advice, Inslee spokesperson Tara Lee said by email “[a]s with other school-related activities, allowing athletics to re-start is a local decision.”

The SWA petition was sent to both the governor and the WIAA, but addressed only to Governor Inslee. Since then, Nolan has requested a meeting between SAW members and representatives of Inslee, the WIAA, and the insurance industry. “I am told that the governor’s staff is having conversations with student leaders and some adults they work with,” Lee said by email.

“It is the governor’s hope that high school football and other sports can go forward with a spring season as proposed by [WIAA].”

Right now, the great majority of the state’s counties are above the 25-new-cases-per-100,000 threshold; the state as a whole is at 88.3 as of Sept. 6. If the spread doesn’t slow, or if the governor doesn’t change his advice, it may not matter what calendar the WIAA has drawn up: the whole sports season could be in jeopardy.

In fact, we are already seeing signs that this is the case. WIAA is allowing cross-country races during fall sports season. As an outdoor, non-contact sport, it is listed as low-risk in WIAA guidance. But Ilwaco, which boasts the defending 1B/2B champion, Daniel Quintana, won’t be competing in the fall. The entirety of Ilwaco’s District IV voted to move cross-country to the alternate spring season provided for by WIAA. Many scheduled meets, too, are being cancelled. Neither Ilwaco nor Naselle is set to compete in the WIAA’s Season One, which consists mostly of sports these schools do not offer.

Even if Student Athletes of Washington is successful in bringing pressure, it may already be too late logistically to achieve its goal of getting the fall sports season back on track. If the athletes do succeed in creating political pressure, its most likely affect, if any, might be to stop the momentum toward further postponement and cancellations. By mobilizing now, they could hope to factor into future decisions.

But the difficulties are formidable. Playing without fans would raise financial challenges. Allowing fans would exacerbate concerns that a sporting event turn into the kind of “superspreader event” that has done so much to keep the virus a threat. Some of the states and localities that are allowing football are allowing fans at football games, often in limited numbers. But it’s not clear that would happen in Washington. And packing indoor gyms with screaming fans would present an even greater risk.

Naselle athletic director Brian Macy said athletic directors and the WIAA have not had talks about the question of whether fans will be allowed. Stressing that he was speaking only for himself, he said he finds it difficult to envision that schools would pack the gym with fans in anything like the current environment.

“We did discuss at one point that finances are a concern,” Macy said. “We may need to look at ways of getting revenue without bringing in fans, like through TV broadcasts.”

Meanwhile, schools are preparing as if basketball season, scheduled to run from Dec. 27 through Feb. 27, is going to happen. Teams are limited to 70% of their normal allotment of games.

The Pacific League, of which Ilwaco High School is a part, is still discussing what the basketball season would look like, athletic director Tim Harrell said. With the restricted number of games, teams could not all play each other twice, and there is talk of dividing the league.

Wrestling, an extremely high contact sport, is theoretically on the WIAA calendar for winter, but Harrell said he does not foresee a wrestling season actually happening. “The WIAA requires that counties be beyond phase four” to hold wrestling tournaments. For basketball, teams must be in a county in phase three or better to compete.

Macy said the WIAA told schools to prepare for six weeks of regular season play, allow a week for Districts and a week for a hypothetical State tournament. State, if it happens, would probably be hosted at high schools rather than the traditional central locations in Spokane, Yakima and Tacoma.

But athletic directors were also asked to brainstorm alternatives to a State championship. Macy’s suggestion was dividing schools by county rather than league or district.

'Right now, there’s no movement toward doing any culminating event — Regional, District, anything.'

Schools have been asked whether they are prepared to host post-season games. For now, there are no actual plans in place for the post-season. “Right now, there’s no movement toward doing any culminating event — Regional, District, anything,” Harrell said.

Naselle’s Columbia Valley league includes schools as away as Battle Ground and Vancouver, and is expanding northward to include Willapa Valley, Pe Ell and Mossyrock. But if Macy’s idea were adopted, “you could have Pacific County all together, maybe with Wahkiakum County. We wouldn’t have to travel to Clark County. It’s just hard to see all counties being in a good place at the same time.” For now, the CVL’s plans are to play a league-only schedule in the regular season.

Harrell, too, noted the same issue. “Our league stretches across four counties,” he said. He expressed doubt that all counties will be in Phase III or better when basketball season starts.