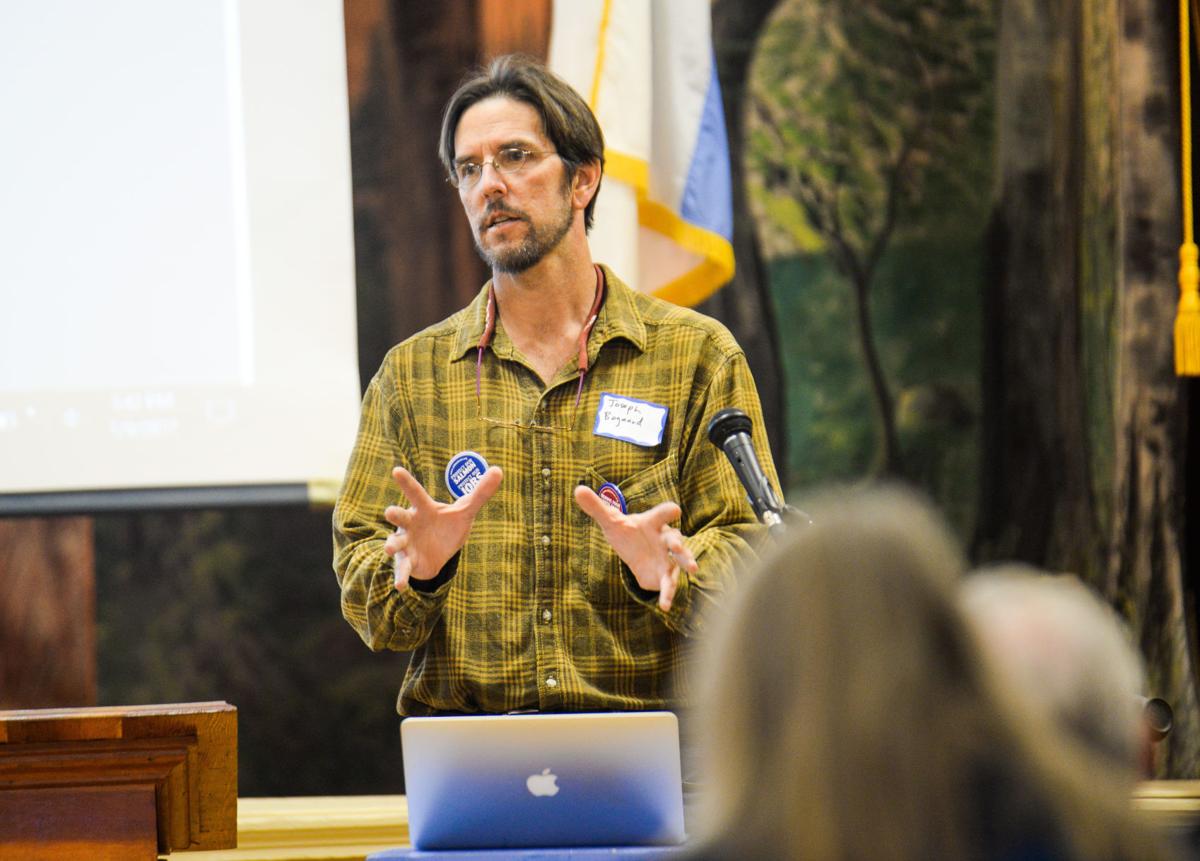 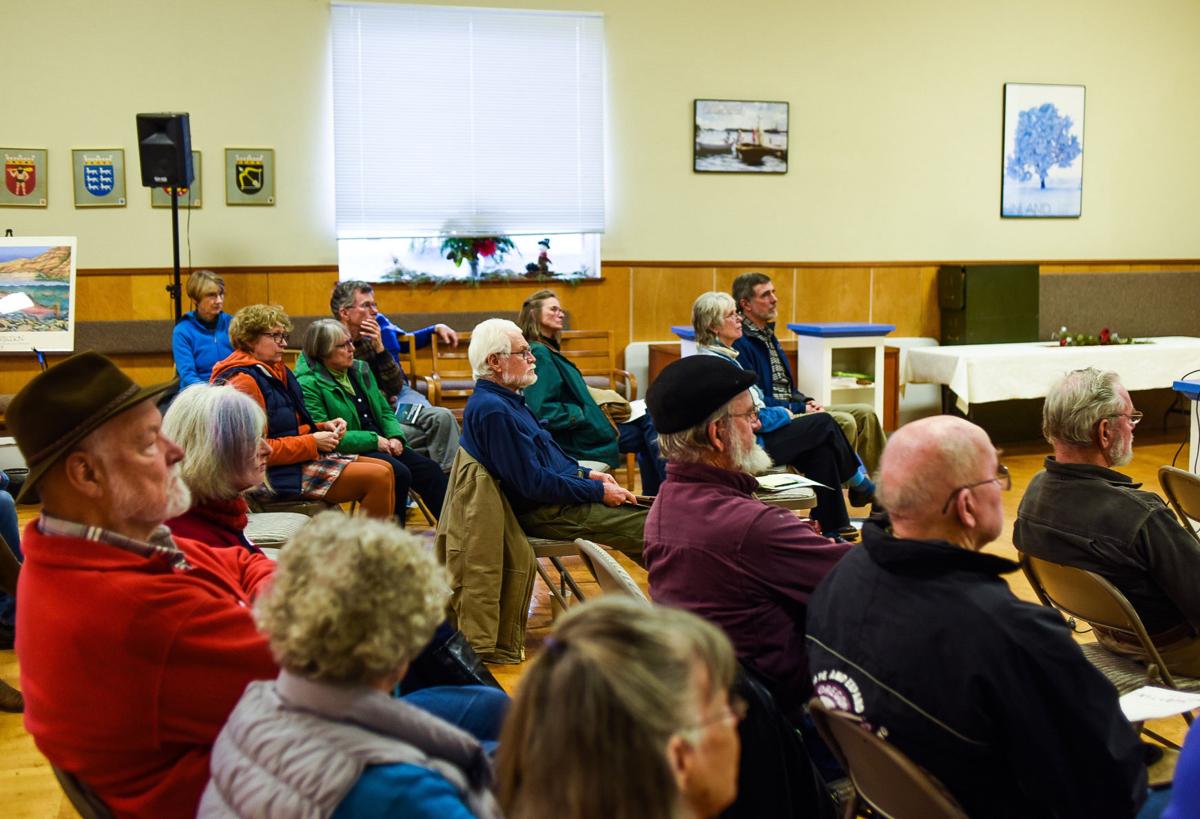 Interested community members sat on a presentation organized by the group Save Our Wild Salmon. 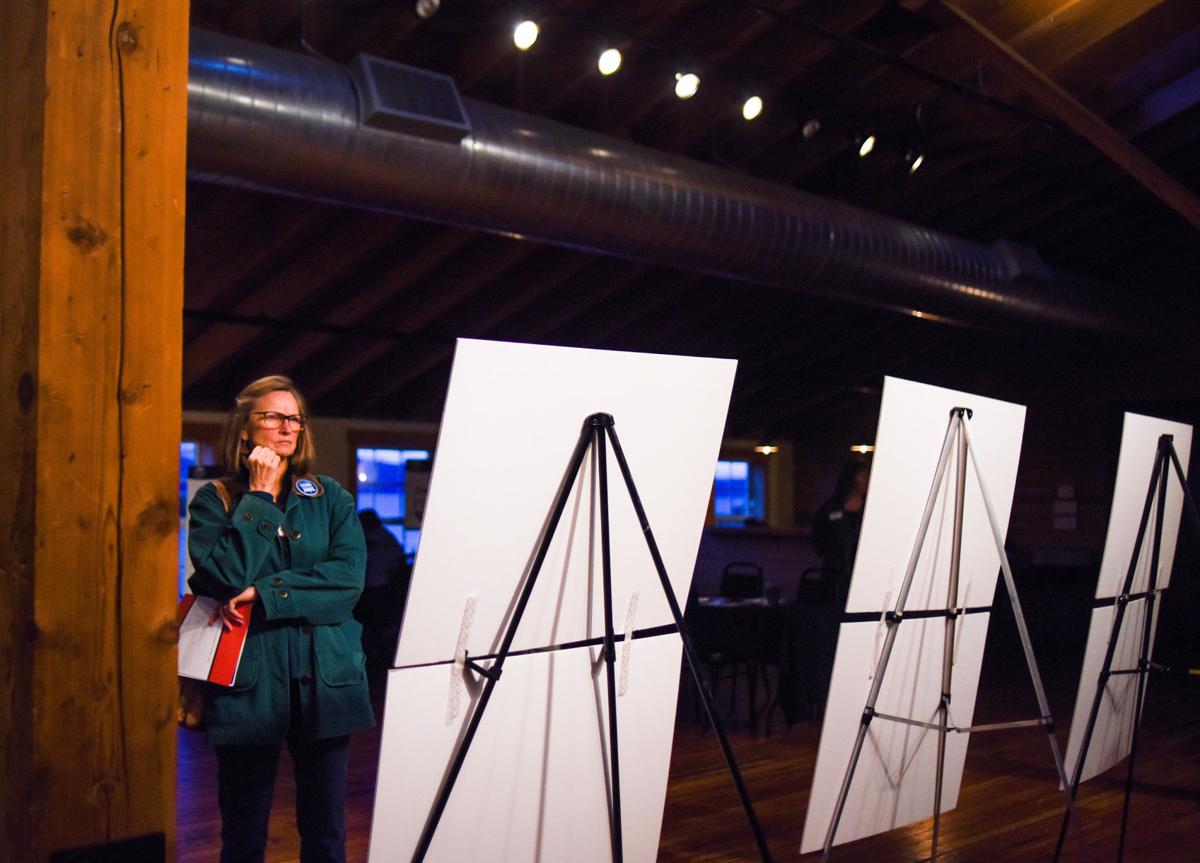 Astoria resident Patty Larsen looked at information during a public scoping meeting presenting information about dams along the Snake River. 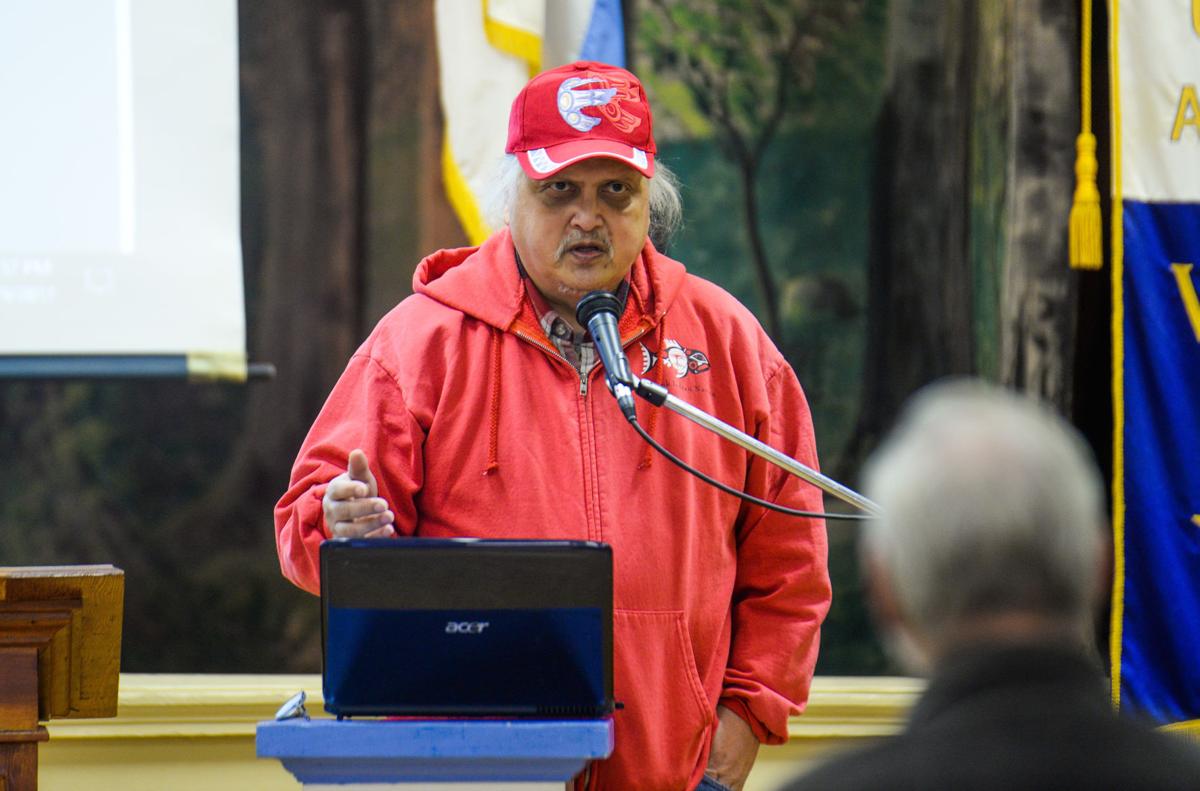 Dioniscio Y. Abing, representing the Chinook Indian Nation, speaks during a gathering organized by Save Our Wild Salmon. 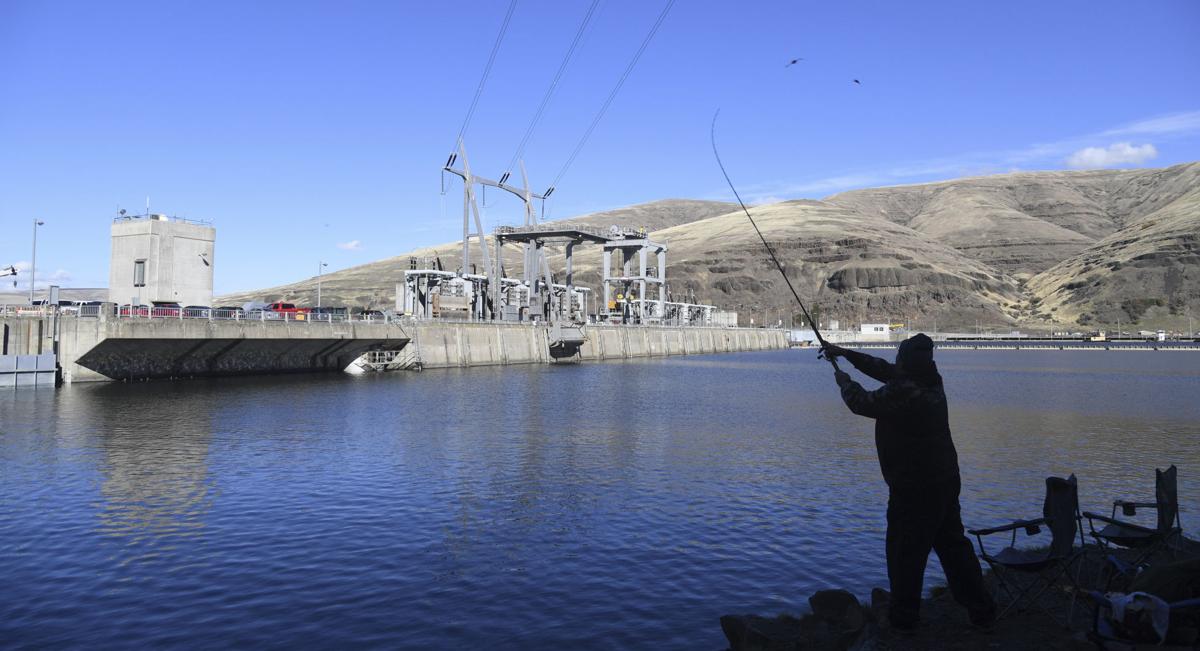 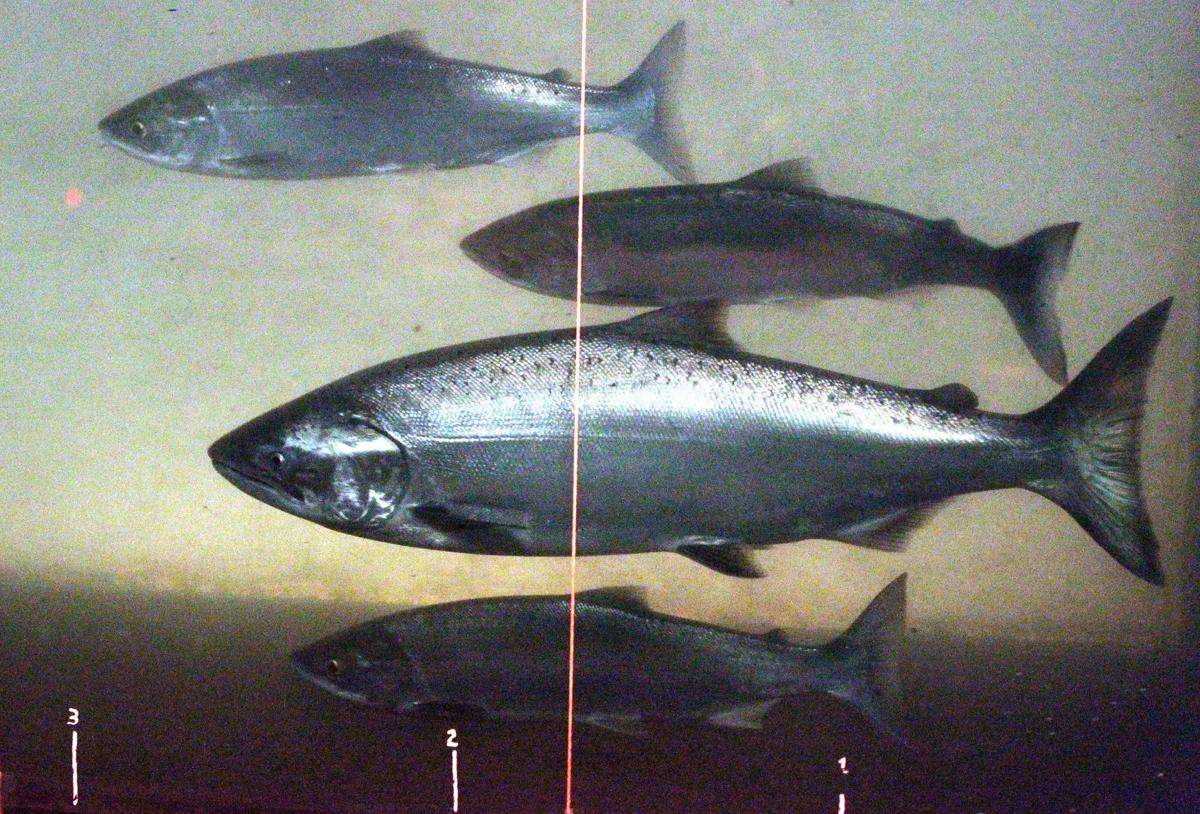 A Chinook salmon, second from the bottom, swims with sockeye salmon past the Bonneville Dam fish-counting window in 2012. In 2015, 99 percent of Snake River sockeye salmon died because of lethally hot water. There is a renewed push to remove dams on the Snake River to support wild salmon runs.

Interested community members sat on a presentation organized by the group Save Our Wild Salmon.

Astoria resident Patty Larsen looked at information during a public scoping meeting presenting information about dams along the Snake River.

Dioniscio Y. Abing, representing the Chinook Indian Nation, speaks during a gathering organized by Save Our Wild Salmon.

A Chinook salmon, second from the bottom, swims with sockeye salmon past the Bonneville Dam fish-counting window in 2012. In 2015, 99 percent of Snake River sockeye salmon died because of lethally hot water. There is a renewed push to remove dams on the Snake River to support wild salmon runs.

ASTORIA — Supporters of the removal of four dams on the Snake River rallied at Astoria’s Suomi Hall Monday before attending the last of 16 public scoping meetings organized by federal agencies to gather public comment on the future operation of the Columbia and Snake hydroelectric dam system.

The scoping meetings have been organized by the U.S. Army Corps of Engineers, the Bonneville Power Administration and the Bureau of Reclamation, tasked with gathering public comment and developing alternatives on how to operate the system.

In May, U.S. District Court Judge Michael Simon ruled the current salmon recovery plan violated the Endangered Species Act by not doing enough to protect 13 listed Columbia River Basin species of salmon and steelhead. It was the fifth-such plan to be rejected.

Simon stopped short of such a pronouncement, but said the government needed to look at more aggressive approaches to help struggling salmonids, including removal of the dams. The four dams on the Snake River provide about 5 percent of the Pacific Northwest’s hydropower, along with barge transport for agricultural products between Lewiston, Idaho, and the Columbia.

Simon’s ruling has renewed a push to remove the dams, seen as an impediment to healthier salmon runs by some and an economic lifeline by others.

“Since the erection of the Snake River dams, I have witnessed the end of … commercial canning in Astoria,” Dioniscio Y. Abing, a self-described adopted member of the Chinook Nation who worked in the former Bumble Bee Cannery on Pier 39, said during the rally at Suomi Hall.

Abing said the removal of two dams on the Olympic Peninsula’s Elwha River showed the benefits, soon to be followed by the removal of several dams on the Klamath River in Oregon and California. He said those opposed to dam removal should look to develop better rail connections to move cargo.

“Astoria is symbolic of the non-native demographic groups that have lost the most in the headlong rush of the federal government into hydropower development of the Columbia River Basin,” said Hobe Kytr of Salmon for All, a local group supporting commercial gillnetters.

Kytr said the previously flourishing salmon canning industry has been decimated by projects like the Grand Coulee Dam, which cut off the upper third of the Columbia from fish passage, and the dams on the Snake River, while commercial fishermen have been unfairly scapegoated.

Dan Serres, the conservation director of environmental group Columbia Riverkeeper, said his group had monitored temperatures in the reservoirs behind each Snake River dam in 2015. “The river temperature steps up with each dam, and it’s obvious why,” he said.

He and Kytr both pointed to 2015, when nearly all Snake River sockeye salmon counted at the Bonneville Dam died amid warm water temperatures before they reached Idaho.

Joseph Bogaard, executive director of Save Our Wild Salmon, said part of the reason for the rally before the scoping meeting was the disenfranchising nature of the federal agencies’ collection of public comment.

Instead of impassioned public comment in front of a crowd, visitors to the scoping meeting walked into The Loft at the Red Building filled with posters displaying information about the hydroelectric dam system and scoping process. Staffers from the federal agencies stood by to help answer questions. Public comment was taken one-on-one through a stenographer, or by writing.

Rebecca Weiss, a program coordinator with the Army Corps, said the format of the meeting was meant to allow more of a two-way dialogue between visitors and staffers. She said the agencies expect about 50,000 public comments from the scoping period, most of them standardized form letters created by various groups and signed by supporters, from as close as Astoria to as far away as Sweden. “They’re all weighed the same as far as scoping,” she said.

Bogaard argued the format allowed the agencies to control the information being presented — information based on salmon recovery plans that have been struck down by a federal judge.

He and other locals took umbrage at only one of the 16 meetings being held on the coast, arguing that salmon migrate out of the Columbia as far as Alaska, affecting much of the coastline.

Sonja Kokos, an environmental compliance officer with the Bureau of Reclamation, said the 16 meetings were sited based on the location of projects and multiple benefits they provide to society. “Those are all on the same playing field, just like the fish,” she said.