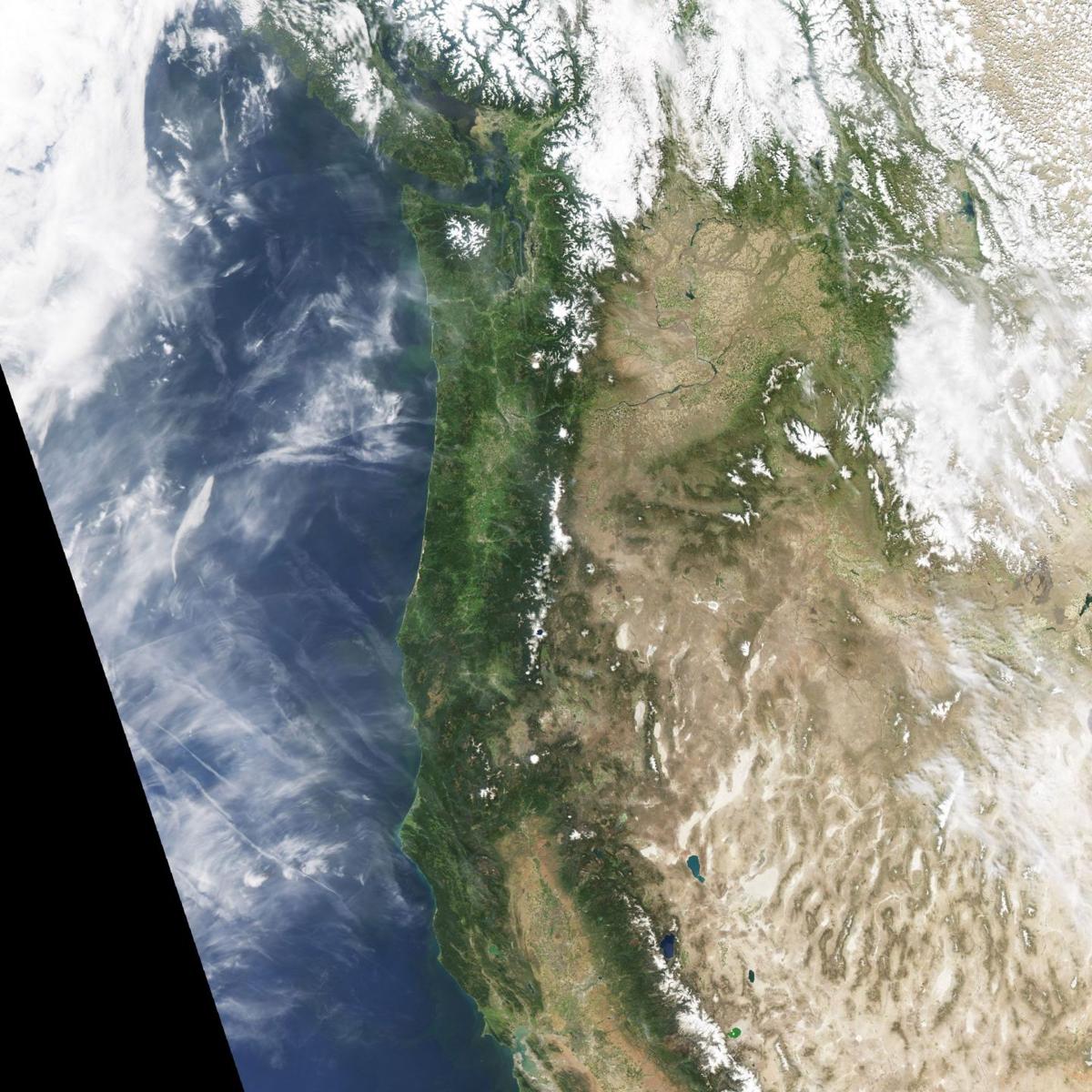 The Moderate Resolution Imaging Spectroradiometer on NASA' Aqua satellite acquired these natural-color images of Oregon, Washington and the Cascade and Olympic Mountains. The left image shows the region on May 13, 2014, while the right was acquired on May 3, 2015. Last year was not necessarily good for snowpack, but it was substantially better than 2015. 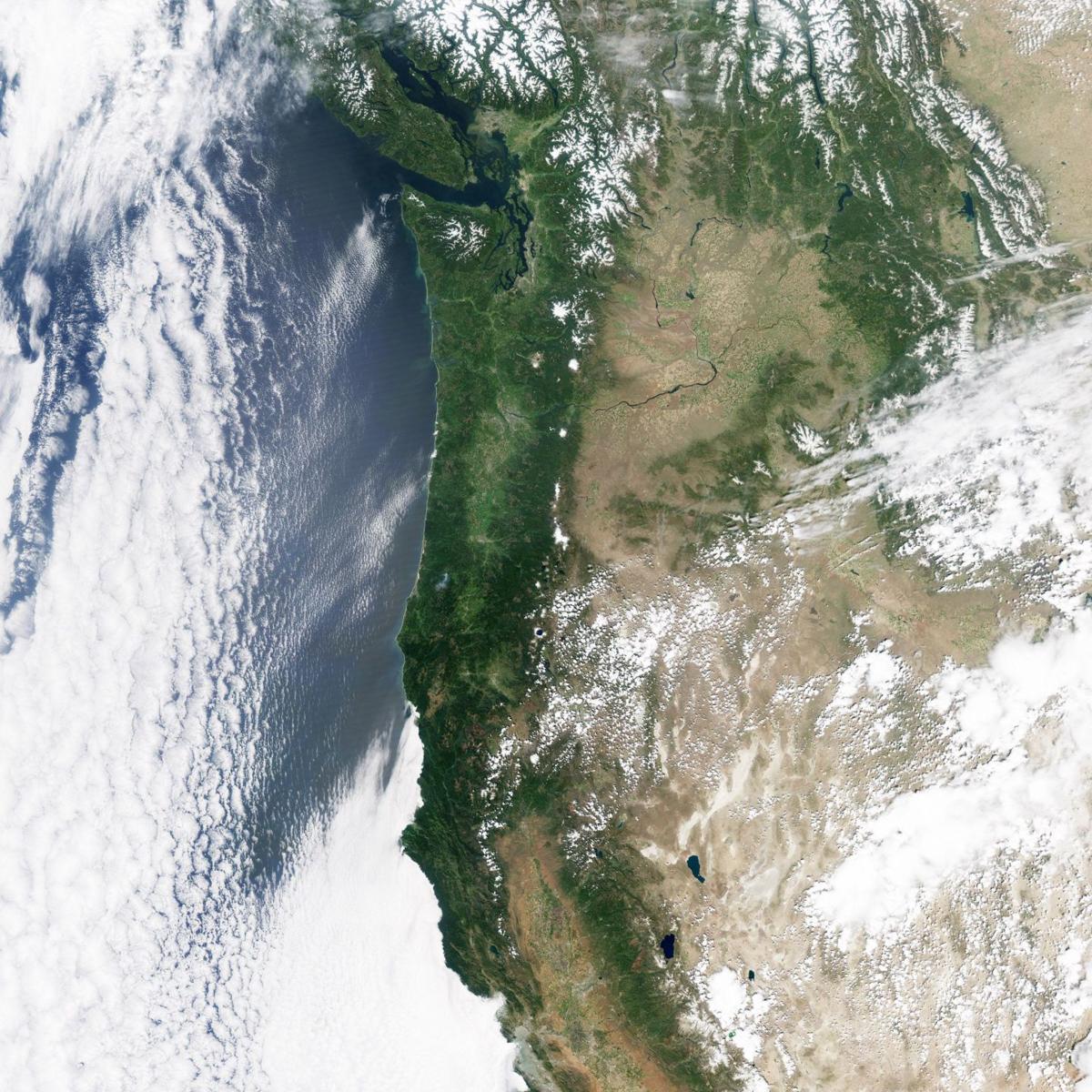 The Moderate Resolution Imaging Spectroradiometer (MODIS) on NASA’s Aqua satellite acquired these natural-color images of Oregon, Washington, and the Cascade and Olympic Mountains. The left image shows the region on May 13, 2014, while the right was acquired on May 3, 2015. Last year was not necessarily good for snowpack, but it was substantially better than 2015. notforsale

The Moderate Resolution Imaging Spectroradiometer on NASA' Aqua satellite acquired these natural-color images of Oregon, Washington and the Cascade and Olympic Mountains. The left image shows the region on May 13, 2014, while the right was acquired on May 3, 2015. Last year was not necessarily good for snowpack, but it was substantially better than 2015.

The Moderate Resolution Imaging Spectroradiometer (MODIS) on NASA’s Aqua satellite acquired these natural-color images of Oregon, Washington, and the Cascade and Olympic Mountains. The left image shows the region on May 13, 2014, while the right was acquired on May 3, 2015. Last year was not necessarily good for snowpack, but it was substantially better than 2015. notforsale

COLUMBIA BASIN — This summer could prove tough for salmon if drought conditions persist or worsen.

Already, some rivers and streams in the Columbia Basin are low, lacking the boost they normally would receive from melting snow high in the mountains. On June 15, the Washington Department of Ecology reported that Washington’s snowpack was at 0 percent of normal, though there is still snow at higher elevations and in glaciers. At this same time last year, snowpack levels were at 105 percent of normal on the Olympic Peninsula and 138 percent of normal in North Puget Sound.

But this winter has been mild and some weeks this spring have not just been warm, they’ve been hot.

Now, federal, state and tribal fishery managers are worried about low-flow conditions in salmon-bearing streams and rivers in the Columbia Basin as spring turns into summer. Such conditions can hamper fish passage, lead to high water temperatures and create a perfect breeding ground for fungal and bacterial infections that latch on to battered fish returning from the ocean to spawn.

While water temperatures have yet to hit extreme levels, already they are above average, said Stuart Ellis, harvest biologist with the Columbia River Inter-Tribal Fish Commission, which represents the Yakama, Warm Springs, Umatilla and Nez Perce tribes.

“They are running a little warm,” said Ellis. “And in some cases, the river and some of the tributaries are already pretty low and quite a bit warmer than normal.”

Warm water alone doesn’t kill fish, but warm water becomes just another stress on salmon already living in a stressful environment. As adult salmon return from the ocean, they face predators like sea lions and fishermen and challenges like the dams, as well as a whole host of other troubles.

“Under normal conditions, these fish are pretty tough,” Ellis said. Hundreds of thousands will return and spawn successfully throughout the Columbia River system, he said.

But, Ellis added, as the fish are hunted and handled, and in increasingly warmer water where there may be less oxygen and more risk of bacterial or fungal infection, those stresses start to pile up.

“As they get closer and closer to the edge any additional stress can put them over.”

In a teleconference June 4, Taylor Dixon of the National Weather Service’s River Forecast Center in Portland, Ore. said recent rains in the area have done little to change a forecast of low river flows in the Columbia Basin between now and September.

In many areas around the basin, overall precipitation was close to average or even better than last year since October 2014, but there was less snowpack overall, an early snowpack melt and then an earlier than normal runoff.

Washington Gov. Jay Inslee declared a statewide drought emergency on May 15, following previous drought declarations March 13 and April 17 after a committee determined that 48 of the state’s 62 watersheds had water supplies of 75 percent normal or below. And, after a slow build-up, El Niño conditions are now evident on the West Coast and likely to persist, according to the Office of the Washington State Climatologist in an update at the end of May. Eastern Washington could see below, normal or above-normal precipitation levels down the road while western Washington also could be in for a hotter, drier summer.

Much of Clatsop and Pacific counties are considered to be abnormally dry or in moderate drought, according to the U.S. Drought Monitor jointly produced by the National Drought Mitigation Center at the University of Nebraska-Lincoln, the U.S. Department of Agriculture and the National Oceanic and Atmosphere Administration.

Meanwhile, the most recent U.S. Seasonal Drought Outlook, produced by the National Weather Service’s Climate Prediction Center, shows that it is highly likely that drought could develop along the Oregon and Washington coasts through August as drought conditions persist elsewhere in the state.

“It’s really all about conditions and there’s just not a lot we can do about it,” said Teresa Scott, drought coordinator with the Washington Department of Fish and Wildlife.

What WDFW can do is keep an eye on places where fish might have trouble swimming through due to low water. In such cases, a crew might go out and move rocks around, creating a deeper passage, or build an artificial or temporary fish ladder, creating rivers and pools throughout a low flow area. But these decisions will always be made on a case-by-case basis, Scott said. In some instances, the water upstream might be too warm and the fish are better off staying put.

Some in-water work could be put on hold, projects like culvert replacement, for instance. When crews replace culverts, they must create a bypass for fish.

“Almost anything they’re going to build is going to be even more stressful for fish,” Scott said.

But that’s this year. Scott, Ellis and fishery managers worry about the next few years.

Juvenile coho, for example, spend nearly a full year in fresh water before heading out to the ocean. This year, they’ll likely be reared in warmer and possibly shallower-than-normal water.

“If those fish hatch out into areas where the streams are simply too low and too warm in the summer, they have to spend all summer trying to survive in streams that are outside their environmental bounds,” Ellis said.

“So many streams were already low early, maybe a couple months ahead of time, warm and low, and there’s juvenile mortality associated with that,” Scott said. These salmon may be less fit when they hit the ocean, she explained, and fewer could return to the hatchery as adults in the coming years.

“But those fish, we won’t know that they’re even missing for two and three and four and five years from now.”