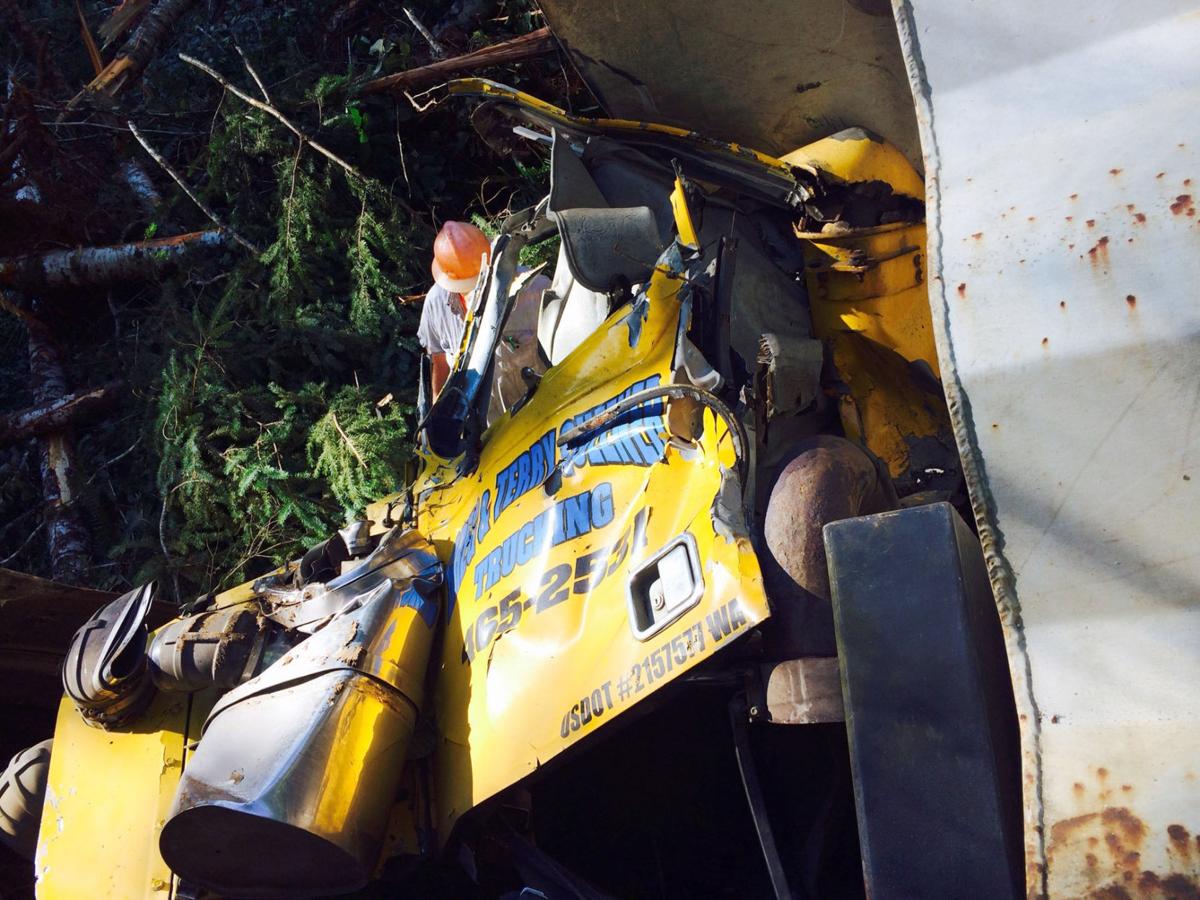 A Rosburg-based dump truck was totaled by vandals in an incident that results in one of the alleged culprits being turned in to authorities by his mother. 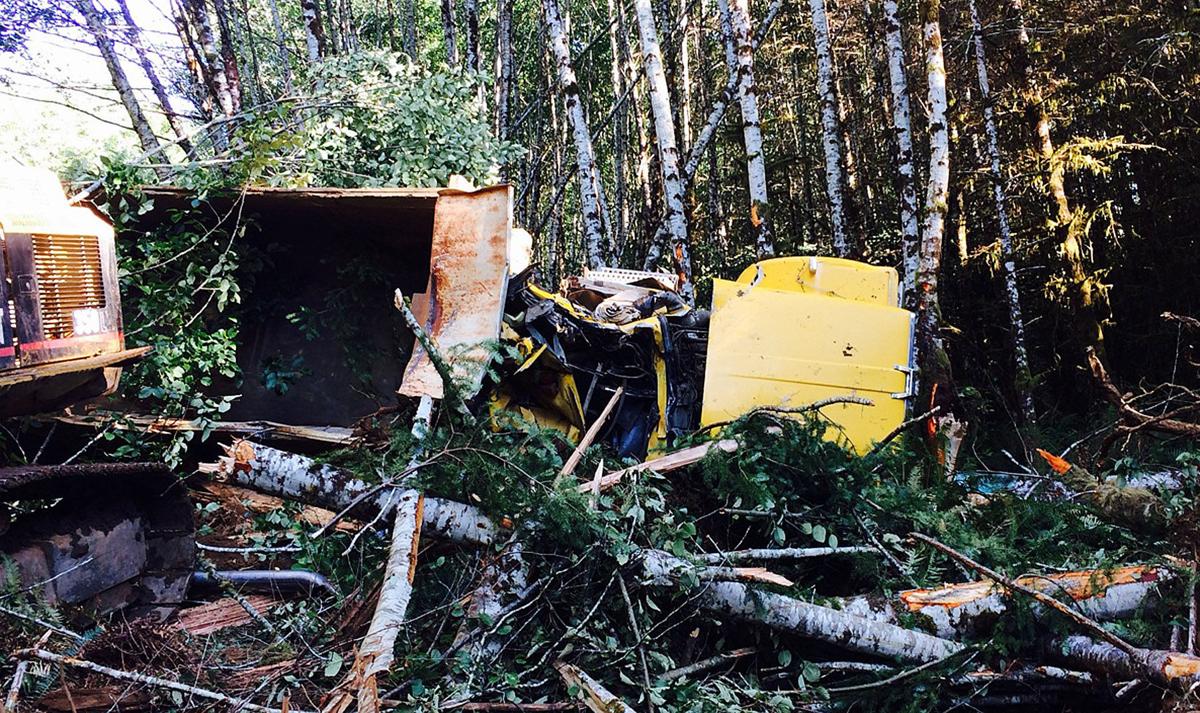 Vandalism resulted in tens of thousands in damage to equipment and trees in north Pacific County.

A Rosburg-based dump truck was totaled by vandals in an incident that results in one of the alleged culprits being turned in to authorities by his mother.

Vandalism resulted in tens of thousands in damage to equipment and trees in north Pacific County.

LEBAM — One local mother wasn’t afraid to exercise a bit of “tough love” when her son and his friend allegedly committed a senseless and costly act of vandalism during the course of a drunken misadventure.

That call helped sheriff’s deputies quickly arrest the two suspects, Tanner Jeffrey Buchanan, 21, of Raymond, and Derrick Thomas Justice, 20, of Pe Ell, who allegedly used a bulldozer and excavator to tear out trees, dig up a road, and completely destroy a dump truck belonging to Rosburg trucker Greg Queener.

On Aug. 18, Pacific County Sheriff’s deputies visited a wooded area on the Trap Creek Main Line logging road, near Lebam in the Willapa River Valley, to investigate a report of a serious vandalism incident at a work site. At the scene, which was behind a locked Weyerhaeuser gate, they discovered that vandals had bashed in the cab of Queener’s bright yellow 1988 Western Star dump truck, then tipped it onto its side, damaging it beyond repair. The equipment had been left there over night, because crews were wrapping up work on a culvert project in a creek. The vandals also left behind piles of torn up earth and scarred and uprooted trees, ruining much of the work that had been done.

On Aug. 20, the Greg and Terry Queener Trucking Company owner said he learned of the damage after his friend and employee, Greg Olsen went to the site.

“He’s more shaken up about it than I am,” Queener said of Olsen, a veteran who jumped in to help him with jobs after Queener started getting more work than he could handle on his own.

At first, Queener figured they’d probably slashed the tires or messed up the truck’s paint-job. But a few minutes later, a dispatcher for the culvert project got in touch too, telling him, “It’s upside down, smashed, pretty much ruined.”

Queener, who works full time on a county road crew, got permission from his boss to leave, and rushed to the site.

Fortunately, no fuel leaked, but Queener said the damage was stunning.

“The whole scene was mind blowing — ‘Holy cow, look at this!’ It was mangled. I actually thought, ‘Who died?’ It looked like a car wreck.”

Another good friend, Robby Ohrberg, who owns a Cathlamet excavation company dropped everything to help him get the 25,000 pound truck out of the woods and haul it to Toledo.

The following day, Aug. 19, a woman, whom PCSO has not identified, called a Sheriff’s Office employee at home and confided that she suspected her son, Tanner Buchanan, had been involved in the incident. A spokesperson for PCSO said that while it was painful for the mother to turn in her own son, she told deputies she knew that she had to do the right thing.

Deputies contacted Buchanan, who admitted that he and another friend caused the damage to the dump truck with an excavator and a bulldozer. Buchanan told the deputies that they had both been drinking alcohol and had trashed the truck “for the fun of it.” Deputies then tracked down the second suspect, Derrick Justice. Justice also admitted to operating the bulldozer, but he denied that he damaged the truck in any way, according to the press release.

Both Buchanan and Justice were arrested on Aug. 19, and booked into the Pacific County Jail on charges of first-degree malicious mischief and second-degree trespassing.

Queener estimates the truck had a value of between $30,000 and $50,000. It was insured, so he’ll get reimbursed for some of that ­— he’s not sure how much yet. But even if the insurance company pays him replacement cost, or the perpetrators eventually give him some compensation, it still won’t cover the real cost of the loss.

Queener had spent thousands to keep the aging rig in good condition, most recently buying a brand-new $12,000 motor. On top of that there’s the insurance premiums and deductible, the full tank of gas, the licensing fees, the missed time at his county job and the inconvenience to his employee, the owners of the destroyed site, and all the customers he can’t help during the busiest time of year.

“I’ve already got many calls for work for the next week, and obviously that’s not gonna happen, so I had to refer it to someone else,” Queener said.

Though he’s losing as much as $900 a day in lost work, he says the most frustrating thing by far is that no amount of money could make up for losing an item that had serious sentimental value.

The truck used to belong to his uncle, Terry Queener, and the two men were very close.

“He was my best friend. He was one of those relatives that you can go to, no matter what,” Queener explained. When his uncle passed away about five years ago, Queener spent most of his own savings to buy the truck from his aunt. Though he’d never planned on owning a trucking company, he says he’s been spending virtually all of his free time either “fixing that damn thing or working on it” ever since.

Despite all the hassle and heartache, Queener said the incident has helped him realize how much his business has grown, and how many loyal friends, family members and customers he has. He estimates that somewhere in the neighborhood of 150 to 200 of people, including many strangers, have shared his story, or called or written to him to express their support.

“My phone has blown up,” Queener said. “I can’t believe that many people care.”

Shortly after the July DUI incident, Buchanan posted a picture of his wrecked vehicle on his public Facebook page with the caption, “Lessons learned and bridges burned.”

“You’re lucky to be alive,” one friend told him.

Buchanan assured her that he’d taken the incident to heart, saying, “My head is now pulled out of my a--.”