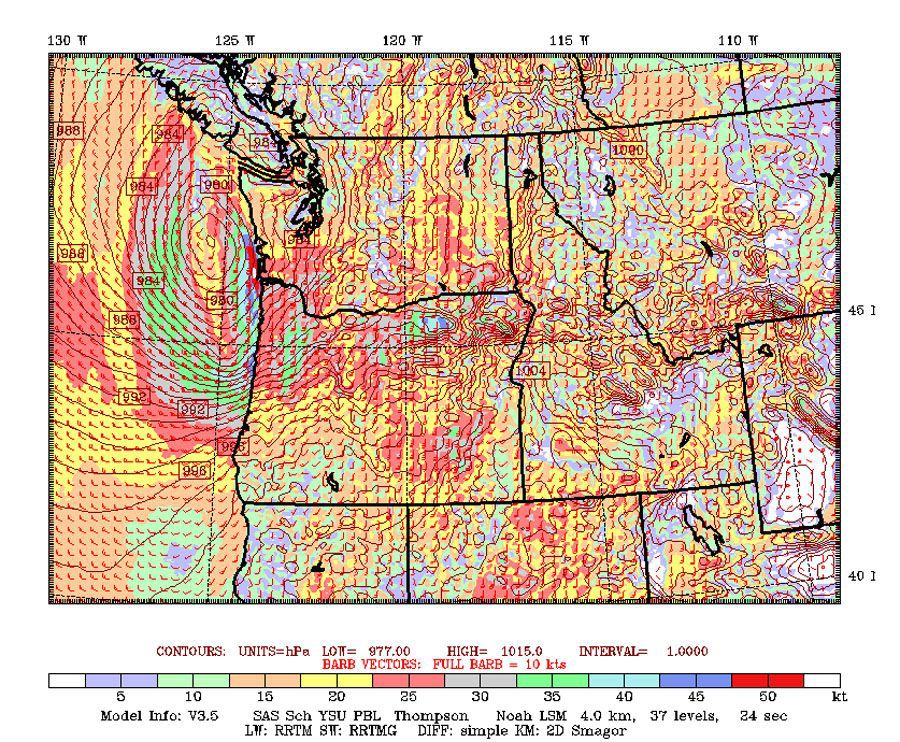 The latest computer-generated weather prediction for 4 p.m. Thursday shows the storm's most powerful front just off the Long Beach Peninsula. “If this thing approached San Francisco, they would probably abandon the city. But we are made of sterner stuff,” University of Washington weatherman Cliff Mass joked. 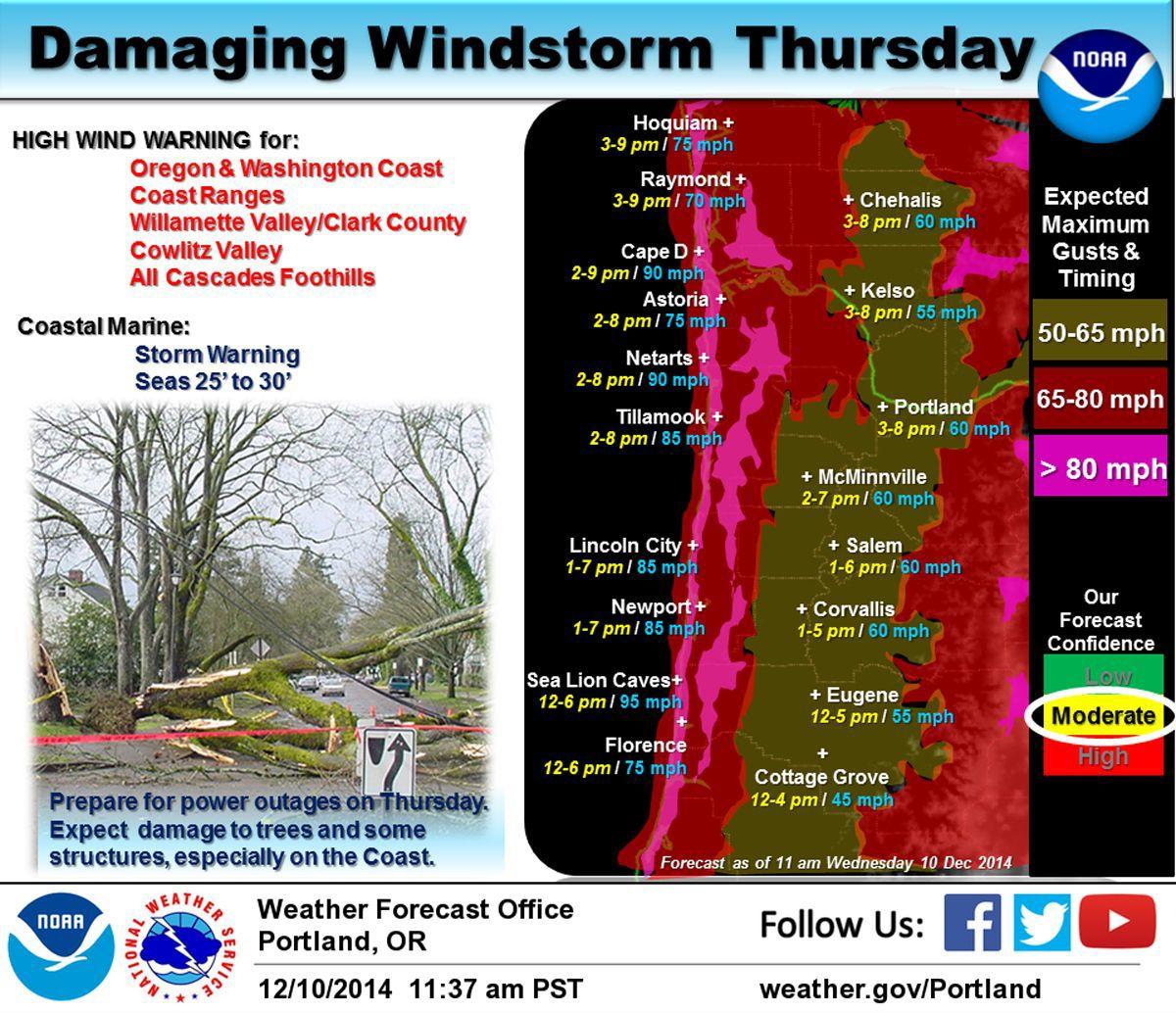 A powerful windstorm will roll up the coast on Thursday, bringing strong, damaging winds to the region. Winds will increase rapidly later Thursday morning into the early afternoon, with south winds gusting 55 to 65 mph across much of the region. Gusts of 80 to 95 mph winds can be expected along the Coast and into the higher ridges of the Coast Range. Winds will gradually subside Thursday evening.

The latest computer-generated weather prediction for 4 p.m. Thursday shows the storm's most powerful front just off the Long Beach Peninsula. “If this thing approached San Francisco, they would probably abandon the city. But we are made of sterner stuff,” University of Washington weatherman Cliff Mass joked.

A powerful windstorm will roll up the coast on Thursday, bringing strong, damaging winds to the region. Winds will increase rapidly later Thursday morning into the early afternoon, with south winds gusting 55 to 65 mph across much of the region. Gusts of 80 to 95 mph winds can be expected along the Coast and into the higher ridges of the Coast Range. Winds will gradually subside Thursday evening.

LONG BEACH — Forecasters now have “substantial confidence” that a North Pacific cyclone is marching up the Oregon coast. It will have a major impact on the Long Beach Peninsula and other areas of Pacific County by late this afternoon.

“There will be a major blow tonight over western Washington that will certainly cause power outages for some of you,” top University of Washington meteorologist Cliff Mass said late Thursday morning. “This event should bring the strongest winds we have seen during the last year, but damage will be mitigated by our leafless trees and the fact that earlier windstorms have done considerable pruning of new growth and weak limbs.”

The Oregon coast will be getting hit hard during the remainder of the day, as the storm tracks northward. “At 4 PM, very strong winds along the Washington coast (gusting to 60-75 mph). Long Beach Peninsula is hit hard,” Mass said.

Though certainly not in the same league as the infamous typhoon in December 2007, the approaching storm is serious enough to have caused Ocean Beach and Naselle-Grays River administrators to cancel school as a precaution Thursday.

The National Weather Service in Portland is still predicting southerly wind gusts of 70 to 75 mph in coastal communities, and 75 to 85 mph over higher Coast Range/Willapa Hills terrain, and beaches and headlands.

Winds will rapidly increase during the early afternoon. The strongest winds are expected during the late afternoon and early evening. It will be the most severe of this week’s series of storms.

Significant property damage may occur resulting in structural damage. Additionally, these winds will result in numerous downed trees and cause power disruptions and travel issues for trucks, trailers and other high-profile vehicles.

In addition, a high-surf advisory remains in effect until 10 p.m. Thursday. Seas offshore will build quickly late this morning and afternoon. The large waves will produce hazardous surf conditions, with breakers expected around 25 feet this afternoon and evening.

Exercise extreme caution along beaches. Unpredictable and destructive waves may wash over beaches, jetties and other structures with no warning.

On Wednesday in north Pacific County, high surf caused a home profiled on the Chinook Observer’s front page last week to fall into the ocean at Washaway Beach.

Thursday’s Shoreline Master Program Visioning meeting has been canceled in Raymond. Interested residents are encouraged to attend next Thursday’s meeting in Ilwaco (Ilwaco Community Building located at 158 First Ave North) to provide comment. Pacific County’s SMP website has recently been updated with all meeting recordings and the latest information pertaining to the update www.co.pacific.wa.us/dcd/SMP%20Update.htm

Due to the high-wind warning issued by the National Weather Service and the anticipated strength of the storm system forecast for Pacific County, the Pacific County Emergency Management Agency has postponed the Community Tsunami Inundation Forums previously scheduled for Thursday. The Community Tsunami Inundation Forums have been re-scheduled for Friday, Jan. 9, from 2 to 4 p.m. at the Chautauqua Lodge, 304 14th Street North, in Long Beach; and 7 to 9 p.m. at Pacific County Fire District #1, 26109 Ridge Avenue in Ocean Park.

Clatsop Community College will close at 3 p.m. Thursday due to the weather warnings.

Be sure to check with organizers before departing for any other events scheduled Thursday.

Every home should have an emergency outage kit that includes the following:

If a power outage occurs, Pacific County PUD customers should first check their fuses and circuit breakers. If the power failure is not caused inside the home or business, customers should report the outage to PUD at 642-3191 during ordinary office hours, or 877-602-6465 after hours (or 877-204-6181 in Naselle, Raymond or South Bend).

To ease the inconvenience of power outages and assist crews in restoring power, PUD suggests the following tips and safety precautions:

• Stay away from all downed power lines and utility lines. Even if the lines are not sparking, they could be energized and extremely dangerous.

• Candles should never be left unattended or used for extended periods. Use a flashlight or other battery-powered lighting source.

• Use a fireplace or wood stove to keep warm. Pay careful attention to fire hazards.

• Never use kerosene or propane heaters inside without proper ventilation. They create dangerous fumes. Also, don’t use charcoal in your house or garage.

• Never use a barbecue grill indoors. Cook over sterno cans.

• Turn on your porch light switch. After crews complete repairs, they patrol the area of the power failure to see if lights are on.

• As much as possible, do not open refrigerators and freezers — they will keep food and perishables inside cold for some time if not opened.

• Preserve body heat by wearing multiple layers of clothing. Add a hat and blanket to stay warm. Blankets and towels around windows and doors help keep the heat in.

• Check on your neighbors, especially those who may need special assistance. Also, check with others who have electricity, to see if you can visit.

• Protect your pipes during freezing weather by wrapping them with insulation. Also, leave faucets dripping so water won’t freeze and crack the pipes.

• Generators should be outside or in a well ventilated unoccupied space.

• Make sure generators are properly wired for your home or business, and don’t connect a generator directly to your home’s main fuse box or circuit panel. This can create a dangerous back feed hazard for line crews.