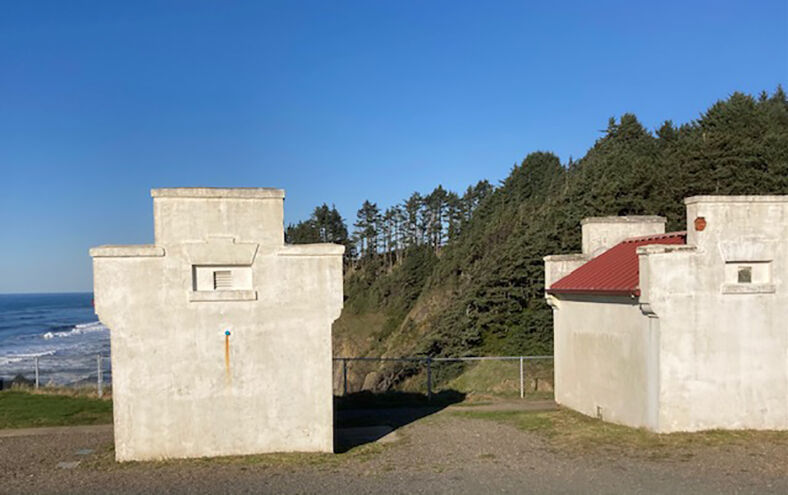 Oil houses once used to store supplies at North Head Lighthouse will undergo a facelift. 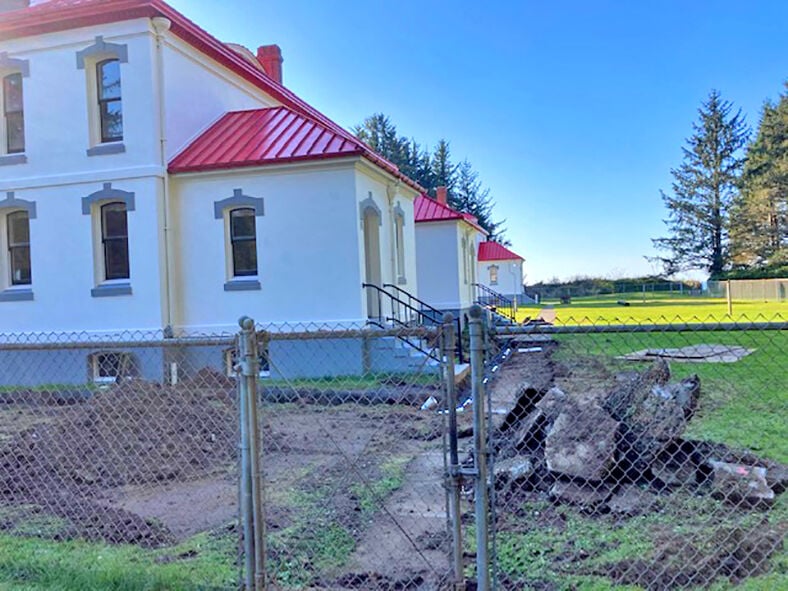 Construction has begun at the Lighthouse Keepers’ grounds.

North Head Lighthouse — totally restored last year — will next have its two support buildings renovated. They once held kerosene and other supplies used to operate and maintain the light. One of them is outside this photo to the right.

ILWACO — The North Head Lighthouse complex at Cape Disappointment State Park is set for even more work this year as a top-to-bottom restoration continues at one of the state’s most-popular tourist attractions.

Washington State Parks is installing new interpretive plaques, and working on the grounds of the North Head Lighthouse Keeper’s House and Assistant Keeper’s House. Digging at the keepers’ houses has already started. Taking measurements for restoration of two oil houses next to the lighthouse commences this week.

Renovations in and near these houses, which was awarded to Battle Ground-based 4K Construction, include underground drainage improvements. This necessitates removing and replacing old concrete sidewalks. Workers will also remove an unattractive chain-link fence surrounding the houses. Interpretive panels will be added with information about the life of the lighthouse keeper, and about architect Carl Leick, who designed the lighthouse and nearby buildings.

This latest phase of restoration and interpretation began Oct. 26 and will cost $140,425. State Parks estimates it will be substantially complete by Jan. 28, 2021.

Currently colonized by nesting birds, the oil houses are the small stone and brick structures just inland from the lighthouse. These structures, which used to store oil and general supplies, were original to the 1898 complex. Shipments of kerosene to light the way for mariners came in every three months, McMurry said.

The foundations and exterior will undergo repair and replacement. Stones on the exterior will be replaced, bricks will have stucco removed and be repaired as needed, and stone foundations will be given new faces. One will be turned into a restroom for volunteers, which allows for elimination of a Porta-potty. Construction by Tigard-based Pioneer Waterproofing is supposed to be completed by June 30, 2021, at a cost of $1,017,000. Pioneer also was in charge of lighthouse restoration, which concluded last year to much popular acclaim.

Additionally, around March of next year work will begin on other buildings near the keepers’ houses, uphill from the lighthouse and oil houses. To the right of the trail heading out to the lighthouse are two garages, and a carriage house that is now a museum and gift shop. On the bigger of the two garages, rollup doors will be replaced “to replicate the historic era doors,” said Brian Yearout, who is overseeing these projects. Work on the carriage house will bring it into line with Americans with Disabilities Act accessibility requirements.

There are several projects at Cape Disappointment that State Parks has recommended for inclusion in the governor’s next biennial budget request. But work on these projects in the upcoming biennium (July 1, 2021-June 30 2023) will mostly be limited to engineering and design, to prepare for later construction. Gov. Jay Inslee is required to present his budget request for the 2021-23 biennium this December.

One of the agency’s requests is for a beach stabilization project. In the 2021-23 biennium, Parks would work with the U.S. Army Corps of Engineers on a plan to shore up Benson Beach against ongoing erosion. The plan would be to do the construction during the 2023-25 budget period.

Another priority is the Isthmus Plan to redevelop the entrance to the campground. The plan is to construct a new visitor welcome center and trail connections nearby and, in a separate project, to repair a culvert under the campground entrance road.

The Isthmus plan is “a statewide priority for the agency and is near the top of our list in our most recent capital budget request,” said State Parks spokesperson Anna Gill.

As with the beach stabilization proposal, these projects would be designed and engineered on the 2021-23 budget, with construction to follow in the subsequent budget. State Parks also wants to reconstruct four restrooms at the park, two during 2021-23 and two during 2023-25.