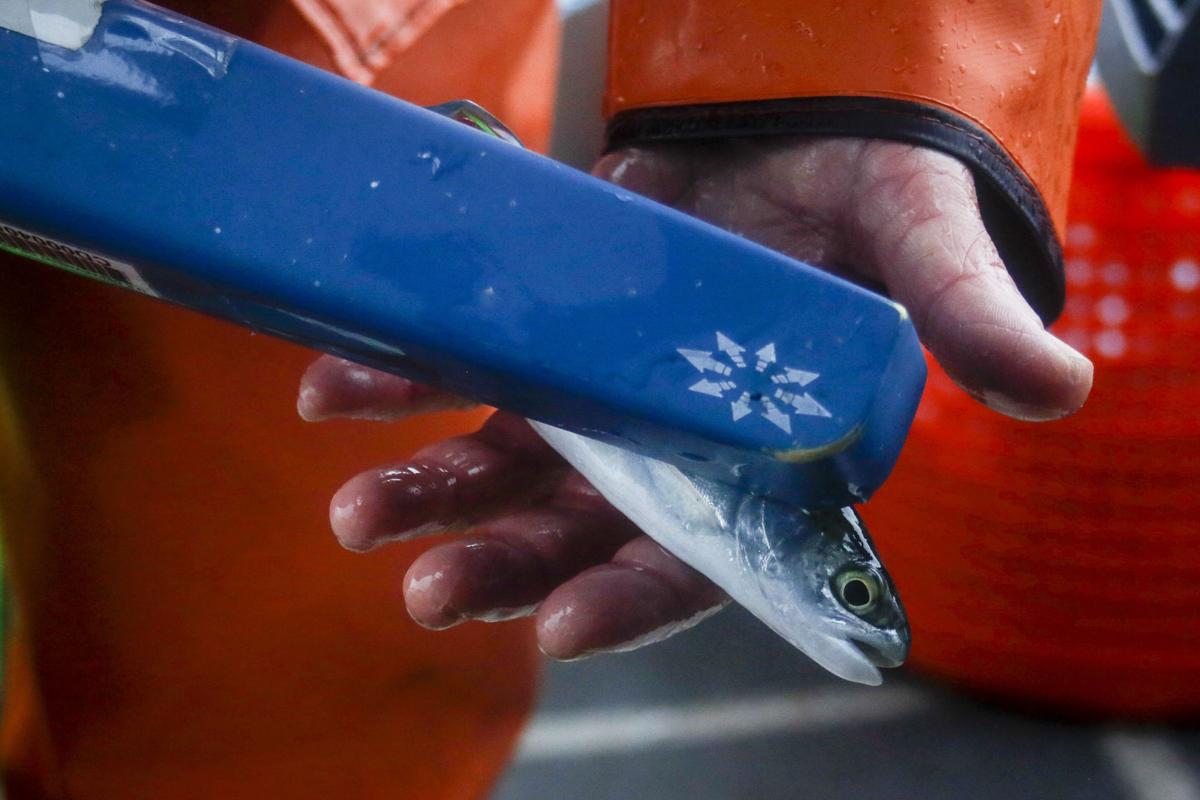 Laurie Weitkamp, a biologist with the National Oceanic and Atmospheric Administration, checks a juvenile steelhead caught in the Columbia River near Cathlamet for a tag. 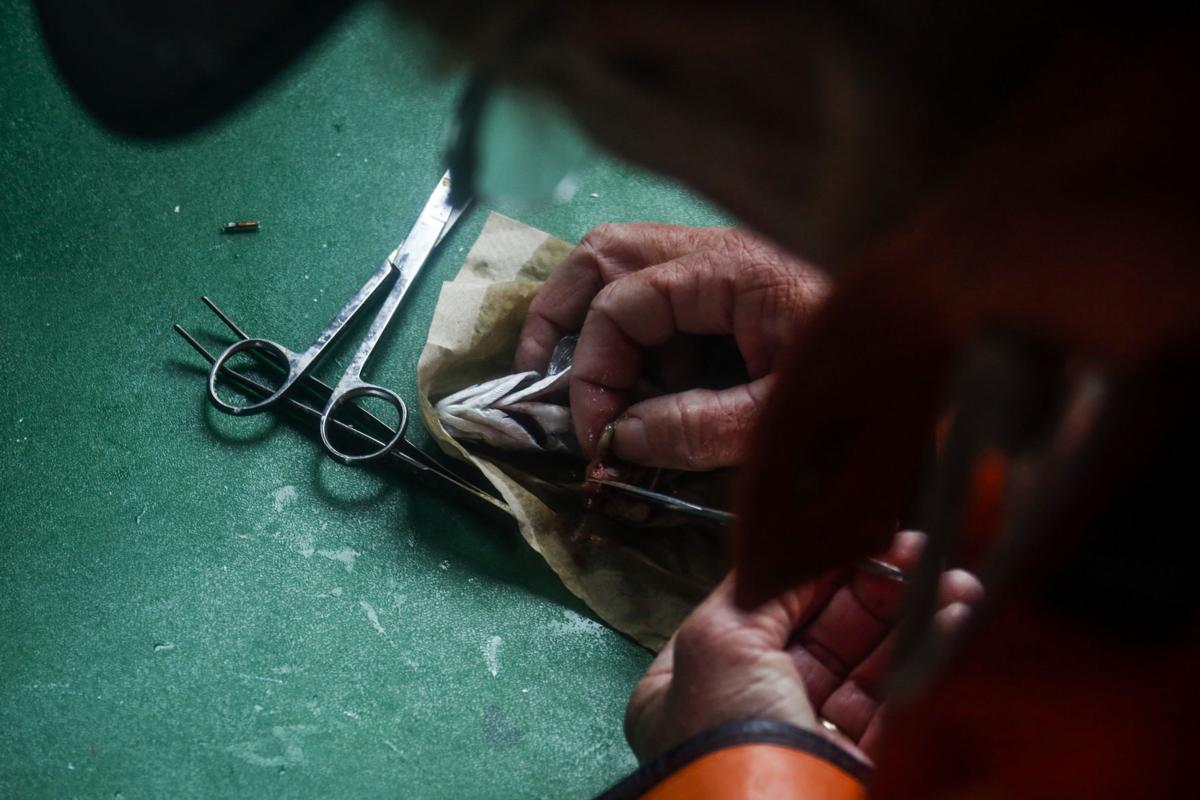 NOAA biologist Laurie Weitkamp extracts the liver from a juvenile steelhead. The liver was then frozen and packed to be sent to a lab for testing. 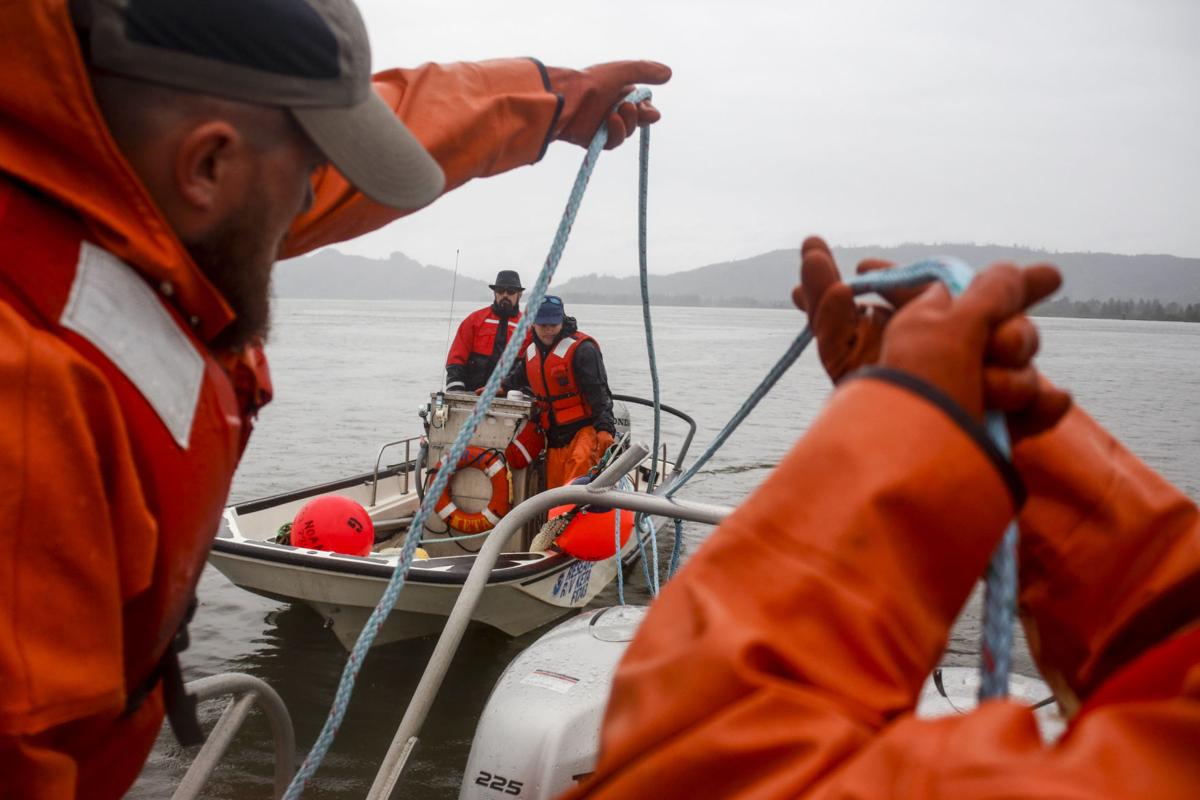 Crews prepare a trawling net on the Columbia River near Cathlamet. 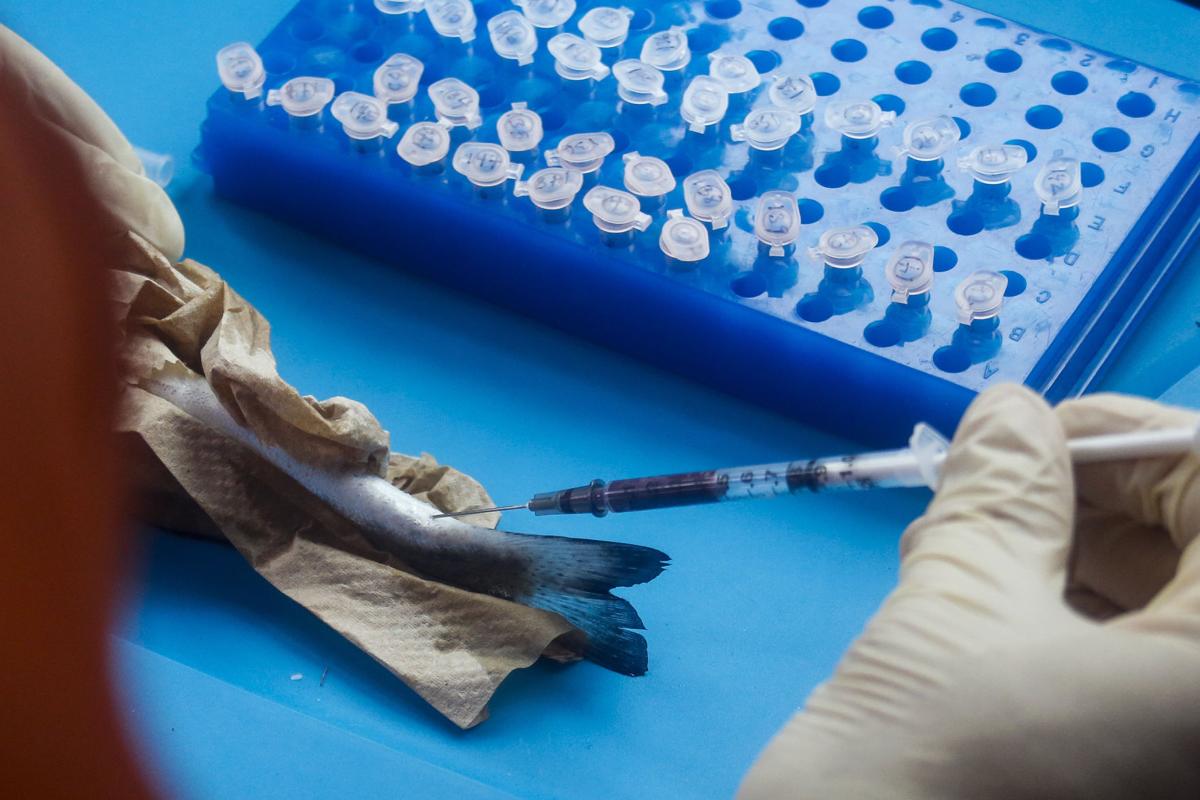 Lance Renoux, a wildlife biologist from Ocean Associates, takes a blood sample from one of the juvenile fish. 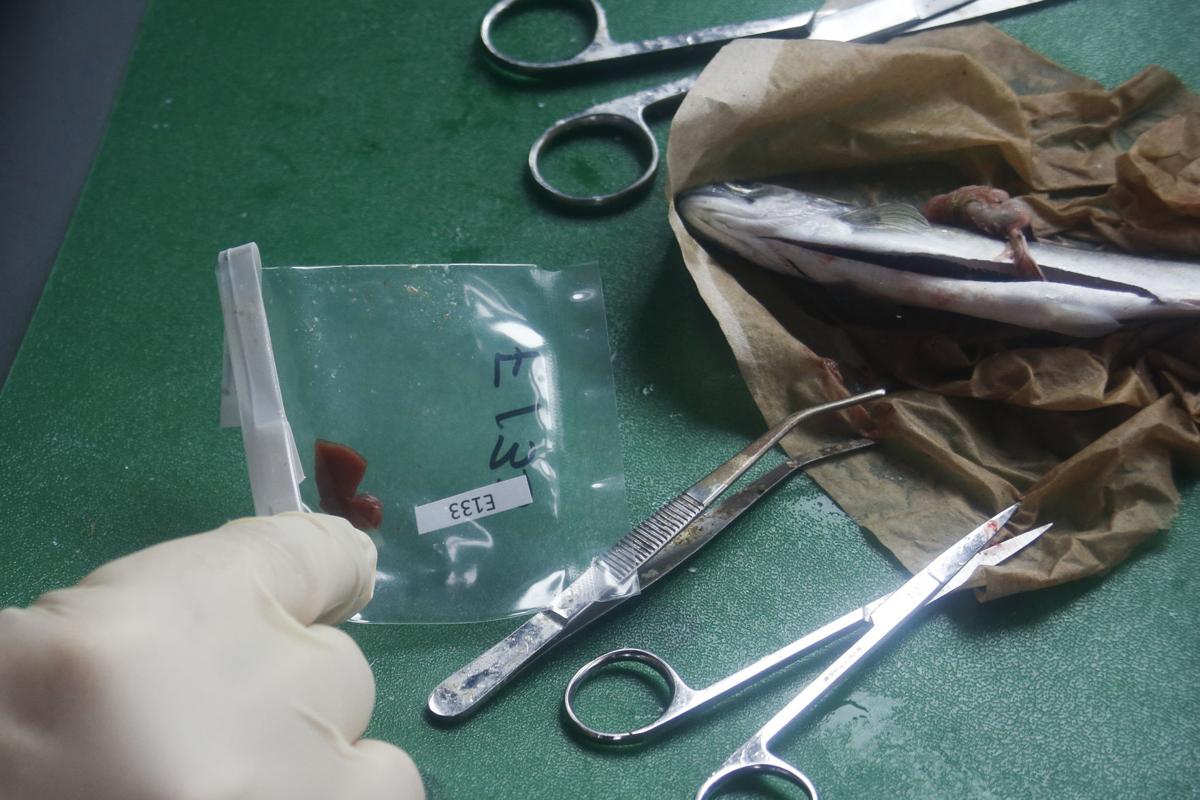 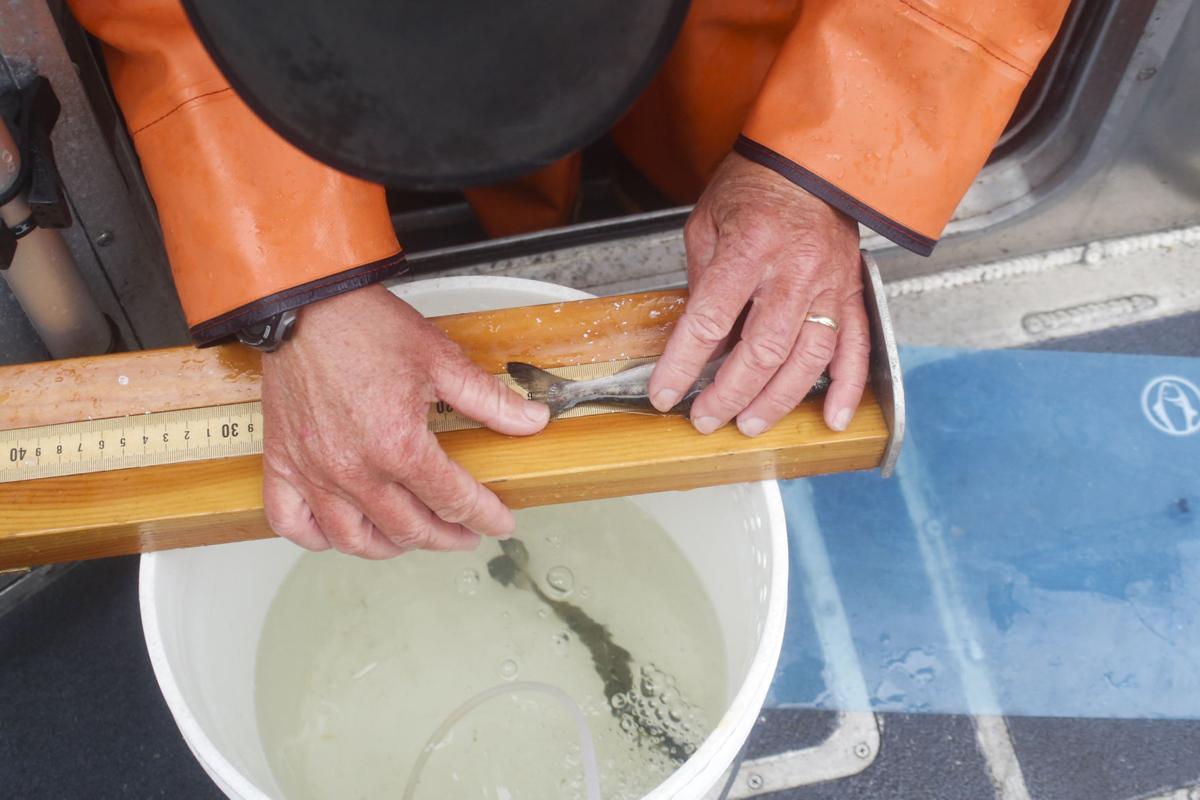 Laurie Weitkamp, a biologist with NOAA, measures the length of a juvenile Chinook.

Laurie Weitkamp, a biologist with the National Oceanic and Atmospheric Administration, checks a juvenile steelhead caught in the Columbia River near Cathlamet for a tag.

NOAA biologist Laurie Weitkamp extracts the liver from a juvenile steelhead. The liver was then frozen and packed to be sent to a lab for testing.

Crews prepare a trawling net on the Columbia River near Cathlamet.

Lance Renoux, a wildlife biologist from Ocean Associates, takes a blood sample from one of the juvenile fish.

Laurie Weitkamp, a biologist with NOAA, measures the length of a juvenile Chinook.

CATHLAMET — The U.S. Army Corps of Engineers wants to know how wetland restoration efforts are benefiting juvenile salmon as they feed in the mouth of the Columbia River on their way to the Pacific Ocean.

Trying to answer that question are multiple field teams working under the National Oceanic and Atmospheric Administration and the U.S. Department of Energy’s Pacific Northwest National Laboratory.

“I think, in part, we’re spending a lot of money on restoring wetlands, and there’s some controversy in that, because it’s not cheap,” said Kurt Fresh, the principal investigator in the migration study and head of the estuarine and ocean ecology program in the National Marine Fisheries Science Center, part of NOAA. “And there’s a question of how effective all this work is. Are we getting the benefits people think we are?”

Fisheries biologist Laurie Weitkamp leads one of Fresh’s field teams that catch, dissect and preserve migrating juvenile salmon on the main channel of the Columbia. The samples they collect tell researchers how the fish indirectly benefit from wetlands they pass by.

On a misty morning Friday, Weitkamp and her contracted research and boat crew from Ocean Associates Inc., headed out of Elochoman Slough Marina in Cathlamet in the research vessel Tyee, followed by a smaller skiff. Together, the vessels trawled for several minutes in the main channel of the Columbia next to the Julia Butler Hansen National Wildlife Refuge, and near a recently restored wetland at Steamboat Slough.

The crew, less than two weeks into a study that runs through July, got their trawl net tangled up, but still returned to port with a modest catch: a single hatchery yearling Chinook, and a wild steelhead trout.

“In three days of sampling here, we’re trying to get 50 fish of each yearling Chinook and steelhead,” Weitkamp said. “The idea is that some of the fish we’re catching are not stocks we’re interested in, and so we need to get enough so we have a big enough sample size of the stocks we are interested in — the Snake River and mid- upper-Columbia Chinook … and the Columbia steelhead as well.”

The juvenile salmon and steelhead caught in Weitkamp’s nets could be some of the same counted by a separate NOAA survival study upriver as the fish swim through an antenna array affixed to an open-ended trawl net.

Docked back in Cathlamet, the crew started untangling the net, while Weitkamp and Lance Renoux, a wildlife biologist from Ocean Associates, processed the catch.

Renoux snatched the fish from the bucket and submerged them in a liquid anesthetic before measuring and taking blood samples. As he removed his needle and placed the sample in a small plastic test tube, Renoux passed each fish on to Weitkamp, who quickly sliced open the guts and removed the Red Hots-sized livers, crushing and flash-freezing them between metal blocks supercooled in dry ice. Meanwhile, Renoux hooked up a small, portable centrifuge to spin the blood samples.

“We have to bleed immediately, and we have to take the livers within 10 minutes,” Weitkamp said of the quick progression from flopping yearling in a bucket of water to a dissected corpse on ice.

Back at the Point Adams Research Station, researchers remove more parts of the salmon, including the stomach, intestines, ear bones, gills and a fin clip, before sending the specimens to various National Marine Fisheries Science Center labs from Newport to Seattle.

With juvenile yearling salmon spending only a week in the estuary on their way out to sea, Weitkamp said researchers need quick indicators of growth related to time spent in the estuary, such as the animals’ diets and nutrients gleaned from nearby food sources.

Fresh said NOAA has another researcher looking at what sort of organic matter flows from wetlands into the channel, with the overarching goal of finding linkages between migrating yearlings and wetlands.

Weitkamp’s crew finished their first round of sampling April 29. In a few weeks, they’ll begin a new two-week field process, trawling for salmon and steelhead along the Columbia near Rooster Rock in the Columbia River Gorge, Longview, Cathlamet and just downriver from the Astoria Bridge. They’ll keep sampling into the summer, when the yearlings all reach the ocean and the focus shifts to subyearling fall Chinook from the Snake River that can spend weeks to months in the estuary.

NOAA’s and the Pacific Northwest National Laboratory’s studies are joined at the hip and paid for by the Corps. While NOAA focuses on the indirect benefits of wetlands to salmon and steelhead swimming by, Fresh said, the Department of Energy’s laboratory sends researchers into wetlands nearby to see how the migrants interact with the restored areas while in them.

After two years of fieldwork, researchers will synthesize the collected data and turn it into a final report to the Corps.

“The goal is to try to draw some inferences of how these wetlands are benefiting the salmon,” Fresh said, adding the results, if definitive enough, could lead to changes in how and where wetlands are restored.