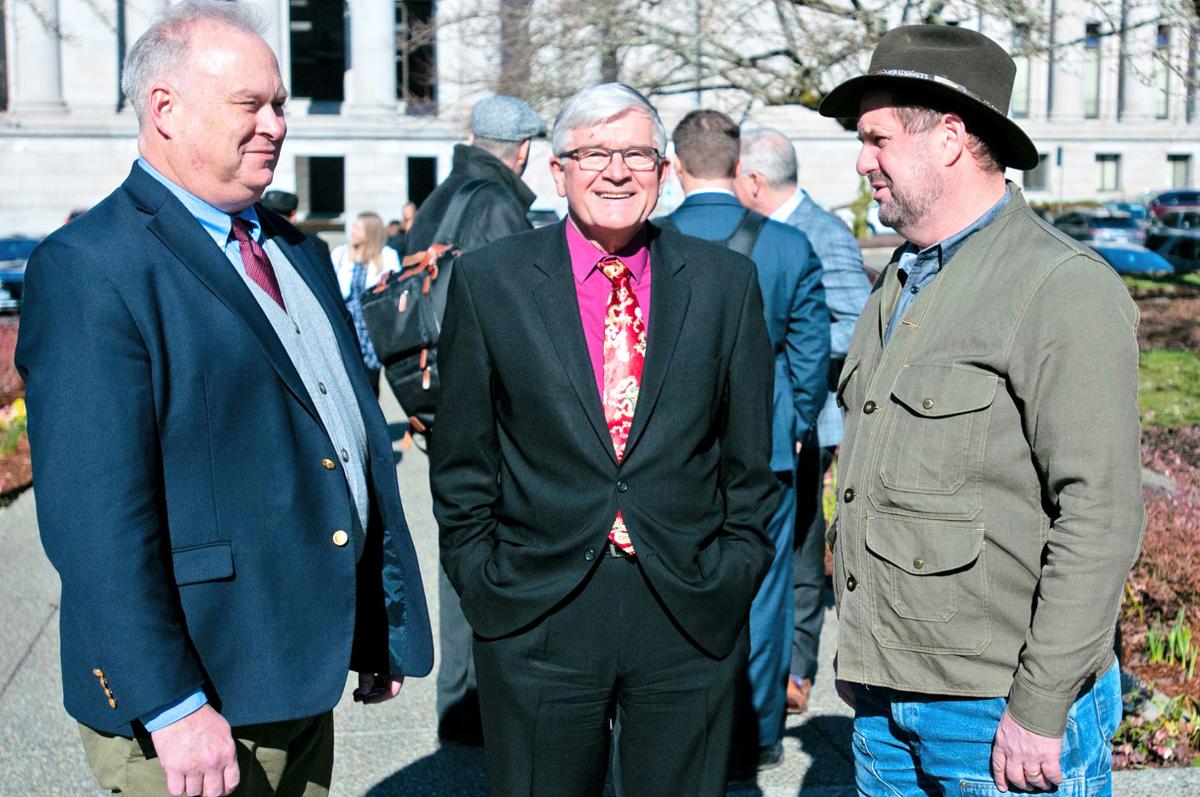 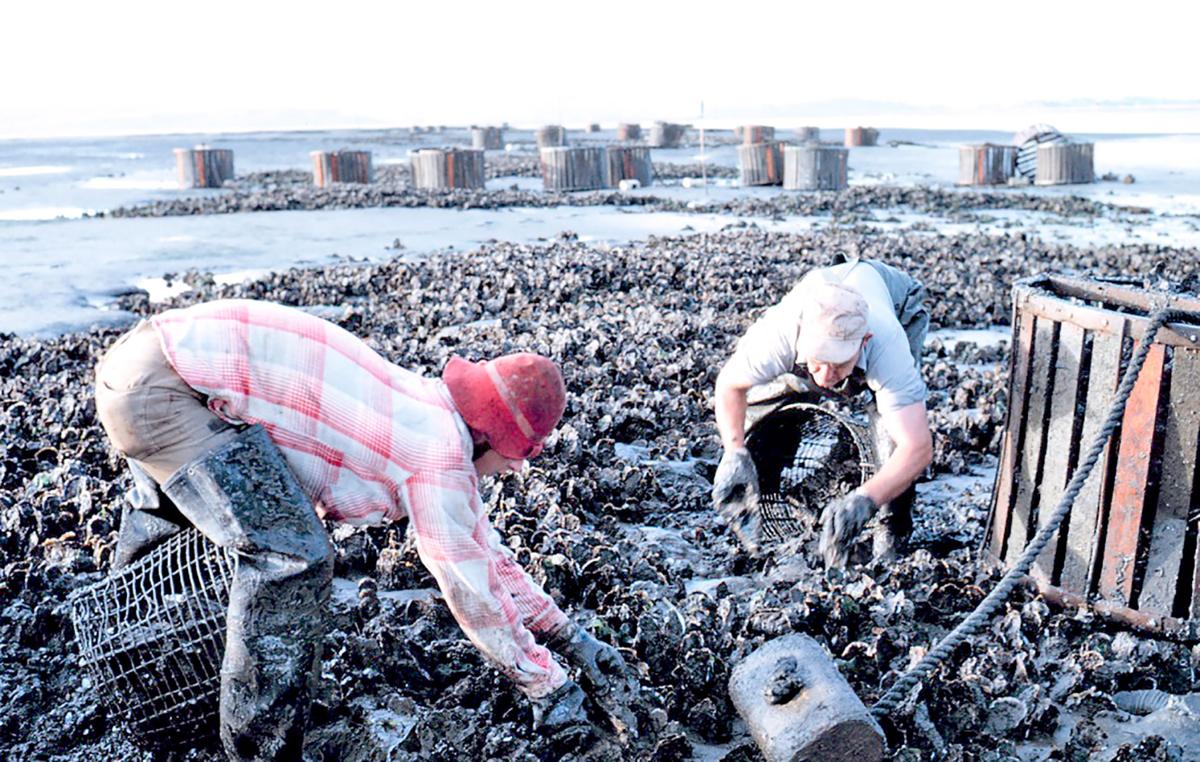 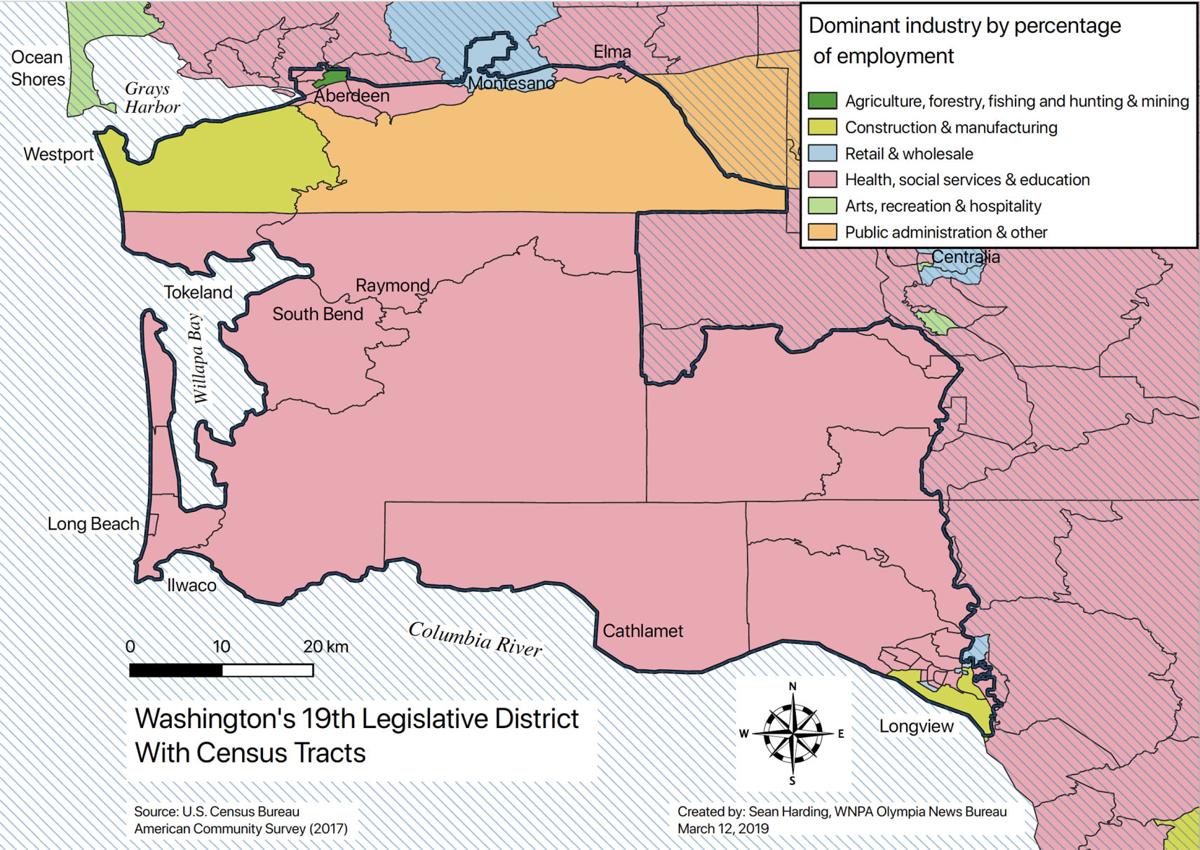 “They don’t give a damn about Republican versus Democrat, said Rep. Jim Walsh, a Republican from Aberdeen. “They want people who will represent them.”

Walsh was first elected to the Washington House of Representatives in 2016 and is only the third Republican to represent the 19th District since the 1940s.

“It’s a working-class district,” said Rep. Brian Blake, an Aberdeen Democrat who shares the seat with Walsh. “An economy highly dependent on natural resources, whether it be the seafood industry, the timber industry. And the agricultural industry. Cranberries are a big deal. Shellfish are a big deal.”

“We’ve got a couple of the larger seafood ports in the entire nation in Ilwaco and Westport,” Blake added.

“They’re generally kind of frustrated that people outside of Southwest Washington are influencing policies that have a great impact on them, without really understanding the issues that we deal with down there,” he said.

The district is also split in the U.S. House of Representatives. Rep. Jamie Herrera Beutler, a Republican, and Congressman Derek Kilmer, a Democrat, both represent portions of the 19th in the U.S. Congress.

The 19th Legislative District reaches the western half of the Capitol State Forest and is bounded by U.S. Highway 12 in the north, covering Aberdeen and Montesano and extending to Washington’s Pacific Coast south to the Columbia River.

Of the 19th District’s estimated 50,000 workers 16 and over, about 9,000 are government employees, 200 of whom are in the armed forces, according to 2017 estimates from the American Community Survey.

Around 14 percent work in manufacturing, 12 percent are in retail, a quarter in education and social services, and 4 percent work in outdoor industries such as agriculture, fishing and mining. The median family income is around $56,000, about $24,000 less than Washington state’s average.

One of Takko’s biggest priorities right now is helping his oyster farmers “survive.” Willapa Bay, the self-proclaimed “Oyster Capital of the World,” is located in the southwest corner of the district, just north of where the Columbia River feeds into the Pacific. Because of conflicting guidance coming from the state government, their future is uncertain.

Last year, the Department of Ecology denied the Willapa-Grays Harbor Oyster Growers Association a permit to use the pesticide imidacloprid to protect their shellfish against ghost shrimp. Ghost shrimp, whose population has exploded in the last half-century, burrow themselves into the mud where the oysters lay, making it soft which causes the oysters to sink in and suffocate. Most people do not want to eat the shrimp.

In 2013, the U.S. Environmental Protection Agency approved imidacloprid as a new way to manage the shrimp after they were forced to phase out another chemical, carbaryl, which had been used to control the shrimp’s population for more than 50 years.

This year, Takko co-authored a bill with Blake that would force the department to authorize imidacloprid during the 2019 season and transfer the regulation of pesticides used for the cultivation of shellfish to the Department of Agriculture. Walsh is a secondary sponsor on the House version of the bill.

The bill contains an emergency clause and would take effect immediately. However, the future of the bill is uncertain as it has not been put up for a vote yet in either chamber.

“Every district in the state wants to see their communities thrive,” said Blake. “Their children do well. Their children being able to come back to the community and have an economic future.”

“You want folks to contribute outside the district,” he added. “But you also want folks that choose to stay there. To have a chance, economically, to thrive.”

Jobs are Blake’s biggest legislative priority, but they aren’t his only one.

“Individual freedom is kind of personal theme of mine,” Blake said.

Every two years since 2011, Blake introduced a bill into the Legislature to remove the state requirement to wear a helmet while riding a motorcycle. This year, he’s introduced legislation that would legalize homegrown recreational marijuana; a law that would prohibit employer searches of employee vehicles; and an initiative to increase state employees’ access to peer-reviewed journals.

However, Blake isn’t the only representative advancing the interests of the district. Although Reps. Walsh and Blake caucus separately, they have their names together on numerous bills that have been introduced into the Legislature this year.

This year, Blake and Walsh co-sponsored laws that increase commercial fishing opportunities; increase the amount of money appropriated for county and city public defenders; ease access to medical marijuana; as well as a bill that would designate the Pacific razor clam as Washington’s official state clam.

“On many issues, my seatmates and I are close,” Walsh said. Although, “I think my approach is a little more aggressive than theirs.”

Walsh, who seems to relish being dramatic occasionally, wore a yellow vest on the House floor before Gov. Jay Inslee’s State of the State address in January to protest Gov. Jay Inslee’s proposed carbon tax. The gesture was a nod to the yellow vest protests that were happening in France at the time. House leadership eventually asked him to remove it.

In 2017 while debating a bill concerning theatrical wrestling, Walsh challenged another lawmaker to a steel cage match on the stairs of the Temple of Justice to demonstrate his party’s support for a bill that would loosen “regulatory burdens.”

“I think the ability of their party to build consensus policy that’s good for the people of our district is shrinking,” Walsh said. “And that’s why, I think, I got elected.”

“In my district, you don’t have the blue collar labor guys like you did way back 30 to 40 years” ago, Takko said. “And that probably leads to some of the frustration of why we’re a split district now. I shouldn’t say it, but I will: the perception that the liberal Democrats in Seattle have done it to us.”

Walsh said his constituents are unhappy about Initiative 1639, which won nearly 60 percent of votes statewide last year, but only a minority of the votes in each county that the 19th District covers.

I-1639 restricts semiautomatic rifle sales to people 21-and-over. It also requires training and increases the waiting time required for purchasing those “assault rifles.” Furthermore, owners are subject to criminal liability if a weapon is improperly secured and a child or other unlicensed users brandish or discharge it.

Walsh added that his constituents are not pleased with some of the Governor’s tax proposals, such as the carbon tax and a capital gains tax that would collect revenue from the sale of a small business.

“The classic model for a commercial fisherman or farmer is: you work your working life and you build assets in the business,” he said.

“You make an okay living as a commercial fisherman … and at the end of your working life, you have this boat that you’ve paid off. And you sell your boat to a young guy, or a gal, and you get a nice chunk of money. Those boats these days, are $200,000 to $300,000. And that would kind of be your nest egg for your retirement. And I think they get that this capital gains tax would put a dent in that retirement plan.”

Some conservative politicians argue that a capital gains tax is a political maneuver around an income tax, which Washington voters also voted against last year.

“I don’t think we can have an income tax,” Takko said. “It’s going to go to the courts.”

Takko believes that Washington’s tax system is regressive, but says a capital gains tax wouldn’t be an ideal way to fix it.

“If we’re going to base a four-year budget on a capital gains and we don’t know for several years whether that’s even legal, how do you hook that into a budget and rely on it?” he said. “I think it’s too squishy money to be building a budget on.”

Back in the House, not only do Blake and Walsh write bills together, they work in the same committee. Walsh serves on the Rural Development, Agriculture, & Natural Resources Committee, which Blake chairs.

Blake is the longest-serving member of the delegation. First elected to the Legislature in 2002, he became a lawmaker after a years-long process that began when he contacted his lawmakers over frustrations with the “Elk Creek controversy.” His actions lead to the reversal of what is now known as the Elk River Natural Resources Conservation Area’s designation as only suitable for science and education use.

Now, hunting and fishing are legal uses of the land under the law. Five years later, voters elected him to the Washington House of Representatives.

“It was quite a process, and I pinched myself,” Blake said.

“I’ve known Blake for years,” Takko said. “Great friend. We’ve hunted together. He and I think quite a bit alike. So if you like me, you’d have to like him.”

Takko was elected as a state representative in 2004 before being elected to the Senate in 2015.

Walsh, who is known in Olympia for being loud and outspoken, finds joy in empowering others to speak their mind

“And that’s the best thing about what I do. Giving them the confidence to say what they’ve always thought and be true to their convictions. And that is hugely important to me. That’s how you change things for the better,” he said.