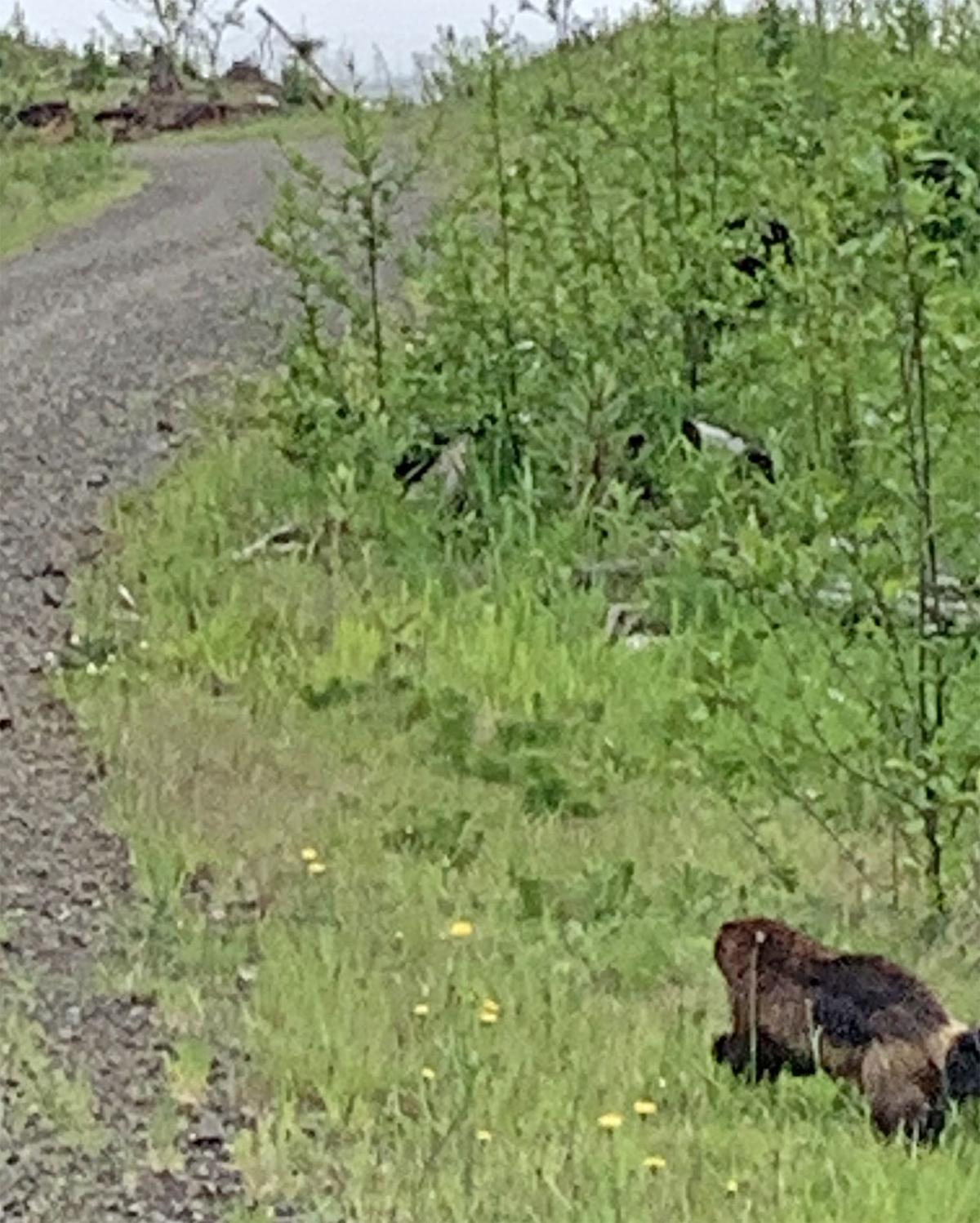 A wolverine, perhaps the same individual photographed on the Long Beach Peninsula seashore, ran along a logging road near Naselle on May 20. 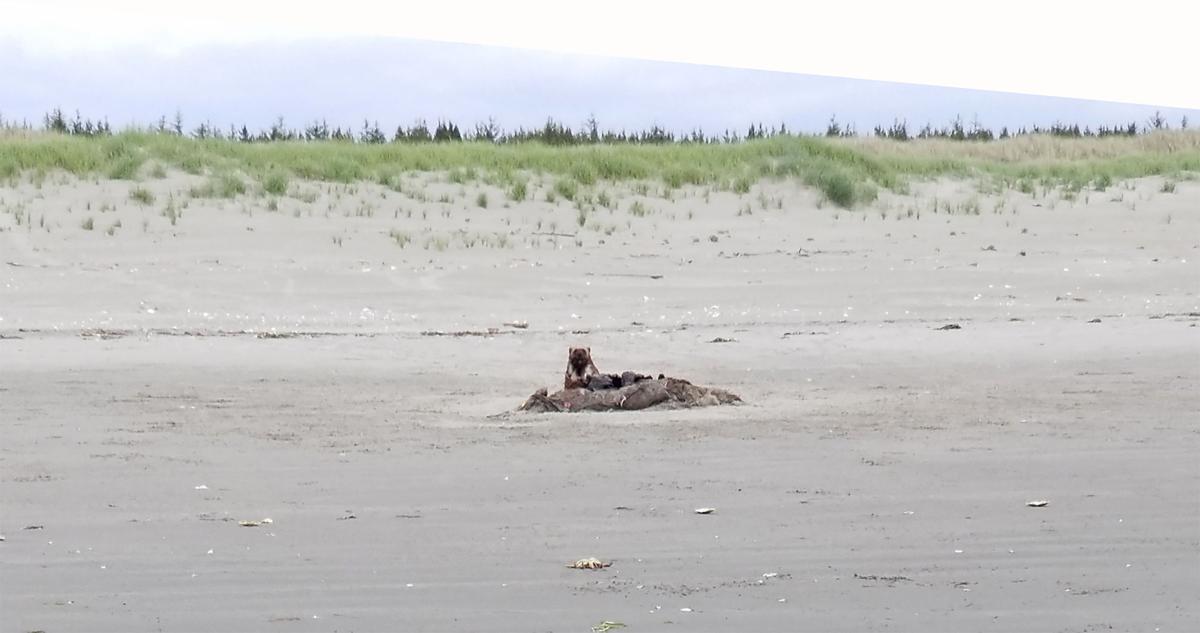 An animal identified as a wolverine by Washington Department of Fish and Wildlife biologists was photographed scavenging a marine mammal carcass on the ocean shore near Surfside on May 23. 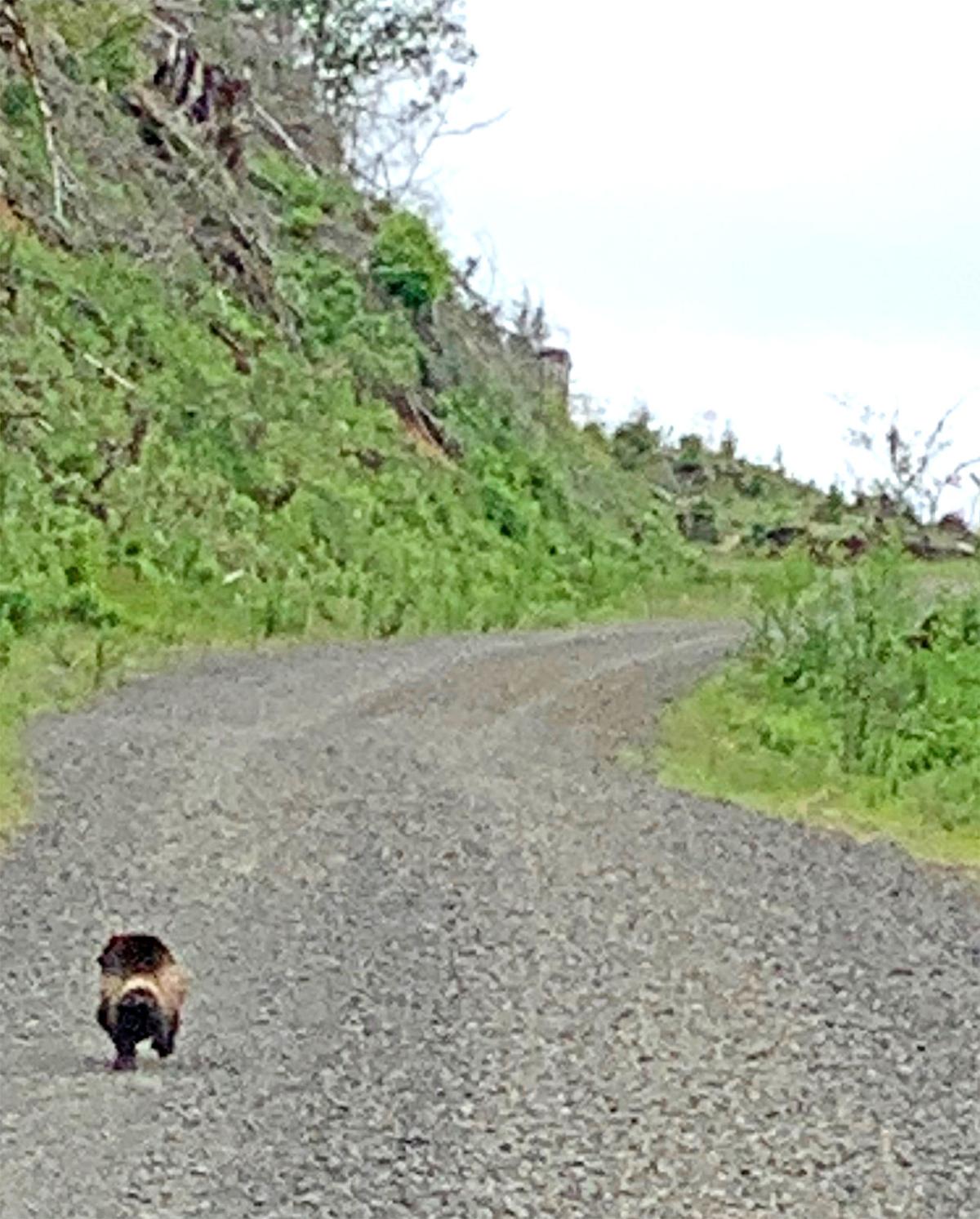 A wolverine runs along a logging road in the Naselle area.

An animal identified as a wolverine by Washington Department of Fish and Wildlife biologists was photographed scavenging a marine mammal carcass on the ocean shore near Surfside on May 23.

LONG BEACH PENINSULA — One of the Pacific Northwest’s most secretive and seldom-seen animals escaped to the beach during the Memorial Day weekend.

A wolverine was photographed in south Pacific County last week at two locations separated by dozens of miles. Numbering only about 300 in the lower 48 states with fewer than 50 in Washington, these bear-like members of the weasel family are legendary fighters with what a state biologist on May 26 called a “tough as nails” attitude.

To catch even a glimpse of one is a once-in-a-lifetime chance that few can hope to experience.

“On the spectrum of enigmatic beasts, it’s only slightly less mysterious than a Sasquatch,” the Oregon Zoo said in a 2012 article.

'They live in some difficult places — it’s hard not to admire the heck out of them.'

But last week the Washington Department of Fish and Wildlife confirmed the authenticity of two photos of what is thought to be a young female wolverine — one that made its way between the Naselle hills and the Pacific Ocean south of Leadbetter Point in just three days.

The first sighting was at about 12:15 p.m. May 20, in Naselle. Jacob Eaton, 19, took several photos of the rare creature running along a logging road and reported the sighting to WDFW.

The second sighting was at about 4:45 p.m. Saturday, May 23 north of Surfside.

While riding her fat-tire bicycle from her Surfside home to Leadbetter Point State Park earlier in the day, Jennifer Henry, 48, noticed a wake of turkey vultures feasting on a dead marine mammal washed up by the tide near the western edge of the dunes. By the time she peddled south toward home, the vultures had disappeared.

“I get up to it, and I was like, ‘Oh, there is something moving over there,’ and all of a sudden this head pops up and I was like, ‘Oh, hi there, aren’t you different,’” Henry said. She snapped a photo of a furry critter with distinctive markings that almost seemed to emerge from the carcass.

Henry at first thought she saw a badger — a weasel family member common in Eastern Washington — but when she went home and showed the photos to her husband, he identified it as a wolverine. Henry didn’t even realize wolverines existed, aside from the X-Men comic book character.

Henry reported the sighting the next day when she saw a WDFW officer on the beach.

“I asked, ‘Is it common to see wolverines here on the peninsula?’ and he was like ‘You didn’t see a wolverine,’” Henry said.

She had to show him the picture to prove it.

The wolverine is the largest land-based member of the weasel family, according to WDFW. Females weigh about 18 to 27 pounds and males weigh 26 to 44 pounds. They are stocky with short, rounded ears, small eyes, a bushy tail, and large feet that are useful for traveling through snow.

Their fur is dark brown, but has tawny colored bands that run down both sides of its body to its tail. They’ve been described as looking something like a cross between a dog, a bear and a skunk.

Jeff Lewis is a mesocarnivore conservation biologist at WDFW. He studies smaller carnivores, such as wolverines, fishers, lynx, Cascade red foxes, martens and badgers in Washington.

Lewis confirmed the animals Eaton and Henry saw were wolverines, and the one Henry saw was possibly a female based on its size, he said.

It is also highly likely it was the same animal, Lewis said. Traveling the 40 miles from Naselle to the north end of the peninsula wouldn’t be unusual for a wolverine, which can travel enormous distances in a short time, he said.

Eaton said he didn’t remember the one he saw having white on its chest, like the one Henry saw on the beach. He was driving with a buddy near Salmon Creek in Naselle. He wasn’t sure what it was at first and just started taking pictures.

“It wasn’t too happy though, it turned around and started showing its teeth and stuff,” Eaton said.

Washington’s wolverine population is small, largely restricted to the North Cascades, and is an extension of a larger population in southern British Columbia, according to the WDFW. They have also been documented near Chinook Pass, Goat Rocks and Mount Adams in Washington’s South Cascades, and in the Selkirk Mountains of northeast Washington, according to Conservation Northwest.

It is rare to see a wolverine, especially somewhere other than high-altitude, cold mountain areas, Lewis said. It’s hard to even get an accurate estimate of how many are living in Washington, because they are so elusive. They like to live apart from others of their species and they roam over large areas of land, he said.

But confirmed sightings are becoming more common since so many people are now walking around with a smartphone camera in their pocket, Lewis said.

Still, capturing two photos of the animal is really exciting, he said.

“This is one of those examples where we are actually able to document one of these long movements of wolverines away from their typical habitat,” Lewis said.

Wolverines making these kinds of journeys can explain gene flow of different wolverine genetic characteristics in broad areas. It also might help explain how wolverines can recolonize areas they’ve long been vacant from — such as in California and Colorado — where wolverines are now reestablishing a presence, Lewis said.

He is hopeful the department might get a DNA sample of the one exploring the peninsula. That would help biologists understand if it came from the Cascades or from somewhere farther away.

The presence of a wolverine on Washington’s southernmost coast comes at a time when the species is in the news.

On March 18, Earthjustice sued the U.S. Department of the Interior on behalf of Conservation Northwest and other conservation groups to force the federal government to protect wolverines under the Endangered Species Act. Perhaps never abundant, wolverines disappeared from much of their former range by the early 1900s, and face new threats from climate change and ongoing loss of habitat, the wildlife advocates argue.

“The wolverine is an icon of our remaining wilderness,” Earthjustice attorney Timothy Preso said in a press release. “We are taking action to ensure that the wolverine gets a fighting chance for survival.”

“If you’ve ever seen a wolverine in the wild, you’re one of a very lucky few,” said Brad Smith on behalf of one of the plaintiffs in the case.

WDFW and the Woodland Park Zoo monitor wolverine distribution in the Cascades to evaluate the population’s response to climate change as part of the Washington Wolverine Project.

Lewis said because wolverines like to live in cold, snowy areas, WDFW is concerned to what extent the species is vulnerable to climate change.

One of wolverine’s cooler characteristics is the possibility they deliberately refrigerate meat by burying it in the snow, Lewis said. They can kill something in the summer and keep it buried to retrieve when game is more scarce.

“They are really good at exploiting the patchy food that is available to them in the wintertime,” he said. Other scientists consider ample high-elevation snowpack — something at risk as precipitation patterns change in our warming region — vital for protecting wolverine young from predators.

“They live in some difficult places — it’s hard not to admire the heck out of them,” Lewis said.

He said he hoped the one spotted in Pacific County stayed safe.

Wolverines are capable of incredible long-distance travels, so it's possible the young one observed near Leadbetter Point State Park may have already exited the area. On the other hand, the extensive coastal wilderness at Leadbetter — protected both by State Parks and the Willapa National Wildlife Refuge — offers plenty of food and shelter for this rare and versatile creature.

Aaron Webster, a south Pacific County employee of State Parks, has started a Facebook page in hopes of tracking future sightings of the wolverine he has dubbed Wanda Wanderer.

"Folks, you may have heard on the news about a wolverine sighting in my area," Webster said in a Facebook post. "I'm creating a FB page for this creature under the name Wanda Wanderer. I hope that if we have more local sightings, I can post them on Wanda's page so people can follow her exploits. So, if you want to join in on this, just send Wanda Wanderer a friend request. If you see Wanda, post details on Wanda's page and I will make a post about it!"

Join this effort at www.facebook.com/wanda.wanderer.710.

News of south Pacific County's wolverine has itself traveled far and wide, with first CNN and then a variety of other media from New York City to India doing stories sparked by the Chinook Observer's initial story published online May 28 after our print deadline last week. The number of people who have viewed our original story is approaching 40,000 — many times our print circulation.