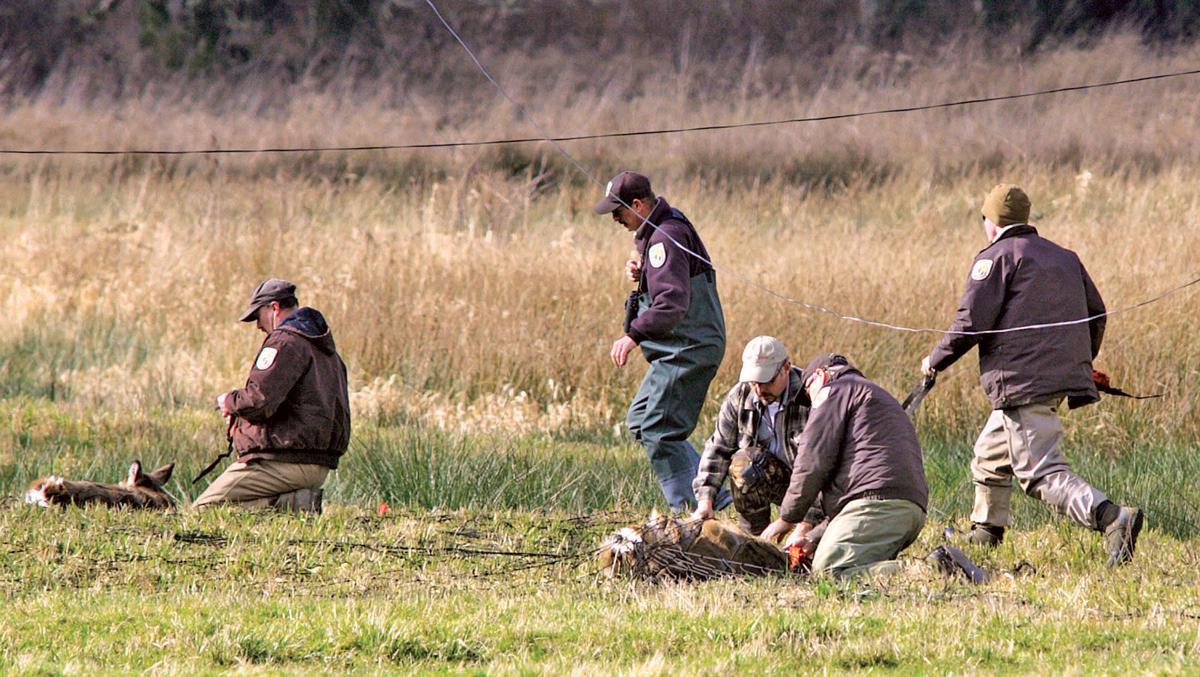 Caught in net traps, two Columbian white-tailed deer are prepared for transplantation to another location by U.S. Fish and Wildlife Service employees after a roundup in February 2013. 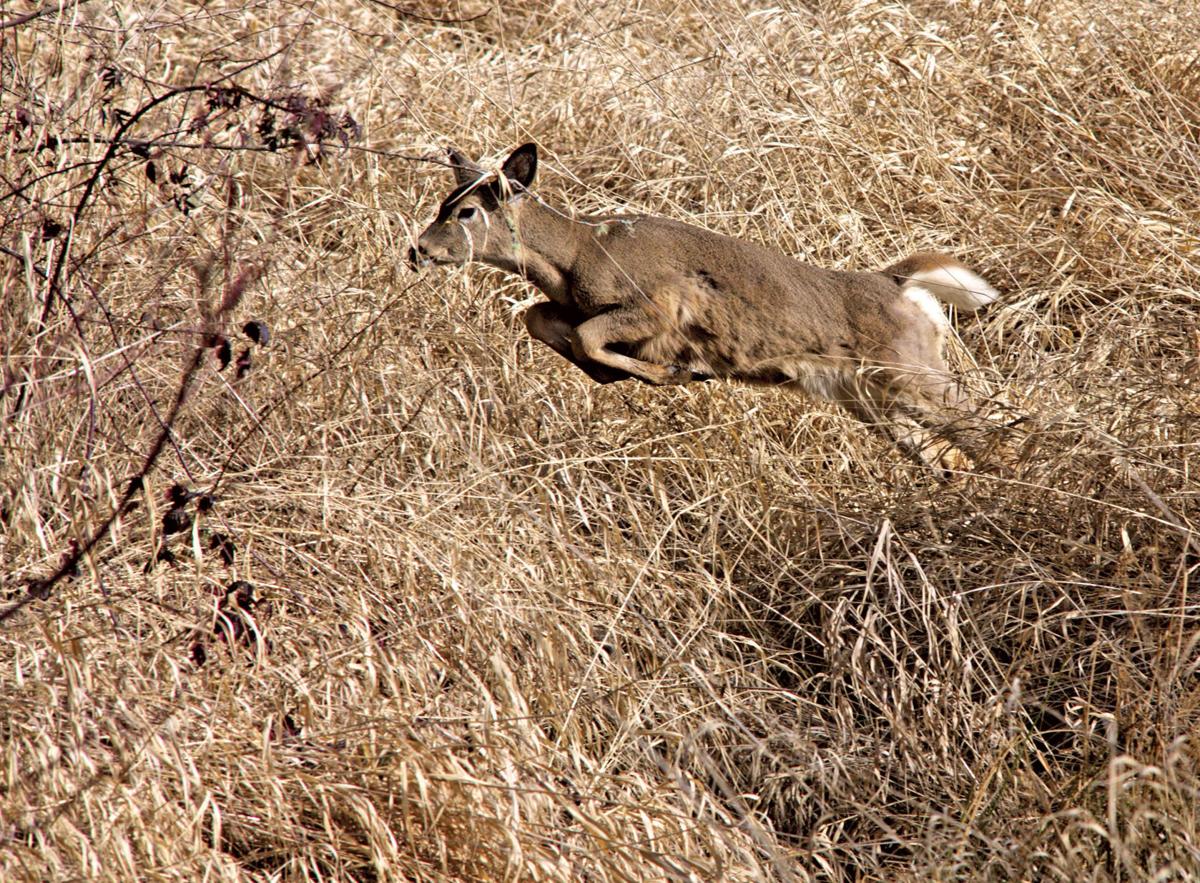 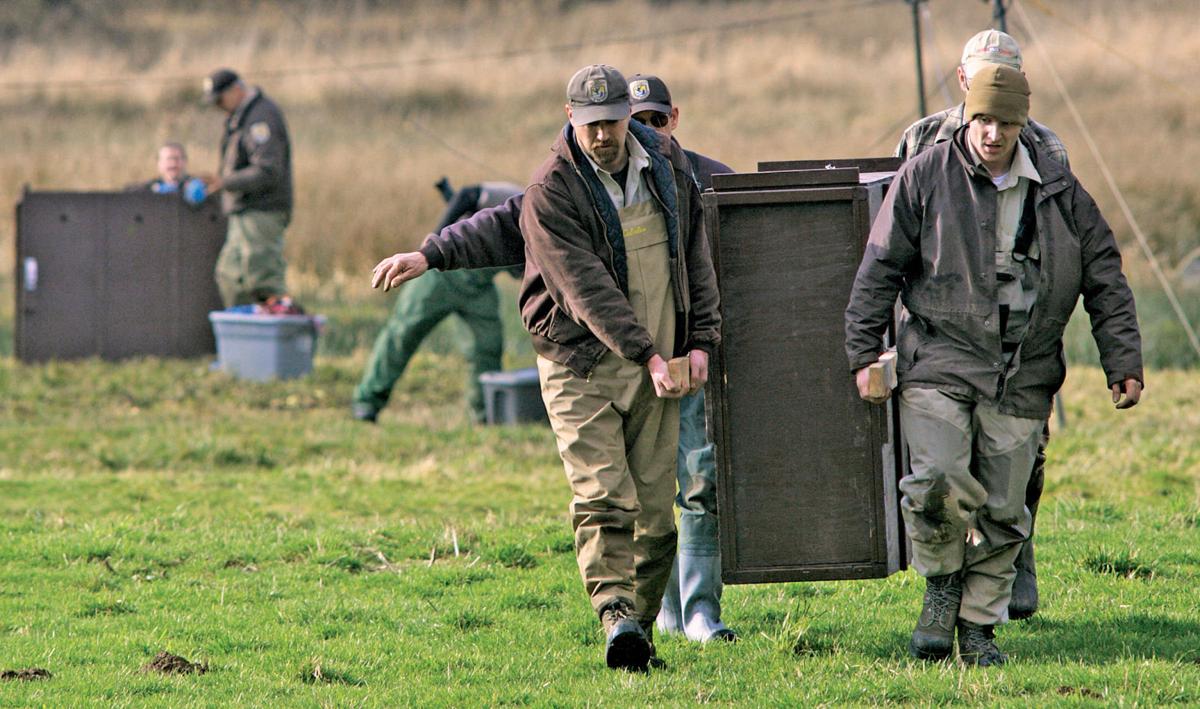 U.S. Fish and Wildlife Service workers carry a captured Columbian white-tailed deer netted near Skamokawa in 2013. Some deer were moved to Oregon in an effort to make sure the species survives.

Caught in net traps, two Columbian white-tailed deer are prepared for transplantation to another location by U.S. Fish and Wildlife Service employees after a roundup in February 2013.

U.S. Fish and Wildlife Service workers carry a captured Columbian white-tailed deer netted near Skamokawa in 2013. Some deer were moved to Oregon in an effort to make sure the species survives.

SOUTHWEST WASHINGTON — State and federal wildlife managers have been trying to save the endangered Columbian white-tailed deer since the late 1960s, with mixed results.

A population in southern Oregon has bounced back, and has been removed from the federal Endangered Species List. However, despite extensive efforts to improve their habitat, control predators, and even trap and relocate them, their counterparts on the Lower Columbia River continue to struggle.

Although federal wildlife managers are calling the Columbia River recovery effort a success, Washington Department of Fish and Wildlife biologists are less optimistic. In an April report, WDFW recommended keeping the deer on the state’s Endangered Species List. The biologists said that while their range has expanded somewhat, their small population size, fragmented habitat and low-quality food sources are hurting chances of recovery.

Until the mid-1800s, CWTD occupied a 60,000-square-kilometer range that extended across much of western Oregon and Washington. Over-hunting and habitat loss nearly wiped them out in the early 1900s. By the time they were placed on the federal Endangered Species List in 1967, there were as few as 300 CWTD on the Lower Columbia.

Now, two isolated groups occupy a tiny fraction of that territory. The Roseburg population includes at least 6,000 animals, on a range of about 300 square miles in Douglas County, Oregon. The Columbia River population has fluctuated from a low of 545 deer in 2002, to an estimated high of 966 in 2015. Their 93-square-mile range is a checkerboard of mainland and island habitats along the Columbia River, in Clatsop and Columbia counties in Oregon, and Cowlitz, Wahkiakum and Clark counties in Washington.

WDFW biologists say six or more small subpopulations are isolated by both natural barriers, like rivers, and man-made barriers, like State Route 4 — a deadly obstacle that slices through the middle of their Wahkiakum County range.

Researchers are still trying to learn what size CWTD population is self-sustaining, but they are confident most of the Columbia River subpopulations aren’t yet at that level. With such low numbers, they’re especially vulnerable to inbreeding, diseases and natural disasters.

“In general,” the report said, “these are issues that existed when CWTD was first listed as a State Endangered Species, and are still issues to this day.”

Historically, CWTD probably preferred grasslands and lightly wooded areas, rather than soggy lowlands, according to the report. They like areas with streams, and a variety of grasses, shrubs, fruits and other foods. They don’t like competing with livestock or elk. As the human presence in the Northwest expanded starting in the 1850s though, the Columbia River deer were forced into wetter, more flood-prone places.

Just because these sites are protected, doesn’t mean the deer actually like them. With a long history of flooding and erosion problems, the JBH Refuge, which was established in 1971 to aid in CWTD recovery, is arguably the least hospitable of the sites. In fact, deer on some pieces of nearby privately held land seem to be doing better than refuge deer. Currently, there are about 228 deer on the almost entirely privately owned Puget Island, near Cathlamet, and about 100 at JBH.

The Columbia River deer have had to adapt to conditions that don’t meet their needs.

Researchers have found that deer in different parts of the range eat very different diets — a sign that the deer “are selecting food items on the basis of availability and less as a result of their actual food preferences.”

In theory, a CWTD can live up to 20 years, but most Columbia River CWTD live somewhere between five to 10 years. Fawn survival rates have improved in recent years, but they still fluctuate “... dramatically from year to year and from site to site.”

Fawn survival is closely tied to environmental conditions and coyote predation. A 2010 study at JBH found only about 20 percent of 131 radio-collared fawns survived the fawning period. Coyotes killed at least 69 percent of the fawns that died, with disease and starvation killing still more.

On top of all that, “Periodic episode of catastrophic flooding have caused large losses of Columbia River adults and fawns,” especially at JBH, the report said. Malnutrition, disease, vehicle collisions, poaching, predation and fence entanglement killed other adult deer.

Since the 1980s, wildlife managers have “translocated” 314 deer between sites. When a dike near JBH threatened to break in 2013, USFWS used helicopters and dart-nets to capture 37 deer and move them to Ridgefield.

These efforts have had “mixed success.” The 58 deer moved to Ridgefield in 2013 and 2014 seem to be settling in, but scientists say it’s “still too soon” to say whether they’ll thrive there. A group of islands near Longview “have failed to maintain ... the target population of 50 deer,” with many departing for nearby private lands. A total of 27 deer were moved to Cottonwood Island in 2010 and 2013. Now, 12 to 20 deer remain.

Since 2006, deer have been moved both to, and from JBH, but the population has never stabilized. According to the report, Wallace/Westport and Puget Islands “have shown greater stability” than “the protected, though much more flood-prone JBH Mainland unit.”

USFWS has tried to make JBH more hospitable through habitat restoration, flood control, and planting better food sources. Refuge managers have also contracted the U.S. Department of Agriculture to help control coyotes. Between 1997 and 2008, the USDA “removed” 46 coyotes from JBH, according to a separate 2013 USFWS report. Fawn survival improved as a result, so the “coyote control” program has continued. In 2013, USDA also began “removing” coyotes from Ridgefield.

WDFW managers believe “Some actions have shown promise and have helped enhance this population.”

According to the report, Tenasillahe Island, near Skamokowa, is “the one site” where translocated deer have consistently done well. Since the last translocation in 1988, the population has reliably stayed between 100 and 200.

Tenasillahe is comparatively large and dry, with the mix of pasture and deciduous forest habitat CWTD prefer. There are no humans or elk living on the island, so the deer don’t have to compete for resources.

Wildlife managers will have to figure out how to duplicate those conditions elsewhere, study authors said. Upcoming studies should provide valuable new information about how big the population needs to grow to become self-sustaining, and how to connect the isolated pieces of habitat and expand the Columbia River range.