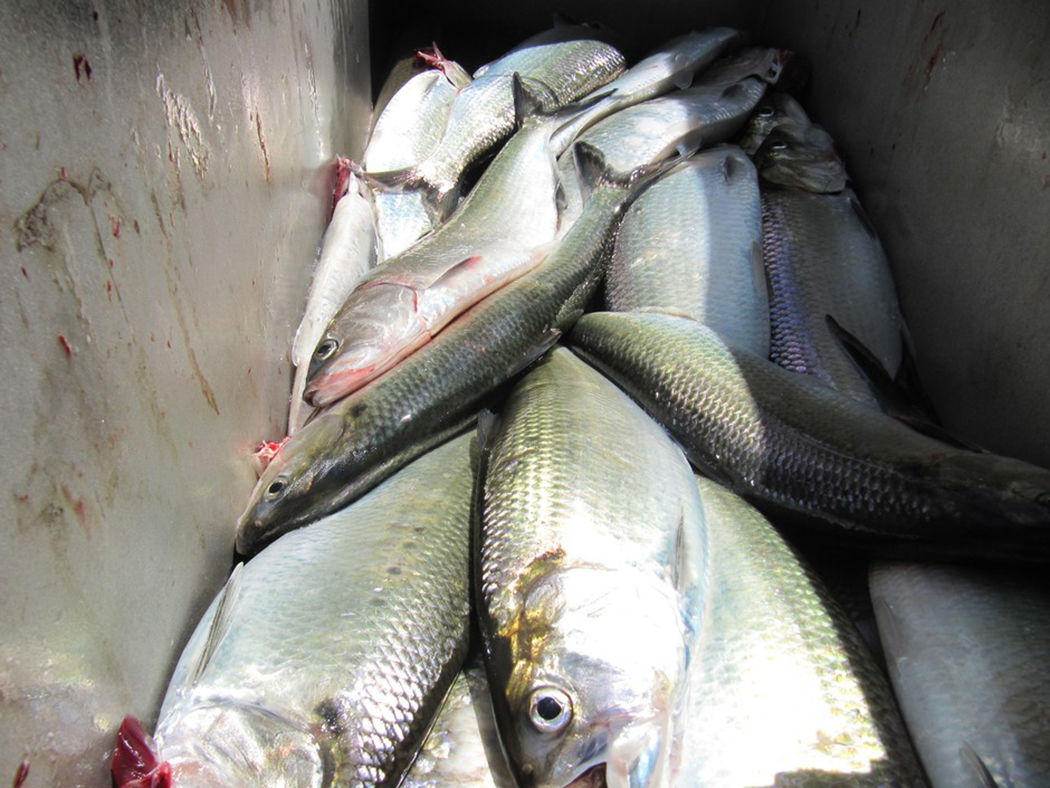 Shad are invasive in the Columbia River, so you can catch as many as you want, as long as you have a fishing license. 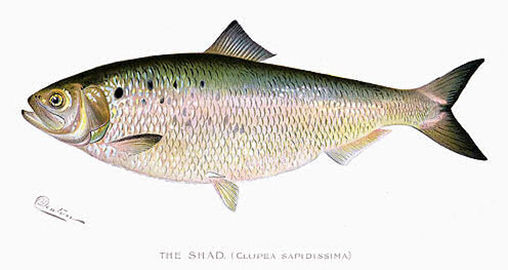 Prized on the East Coast, American shad thrive in the Columbia River but hardly register with fishermen.

COLUMBIA RIVER — American shad, a silvery bullet of a fish whose home waters are on the East Coast of the U.S., migrated into the Columbia River basin this year in record numbers. Nearly 7.5 million of the 18-inch, 3 to 8 pound fish crossed Bonneville Dam, more than four times the number of salmon and steelhead that have crossed the dam this year.

Not only has a record number of the shad passed upriver, they have been observed in fairly high numbers as far upstream on the Snake River as Lower Granite Dam (16,347 as of Aug. 25) and in lower numbers as far upstream on the Columbia River as Wanapum Dam (7 shad counted). More than 3 million of the fish passed McNary Dam on the Columbia. Ice Harbor Dam on the Snake River saw more than half a million shad.

The numbers of shad and their spread upstream has blossomed since the construction of The Dalles Dam which removed a barrier to the shad’s upriver migration — Celilo Falls.

The commercially successful shad fishery on the East Coast caught the eye of the California Fish Commission, so it first introduced some 10,000 shad fry in 1871 into the Sacramento River about 275 miles upstream of Sacramento, Calif., and another 35,000 fry were planted in 1873, according to a 2012 study by Dr. Daniel Hasselman. Some of those shad found their way to the Columbia River and were observed as early as 1875.

Columbia River shad migrate from the ocean upstream where each female will lay up to 150,000 eggs. The eggs are not sticky, so they roll around on the river’s bottom in the current and hatch within 12 to 15 days at 52 degrees Fahrenheit or in 6 to 8 days at 63 degrees F, which is more typical of Columbia River temperatures. The larvae are about 9 to 10 millimeters (0.35 to 0.39 inches) long. Juvenile shad remain in the river until fall, when they move down to salt water.

Although the shad run into the Columbia River is huge, it’s likely much larger than dam counts show. According to Hasselman, “preliminary tagging data suggest that a large proportion of the spawning run — perhaps more than half — never pass Bonneville Dam.” Unlike Pacific salmon species, many shad survive spawning and return to the ocean to repeat the cycle.

Still, little is known or has been studied about the impacts that such an invasion could have on the recovery of Columbia River salmon and steelhead listed under the federal Endangered Species Act, and NOAA Fisheries has no shad expert on staff at its Northwest Fisheries Science Center, according to Vicky Krikelas, outreach, social media and web content coordinator at the science center.

Columbia River shad migrate from the ocean upstream where each female will lay up to 150,000 eggs.

She did point to other researchers who have studied shad in the Columbia basin,. However, Hasselman, who completed a study last year on the genetic differentiation of shad in West Coast rivers, now lives in British Columbia.

He was not surprised that none to very little research is being done on shad impacts on Columbia River salmonids: “Salmon dominates the research agenda, with little attention paid to shad — despite the ecological implications for Pacific Coast rivers,” he said.

In his 2012 study, Hasselman said that American shad “increased dramatically in abundance and now comprise the largest spawning run of anadromous fish in the Columbia River. Despite constituting a remarkable biological invasion, invasive shad have not been the subject of much scientific investigation and remain relatively obscure in the Pacific Northwest.”

In a graph, Hasselman shows that since about 1975 the number of shad entering the Columbia River year to year has exceeded the total number of indigenous salmon and steelhead that migrate into the river.

The Columbia River tends to get large runs of shad following low-flow years, said Michael Milstein, NOAA Fisheries spokesman. “Shad mature after 3 to 5 years so this may reflect high reproduction after low flows in 2015 and 2016. This is likely the reason for the big returns.”He added that a workshop in 2008 discussed the threat posed by different introduced species (https://tinyurl.com/Invasive-Shad), including shad. “Shad were not identified as a substantial threat, although they did discuss whether other non-native predators may benefit from preying on shad,” Milstein said. “There is a lot of food available for fish in the Columbia system in summer and no evidence that shad are competing with salmon to the point it’s affecting their growth rates or productivity. Juvenile Chinook salmon are known to prey on juvenile shad until they grow too large, so there could be some benefit the other way.”

The expectation is that the shad numbers will decline as a result of higher flows in 2017-18 as returns from those years come in, he said.

As for this record shad run, in July the huge number of shad clogging fishways and counting stations at dams at one point confused biologists and river operators at an interagency Technical Management Team meeting as to how many endangered Snake River sockeye had passed dams. As a result, checks and corrections to previous fish counts were required at both McNary Dam on the Columbia and Ice Harbor Dam on the Snake. The correction lowered the recorded number of sockeye that had passed the dams. That adjustment in fish passage numbers allowed biologists to get a handle on what seemed to be a low conversion rate (the number of fish passing one dam that successfully pass the next upstream dam) for sockeye between Ice Harbor and Lower Monumental dams.

Some studies over the past few years have found that shad can have a positive impact on Columbia River salmon.

One study in 2017 found that shad could be providing food for subyearling Chinook salmon, at least in the John Day Dam reservoir where the study was conducted. By August, late migrating subyearlings change from a diet of plankton and Daphnia, a freshwater crustacean, and begin to feast on juvenile shad, the study said.

It had once been thought that the juvenile shad would compete with the subyearlings for food, but a recent study found instead that subyearlings prefer the high-energy diet provided by shad juveniles and turn from their normal diet of plankton to juvenile shad, especially as the reservoir water warms up.

“This study found that young Chinook salmon feed at a high rate on Daphnia in reservoir food webs, but then switch to feeding on shad, a prey with higher energy density,” said Craig Haskell, a fishery biologist at the U.S. Geological Survey. “This switch helps young salmon compensate for the increased metabolic costs of higher than optimal water temperatures during summer.”

As for the juvenile shad, they fed mostly on copepods and less than 1 percent of their diets consisted of the types of food typically eaten by subyearling Chinook (There are actually few of the subyearlings still in the river. By August most have already migrated seaward).

In another positive aspect of the shad invasion, the fish (especially as the numbers of salmonids migrating into the Columbia River basin have declined) is also replacing marine-derived nutrients to the river as they spawn and die, according to another 2017 study, also with Haskell as a co-author.

According to the study, the great salmon runs of the Columbia River, once thought to be 11 to 16 million fish annually, have declined and with their decline the nutrients the fish brought to fresh water in the form of excretion, gametes and carcasses have declined by as much as 90 percent. Now it’s the shad that contribute as much phosphorous and nitrogen as do salmon.

Marine-derived nutrients can help algae and microbes to grow and fuel invertebrates and fish, the study says.

However, a 2016 study on nutrients that are provided by Chinook and shad in the Columbia River found that inputs of phosphorous derived from these species is inconsistent and vary from year to year and by location, but that the addition of these nutrients are still important.

“Nutrient loading from fishes is most important to ecosystems that have naturally low concentrations of nutrients due to natural factors including their underlying geology (rocks low in phosphorus) and vegetation (trees with nutrient-poor leaves),” said Lily Twining, Ph.D. candidate, Cornell University, Department of Ecology and Evolutionary Biology. “In these naturally low nutrient systems, nutrients from fishes can help algae and microbes to grow and fuel invertebrates and fishes.”

In systems that are either naturally higher in nutrients or those highly disturbed by human development and agriculture nutrient loading from fishes is much less important because nutrients running off the land from fertilizers and livestock waste or seeping into water from septic tanks can make up and often eclipse the inorganic nutrient inputs from fishes, Twining added.