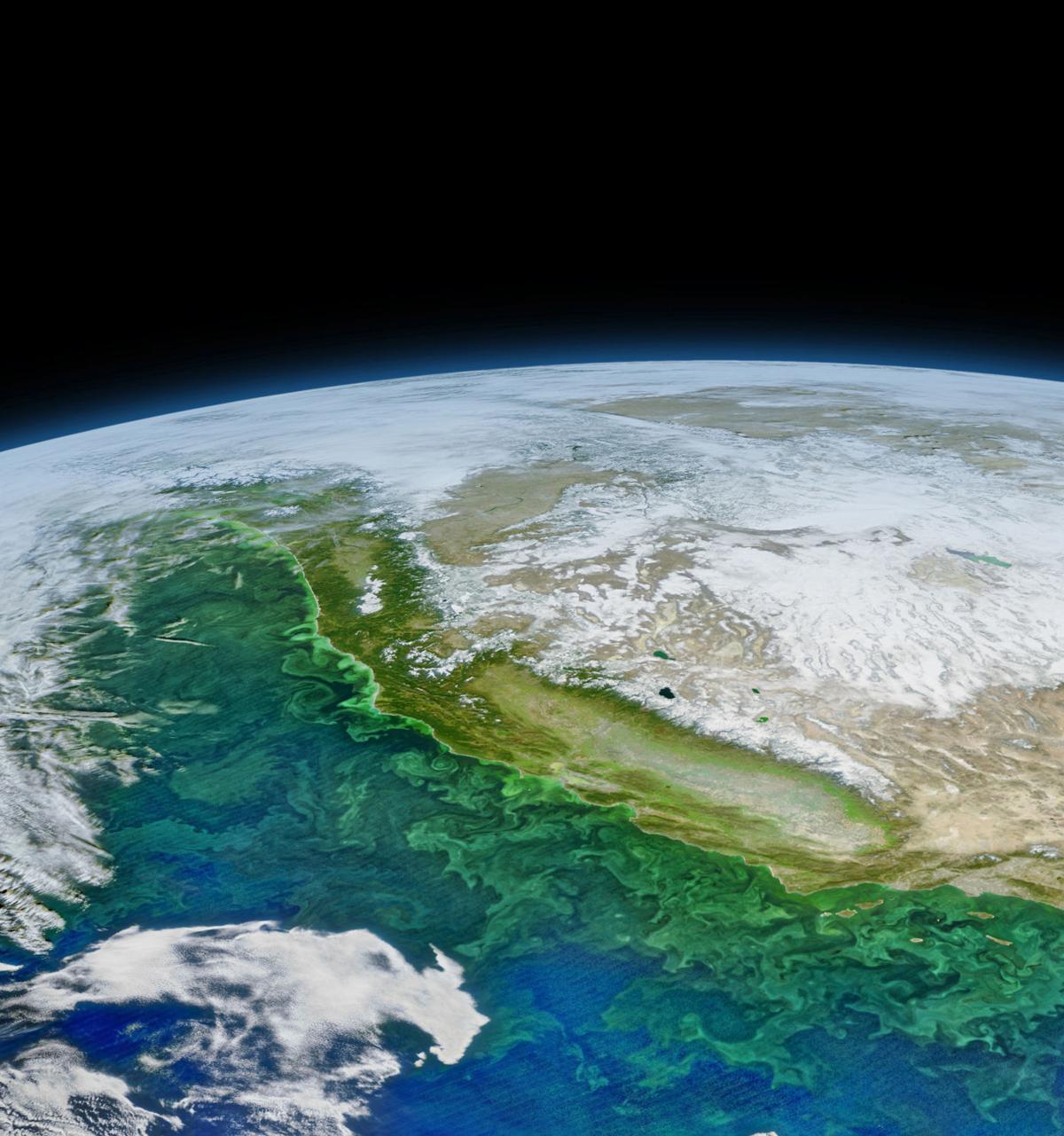 Darker green colors near the West Coast of the U.S. reflect blooms of phytoplankton and high algal levels, some of which are toxic. 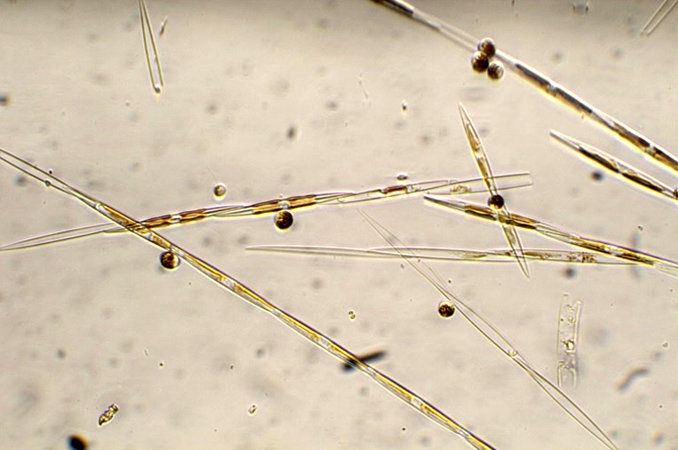 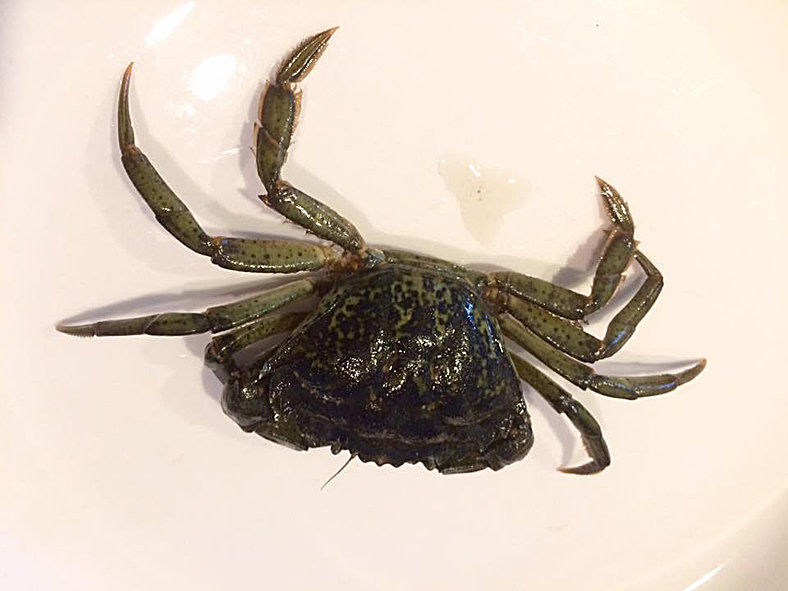 This mature inveasive European green crab was found in Willapa Bay in November 2016. The same warm ocean waters that cause domoic toxin to spike also encourage green crab, which compete with native species.

Darker green colors near the West Coast of the U.S. reflect blooms of phytoplankton and high algal levels, some of which are toxic.

This mature inveasive European green crab was found in Willapa Bay in November 2016. The same warm ocean waters that cause domoic toxin to spike also encourage green crab, which compete with native species.

Using a combination of time-series data spanning two decades, the scientists not only showed a clear link between domoic acid and these larger climatic forces, but also developed a new model to predict with some accuracy the timing of domoic acid risks in the Pacific Northwest, according to an Oregon State University summary of a Jan. 9 report in the Proceedings of the National Academy of Sciences.

The model is based on interpreting the status of the “Oceanic Niño Index” and the Pacific Decadal Oscillation — both which measure climate, ocean water movement, currents and temperature. It’s designed to help coastal resource managers more effectively monitor this issue and protect public health.

The findings were made by researchers from OSU, the University of Oregon, the National Oceanic and Atmospheric Association (NOAA), and the Oregon Department of Fish and Wildlife. The work was primarily supported by NOAA.

Researchers also pointed out that the findings are particularly timely, given the potential for greater domoic acid outbreak occurrences as oceans continue to warm due to climate change.

Domoic acid, a potent neurotoxin produced by specific types of phytoplankton and ingested by shellfish, can cause serious health effects in humans, seabirds and some other animals. In recent years, dangerous levels of these toxins have led to the repeated closure of crab and shellfish harvesting in the Pacific Northwest and elsewhere. The problem threatens public health, marine wildlife and can cost millions for coastal economies. Until now, its connection to larger climatic forces has been suspected, but not confirmed.

“In the natural world there are always variations, and it’s been difficult to connect a specific event to larger forces that operate over periods of years and decades,” said Angelicque White, an associate professor and research team leader in the OSU College of Earth, Oceanic and Atmospheric Sciences.

“To do so, long observational time-series are crucial. With NOAA’s commitment to sponsored coastal ocean research and monitoring, along with state support for monitoring shellfish toxins, we’ve finally been able to tease out short-term variability from natural climate forcing.”

Beyond problems with domoic acid levels, White said, this correlation also appears to mirror problems with green crabs, an invasive species of significant concern in the Pacific Northwest. These same warm climate phases lead to increased numbers of green crabs in Oregon waters, where they compete with native Dungeness crabs. The conditions also deliver communities of lipid-poor “copepods” — types of small crustaceans that float with currents — from the south, that are associated with reduced salmon runs.

The new study shows that oscillations to positive, warm-favorable conditions in natural climate cycles can reduce the strength of the south-flowing California Current. This allows more movement northwards of both warmer waters and higher levels of toxic plankton, and also brings that toxic mix closer to shore where it can infiltrate shellfish.

“Part of the concern is that a large influx of the plankton that produce domoic acid can have long-term impacts,” said Morgaine McKibben, an OSU doctoral student and lead author on the study.

“For example, razor clams are filter-feeders that bioaccumulate this toxin in their muscles, so they take much longer to flush it out than other shellfish. The higher the toxin levels, the longer it takes for razor clams to be safe to eat again, perhaps up to a year after warm ocean conditions have subsided.”

Domoic acid is produced by the diatom genus Pseudo-nitzschia, and enters the marine food web when toxic blooms of these micro-algae are ingested by animals such as anchovies and shellfish. Referred to as “amnesic shellfish poisoning,” human symptoms can range from gastrointestinal disturbance to seizures, memory loss or, rarely, death. It was only first identified as a public health threat in 1987, and has been monitored on the U.S. West Coast since 1991.

Domoic acid events have been linked to mass deaths of marine mammals, like sea lions, sea otters, dolphins and whales. And closures of Pacific Northwest beaches to shellfish harvests, such as those that occurred in 2003, 2015 and 2016, can result in large economic impacts to coastal towns and tourism. In 2015, domoic-acid related closures led to a decline in value of nearly $100 million for the West Coast Dungeness crab fishery, according to the Fisheries of the U.S. Report 2015.

“Advance warning of when domoic acid levels are likely to exceed our public health thresholds in shellfish is extremely helpful,” said Matt Hunter, co-author of the study with the Oregon Department of Fish and Wildlife. “Agencies like mine can use this model to anticipate domoic acid risks and prepare for periods of more intensive monitoring and testing, helping to better inform our decisions and ensure the safety of harvested crab and shellfish.”