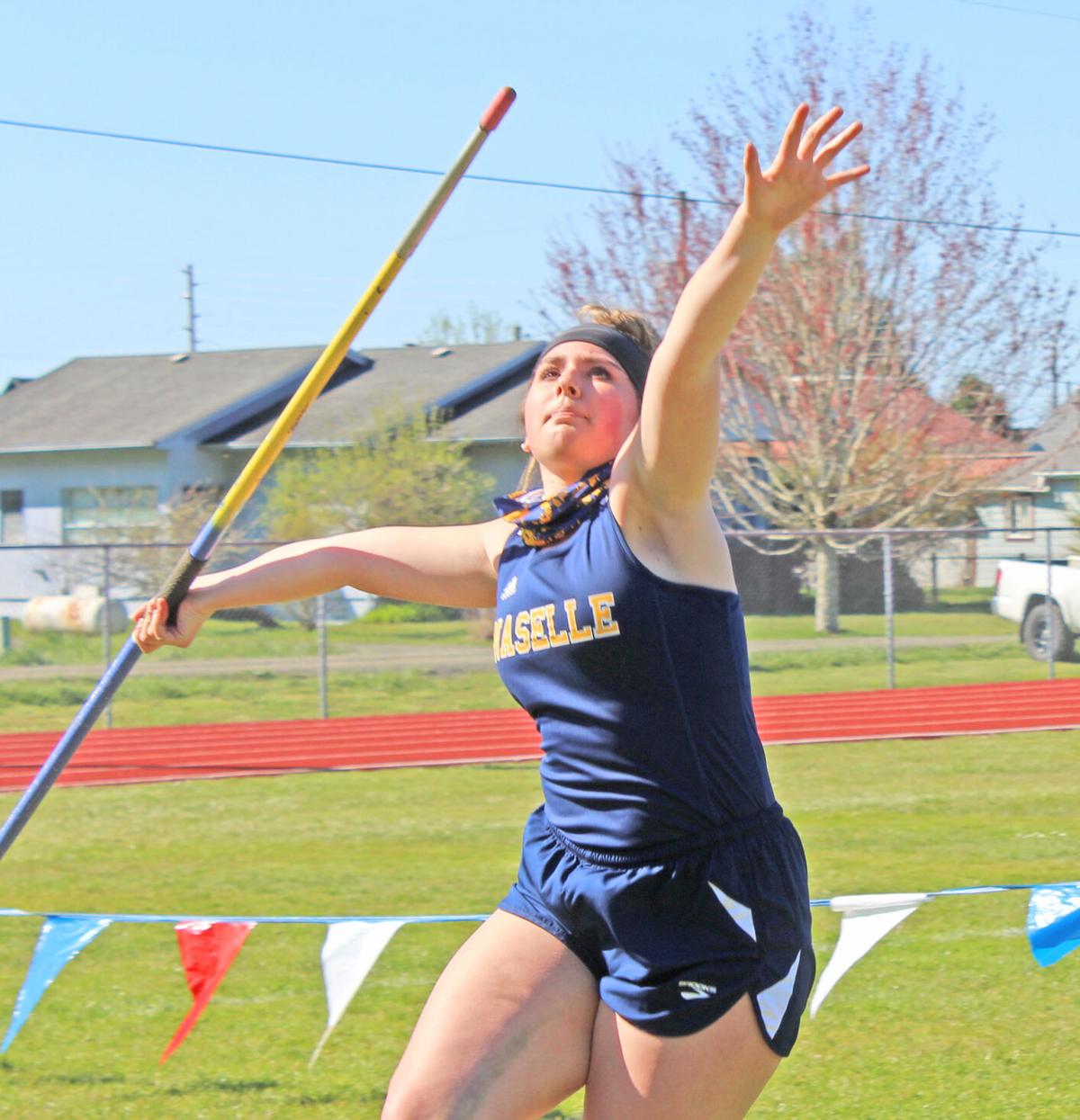 Emma Colombo of Naselle throws at the South Bend meet, her next to last appearance in a Comet track uniform. She won the javelin with 100 feet 5 inches, an identical throw from two days prior in Cathlamet. Covid ruined her chance of returning to the WIAA state championships for her junior and senior years. She would have been ranked No. 2 in the state. 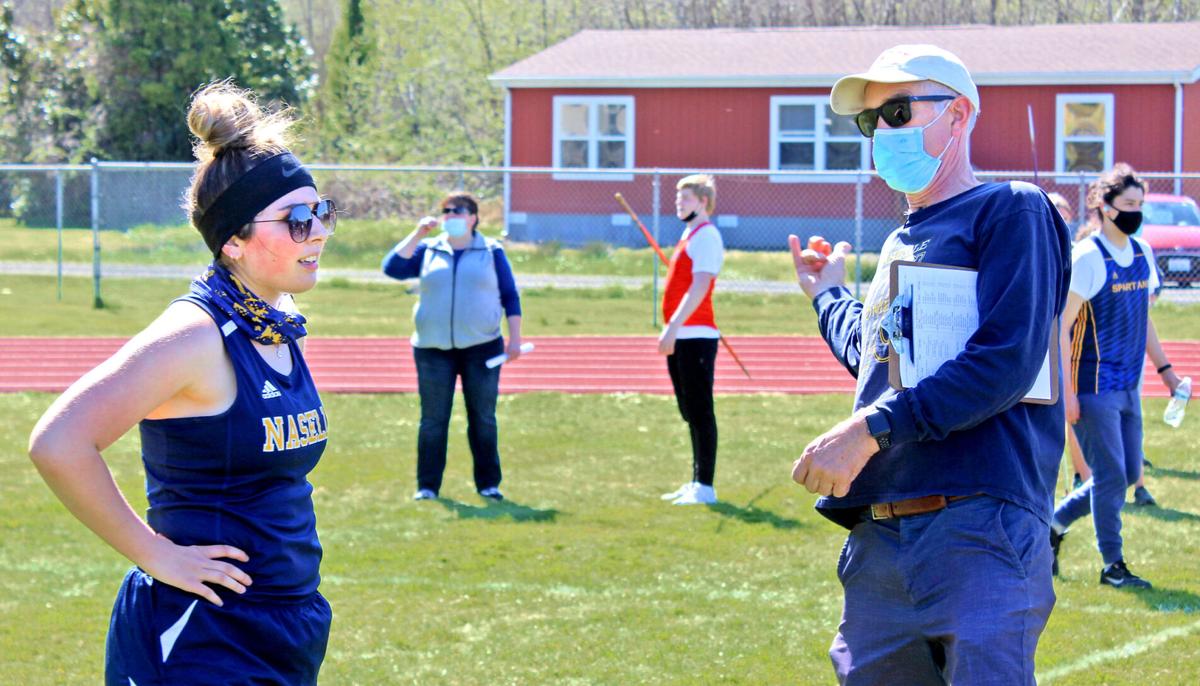 Naselle head track coach Scott Smith, right, offers some last-minute pointers to Emma Colombo as she prepares to compete at the South Bend track meet last week. Smith credits Colombo’s “hand speed” for part for her success in the javelin. 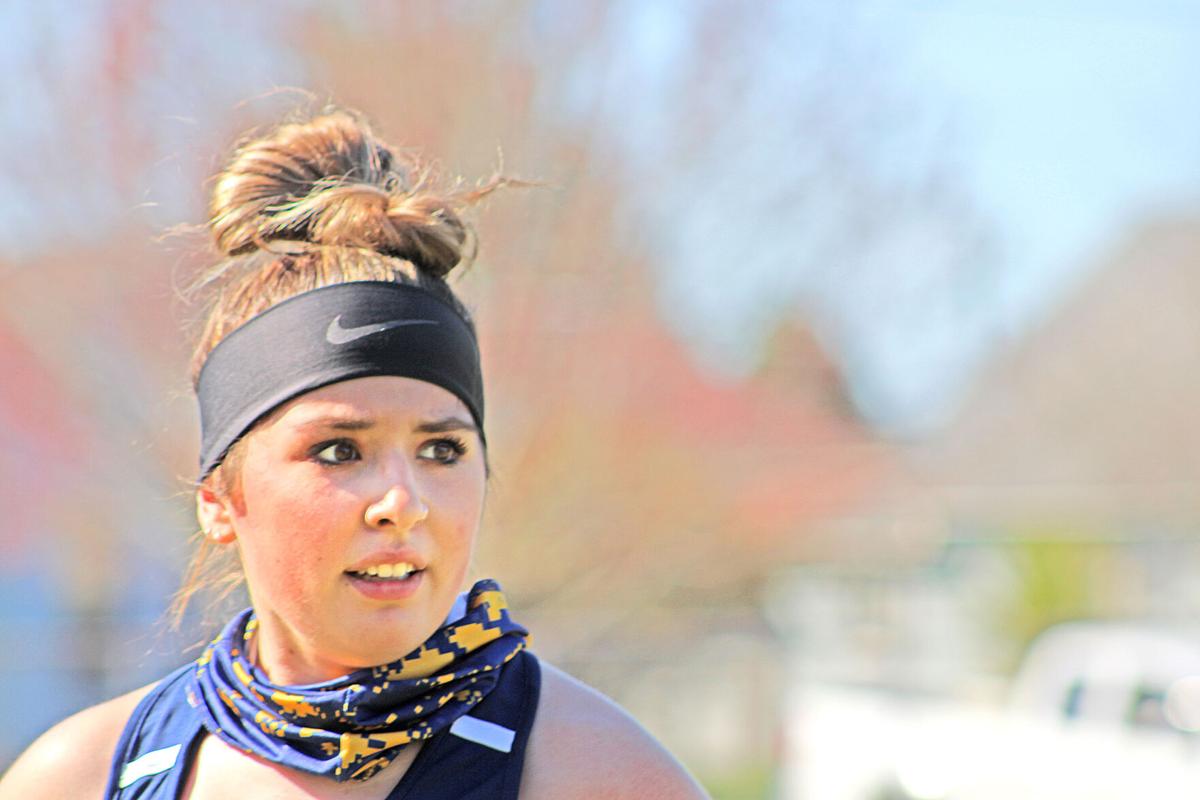 Emma Colombo of Naselle is a formidable javelin thrower who also competes in shot put and discus.

NASELLE — Three-sport athlete Emma Colombo’s covid story is “what might have been.”

We are profiling a few south Pacific County seniors whose high school careers will be forever marked by the covid-19 pandemic.

The Naselle High School senior has taken the shutdown and the shakeup in her stride.

But it has meant losing the chance to prove she may be the best small-school javelin thrower in Washington.

The saga began in middle school when the eighth grader picked up a lightweight Turbo javelin and discovered an aptitude. Javelin, a sport adapted from ancient warfare, delights coaches and fans who savor how years of practice is channeled into one run up and throw that lasts six seconds.

At the end of her sophomore year in May 2019, Colombo stepped up on the podium at the WIAA state championships, accepted her seventh-place medal and grinned broadly for a photographer.

'In my sophomore year, I didn’t realize it was going to be my last year at state.’

Five of the girls ahead of her at Cheney were graduating seniors, and the other, sixth-place Brianna Young of Northport, was an underclassman.

The prospect of returning to Eastern Washington University a year later to compete against Young and athletes from Shoreline Christian, St. John Endicott and Neah Bay, who as freshmen were already throwing in the 80s and 90s, seemed enticing.

After her Cheney success, Colombo began her junior year reporting to coach Bekah Wirkkala for volleyball duty and ended the season at state, having been named to the Columbia Valley all-league second team. A winter change of pace to maintain her fitness saw her debut on the Comet cheerleading squad, cheering both basketball teams to state in Spokane where the boys placed third.

When it was time to change uniforms, spring track and the 2020 Cheney podium beckoned.

Covid had other plans for Naselle High School.

And the rest of the planet.

Restrictions continued through the fall.

After Christmas, the WIAA schedule shuffle meant football and volleyball went ahead with shortened seasons, but no state championships. Colombo was a Naselle Homecoming princess and played volleyball again — this time wearing a mask, as required.

She was philosophical. “You make yourself better and give it your all for the time you have,” she said.

Track squads develop a camaraderie akin to family. Boys and girls train together with the same coaches; they endure Washington spring weather that’s either pelting rain or baking hot; they borrow shoes and jackets. And most of all, they cheer for each other, including opponents. When football lineman George Wilson ran the 3,200 meters at South Bend Thursday, his concluding lap was seven minutes behind the winner. Comet teammates weren’t alone in their vocal encouragement — athletes from Forks and Napavine joined in, cheering the junior home.

Colombo thrives amid that ethos, which is strongly encouraged by Head Coach Scott Smith.

“It’s all of us helping each other,” she said, taking a break at a South Bend meet last week under a giant blue canopy. “I look at all of us doing track, and working together. It’s so positive.”

Her brother, Brayden, is a sophomore who has thrown 123-04. “She’s helped so much,” he said, recalling some earlier missteps. “I didn’t have the right technique and she helped.”

His classmate, Kaylin Shrives, has benefited, too. And despite having an even slighter build, Shrives’ throws in the discus and shot put have been consistently better than Colombo’s this season (they set personal records in both events at South Bend).

“She really helped me a lot,” Shrives said. “Mr. Smith said, ‘Go try javelin,’ so I did. She’s a good teacher. I have really looked up to her, especially with javelin, but I have looked up to her in all sports.”

Developing others comes naturally for Colombo.

“I like helping them,” the senior said. “It’s easy when they have your back and there are a bunch of people that can do it. If people didn’t give positive feedback, you don’t get better. Here, everyone works and can support our whole team, rather than focus on themselves.”

Coach Smith has helped guide her recent progress. “She’s worked really hard in practice and now can put it all together,” he said. “She is having a good year and she’s ending where she started two years ago.”

He said Colombo understands that javelin must combine strength with technique.

“It’s not so much strength as shot is, or even discus. She has good hand speed,” he added, demonstrating the coordinated motion from behind the shoulder and follow through that enables a person without significant upper body power to hurl the spear more than 90 feet.

South Bend javelin judge Kat Staats commended Colombo when she threw 100 feet 5 inches for first place. Eerily, it was identical to her winning throw two days earlier at Cathlamet; she had won her two earlier meets with throws in the 90s.

Next is the District 4 culminating meet at Raymond Wednesday. Colombo and her coaches will have an opportunity to review what might have been. A website, athletics.net, tallies sports achievements for 1B districts.

Northport, the tiny northeast Washington school where 2019’s sixth-place thrower Young is a senior, did not field a track team, in part because the coach had resigned, and only offered softball and baseball, said Mustangs athletic director Alistair Shull. “We had some disappointed kids,” he said.

So Colombo goes into this week’s finale with high hopes that her performance will be among the best at Washington 1B schools.

“I feel that this year I am a lot better than I was in my sophomore year,” she said. “Maybe it’s just finally ‘clicking.’ It’s been a good year for javelin. The coaches have emphasized more specific work on technique.”

In part because track is outdoors, masks slip during competition to ease breathing during significant exertion.

“I am thankful we get to do something normal,” she said, recalling the oddity of playing volleyball while masked. “This feels like a normal track season.”

Colombo will rejoin the cheer squad then graduate from NHS this summer. She will attend Bellevue College near Seattle to earn credentials to become a radiologic technician. Continuing javelin at college isn’t even a middle-burner idea.

And her loss of the chance of standing higher on a state high school podium — likely twice — is tempered by genuine enthusiasm that other Comets will soar.

“In my sophomore year, I didn’t realize it was going to be my last year at state,” Colombo said, seeing junior Josh Chadwick taking a breather after two hurdle races in which he placed first and second.

“Hopefully, next year I will watch these guys at state.”