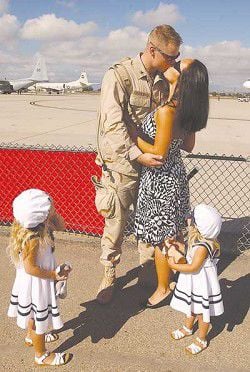 Kylee Tarabochia is the little girl on the left pictured in 2009. Her father, Jeff, spent 10 years in the U.S. Navy and was stationed in Washington, Oregon, California and Hawaii. Fast-forward to 2021 and Kylee’s planning on joining the Air Force after graduating from NHS next month. 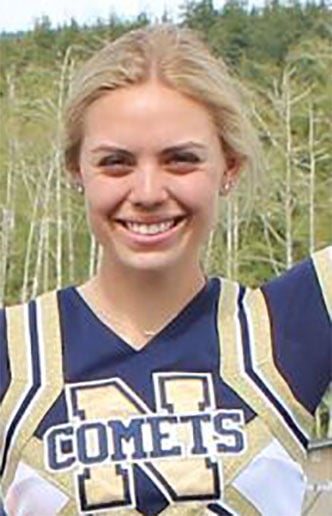 NASELLE — Kylee Tarabochia has traveled and lived along the West Coast throughout her childhood, a result of her father serving for 10 years in the U.S. Navy.

Now, the soon-to-be Naselle High School graduate is ready to set out on her own later this year — for San Antonio, Texas, where she’ll attend Air Force Basic Military Training. In the Air Force, Tarabochia hopes to become a loadmaster, the specialists who are responsible for properly loading, securing and escorting cargo and passengers throughout the world.

Along with providing a break from traditional schooling and heading off to college, the opportunity to travel and meet new people are some of the reasons why Tarabochia was drawn to the Air Force, she said.

We are profiling a few south Pacific County seniors whose high school careers will be forever marked by the covid-19 pandemic.

“I want to travel, I know that, and [being a loadmaster] is a really good way to do that — and get paid to do it,” Tarabochia said.

Her father’s and other family members’ military service have also given her insight into what life in the Armed Services is like, and believes it’s something she’ll want to do long-term — whether as enlisted personnel or as an officer after receiving her college degree. The Air Force pays for a certain number of college credits a year, another enticing benefit for high school grads who aren’t looking to start college right after graduating.

While others might find journeying to Texas alone right after graduating from high school daunting, Tarabochia isn’t too worried about making the adjustment. After all, she moved nine times throughout her childhood due to her father’s time in the Navy, living in Washington, Oregon, California and Hawaii.

“I’ve traveled already quite a bit, and I like traveling. So I think it’s going to be fun, because I’m not married and I don’t have any kids, so I don’t have to worry about my family moving with me,” Tarabochia said.

While the weird scheduling and new requirements brought about by the pandemic have been difficult to adjust to, such as having part of her grade depend on remembering to check into class, Tarabochia ranks third academically in what principal Justin Laine says is a high-achieving graduating class.

Laine called Tarabochia an extremely hard worker both in and out of the classroom, and that one of the things that impresses him most is her tenacity and ability to challenge herself by taking some of the school’s most rigorous classes it has to offer.

“She is also one of our kindest hearted and most respectful students,” Laine said. “She always approaches those around her with a warm smile and pleasant greeting.”

Like many in her class, Tarabochia is active on NHS sports teams, participating in softball, volleyball, basketball and cheerleading, which she has done for the past two seasons. She counts her coaches among those who’ve left a positive impact on her time in high school, particularly Becca Wirkkala, her softball and volleyball coach — and cousin.

“She’s had a great impact on not just me but our whole team. And she’s made us not just better athletes, but people. She’s a good person,” Tarabochia said.

While there are plenty of on-court successes, some of Tarabochia’s favorite memories from high school are when she and her teammates were able to bond off of the court. In the summer, the volleyball team would travel to Lincoln City and rent out a large house for a couple of nights.

“It was team bonding. We’d go to the lake we were next to, and just hang out at the house and do a bunch of cool activities together,” she said. For basketball, the team had summer camps where they’d travel and stay overnight for four or five days playing against other teams, sleeping in classrooms.

Tarabochia has attended Naselle schools since eighth grade, providing for some rare stability after moving so frequently earlier in her childhood. She said she’s noticed herself mature over the course of these past few years.

“I feel like I make decisions more based on how it’ll affect me in the long run, not just this year,” she said.

For Tarabochia, the long run looks like it has a lot in store.