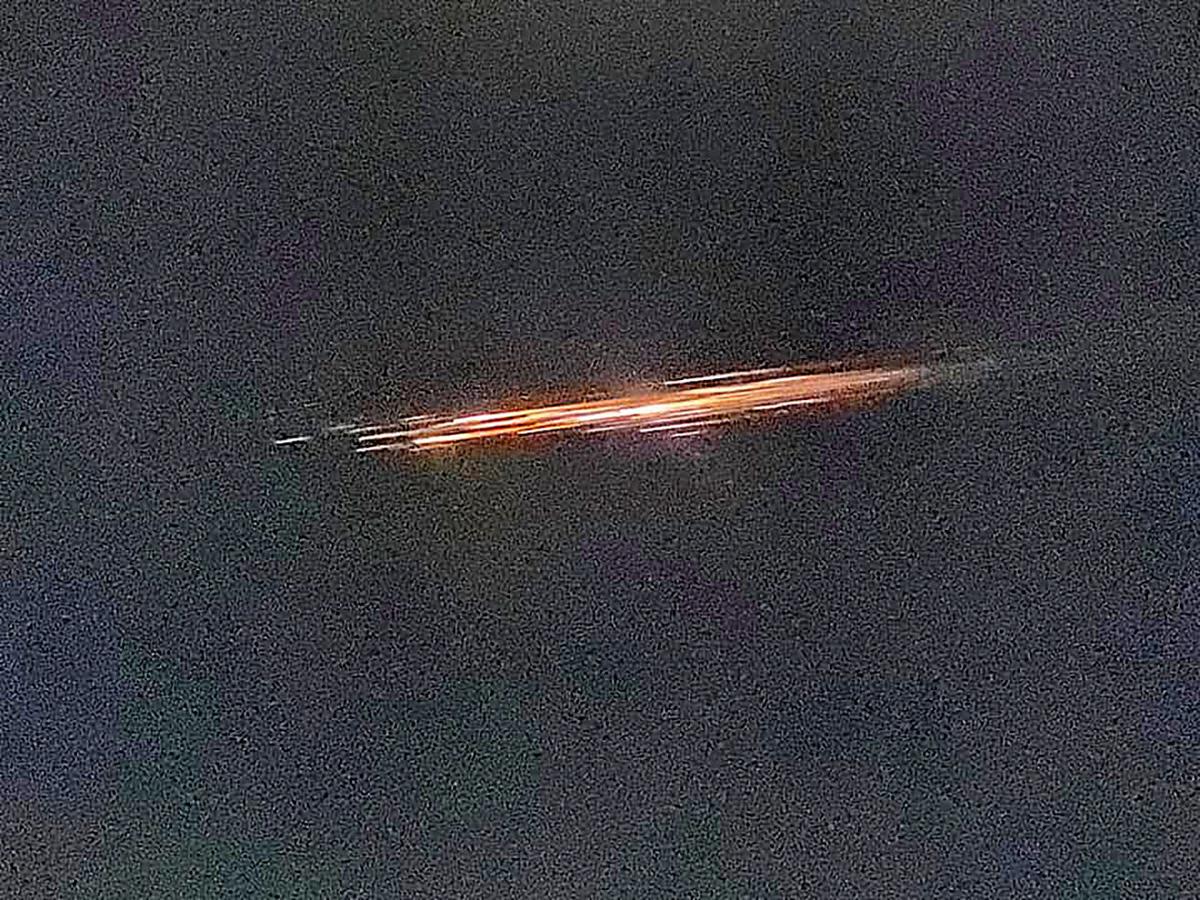 “It was unbelievable,” said Sarah Rhein, who took this photo near Bolstad beach approach. “Pictures just don’t do it justice.” Initially thought to be a natural fireball, it was quickly determined to be part of a SpaceX rocket burning up in the atmosphere. 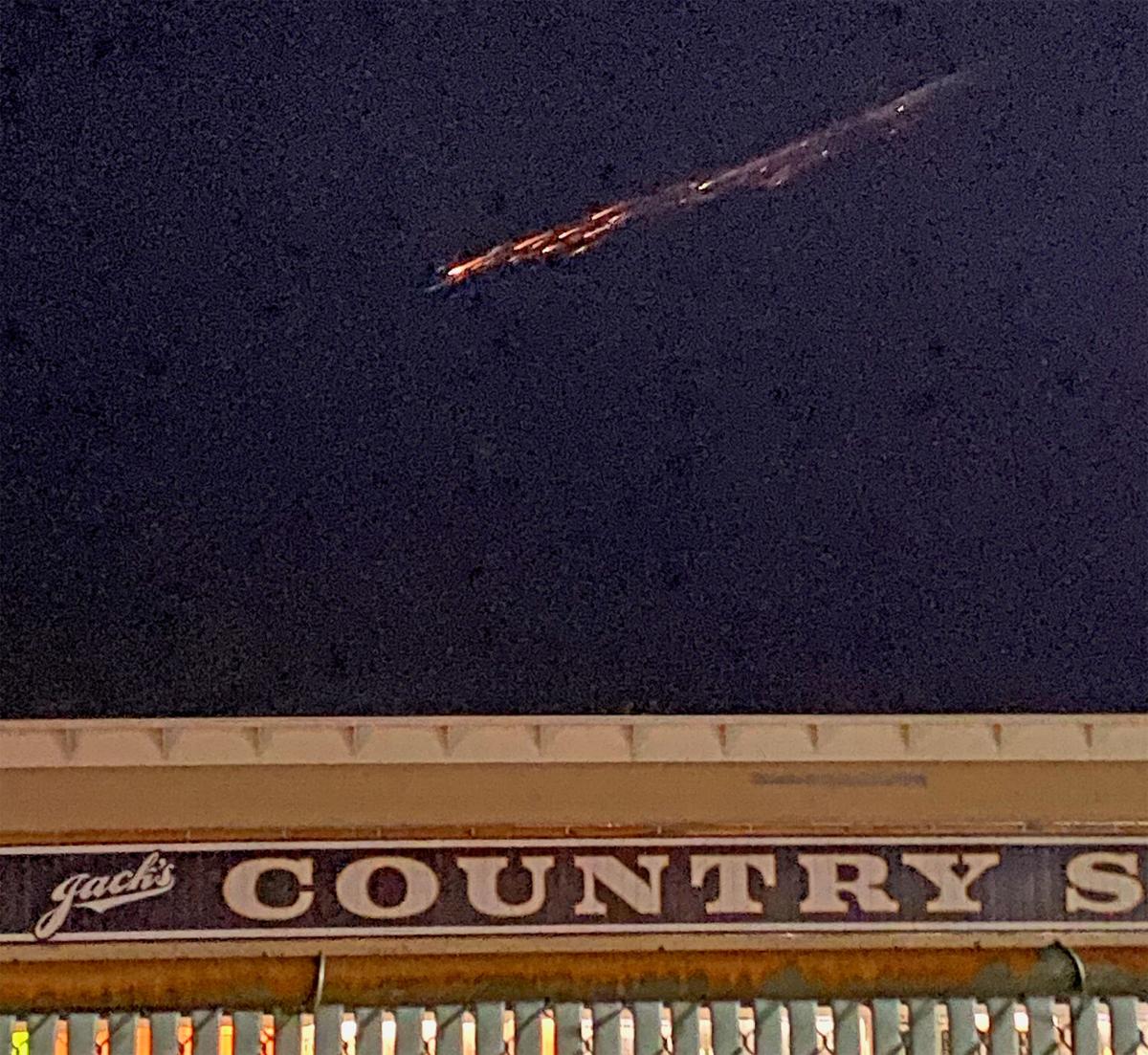 Brianne Cline photographed the space junk as it burned up in the sky beyond Jack’s Country Store.

“It was unbelievable,” said Sarah Rhein, who took this photo near Bolstad beach approach. “Pictures just don’t do it justice.” Initially thought to be a natural fireball, it was quickly determined to be part of a SpaceX rocket burning up in the atmosphere.

Brianne Cline photographed the space junk as it burned up in the sky beyond Jack’s Country Store.

Observer contributor Jeff Clemens was among many in the Northwest to personally witness the fiery destruction of a rocket in the evening sky last Thursday.

Was it a plane? Was it a helicopter? What in the world was that? Those and many other questions were on the minds of Pacific County residents who witnessed a spectacular display in the night sky on March 25 at around 9 p.m.

Living in Raymond, I reside along the regular flight path of Lifeflight and other helicopter ambulances. So a bright light in the night sky isn’t a strange thing to see and is usually accompanied by an engine putter.

Typically as the usual curious journalist, I will walk outside to hear the helicopter fly overhead, but this time as I spotted a familiar light in the sky, I asked my wife to peek. As she went to the window and looked out, she didn’t say a word, and at my urging, went out the front door and immediately said, “What the hell is that.’

I, of course, jumped up and ran out the door and what I saw was something you only see in movies. Off in the distance to my southeast was a very bright light moving to the northwest, and as it reached the middle of the sky, it appeared to break apart. The only way to describe this is to imagine the biggest firework you can think of, and that’s what I and everyone else who was fortunate enough to see it saw.

The object broke apart and flickered, sparked with dazzling flashes, and lasted several minutes as it moved northward. Reports came in from across Washington state and throughout Oregon of residents witnessing the unbelievable experience. Dozens of Pacific County residents have also reported first-hand accounts of the spectacle.

Others were puzzled, too

Many theories quickly came to residents’ minds with assumptions it was a meteor, UFO, missile and many other thoughts. Depending on where the object was seen offered a different perspective of what it could have been.

“I was traveling east on Sid Snyder Road at exactly 9 p.m. when straight in front of me I saw what looked to be a gigantic crane in the sky, [and] all lit up with lights,” Hilarie Friddle said. “Most lights were bright yellow in color, but some of the ends were blinking red. I was hoping that I would be able to view from it a different angle when I turned right onto Sandridge Road to head towards the light, but it descended below the tree line just before I came to the stoplight.”

The first official assumptions were that it was a massive meteor that broke apart upon entry into the atmosphere leading to questions of whether or not it hit the ground and, if so, where? However, the answer to the question was an unusual one, according to Pacific County Emergency Management Director Scott McDougall, who was indeed bugged by this pesky journalist immediately after the sighting.

After hearing a first-hand account of the incident, McDougall reached out to multiple sources across Washington and Oregon. He was informed by his counterpart in King County, who spoke with both the Federal Aviation Administration and agencies, that it was likely a meteorite.

“We know it was something at an atmospheric level,” he said. “It was seen in King County, and it was seen all the way down into southern Oregon, and everybody is reporting pretty much the same phenomenon [as has been described]. Lots of sparks, and it looked like something was breaking up in the air, and it was probably a meteor or something of that nature hitting the atmosphere and breaking up at a very high level.”

McDougall called back a short time later and reported that an astronomer in Oregon, who verified the phenomenon, confirmed that the object was in fact not a meteor but was instead a rocket, part of a SpaceX Falcon 9 rocket, that reentered the atmosphere and failed its de-orbit burn.

“I called the Long Beach Police Department at 10:33 p.m., and they indicated that they had already received multiple calls about it tonight,” Friddle said. “I asked [if] it was, and they said that they had been informed that it was a ‘satellite.’ The dispatcher could not tell me who informed them of this. I laughed and hung up.”

No precious metals will be searched for this time, darn.